Game 4 of 9 in the Longstreet ACW campaign, with the Rebs on the advance, again, this time the random scenario was the Railway Embankment. So my brigade would have good defensive positions to hold, but with 10 stands left off-table as reinforcements, it would be a hard fight against an outnumbering enemy for the first 6-7 turns. For my reinforcements, I chose the my poor and gutted infantry units, 3 of them with just 2 stands left, so it wasn’t much to write home about even when it did arrive, still it left my best combat units up front to hold the line, and I had special task in mind for my cavalry, which would normally be the obvious choice as reinforcements.

Having set-up the tabletop terrain, it came down to the Rebs to chose whether to attack or defend, and they opted to attack. The battle would devolve into 3 separate engagements, on the right, on the left and with the main Reb attack up the centre. My defensive plan was not to be completely static. My cavalry would be on my left with orders to rush forwards take the walled paddock in front of the embankment, dismount and turn its walls into a redoubt that the Rebs would have to deal with, or it would provide enfilading fire along the line into their centre into his main attack. The rookie cavalry would be out front alone, as a forlorn hope. In the centre was my largest unit, 10 stands of recruits backed by my largest artillery battery covering the approach up the lane. On my right, my ‘old reliables’, the 22nd Ohio had the duty of holding out, backed by just a single cannon. It was weak flank, but my veteran farm-boys were the best I had to hold it.

Drums and whistles playing, on came Jonny Reb, up the slopes of the ridge to take the high ground and deploy his artillery (most howitzer) batteries, along with his artillery officer adding to their accuracy. Being out shot by the Southerns is a rare experience for the Union, my artillery has so far suffered in the campaign, a deliberate policy by the Rebs to target it and avoid me getting a big advantage here, as I have in past campaigns.

And so, battle lines drawn, in the grey-coats came, on my left there would be a protracted fight for the paddock, which the green cavalry would be driven out of, but not without inflicting equal losses and stalling any threat to that end of the line… but it was only really a feint attack by the Rebs, a side show to the main attack. Stalemate here and both happy with that result.

On the right his veteran cavalry, in column, were a flying squad as they tried an end-run, and I had to redeploy to face them. It cost me my cannon, but the Ohio boys stopped his veteran cavalry, which dismounted and fought it out in inconclusive volleys. Holding here too.

In the centre, on his attacking infantry came at speed, supported by bombardments from the ridge above, but my good cover made his artillery work hard, and with little effect. My return cannon fire was equally ineffective - but could my rookie infantry hold in their first fight? Behind them was the objective, if they were driven back, he’d have it, and that would be the battle lost. The battle would decided in the fight across the bloody lane, in the centre.

Here are some pictures of how it all panned out… 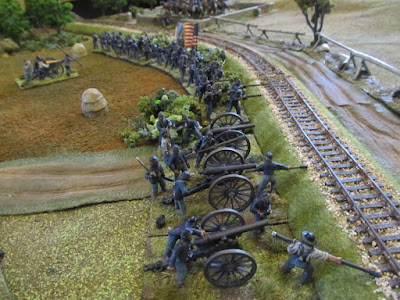 The Union centre prepares for the coming assault. 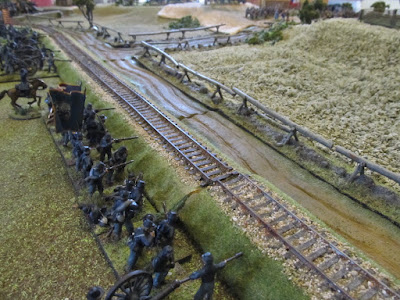 The short line on the right. Reliable Vets with a Hero attached. Tough-nut to crack. 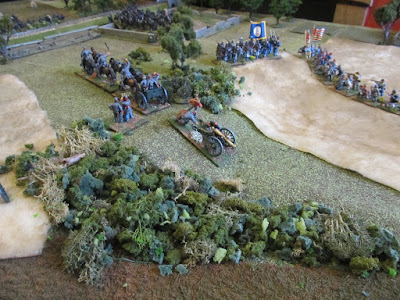 The Greys advance in columns, guns hauled up to the high ground.
The railway embankment is top left. 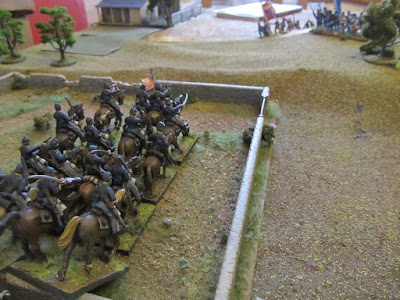 The cavalry move out into the walled paddock on the left. Enemy just appearing ahead. 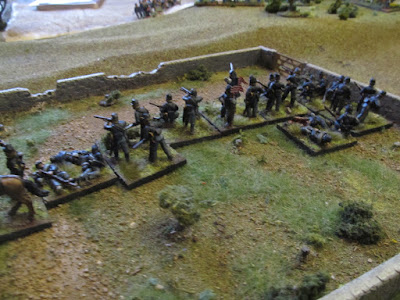 ... and they dismount to fight, winning the race to the good cover. 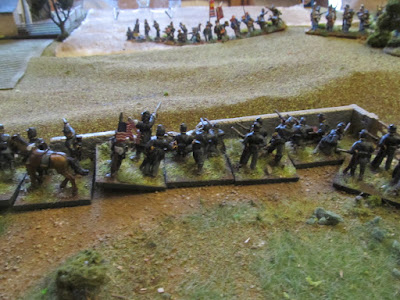 The Rebs appear, forming line from their marching columns. Here we stand! 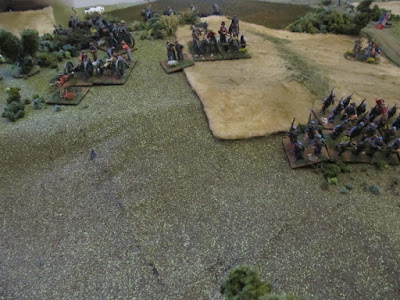 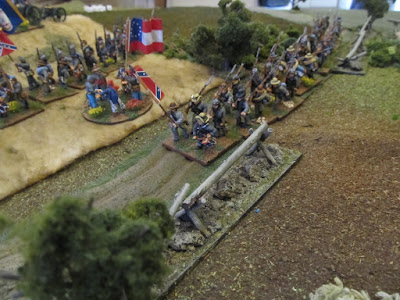 The main attacking regiments en route, with incoming cannon fire landing around them, to no effect. 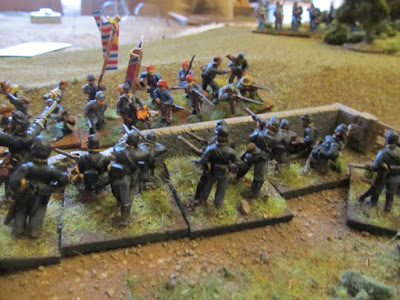 With a Rebel Yell, the enemy charge with bayonets and drive the dismounted cavalrymen back from the wall and across the paddock. 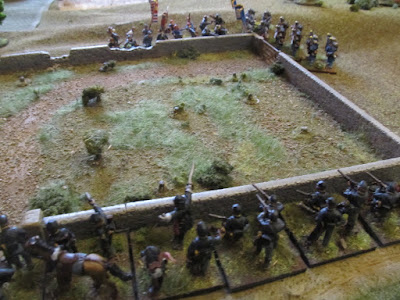 Behind the other wall, the cavalry regroup and continue to exchange volleys. Both sides are happy to hold their cover and shoot it out for the rest of the battle. The end of the sub-battle for the paddock. 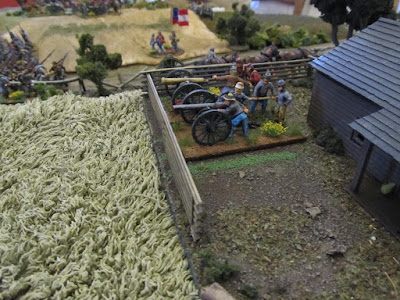 Reb guns in the hilltop farmyard, firing down on my left, but the embankment saved my infantry from any losses. 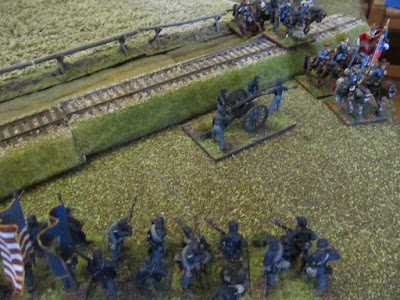 The Reb cavalry try to get round the right end, but a quick repositioning halts them. The single gun would be overrun when the cavalry dismounted to fight. 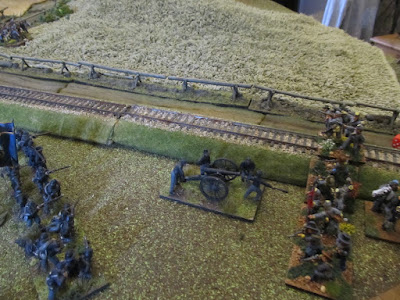 The skirmish on the right ends in stalemate. 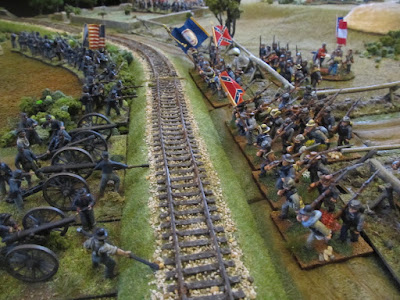 Bloody Lane fills with charging Rebs, facing canister and mini-balls at short range. They storm over the embankment. But they are thrown back by heroics by my gun crews and my rookies. 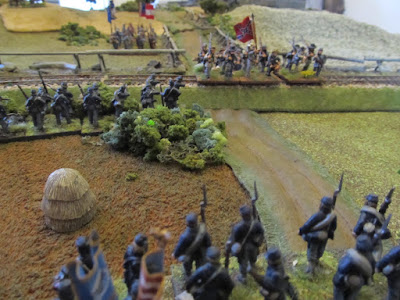 A second charge overruns the guns this time, but Union reinforcements have just secured the objective behind and open volley fire. The rookies on the embankment have driven off their attackers for a second time. The casualties taken here would just break the Confederates for today. A narrow win - phew!

First win of the campaign for the blues... but again very close, I lost 11 stands to the enemy's 12... so very even. A good tactical game... with Longstreet rules again shining, allowing for the tactical nuances, and still throwing flies into the ointment to frustrate. Could easily have gone the other way today.

That's it for this year, the ACW campaign will continue in January, reaching the midway point. Atm the Union are ahead in the campaign on Epic Points, but only 16 to 15... so all the play for...