Soldiers of God, Out Now! Hurrah!

The game has now hit the stores, available from North Star, Warlord Games, Gripping Beast, Plastic Soldier Company, and Perry Miniatures will be stocking in a couple of weeks (busy men the twins, but I'll catch-up with them eventually).

Ran a game at Gripping Beast last week, a rather stonking Saracen win, with some seriously good dice rolled by Darren and Martin never getting a break. You know it's not your day when the enemy plays 'Confusion' and takes the great card you were about to play off you. Martin did well not to cry.

Initial responses have been excellent. I've had a first battle report sent to me, another crushing Saracen win... but the guys playing down at Entoyment in Bournemouth loved it and are now furiosuly painting Arab infantry.

I'm pysched for game myself... time to play and Crusaders and show the infidel some real steel and holy fury. I'll play the game as a intro-session and write it up for new players (or prospective ones) to read up.

Articles for the game will be appearing shortly in WSS and WI magazines, in the next few months. A scenario for the Battle of Arsuf in WSS, a basic intro to the game in WI. Hopefully, a tactics/ how to play article will follow in WI too, but I'm still writing it.

For the hell of it, here is the game's advert. Please feel free to spread it (and a good word) around the internet, on forums, blogs, etc, word of mouth is the best form of promotion and I can't really get involved in that, mainly because I obviously think the game is ace, or I wouldn't have published it. 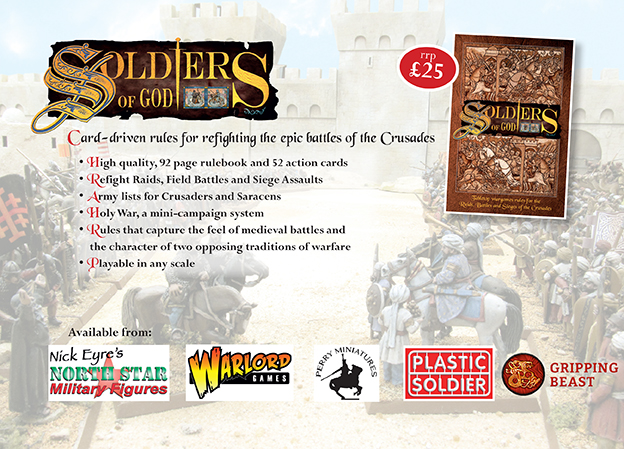