Mid-1863, with the Hill Top scenario, and, having lost the roll for Scouting, I (the Union) would be attacking. The Rebs would be on the high ground of Mellor’s Ridges, deployed to hold both objectives, strongest on their left (my right) with two veteran infantry regiments on the forwards slopes and cannons above on the hill top. He also had 2 cavalry units as his mobile reserve. These, especially the largest one of 7 stands, right in the centre rear, behind the ridge, were my first problem. Unable to touch them with my guns, any direct assault in force enough to carry the objective would bring that unit as reinforcements, either with a spoiling counter-charge to stall my attack, or as extra veteran dismounted infantry. Where ever I attacked would quickly get them, and shifting the infantry holding the objective would be hard enough work, the extra big cavalry unit would be too much. So, how to avoid this happening? How to remove his reserves and stop them holding those objectives.

My plan was to launch a strong enough distraction attack to get the reserves attention and draw them out of the main battle. Looking at the deployment, surveying the ground for the day’s assault, I decided his left was strong, and therefore would not be the main target, I’d go for the objective on my left instead, in force, and only demonstrate on the right. I’d use my cavalry for end-runs on both flanks (the joy of two cavalry regiments, the first time I’d ever had this option - well worth the painting time over Xmas to get the second regiment ready for action). The best unit would be on the extreme right, where undefended woods ‘blocked’ the route, but if you’re willing to pay the cost in action cards, woods don’t slow you down in Longstreet. I’d just pay, move my best cavalry, the 12th Maine, (Eager Veterans and Old Reliables!  – like the special forces of Union cavalry), in column, galloping at 20”  per turn, they'd be through the woods and behind the hill and its defenders in 3 moves. Just go-go-go, at full speed. With only his outflanked guns on the hill top objective, he’d have to use his reserves to answer that threat, or lose the objective to my sabres-out charge (once my cavalry had changed formation for action not fast movement).

To stop his infantry interfering here, I’d use my best infantry unit to distract them, advance through the Mellor’s Farm cornfields, use skirmish fire (they have Sharpshooters attached so are best for the job anyway) and keep his best infantry busy enough for the cavalry to do their thing behind. That way, his mobile reserve veteran cavalry would be his only option to respond.

With the plan for the right decided, I piled everything else into the left assault, 3 infantry regiments and my largest gun battery, which would first have to be towed up onto the high ground, but could then use their rifles across the shallow valley for counter-battery fire against his howitzers on that objectives. My accurate guns could win that dual.

I thought my 3 regiments, including my Zouaves, would have enough weight to overrun his blocking regiment and my second cavalry could get round the extreme left flank, meet his second, but far smaller, cavalry reserve at the charge, win, and be on the objective, winning me the game. Deployed, orders issued, all was set for the assault, and my heavy rifles opened up the day’s blood-shed at long range with counter-battery fire, long shots (literally), but out of range of his return fire. If your artillery out ranges the enemy’s, use that range, artillery officer’s 101. I can hit him, he can’t hit me.

Time to sound the bugles and go. Here are some photos of the action. 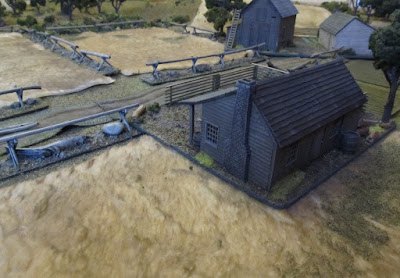 My right, the ripe corn of Mellor's Farm, merely a demonstration attack here. 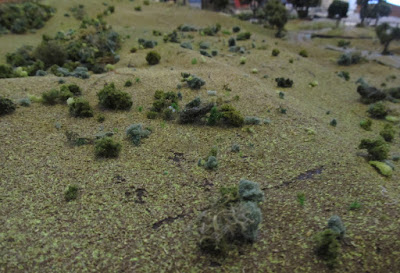 Mellor's Ridge, before the Reb's arrived to secure it. 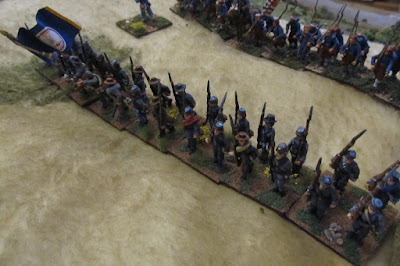 and here they are, two units of veterans in the cornfield on his left. 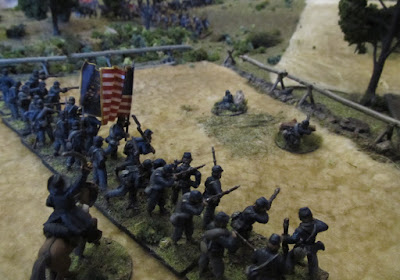 My Ohio-boys moving up to engage them. Sharpshooters out, Hero (on horse) attached.
It would be skirmish fire here unless we got close, and I had no intention of getting close. 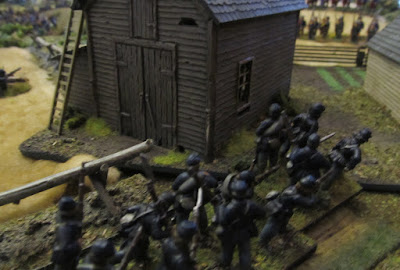 All that is left of the New York Irish, 3 stands, up the lane into the farm,
to help out the Ohio boys as best they can and try not to get involved in any volley firing. 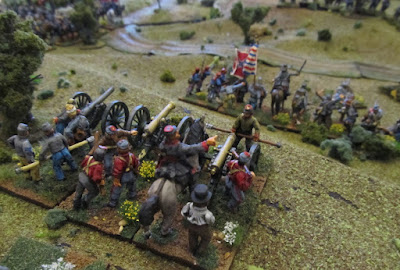 On my left, Reb guns on the hill top objective, infantry down on the slopes below.
This was the priority target of my attack, win here and win the day. 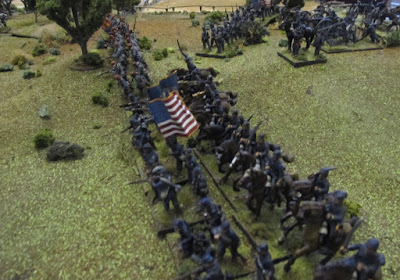 The Union main force deployed for that assault on my left,
after the supporting guns got up to the high ground and deployed from their limbers. 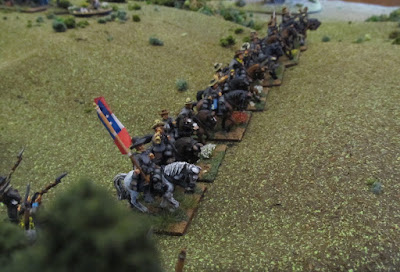 The big Reb veteran cavalry reserve. They could be anywhere he needed them,
to charge or dismount and block my route to the objective. Wherever I attacked in force,
they would be... 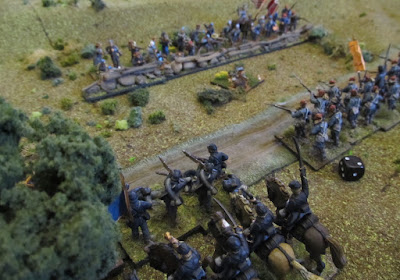 His veterans dig-in to face the Union advance, giving them a defended obstacle,
but they are badly outnumbered.  Zouaves into the teeth of their fire. More glory... 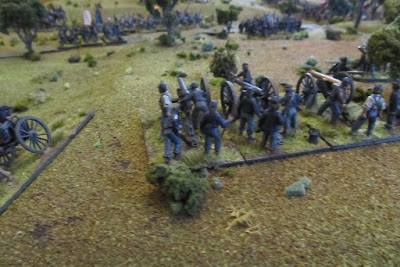 Supporting fire from rifles (and one Napoleon), target his artillery, and, when his small cavalry reserve rode up the hill to the crest, an accurate volley (good dice for once!) cut a swathe through them. 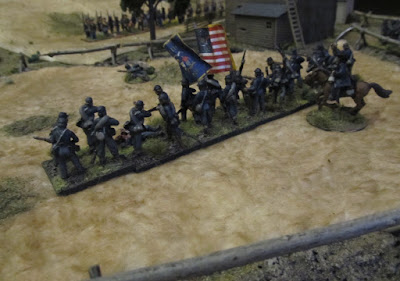 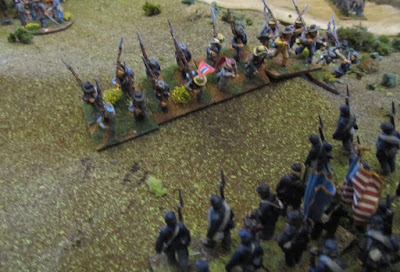 In the centre, my Pennslyvania recruits swing round the woods and attack his Virginian recruits,
and win, driving them back up the slope, and unexpected gain, but welcome. 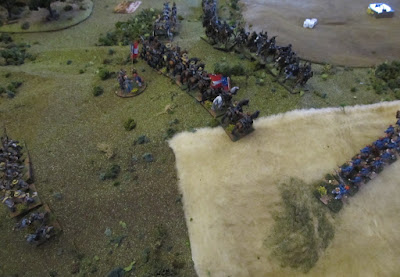 Meanwhile, on the right, the 12th Maine Cavalry are round the back, formed into line, and advancing up the rear slope. Here, they charged his outflanked guns and overran them, before facing the counter-charge of his cavalry, which he had to commit to save the objective. The plan worked... my cavalry would be driven back, but with only light losses, but his cavalry were fully committed at the opposite end to the field to my main assault. Mission accomplished. 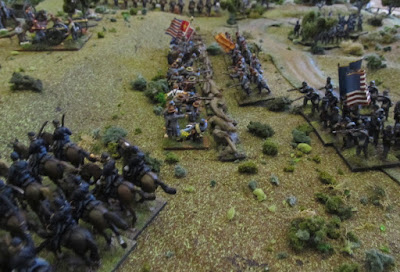 The left assault, cavalry are round again, and my infantry have bayonets fixed. The following charge drove the Rebs back, out of their defended obstacle.
The two guns (1 lost to counter-battery fire) turned to face the cavalry threat, but too late. 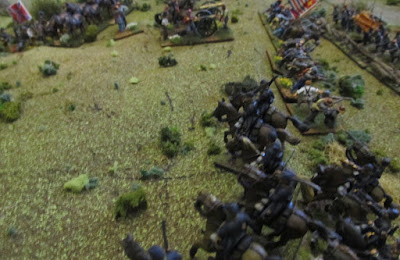 Here they come, my cavalry swing round as his own unit moves up, gets hit by my cannon-fire and are then decimated by my charge. Only the guns to hold the objectives. The gunners tried to hang on, but with my infantry coming up the slope as well, the situation is hopeless. 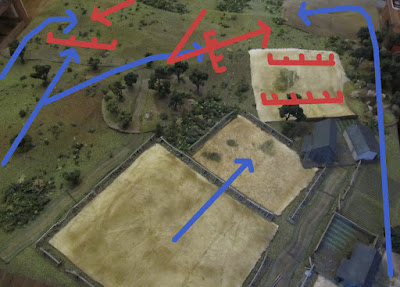 How it played out. Cavalry end run via the woods on the right gets behind him, whilst the Ohio boys skirmish in the cornfields. On my left, the main assault sweeps round against his weakest point in the line. His cavalry advanced, but then had to go back to meet mine.

That's the bones of it. Longstreet again shining, the cards were kinder today and my assault went, largely, to plan. It was bit of crushing defeat for the Rebs, the survivors streaming away down the hill. So, the campaign is now 2 wins each with 1 draw, so close. But I'm ahead on 'Epic Points' (a terrible name for the abstract concept that is the campaign's 'victory points'. Why not just call it 'Glory'. Whoever wins more 'glory' wins the campaign in the end.

Today, the glory was for the blues. Next time, its late 1963, and the Rebs will want revenge for Mellor's Ridge.

Warwick
I've been a wargamer since age 10, and have never really stopped. I now design, write and produce wargames rules. ATM I mostly play Battlegroup (WWII), Soldiers of God (Crusades), Longstreet (ACW) and other rules for bits and pieces I'm working on. Sci-fi skirmish, Soldiers of Rome, NorthAG (1980s).