The game had reached the critical point with the Russian all on the table, their artillery fire still roughly blanketing the far end of the table and the Germans in position to met them. The prelude was over, enough of the under-card, time for the main event...

The lurking OT-133 came out of woods and lit-up the farm outbuilding, toasting a German rifle squad, who had already pinned themselves trying to launch an AT grenade attack on the KV-1 parked outside, and bottling it. That pause now cost them dear. The Russian infantry tried to rush the farm from the woods in support to meet a wall of MG-34 ambush fire, cutting them down to about half strength in short order. Arrgh!, our big charge had gone, well… rather so, so, no great damage caused. 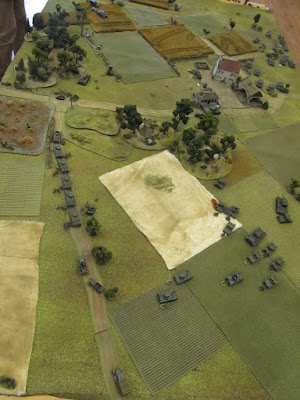 As it stood... Russians tanks on the way.

I immediately launched my BTs on their charge, tank riders still aboard (but not for long when they came under fire). The tanks covered the ground swift as greyhounds (not the armoured cars), fanning out, but their suppressing HE and machine gun fire did very little. On the opposite side the T-26s continue to mill about, trying to hit Pz IIIs ahead of them and failing. The return fire set a couple of T-26s alight though, the attrition had begun.

This they did, racing to the edge of cornfield (after the timed barrage had landed to little effect, the Germans knew where they were landings and now avoiding it), and again the suppressing HE fire was ineffective, leaving the Pz IV and anti-gun unpinned. I would rue that, as between the 2 guns they destroyed 3 BTs at close range, and  another died to a flank shot by the Pz II (somebody kill it!), 5 BTs down already… but commanding Russian tanks isn’t for the feint-hearted, take the loses and roll on!

The fight for the farm was still going Germany’s way too, although the KVs scored a couple of kills (KV-2 direct hit was the first PzIII in orbit!), but the enemy infantry were immovable, and close range MG fire even pinned the flamethrower tank, which was later assaulted with AT grenades and blown up - messy. 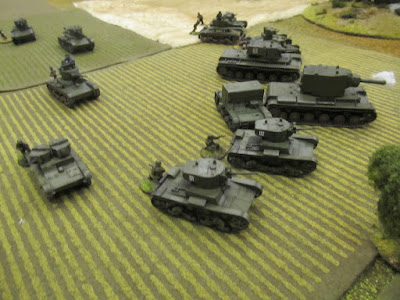 KV-2 re-arming (a lot) whilst the T-26s arrive and begin to duel with the Pz IIIs, well, those that have more than just machine guns. 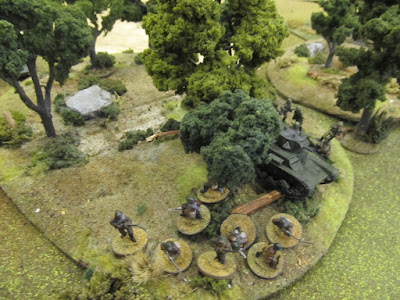 OT-133 and infantry lurk in the woods, ready to assault the farm. 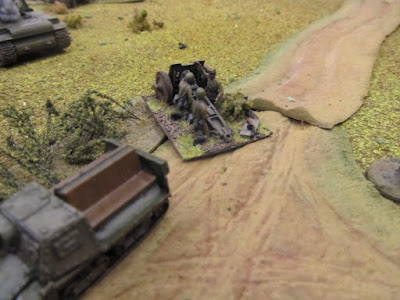 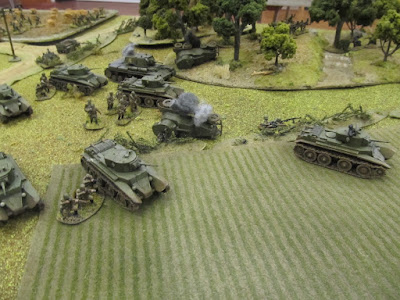 Stal! Stal! Stal! The BTs begin their run past the first Russian armour to come this way (KV-1 and 2 BA-10s, all lost), tank riding infantry starting to pile off. 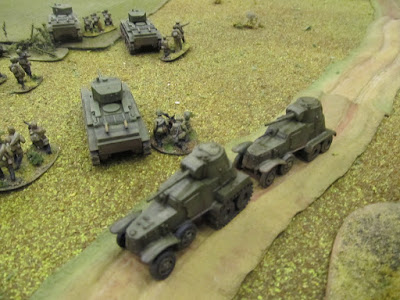 BA-10s returning from the farm to find an ammo truck, back up this lane somewhere.


The Germans had to respond, the 35(t)s swung right to engage the BTs across the table, scoring several hits but each glanced off (almost unheard of on BT-7s). One BT-7 was knocked out by 20mm Pz II cannon fire (these really are made of tin foil). Other tankovik squads jumped off as their tanks got hit, only for MG34 fire from 2 more machine guns to cut a swathe through them too… our infantry were getting pasted by waiting MG fire at short range - the wages of failing to pin those teams last turn. From the table's rear the German 105mm field guns took aim over open sights and pinned a couple of BTs with HE fire. My attack was taking heavy fire, but still rolling, the unscathed second wave of BTs wasn’t far behind and would take the lead next turn, racing past the pinned vehicles. 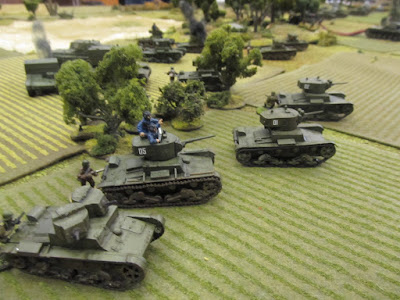 The T-26s close in (a bit), as the heavy fighting erupts around the farm. 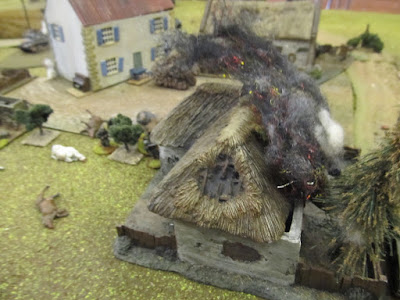 OT-133s handy work... burn baby burn... rude surprise for the Germans, not having clocked it wasn't another T-26. 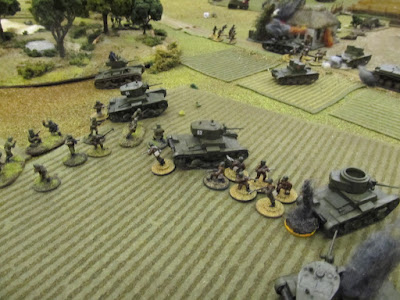 The Russians are coming... T-26s still closing... at walking speed.

It had become a desperate brawl, and then our orders gave out, rolling 9 on 6D6, no re-rolls either - ouch! My last BTs pushed on regardless, one scored a kill on a Pz 35(t), then another… but two more were lost to ambush fire, one to a direct 105mm HE shell hit (joining the Pz III in orbit). The tank riding infantry tried to assault German MG teams and usually failed their experience test, leaving them pinned to be gutted at point blank range next turn. Oh dear! 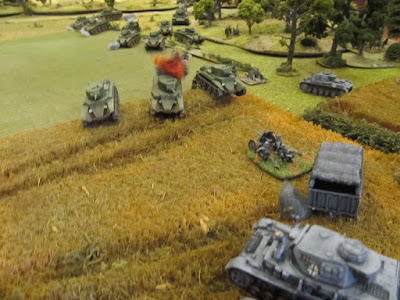 The Pz-IV and 37mm anti-tank gun dealing the damage in the cornfield. 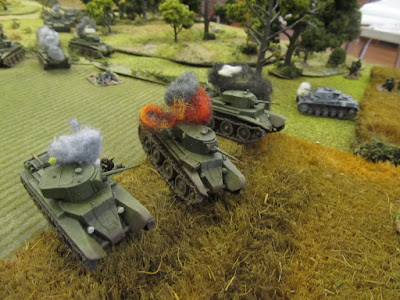 BTs burn as they reach the cornfield, Pz II on ambush fire behind. 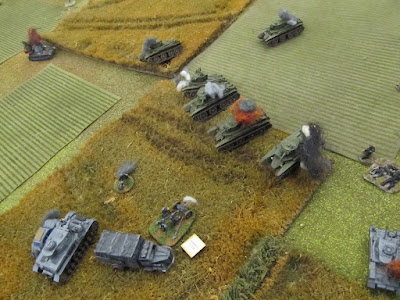 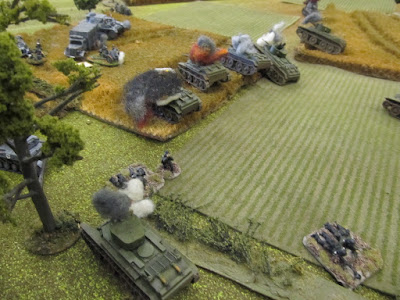 Hmmm... carnage. German MGs team still fighting... and still cutting down my pinned infantry in a bit of a turkey shoot.

But we still had more to throw at them. Two more BA-10 armoured cars, having been back to re-arm with a supply truck, rejoined the fray and added some more 45mm shells to the fusillade, scoring another 35(t) kill. Both sides were taking punishment, but in the slugging match the Russians were coming off worse.

The last BT charge, with just 3 runners left, didn’t get any further that the same cornfield again, were the Pz IV awaited on ambush and knocked them out again… it never misses or fails to penetrate!! Its crew had racked up 4 kills quickly and then turned their MGs on my infantry as well. I got his Pz II though with a point blank shot. My repair truck reached my knocked out KV-1 and set-to trying to get it running again. 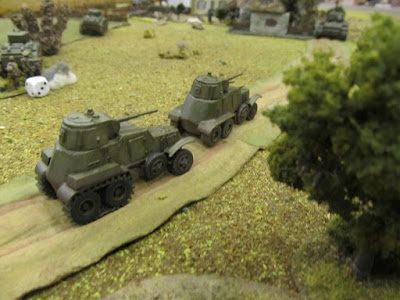 BA-10s, ammo'd up and on the way back into action. 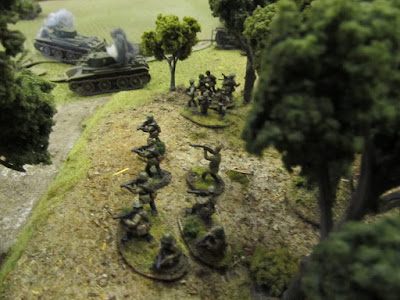 Reserve motor rifles in the woods, not much help to the tanks. 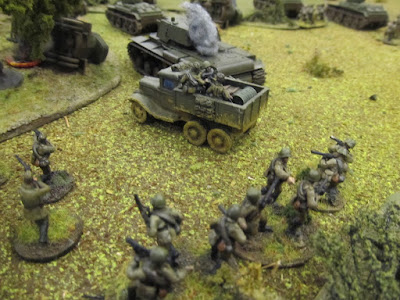 My repair truck gets to the broken down KV-1, but 3 attempts to fix it all failed.
Would have been nice and big help to the BTs, but I'm not that lucky.


My poor last BT-7 was forced to pull back, a few infantry fled back over the road to the cover of the woods again. The carnage had been swift… the German line had held out, my attack had been furious but futile.

At the farm, no better news, both KV-1s had been immobilised by breakdowns, whilst the KV-2 kept shelling away (on constant re-arms), but the T-26s had withered, a few MG-armed tanks and 37mm rounds was all that could be mustered. The Germans would not be moved from here.

Despite the losses, we weren’t broken yet, although it was only a matter of time. The battle sort of petered out. We fired off mortar shells at the farm, the last armoured cars fought on, they threw some mortar rounds back, and a Pz III rashly tried to take on the immobilised KV-1 at the farm and got itself KO’d at point blank range… but our offensive power had been blunted. It was almost 5 o’clock, and we agreed that even though it was the last turn both sides still had to take a chit to unpin…if they had any pinned units. That last unpinning chit broke us, taking us to a total of 103, 1 over our 102 total.

The Germans, well they had reached 67 from their 96. A solid victory in a cracking fight. They had scored 16 tank kills, with another 2 KVs immobilised. We had scored 9 tank kills. It hadn’t all been one sided, but my BTs lost 9 tanks from 10 in 3 hectic turns, and some people think the German can’t win (until they open fire obviously)! 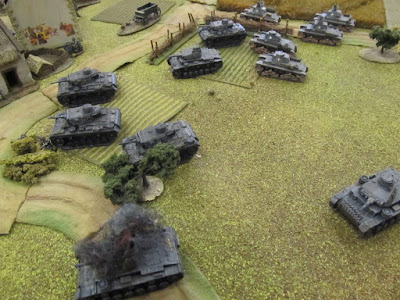 The panzer phalanx engaged with the T-26s and KVs, whilst Pz 35(t)s behind turn to cover their right from the threat of the BTs coming around the farm. 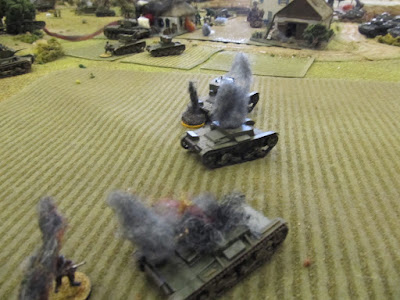 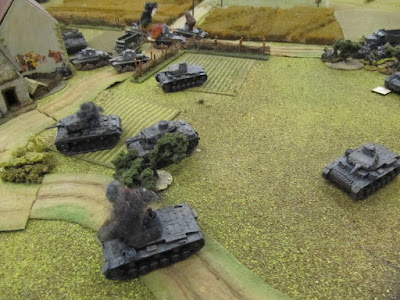 But it's not all one way traffic... mostly KV handy-work. 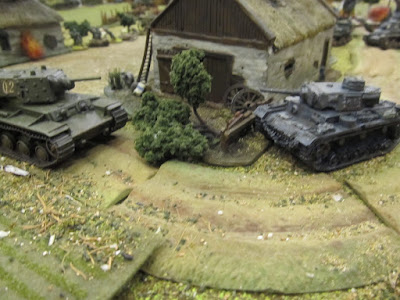 A bold Pz-III tries to take out another immobilised KV-1 at point blank range... klang!
Return fire got him. 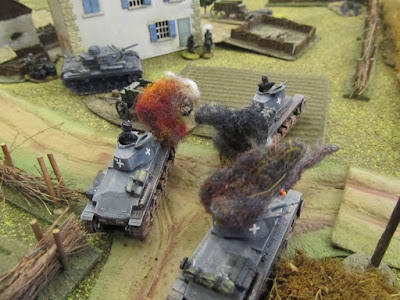 35(t)s unable to withstand even long range BT return fire in a furious exchange of fire.
The 35(t)s hit a lot, and failed every penetration roll they made! Even on 5s. 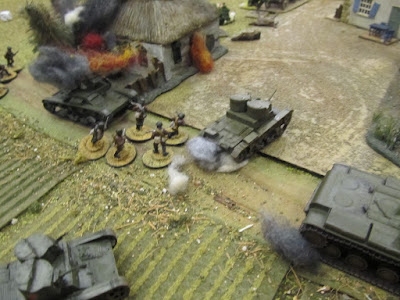 Last gasp at the farm, under withering defensive MG fire. 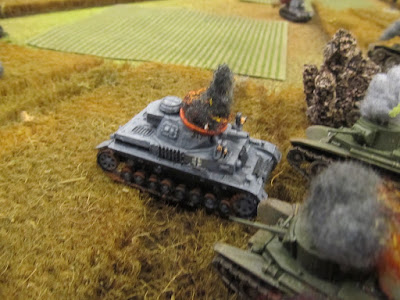 Petty revenge... the Pz IV that had caused so much damage, knocked out with a late minestrike chit. They drew it, rolled a 1, and we played it. Too little, too late.


Top Sunday fun, always love our big-bashes. After packing up we retired for a post-match debrief and a well-earned feed and brew. For the Russian commanders the gulag was waiting. We had made a few bad mistakes, the right pincer of T-26s had taken just so long and never got close enough to the enemy… why we gave them the furthest distance to cover, cross-country, I don’t know, the speeding BTs should have gone that way and T-26s could have used the farm lane to get forwards faster. Bad planning, and nobody’s fault but mine. The artillery plan had also been flawed. The constant harassment was merely OK, but we left it too long in one place, after 5 turns or so we should have changed the targets, not letting the Germans avoid our barrages so easily. The farm should have been a target, as looking back, it was obvious the Germans would get there first (we had further to travel in slower tanks). The KVs had been excellent, as expected, we’d only lost 1 (to a breakdown), I think we can see why the Russian stuck with those. An initial good start had not been capitalised on. My tank riding infantry had been badly wasted. Perhaps delaying the tank charge a turn to get them off, rather than allowing them to be shot off their rides would have meant they did something, beyond being pinned then shredded by MGs.

Lessons to learn, but in end, all that matters is it was good fun for all.

The post-battle debrief inevitably turned to thoughts of the next one… whispers in the wind were for a big desert fight, maybe Tunisia, as we have Brits, Americans, Germans and some Italians… and maybe a few French in the works as well (full house). Not sure we’ll have a table big enough for all of them… but we’ll try.