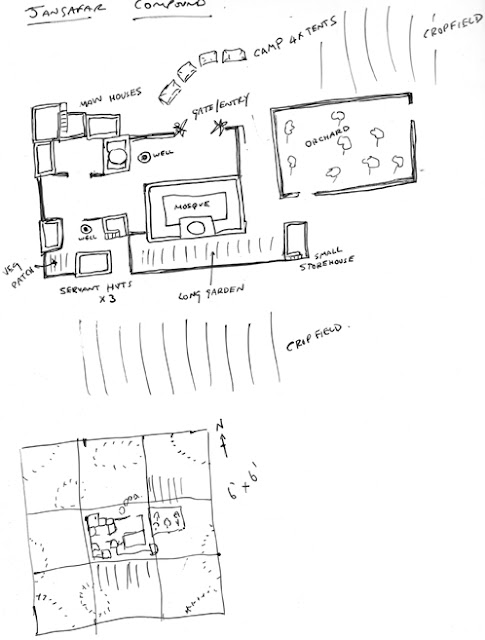 
This was a play-test game, at just 400 pts, it was on the small-size for a platoon action, played on a 6’x4’ table, but it is important that the game plays well at smaller sizes as well as on the more ambitious sizes we all like, because - as with this game, a lot of people play on a 6x4 over their kitchen table, as an evening’s entertainment. This was exactly that...

The game was a meeting engagement, with the SS panzers probing along a farm track south of Shopino, and my Russians intercepting them for a brief but fierce counter to stall their advance.

The 6 x 4, suitable for an evening's gaming. Russian entering top left, behind the hill, Germans bottom right. Here the first units have just moved on.

The German Panzer Battle Group consisted of: a squadron of Pz IVGs, led by a Tiger, a panzer grenadier platoon riding on the engine decks, a PaK40, the battle group commander in his 251, and a few upgrades for the grenadiers (to MG42s). Notably, it had no artillery support.

The Russian Rifle Division Battle Group consisted of: a platoon of 3 T-34s and a single lend-lease M3, with a rifle platoon tank riding, supported by a battery of 2 Zis3 guns (with no tows, which I suffered for), an NKVD officer (who turned about to a Vodka-soaked incompetent), an OP team spotting for 2 on-table 82mm mortar teams, and a timed air strike from an IL-2 to arrive on turn 6. I also had a counter-battery fire mission (which was now useless), and single sniper, hiding out covering the road.

The Russians won first turn and began to deploy, gun crews manhandling their anti-tank guns cross-country very slowly, to get them into position to cover the road. 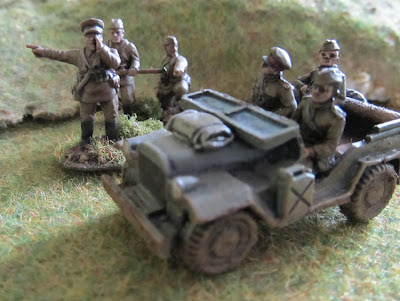 The NKVD officer arrives, but was less than inspiring. 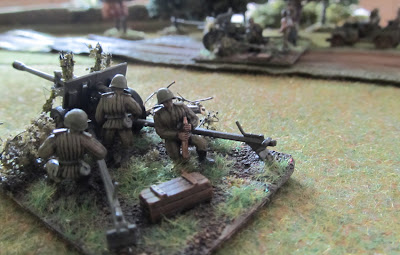 The Zis3 battery having been hand-pulled in position, only to be out-manoeuvred by the panzers.

The Germans arrived quickly (maximum 6 of a D6 units), tanks, commander and grenadiers all pushing hard towards the farm buildings in the centre.

Turn 2 saw a few more Russians arrive, my OP team and the mortars set up, along with the NKVD officer urging everybody to greater acts of patriotic bravery (and judging by his effect on my morale, being ignored!). 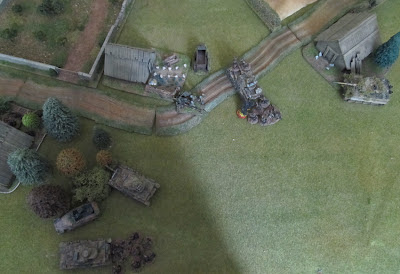 The Germans win the battle to 'be there first with more' and take the hamlet. 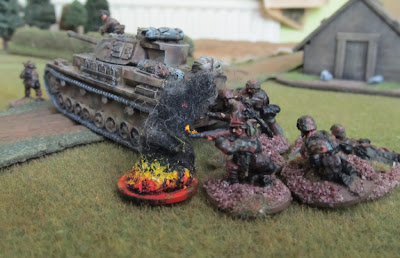 Panzer Grenadiers pinned by sniper fire, hide behind their ride. 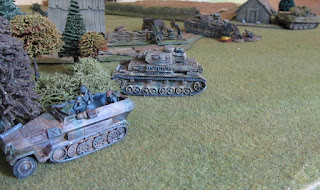 Panzers on the roll. The commander is in his 251 is skulking behind the woods.

Again the Germans (with alarming efficiency), rolled a 6 and their entire force was suddenly on the table and advancing at my rather thin lines, I was already in a bit of trouble, with panzer grenadiers now on 2 of the 3 objectives, and their MGs all set-up and waiting.

Still the Russians failed to show in any great numbers, but at least my tanks started to arrive, mustering behind the hill, out of site of those long German guns. An early exchange of fire saw his PaK40 pin one of my Zis3s (which later got its own back by sending an anti-tank round clean through the PaK). Then I got things rolling as the 82mm mortars opened up a barrage on the buildings, pinning 3 units with accurate fire. 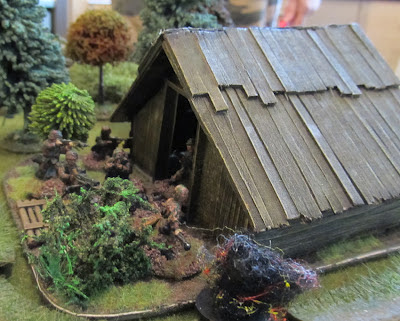 Grenadiers occupy a building, and get the full force of a mortar stonk.

By turn 4 my forces had finally arrived, but I hadn’t got far from my table corner. The painfully slow Zis3s where waiting on ambush fire, covering the road, but the Germans tanks just avoided it, dividing into two small units of 2, one going left, the other (including the Tiger) going right. My sniper scored an early success pinning a grenadier squad, only for the Tiger’s Mgs to light him up in return – scratch one sniper! 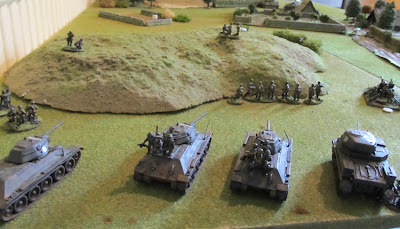 The Russian armour waits behind the hill for the order to charge. On the hill is the OP team for the mortars and the rifle platoon HQ, soon to be wiped out by MG fire. 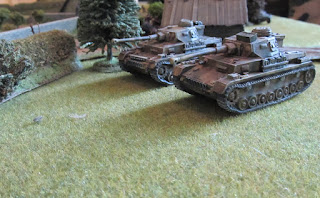 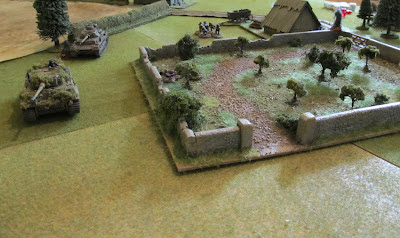 Going right, the Tiger leads a Panzer IV past the orchard.

I dismounted my riflermen and tried to push them forwards, only for MG fire to blaze away, killing 3 men in one squad, then wiping out the platoon HQ (scratch one officer). My tactical position was poor, the Germans had all the angles covered, but mercifully my mortars kept hitting the buildings, and kept pinning his Mgs. One 82mm direct hit came within a  whisker of destroying his commander’s half track (needed a 7 on 2D6, rolled a 6 – drat). By turn 5 the German tanks had begun to open fire too, pinning my mortar OP and halting the battery’s fire. I was just waiting for my air strike before launching my tanks into a speeding counter-attack. As the IL-2 raced in low, dropped its 4 bombs and pinned the Tiger tank, its supporting Pz IV and a grenadier squad, that was the signal for the T-34s to fire up. Stal! Stal! Stal! All 3 raced over the hill, HE rounds blazing, safe from the pinned Tiger’s lethal gun – I thought. 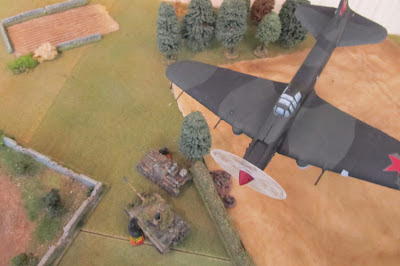 The IL-2 air strike, pinning the Tiger and Panzer IV. 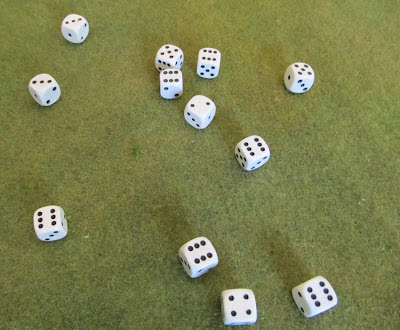 The dice roll of execution. An rifle squad is wiped out by 8 5-up hits on 12 dice from an MG42 team.  Today, fickle lady-luck had joined the cause of fascism.

But no, the German commander used his tactical co-ordination special rule to unpin the beast, and it cut loose at close range, scratch one T-34, then another. Mg fire then cut apart the surviving tank riders jumping clear of the burning tanks. Disaster! The sole surviving T-34 swung hard left, then right to get a side shot at the Tiger, which hit but bounced off, and in an attempt to get my mortars back in play I pulled a 4 counter, which broke my battle group. Eek! With the German panzers remorseless rolling on, my sorry survivors quit the field (and the NKVD officer shot himself), leaving one more village in facist hands! 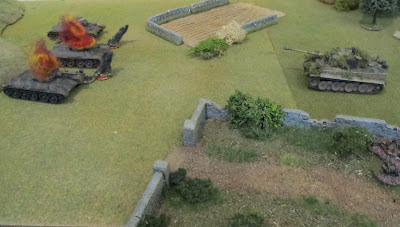 The T-34 charge ends abruptly in disaster, from the Tiger at close range. 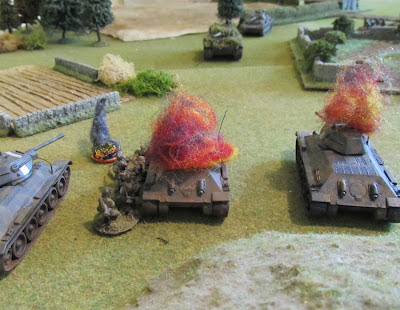 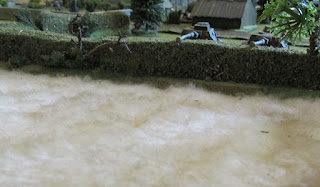 The other Panzer IVs have the cornfield covered, their MG fire pinning my infantry crossing it.

It hadn’t gone well, but there were some mitigating factors. The last 5 counters I pulled were 4 4s and a 5, costing me 21 battle rating! Up until then I only lost 8. In a small game no force could take such punishment. Also, I can’t roll a 3+ to save my life when I need to. I was unlucky not to kill his forward commander, which would have cost 2 counts, reduced his officer rating by 1 and, critically stopped him using tactical co-ordination to get his Tiger unpinned at the vital moment when it looked vulnerable (if they ever do). Somedays, lady luck just isn’t home... 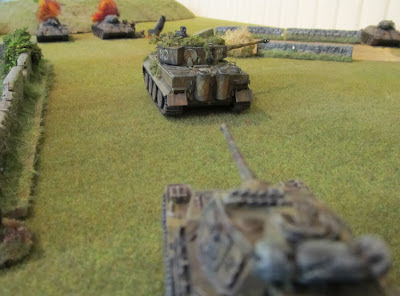 Final positions, the Tiger takes aim at the last T-34 having resisted its side-shot, but the shot was not required. 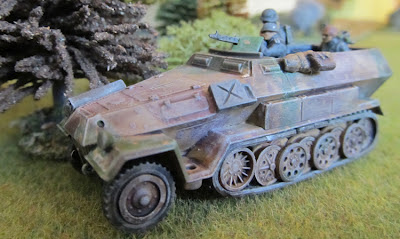 The German commander can report his objectives secure, the advance on Shopino may continue.

For those on various forums, or subscribed to the Plastic Soldier Company newsletter (if not why not?), this blog won't come as news, but here is the new flyer from PSC. The project is still on-going, but it has kept me very busy for the past 6 months. I've also included a sneak peek at one of the photos from the book, to wet a few appetites.

More will follow... oh, and if you want to find out more, see the game in action, or just come and say hello, I'll be running a small demo-game (against Peirs Brandt) at Battle Group South, Bovington Tank Museum, July 7th-8th, at the PSC stand. My heroic Russians shall be taking on his hated facist vipers (sorry Germans) across our new (and very nice) display board. Forward to Berlin! If not, I'll be the tall, bearded guy with a baseball cap wandering happily amongst the tanks. 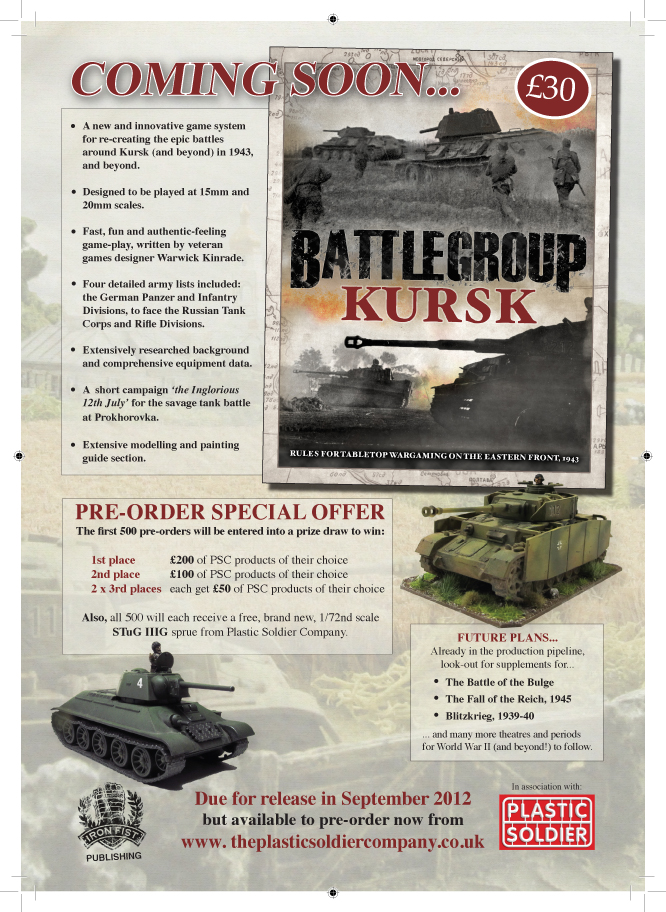 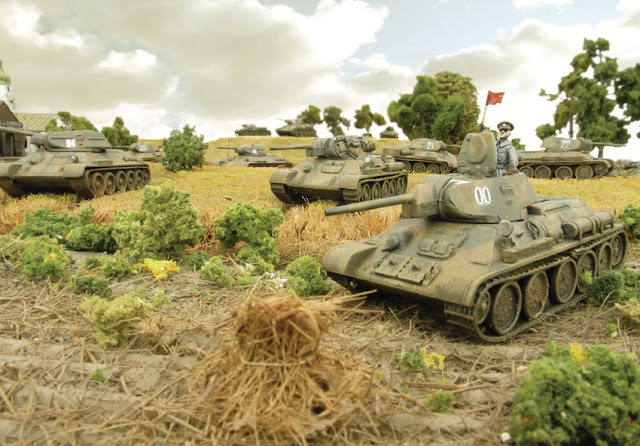