The sixth of the Konigsberg campaign games saw the Germans attempting a break-out scenario during a nightfight, with the top Nazi and SS officials, and a lot of other men too, trying to escape the surrounded city. The game would take place in the industrial district of Kosse, on the banks of the Pregel river and along the main road west, the Holsteiner Damm (where 2nd Panzer Division are not too far away).

The German force was very infantry heavy, 2 platoons, plus an extra auxiliary squad (civilian staff), a veteran SS grenadier squad, pioneer squad and bicycle fusiliers too. They were supported by a StuG, a 37mm cannon on a heavy truck and a SiG33 for artillery fire. The Goliaths were back, 2 of them with their controllers, sneaky! They also had +3D6 to their BR (9 was rolled) for ‘Backs to Berlin’, ‘To the Last Bullet’ and an SS field police team. These would be very determined (read desperate) Germans.

My exact Russian forces are listed below.


With the night fighting rules in play, the game was a different one, with everything out of range and LoS to start with. Good job, my entire deployed force was 2 units (on 2D6), both the Zis 3s (lacking tows otherwise Id have to drag them into positons). The rest would slowly arrive from turn 3 onwards.

The plan was to have 1 platoon and support on the right blocking the buildings and Holsteiner Damm, with a second on the left, covering the open grass area. The third platoon would be in reserve in the centre, on the table edge, a last line should the Germans get through. Each platoon would have a sniper, a Zis3 gun and a tank (or 2) in support.

The German advance was swift and their reinforcements arrived in good numbers. The leading infantry squads made their sneaky way through the tangle of rubble and buildings to close in on their objective, escape off my table edge.

Well, the first Germans crept forwards and the Russian infantry did likewise, a few leading infantry squads that got the jump on the Germans and as the DPs, rifles and PPSHs blazed, caused a few losses and got the Germans well pinned down. The leading veteran SS guard squad, super-aggressive, immediate unpinned (with tactical co-ordination) and assaulted one of my squads, only to be fought back, with strangely few losses on both sides. Trapped in alley, a second Russian squad then wiped the Nazi’s out.

With LoS so short, artillery and mortar fire was difficult. My PRTP came in very handy, throwing harassing fire down onto the German lines and causing random pinning, that slowed the German attack down and broke it up, they could not bring large numbers to bear, good job, because my troops were taking their sweet time turning up and getting into position. I did get a squad and the Maxim MG into my fortified building, and they would hold out most of the game, even attacked by 2 Goliaths, which almost brought the building down.

The initial exchanges favoured the Russians, the PO-2 swooped in, engines-cut, to silently drop its 2 small bombs (no effect!), but it was a counter for under air attack. After 6 turns I had taken 1 counter the Germans 7. It didn’t get much better for the Germans, as more Russian reinforcements arrived to thicken the line and I built-up the forces on my left for their spoiling counter-attack. The plan was to force the Germans to react, spend their orders fighting-off the Russians rather than keep advancing, but the slow rate of reinforcements arriving was delaying me… time to be patient and not attack too soon.

We had a brief break for lunch, the now traditional bacon butty and a cup of tea… time to reflect. It seemed bad for the Germans, their counter stack was at about 12, the Russian just 3, and the Russian’s armour had now arrived, I was warily keeping it back though, fearing all those Panzerfausts. The main German thrust through the buildings (the centre), had stalled and bogged down, to be abandoned until more troops could get forwards. Their Goliaths had finally gone off (3rd game lucky) but failed to bring down my fortified building. My mortar fire was a constant pain, with nothing coming back in return. (historically there was little German artillery fire, with most of it being on tow for the break out or already lost).

After lunch the Germans changed attack-plan, and decided to try and press directly up Holsteinner Damm, along the river bank, sending pioneers, the StuG and AA truck forwards. At 20” range all hell broke loose… the StuG was missed by multiple waiting AP shells (frustrating), and then its return fire hit and bounced off my guarding T34/85. Next turn its hit didn’t bounce and my tank was wrecked, lost that duel!. But the Zis3’s fire kept the Germans back, and narrowly missed the AA truck, which then scooted away. The pioneer squad, flamethrower-and-all, got pinned down in a building, and so couldn’t get forwards either. I made sure I kept it that way with infantry and sniper fire ever turn. That little crisis dealt with, my own counter-attack started, sending infantry to clear the first building, with tank and mortar fire to shoot them in. Raked by MG fire the infantry squads took heavy losses and fell back, leaving my two T34/85s to pound the buildings until their HE bins were empty, then turn to MGs. The building was under very heavy fire, and the Germans within (including the civilian staff) all pinned down. That prevented the second wave of Germans getting forwards and so I judged the counter-attack had done its job, even if it did cost be some BR counters (I could spare them).

The Germans weren’t making any progress now, along the front line the firefight continued, building to building, and the attrition was mostly still in the Russians favour. The loss of another squad saw the final BR counter draw break the German escape attempted. It had failed. Victory to the Reds, much needed in the terms of the campaign, but the score is now 8 to 4 campaign VPs to the Germans.

The final battle of the series now awaits, the last assault on the Konigsgarten and the HQ bunker in the city centre. I still need a big win in that one, but it can be done and I have my heavy weight forces to field for the first time, JS-IIs, flamethrower-wielding assault pioneers and some big guns for house demolition work. 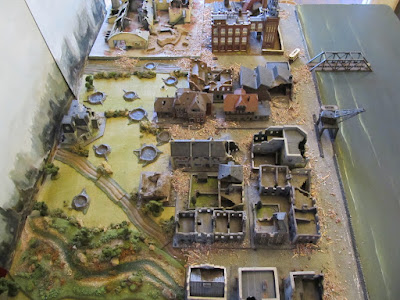 The tabletop, Germans at the top, Russians at the bottom, Pregel river on the right. 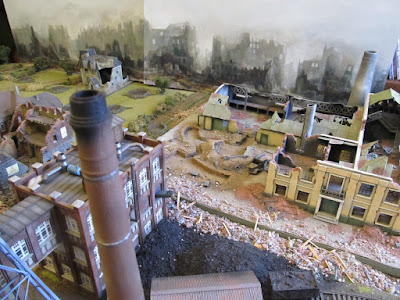 German end of the table, deployng into the factories 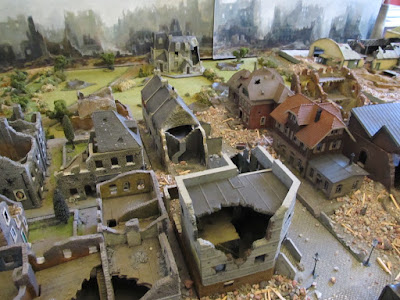 Russian end of the table. These houses would see the heaviest fighting of the breakout battle. 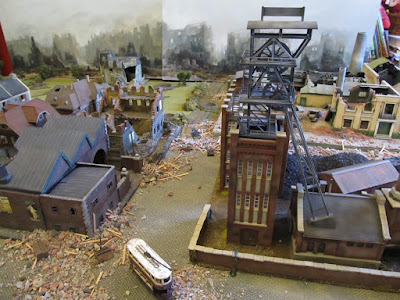 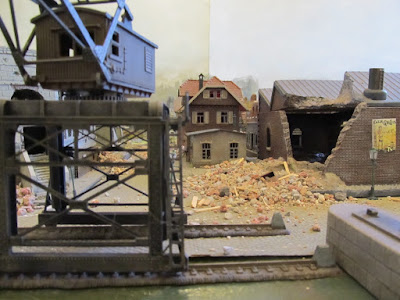 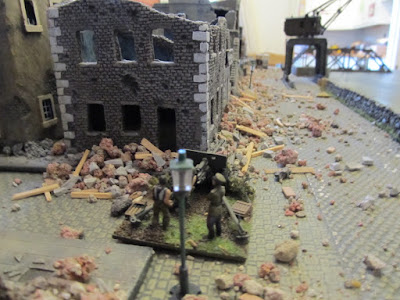 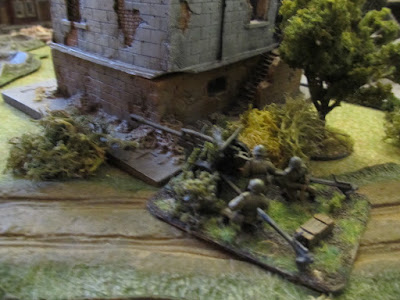 Second crash-boom watching the open ground on my left 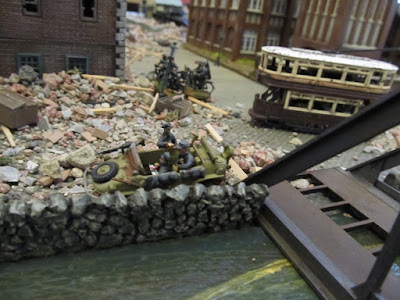 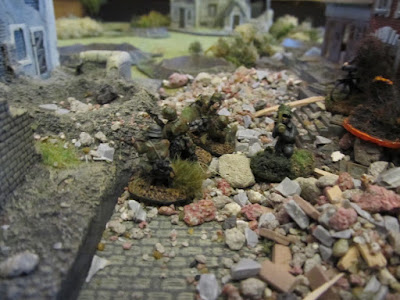 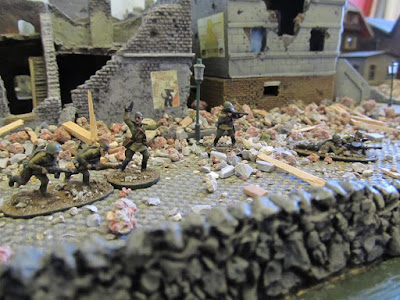 Russian infantry begin to arrive to block the German advance 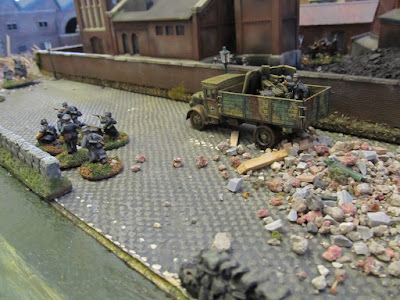 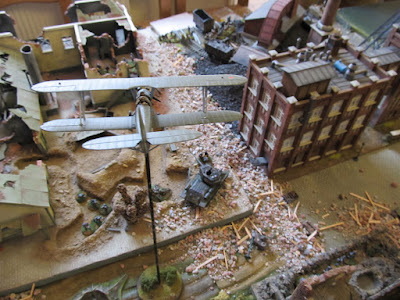 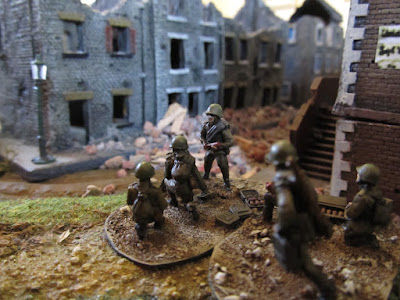 Russian mortars deploy, new AB miniatures, painted for this battle, and they all survived. 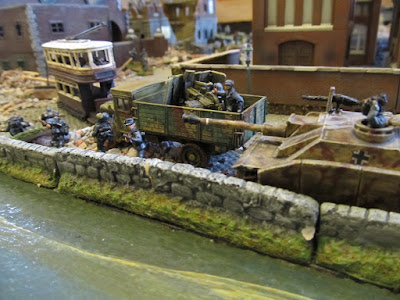 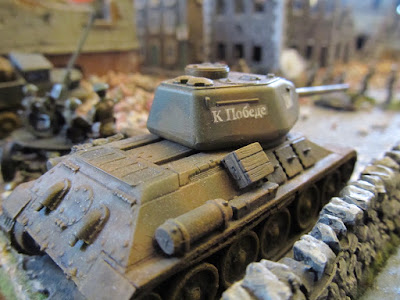 Here is what is waiting for them. 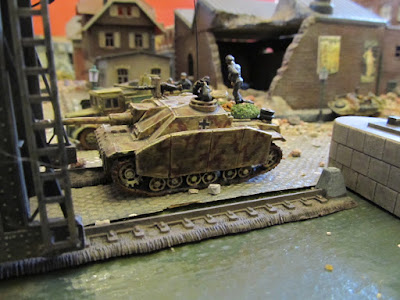 StuG gets into range (20" in the darkness) 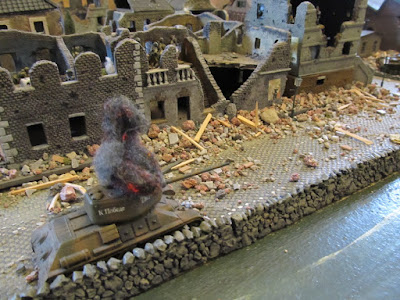 Ahh.. well that could have gone better! 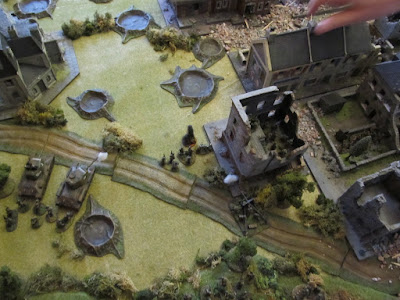 My little counter-attack building up, tanks now in place for fire support 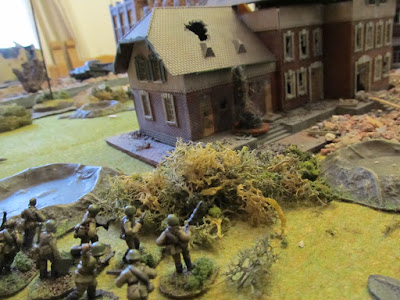 Ura! Bold infantry dash, MGs within soon put an end to that though. So much for the support fire!