Following last time’s German victory, this game would be another of 5th Panzer Division’s afternoon counter-attacks to hold the Pillau corridor along the Pregel river (just south off the map) open against the Russian advance west of the city. This time the scenario would be a meeting engagement, Recce Screen, with 5th Panzer moving east to block the Russian vanguard as they move south to the river. The two forces would clash close to a small hamlet and inn/tavern called the Spittlekrug. 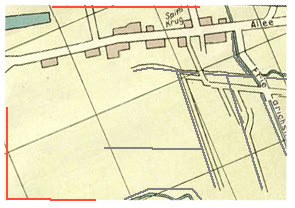 Map of the battlefield and entry points, Germans in the south-west corner, Russians to the north.

With the map and scenario in hand we both picked our forces. Russians were chosen as 700 points from the FotR lists. Germans 750 points (bonus 50 pts as they won last time) from the 1944 Panzer lists. We made a few alts, to better represent the perilous state of the German armour, allowing them to form an ersatz armour platoon from a Pz IV, StuG and Jagdpanzer IV (L70), with the tank as the officer. They also had a 251/22 in support, not available in ’44 list, but fine for this late in the war.

My forces were as follows:

The game got underway with the maximum 6 turns for the recce phase, which didn’t go well for me. I lost one of my Razvedka teams to MG fire and both my snipers got pinned down and unable to return fire. My ace-card (the T-70, not often you can say that), came forward confident of taking on his light armoured car, only for a heroic action and a Panzerfaust hit from his Fusilier patrol (men on bicycles again!) to interrupt. The T-70 went up in smoke… drat. To make matters worst his recce commander was an arty spotter and he had 2 off-table Wespes to fire their 105mm guns from turn 1… my poor recce couldn’t live with that firepower and by turn 6 there wasn’t much left, just a hiding Razvedka team in the hamlet, pinned, but still in place to call in some artillery fire when we got the reserves and targets showed.

And so, having won the recce phase the German’s reserves began to arrive, at speed, the armour moving across the pastures, right to left to my front. Not to be out-done, the Russian also arrived in numbers and got the SU-85s into firing positions and on ambush fire, awaiting that armour. My infantry arrived in trucks and began to de-buss, only to find themselves directly under a German PRTP… ouch, the 105mm shells rained in and I lost a truck and most of the infantry was immediately pinned, that artillery was already causing me a big problem, oh for a counter battery fire mission or two!

My bad start continued, the fusiliers sneaking up the hedgerows continued to be a pain in the backside, I failed to spot them and HE failed to pin them, and they got to 10” away from my leading SU-85, to unleash their second Panzerfaust… another hit, another kill… Lord! Who were these men? Some hardened veterans of the eastern front, they had 2 tanks killed already. The SU-85s really missed their machine guns, was I supposed to fire AP at them? Because its all the ammo they had left!

The Germans advance continued, grabbing an objective (another counter, my stack building way too fast!), and their FHQ arrived to add more 80mm mortar fire to my woes. My force was almost fully pinned down. I did get a break when 6 more reserve units arrived, and on came the last of my infantry and the SU-76 battery, heading to my right, to where the open ground offered good fields of fire at soft German targets (his distant mortar team, SdKfz 251/22, supply truck, etc). First, the ‘bitches’ had to get to the wood-line, which would take a turn or two. So far the misery and punishment had been all mine… that was about to change.

My FHQ was in place and called down a 1st priority request, sending his dispatch rider off to army-level support. In came 4 x 203mm guns, a huge barrage. And it was also accurate, smack on his objective. The shattering impacts left his recce commander’s armoured car wrecked and his Pz IV officer KO’d as well. 5 more pinned units could be added to the tally… woo-hoo, big artillery smack on target, eat that! … the Germans knew they were in a fight now. To add to that, my counter draw to unpinned was an aircraft. An IL-2 with rockets was incoming, and thanks to the Razvedka team, it would arrive next turn. I was back in the game.

The Germans long drive across the fields from left the right continued, grenadiers on the backs of the StuG and Jagdpanzer, and a pioneer squad in 251 just behind them. My last SU-85 got a bead on the Jagpanzer but missed, the duel between assault guns was on. In an exchange of shells, both scored hits and failed to penetrate, my SU-85 then withdrew and re-armed, came back, scored 2 hits, both of which bounced off and then took a return hit from that monstrous gun that ended its battle - good fight though. By now my armour, a lend-lease ‘Emcha’ platoon had rolled on, and my own on-table mortars had deployed. The Rifle platoon HQ was now calling in their harassing fire and laying down more pinning. The German counter stack had risen suddenly. My IL-2 dived in, missed with all its rockets, despite taking damage from 20mm cannon fire whilst inbound (obviously the pilot was put off by the big holes in his wings), but he’d be back to strafe with MGs next turn.

The German armoured attack kept coming on my left, up the lane to the river, but another lucky counter for me saw his StuG breakdown and become immobilised. Only his Jagdpanzer IV was still in action, and it must be low on ammo. Another artillery request from me saw Front command provide a battery 4 x 152mm guns this time, and this landed smack-on again. His Flakpanzer 38(t) (busy on ambush fire at the IL-2) was flipped sky high and his FHQ pinned and lucky not to be killed too.  Those extra chits made it close again… and as I unpinned I drew another aircraft and a second IL-2 arrived to bomb the Germans behind their hedges. Go the VVS… the German commander was worried now, his good start was long forgotten.

So to the denouement of the game. My aircraft were circling and strafing (a third then arrived as well, my God, unheard of for me), my SU-76s where in place and firing HE into his mortar team and at his supply truck, which had to run off to avoid being blown up. One SU-76 was destroyed by very long range return fire from the 251/22 though with a lucky hit. I was just 6 points from breaking now, but he was close too. For the Germans, knowing that the 3 Strumoviks would break him soon, desperate times times called for desperate measures, he had 2 objectives (on his side and in the centre, where a lone MG team were hiding and not firing for fear of being strafed to death), and his attack up the lane was close to the third (and last) objective. It had been held by my Rifle Platoon HQ, but they had been wiped out by MG fire, leaving only a supply ruck and a jeep holding it. So, do or die, the German pioneers attacked, 251 racing up the lane they de-bussed, fired a Panzerfaust into the supply truck and blew it sky high (very high), and their MG team riddled the Gaz jeep full of holes too. He was also on the objective and claimed it… 3 BR counters for me, and he had all three. And with that I was done, the counters broke me before the all objectives secured victory mattered. Beaten again. But it was close… the Germans were only 5 from their breakpoint, so 2 counters most likely would have done for them, and my aircraft would have strafed me up those next turn, I’m sure. Soft-skinned vehicles make easy targets, and mine had cost me the game, should have withdrawn them, but i had nothing to hold the objective then. So, it turns out, you can’t hold an objective for long with a supply truck and an unarmed jeep!

The German pioneers had moved from the far table corner the long way round to my table corner and lost not a man, such it is to be mobile, armoured infantry, and they had risked all to win it, because my tanks would have responded next turn with everything they had. Fortune favoured the bold - as it should.

Another great game. Another German win though (if narrow), the campaign VP score now stands at 5-3 to the Germans. Need a win next time, game 5, when its into the suburbs of the Konigsberg for some house-to-house fighting.

Only a few quick snaps this time… the game was too absorbing. 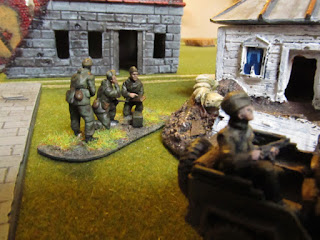 First game out for the Zvezda Razvedka teams. Deploying into the hamlet. 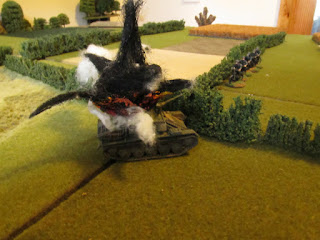 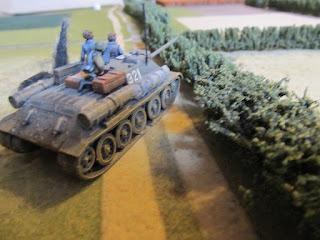 My lead SU-85 gets into firing position early, on the lane down to the river only
to become another Panzerfaust victim of the fusiliers. 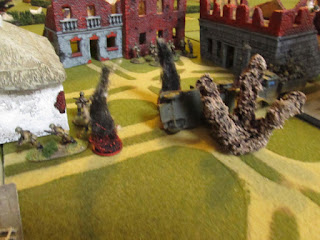 Motor Rifles deploy into the buildings, right under the PRTP, incoming 105mm shells cause havoc. 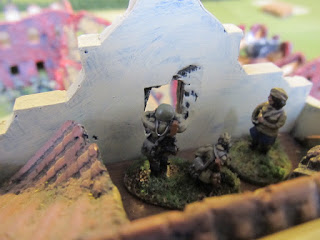 My senior officer in place to return the favour, only with more, far bigger guns. The 203mm stonk won't be forgotten by the Germans soon. 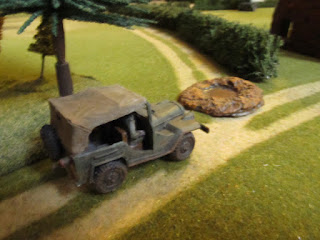 Razvedka's Gaz jeep left to hold an objective (the crater). Should have withdrawn off the table, but it'll be safe behind the woods! Err, no... 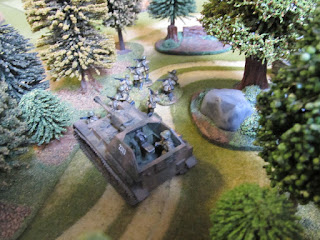 SU-76 and supporting rifle squad make their way into firing position at the edge
of the woods on my right (around the lake). 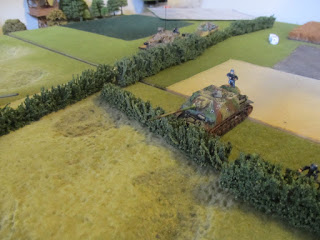 Jagdpanzer IV (late war ersatz one), StuG and pioneers conduct the attack up the lane.
Here, The jagdpanzer is exchanging fire with my last SU-85, a duel it won. 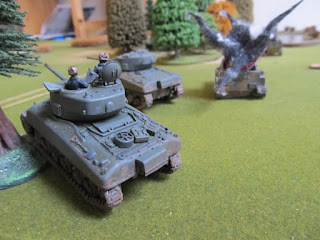 'Emcha' roll on, passing the SU-76 that got hit at very long range.
There return fire failed to find targets. 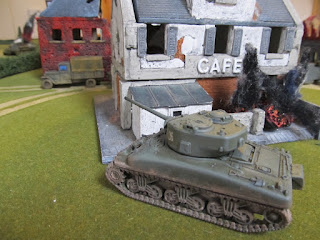 Last 'Emcha' arrives, to cover the objective on my left, but no time to get on ambush fire before the Germans arrived. Behind is the supply truck (soon to be another Panzerfaust victim), and beyond, the burning SU-85. 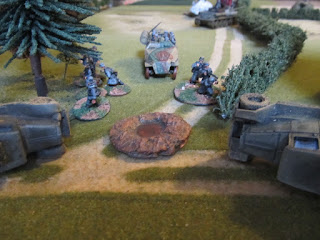 Pioneers rush in and take the last objective in blaze of fire.