So, next year, Battlegroup will be running a couple of events at Battlefield Hobbies, which is a very cool shop and gaming centre in Daventry. The first event will be a campaign weekend, along the lines of the previous weekends, but with a few changes. This time it will use the FotR campaign book and it will be set in March 1945 around the (fictional) town of Mundenberg, where a last tough pocket of resistance is holding out and the British are leading an attack (with US aid) to clear it out.

There will be 15 tickets aside (Allies, Brits or US, or German), and each player will play 2 games on Saturday and 2 games on Sunday. The Germans will try to hold the town and then put in a local counter-attack on Sunday. Players each play as part of a larger team, earning VPs for their side to determine the overall winners. It isn't a competitive tournament, and the historical theme is kept throughout. Some locations around the town will be key objectives and no doubt see the hardest fighting for bonus VPs. All the games will be with forces chosen from FotR, so it will feel right. There are no individual winners, this is a team game.

It's all happening on the weekend of January 28th-29th. All forces involved must be 20mm in scale and 500 points (you bring your own models but the terrain is provided). There is a briefing pack available too, that set the scenarios and some extra restrictions and aid to keep the campaign feeling historically right.

I shall be umpiring, keeping track of scores and doing the admin bit, whilst everybody else gets on with their gaming fun and winning in their sector of the front.

Each time we have done this before its been a cracking weekend of really good battles, played in a great spirit. It will be again, and the venue is top notch, I don't think there is better one in the country atm.

Tickets and briefings are available from Battlefield Hobbies events pages. It's well worth it if your a BG fan, and you meet lots of other players as well.

There will be another event later in year, as yet to be decided. 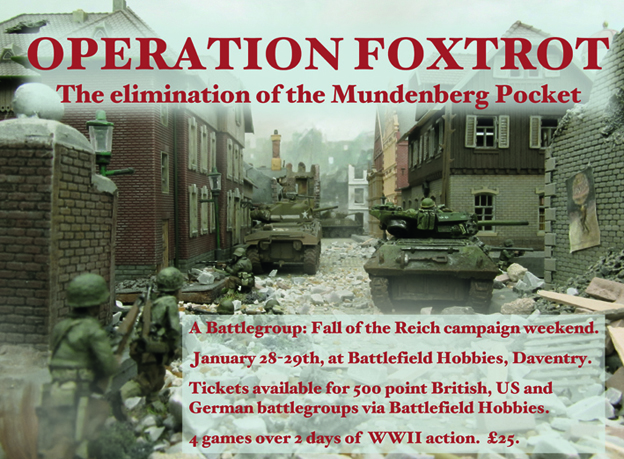 With a weekend at home and not too much on, a rarity it seems these days, I decided to give myself a modelling project, something to get done in just a couple of days. For a long time I have neglected my terrain collection. I have a lot, and it sits in various boxes, but its becoming a bit worn-looking, too many chips, breakages, etc. I think it needs a make-over, so I went in search of some buildings I could give a tart-up. Rooting through boxes I found some buildings I had forgotten about. Two years ago they were gifted to me, by a friend, who had a friend of friend that had dismantled his model railway set and was giving away the buildings. To cut a long story short, I was offered them and, as they are HO scale, which is roughly 1/76th, and really nicely painted I couldn’t say no, they are superb! They are all parts of a mine head, and so I made plans to create my own wargaming minehead terrain piece. I never got beyond the planning stage, and the buildings were consigned to a box, collecting dust. Until now...

On my weekend foray I re-found them and decided they had now languished too long. It was time to put the plan into action, two years was a waste for such good stuff. It was a bold plan, with lots to do, but to save time I decided that I’d only use modelling material, paints, etc I already had, no shopping required and I could then crack straight on. Searching through the detritus of model-making stuff in my shed I found a piece of thin plywood to be the base, once jigsawed to size, and lots of other stuff, like various bags of grit/sand, etc and my big bucket of strong PVA glue. I also turned-out some old bits of railway track I kept in a bag and searched for any other ‘useful’ bits.

Commandeering the dining room table (well half of it) for two days, I set-to with the plan to get the piece finished in one weekend. The buildings were complete, they just needed sticking down, which was the really time-consuming bit done. I just had the ground-work to do and lots of that was going to be piles of coal (very easy to paint with a black spray can).

In the end it couldn’t quite be done. Life gets in the way and Saturday had been a late start after the search for all the bits. Drying time for all the PVA used was also longer than I thought, even with the model in the airing cupboard over night. Still, a few extra hours of detail work was all it was missing by Sunday evening, and that’s the stage I got it too before pausing  to take some photos (below).  I thought about battle damage, but couldn’t bring myself to trash the lovely buildings, so they remained intact (also far faster).

Terrain building, much under-rated by wargamers, is a pleasure. Messy, with glue, spray cans, paints, grit and sand everywhere, the hours just fly by.

In the end, I have a single 24” x 16” board for my mine head, with 4 buildings, including the winding tower and a tall chimney, several heaps of coal and a small marshaling yard area at the back (so leading off the table). I wanted to keep it tight, as a place for infantry to lurk and fight over rather than the tanks (they have the rest of the table), you could maybe squeeze a tank between one of the buildings, but it wouldn’t be advisable with enemy infantry stalking the buildings.

Once its on the table, with a few other factory/industrial buildings next to it, it should really look the part, and I kept it generic, so I can use it in Germany in 1945 or in Russia (early war). I’ll try and squeeze it onto a game sometime soon, I can see my Volkssturm platoon defending it against the advancing Russians. It will definately see some action at next January's BG campaign weekend as a vital part of the German defensive pocket. Better get those finishing touches sorted, final drybrush highlights and pin washes, a couple of abandoned railway wagons glued on the tracks and it’ll be completely done. It could also double as a set for Peaky Blinders! 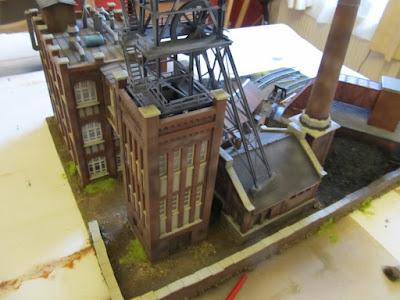 The pit head, almost complete. First grass scatter just chucked on, way too bright but it'll be dulled down with black washed. Lots of black washes on this. 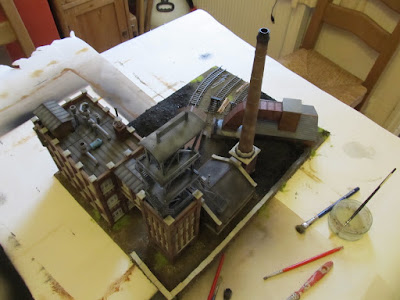 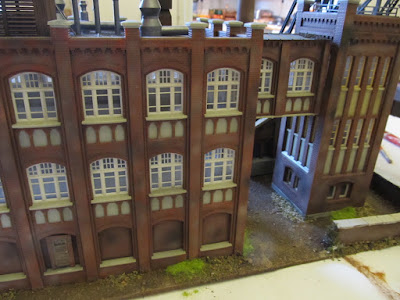 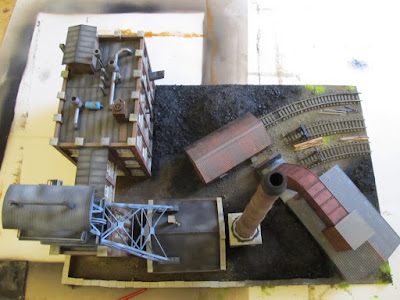 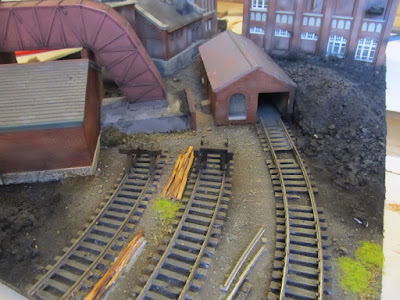 The marshaling yard at the back, missing two dirty old coal trucks as extra cover. 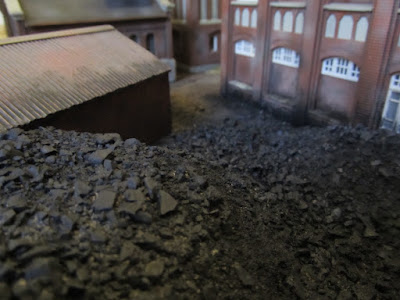