The game we played was a small action by British forces advancing and clearing the Liri Valley, after the breakthrough at Monti Cassino (yep, Italy for a change). The write-up below is for a more historical scenario based on the actual forces, but in our game we just used the right terrain and selected our own forces, using the Overlord book (with a few small alterations). This was mainly so we could us the miniatures we wanted to (or have just painted) in a pick-up game on a Sunday afternoon.

The British force consist of 2 infantry platoons (on foot) supported by a squadron of Churchills, with off-table mortars and timed 5.5” and 25 pdr strikes to hit the village early. The Germans were veterans from 1st Fallschirmjäger, supported by a StuG and a Ferdinand (never used one before, so this was very cool).

Below are a few photos of the game. It didn’t start well for the Brits, as their leading Daimler armoured car was toasted by a Panzerfaust trying to sneak an early objective and their opening artillery did very little (most of the FJ were still in reserve or not in the village, instead pushing forwards in the hedges and vineyards to wait on ambush fire). The British advance was dogged by poor reinforcements rolls, so was very piecemeal and the veterans FJ were fighting hard, causing a lot of pinning with their MGs and then with an accurate Nebelwerfer strike.

As the Churchills hooked right (my left) they crossed the sights of the waiting Ferdinand and in a display of awesome firepower it wrecked two in short order, at very long range – nice!

But the relentless British mortars had found their range. As the FJ arrived to occupy the buildings they came under sustained mortar fire which got their heads down, and pinned the German 120mm mortar team.

The first bold Brits reached the edge of town, but having dashed across open ground into MG fire, there were many left to press the assault further, and they were gradually whittled away to nothing. The last Churchill traded shots at maximum range with a StuG on the overlooking hill, and survived repeat hits, but then... we ran out time! Drat!

Despite the situation on the ground the BR reckoning was close, the Brits were still 10 from breaking, and after a series of terrible chit draws, (4, 5, 4, 5) the veteran FJ were actually only 11 from breaking too. Still, with the Ferdinand re-armed and now hunting the last Churchill, I don’t think the Brits could have taken the village today.

Here are some snaps from the game. A nice change from our norm. Italy has prospects for a good BG book, one day! 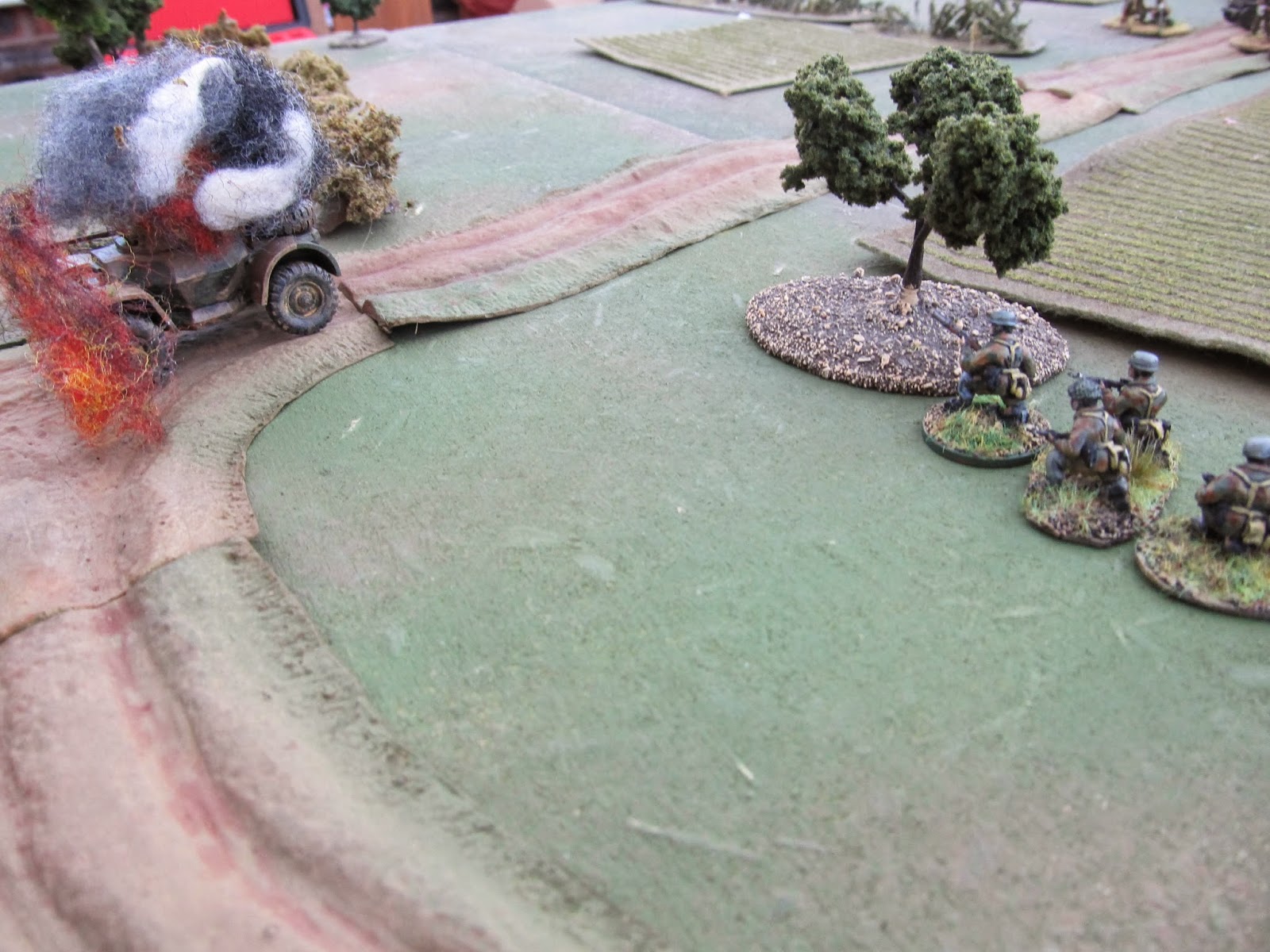 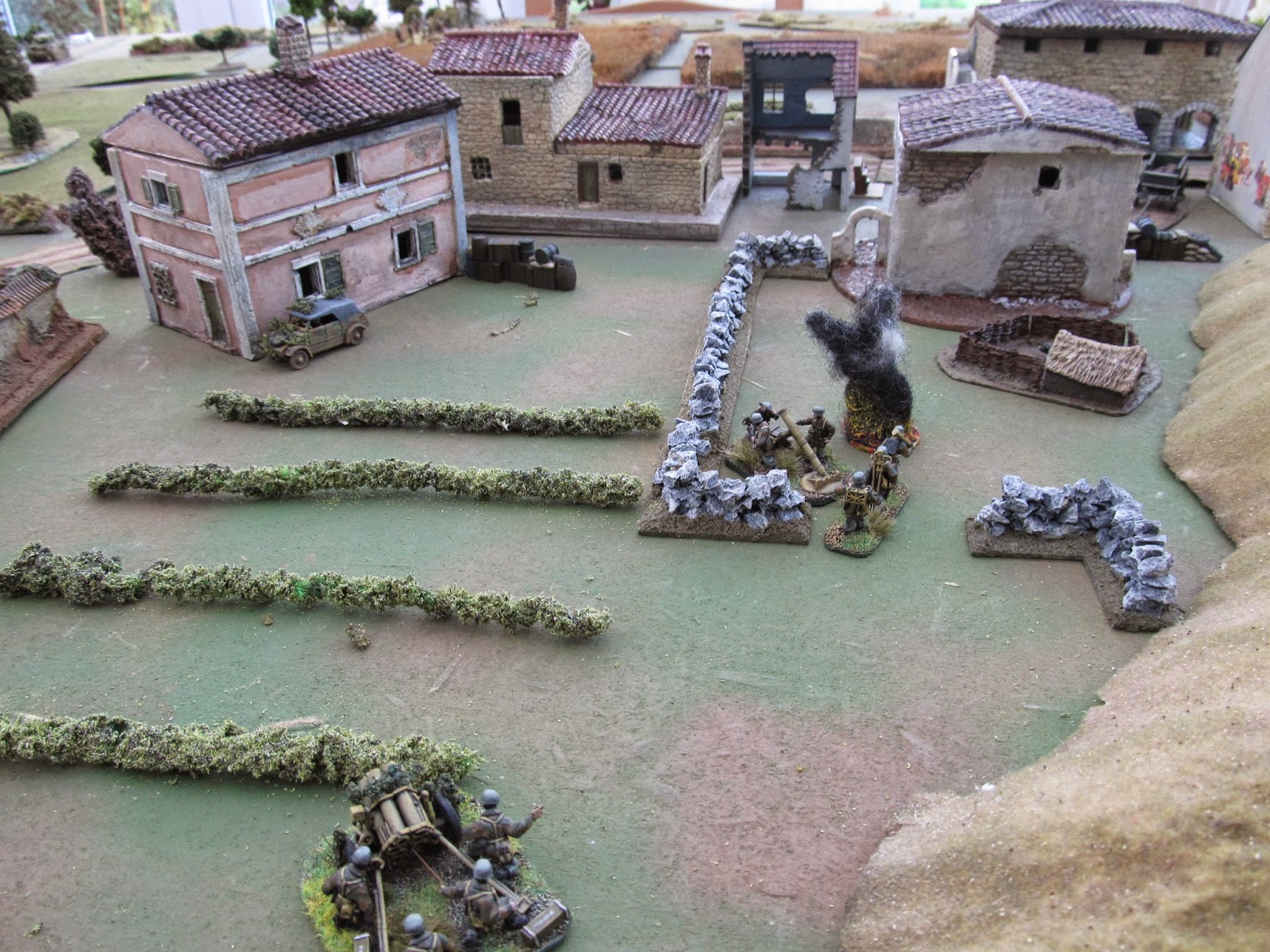 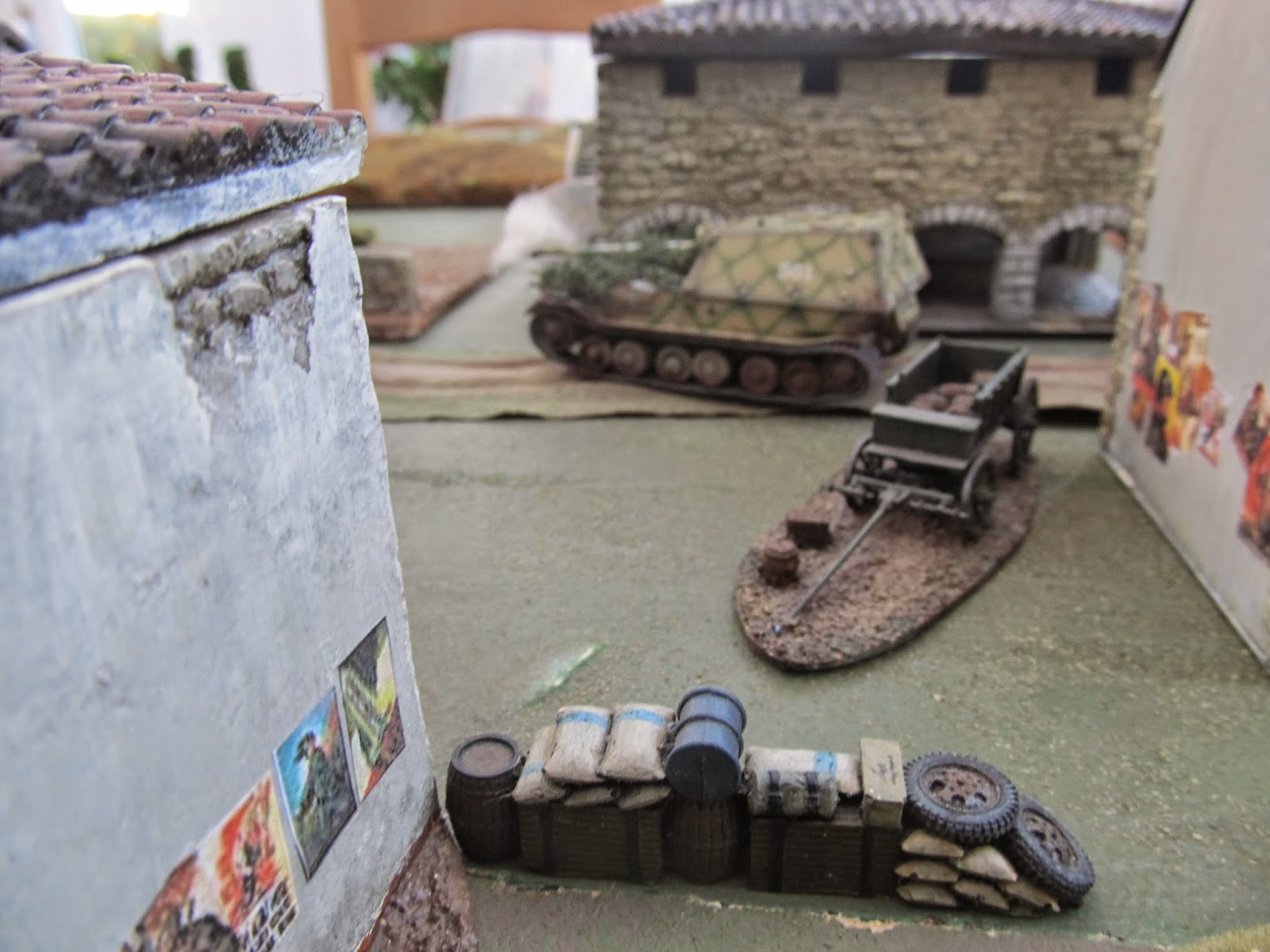 The lurking beast, on ambush fire. 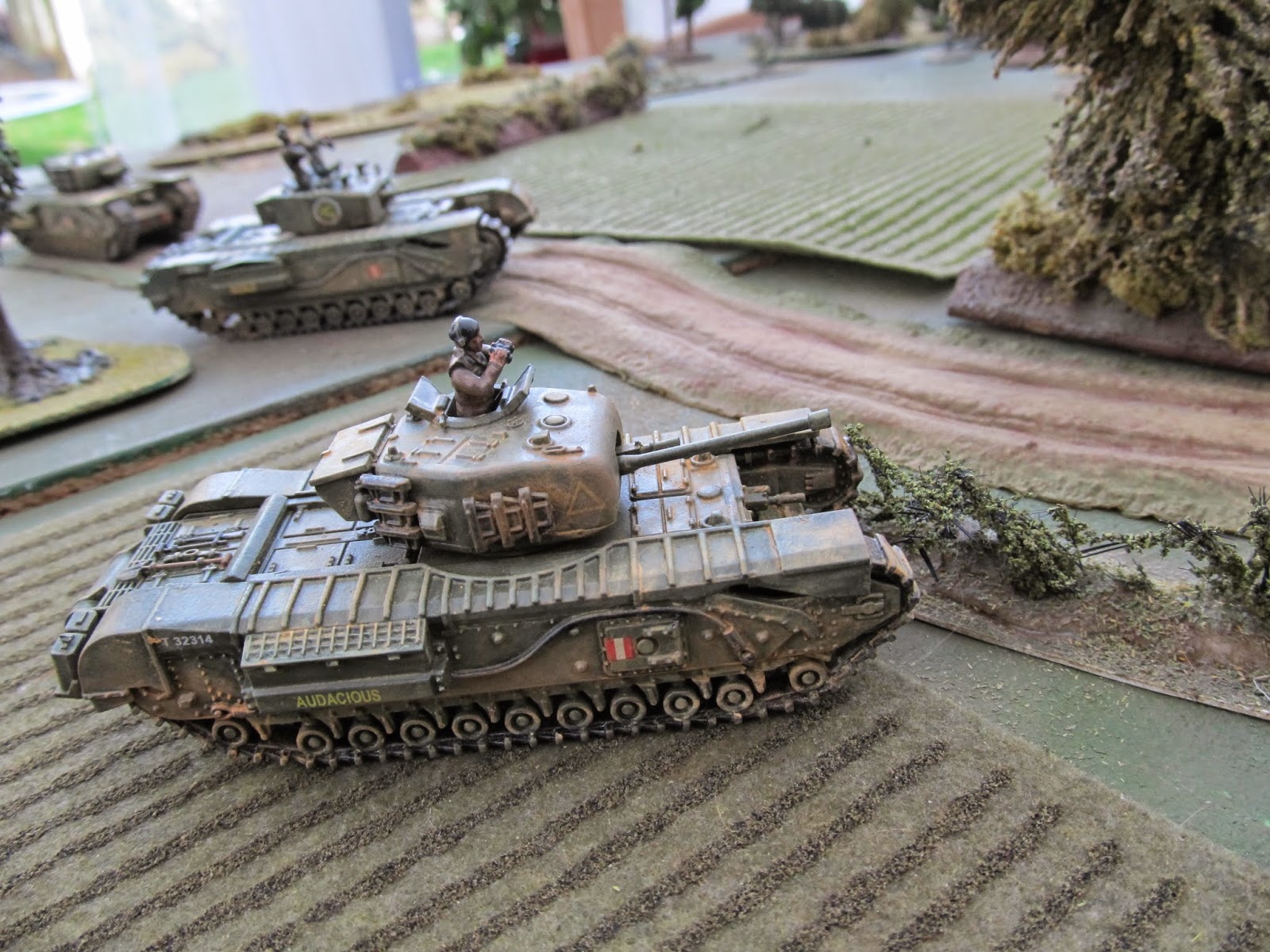 British armoured support moves up the road to take their chances against the very big gun waiting for them. 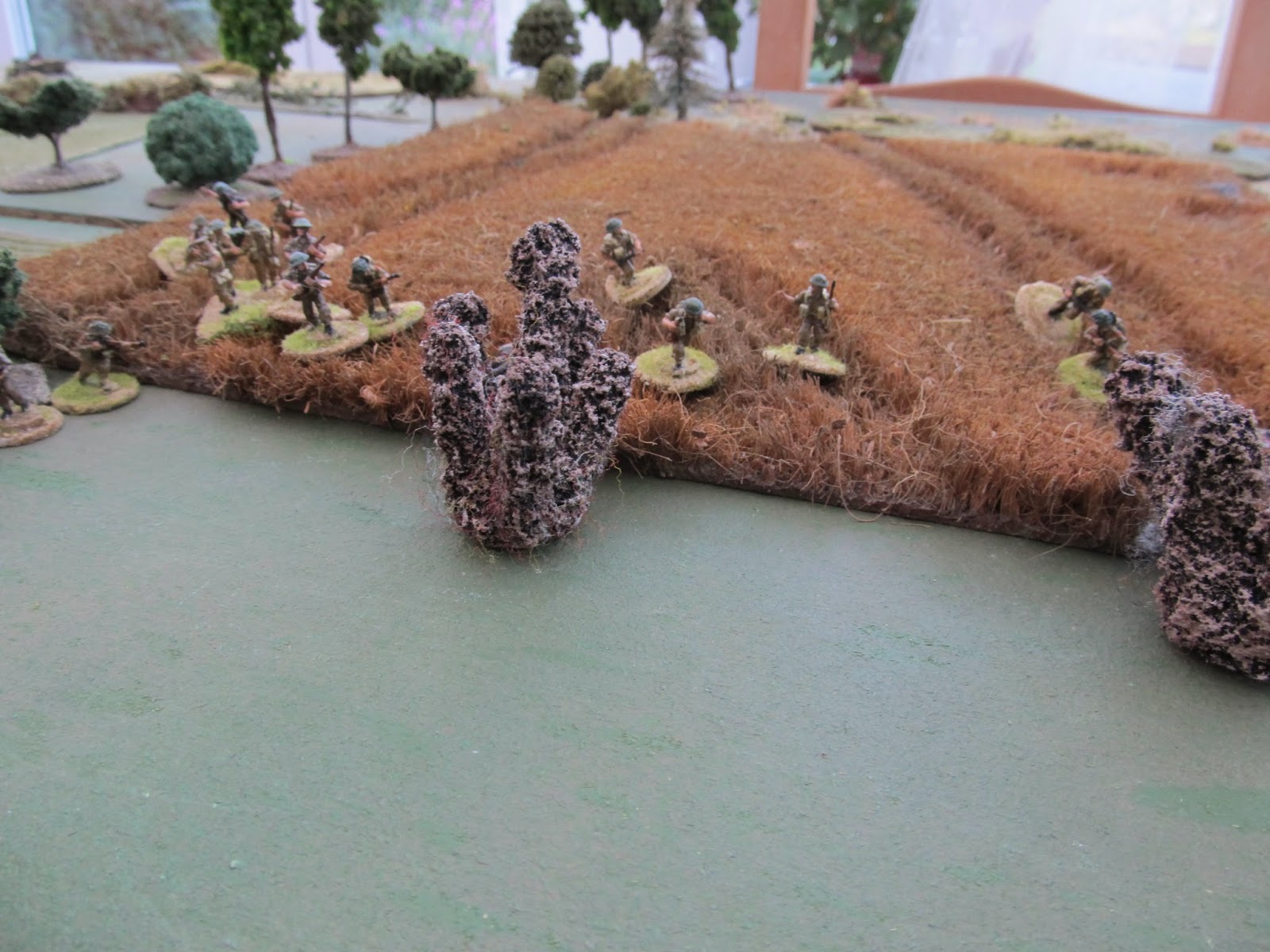 Infantry under 'werfer fire and pinned down in the village's surrounding cornfields. (Historically very accurate!) 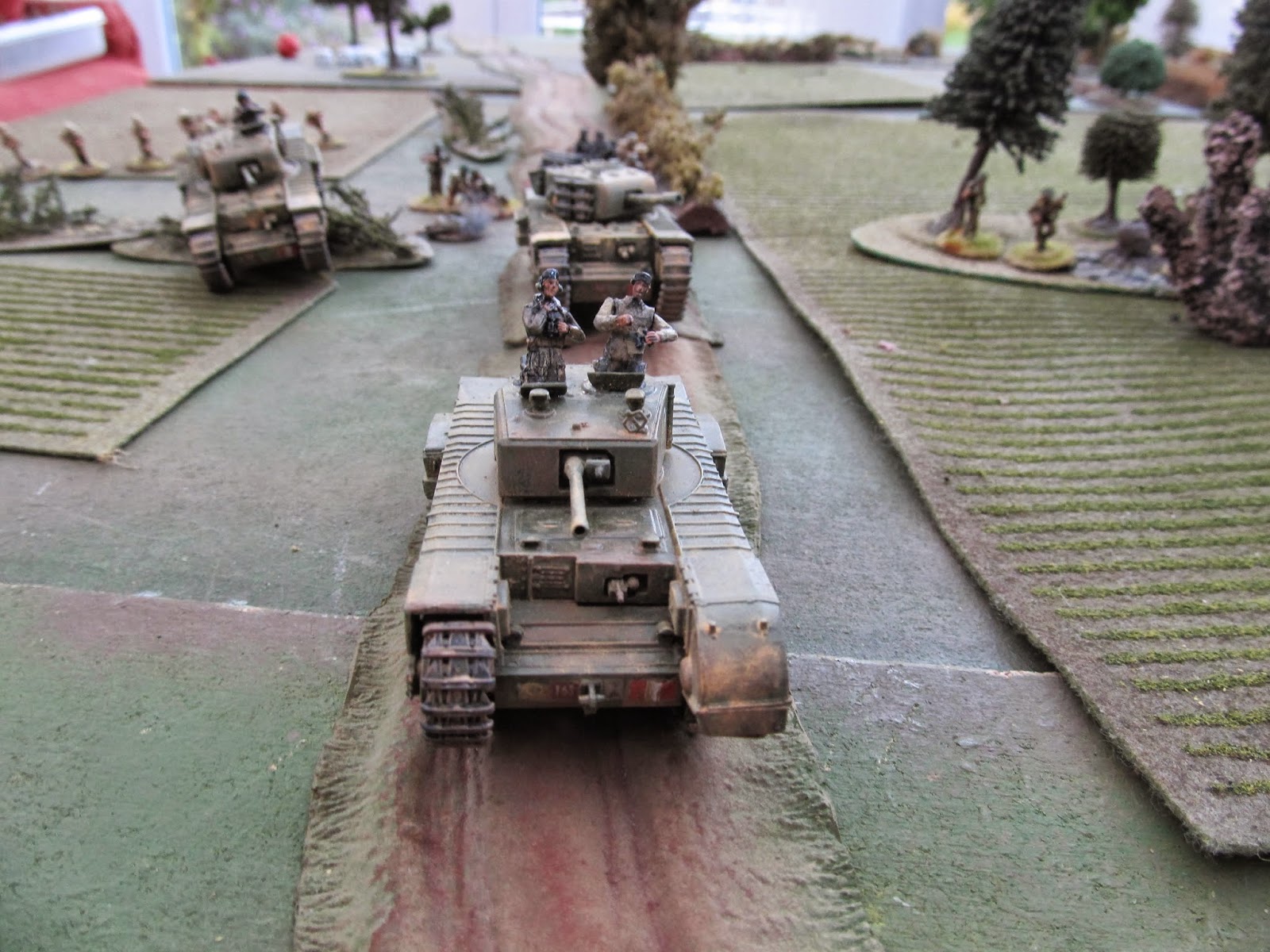 The Church's trundle up through incoming mortar fire. Slow and steady. 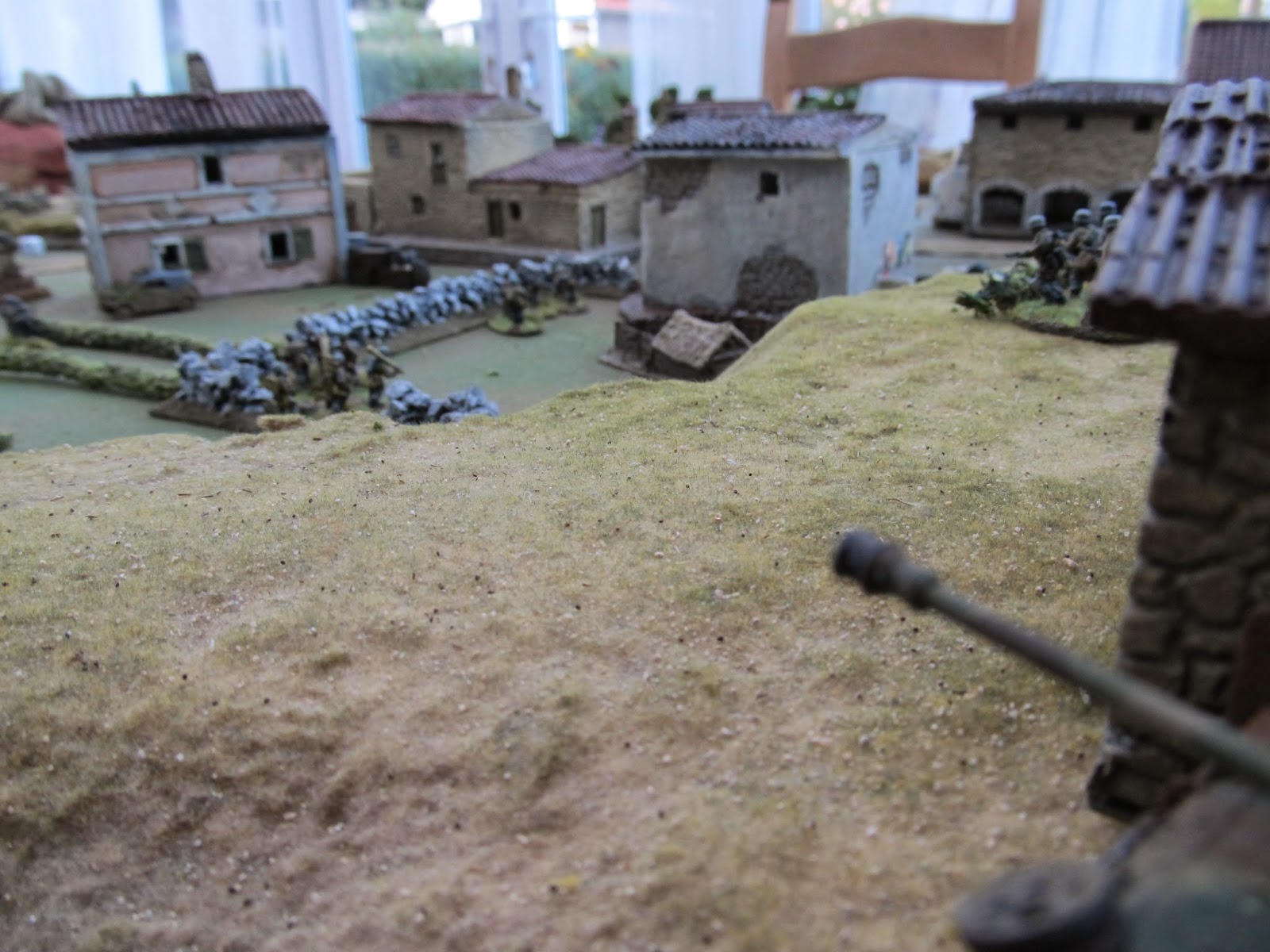 A StuG peaks its gun out from cover on the hill behind the village. Targets approaching. 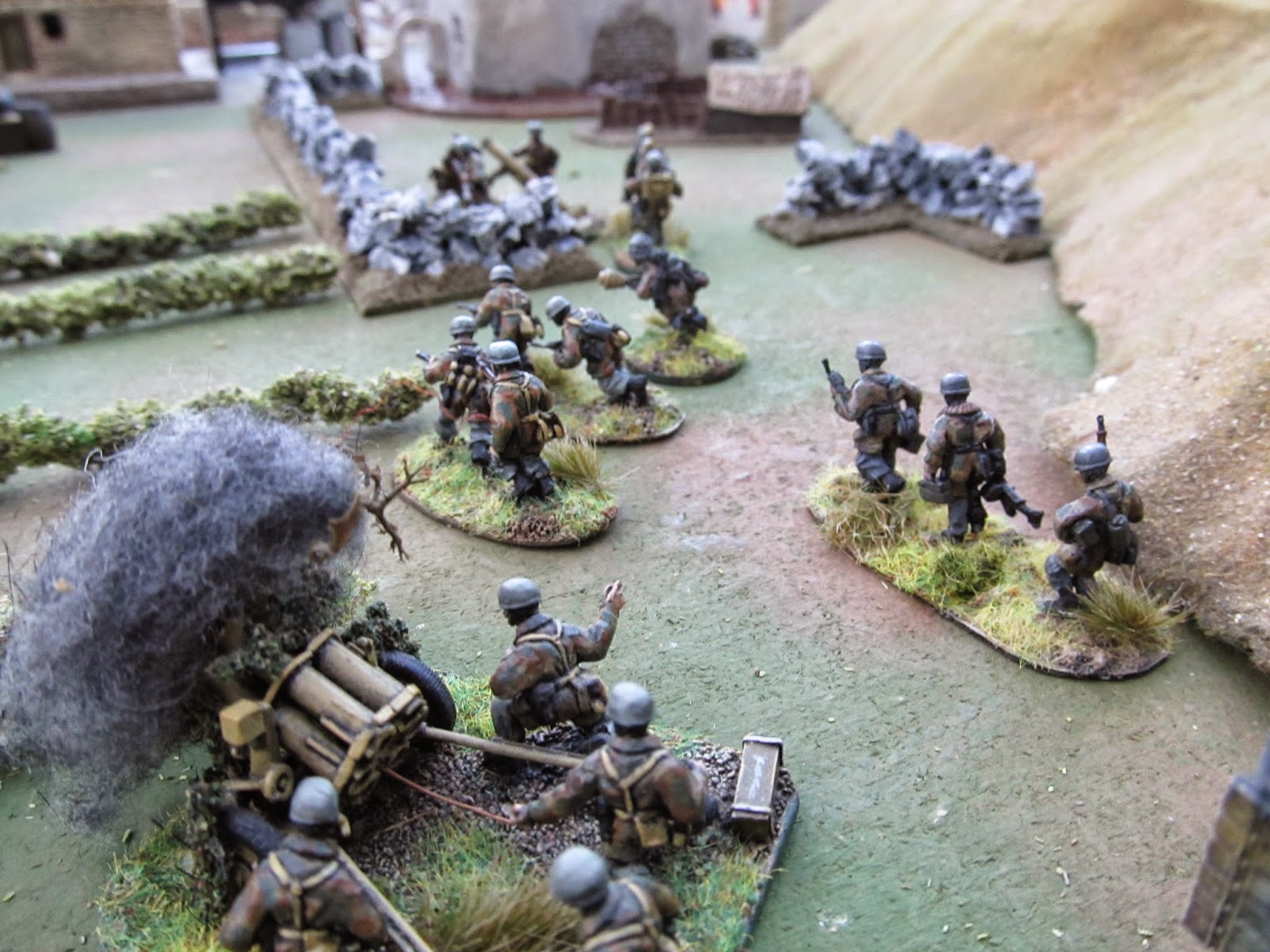 Meanwhile, reinforcments rush towards the cover of the buildings (Nebelwerfer marked as reloading) 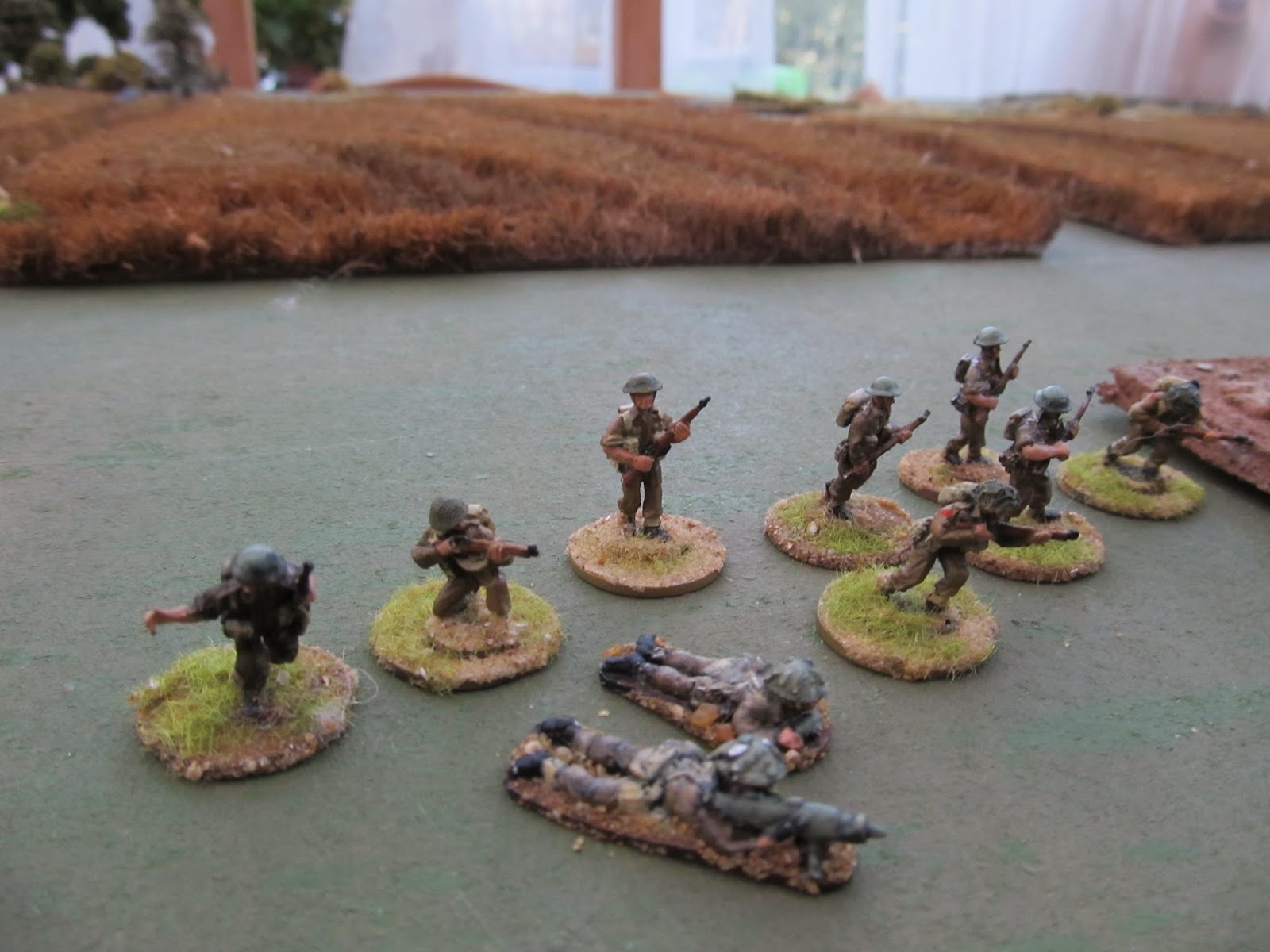 The last of the first British infantry platoon dash over the open ground from the fields to the buildings, swept by 3 MG42s. Ouch! The PIAT won't really help much. 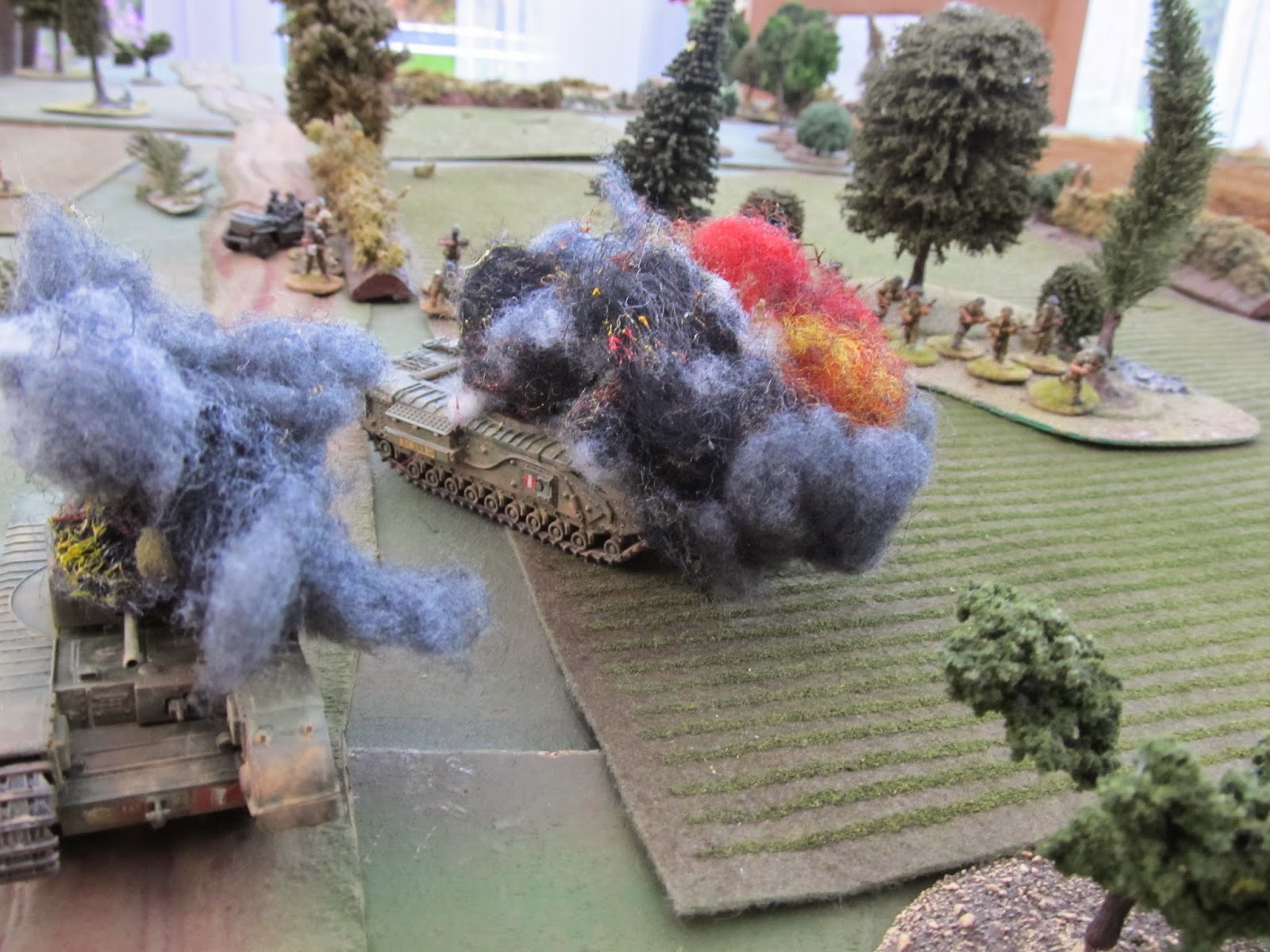 And this is the historical forces for the scenario.

Casa Sinagoga, Liri Valley, 16 May 1944
After the fall of Monti Cassino, the 78th (Battleaxe) Division is advancing into the Liri Valley to secure Route 6, the major road which leads through the valley toward the Hitler Line - the German‘s last prepared defensive position before Rome.

The 2nd Battalion, London Irish Rifles, began their attack on the heavily defended buildings near Casa Sinagoga just south of Route 6 at 0900 on 16th May, supported by Sherman tanks of the 16th/5th Queens Royal Lancers. Having cleared the building they reached the Colle Monache (report line Pytchley) just after midday. They spent the rest of the day staving off small attacks from the Piopetto river on their left flank, before the Sherman tank’s and well directed artillery was able to stop the counter-attack, destroying 4 self-propelled guns (probable Nashorns) and 2 anti-tank guns firing across the river.

Our game was inspired by the events in the capture of Casa Sinagoga by H Company of the London Irish Rifles and their supporting tanks and the successful morning assault. It was played diagonally across a 6’ x6’ board.

Included here are the forces if you want to replay the events with more historical forces.