With the holiday season upon us, there has been time for another playtest for the forthcoming Barbarossa rules and lists, and a sunday afternoon visit to my friend Andy’s house. He’d picked 600 pts from the 1941 panzer division lists to face 600 from my 1941 mechanised corps. It would be a straight forward meeting engagement. 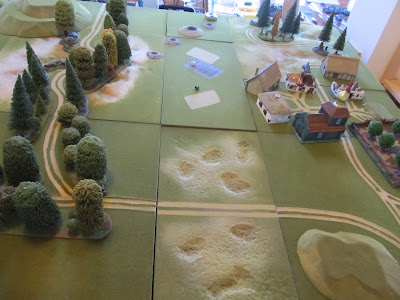 The German end of the table with the village and orchard, which would become very hotly contested. Germans arriving from top right corner. 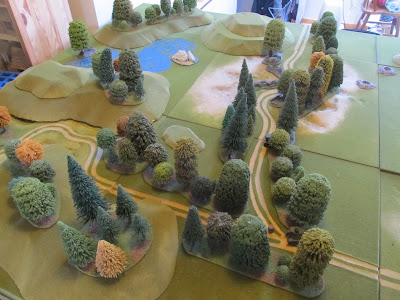 The Russian end of the table, all forest and a marsh.Russians arriving left to right (via the road) and then occupying the tree line.

My plan was to quickly get to the wood line and use it as the jump-off for a strong attack on the village from the left and right. On my right would be the BT-7s carry tank riding infantry. On the left, my 2 T-34s and truck-borne rifle platoon. Pressure from two sides simultaneously should keep the Germans well penned in. In support (off-table) I had a battery of 120mm mortars and a timed 122mm howitzer barrages.  That would hit the village on turn 6, time for the German invaders to get there in numbers and to get my attacking units on the table and up to the start line.

The game began badly, as German 105mm shells interdicted my route of advance (the road), destroying one of my armoured cars before it had done anything. The second armoured car made a daring (dumb) dash for the village, speeding out across the fields with only a 222 to take on. Or, so I thought, until a Panzerjager I appeared from the German table edge and destroyed it with a single lucky shot... both my recce units gone very early. 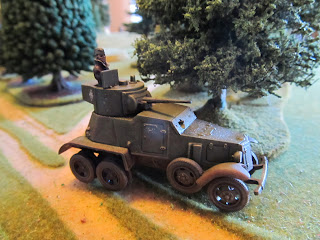 Deployed and awaiting (the road junction was an objective too). 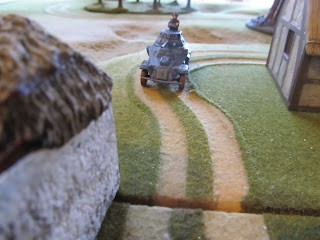 Solo 222 heads into the village, leading the German column. 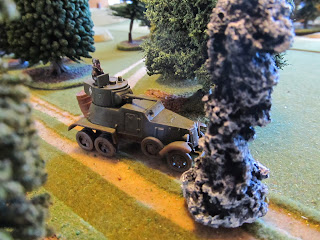 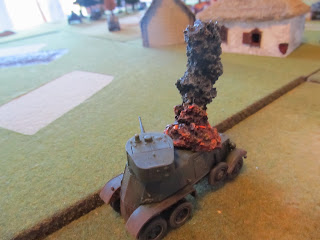 The Germans arrived slowly, a Kradschutzen squad racing for the village (good), with a Panzer III and the Panzerjager I. The escalation would continue as the Germans pushed along the road into the village (including their senior officer in his half track, confidently out front to lead the way). My motorised infantry sped along the road in trucks under intermitent 105mm and 80mm mortar fire, causing some pinning but no damage. My T-34s cut cross-country (they are very good at it), waded the marshes and reached the tree line, just in time for a direct hit from a 105mm shell to wreck one tank. My potent armoured strike force was halved in the strength. 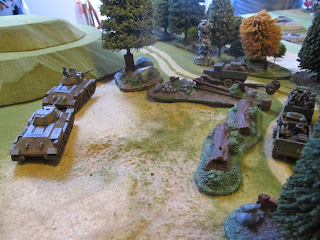 Truck-borne rifle troops and two T-34s making for the wood line
Meanwhile, the BT-7s and their tank riding platoon arrived and massed on my right, ready for the wreckless charge. Long range fire was exchanged and my 120mm mortars got going, only to find my observer was sitting on the target point of a timed 150mm barrage and a direct hit wiped him out messily. No more mortar fire support for this game then! 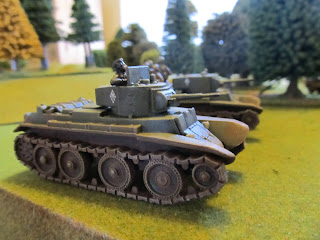 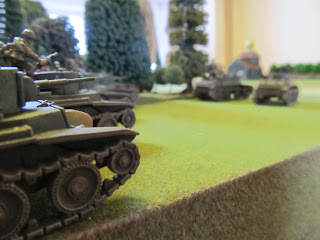 BT-7s amassing for the main charge towards the distant church. 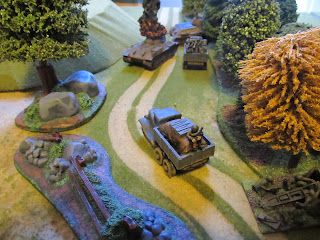 With all my troops on the table and deployed, the wood line was now packed with infantry (and an infantry gun), I realised there was not a hope of having enough orders to launched everybody into the attack at once. Even using the Stal! special rule my attack would not come as the almighty rush I had hoped for. The Germans were still slowly getting onto the table and setting up, the time to strike was now before they were ready and, it was now turn 6. My 122mm guns opened up on the village and suddenly there was a thunderous inferno. German infantry were dying and 6 units were pinned by the thunderous strike. Time to go, go, go! 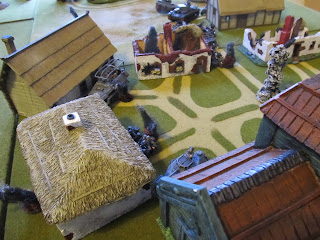 The village under a heavy barrage before the main attack 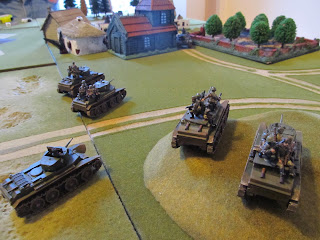 Stal! Stal! Stal! My BT-7s all went flat out over the open fields, infantry clinging onto each tank. A single Pz-III was in position to open fire, and missed twice, as 47mm HE shells added to the pinning in the village. It was very dramatic and the German commander looked worried, Mother Russia was striking back. Also, the village was the last objective I had’t claimed. If I could take it, then it was game over.

Of course, it's just not that simple. My infantry debussed from their mounts and charged on, rifles and DPs adding to the pinning. One squad seized the church, others were in the orchard. A 47mm shell ripped through the Pz III and it burst into flames. The village was in serious danger being overrun. 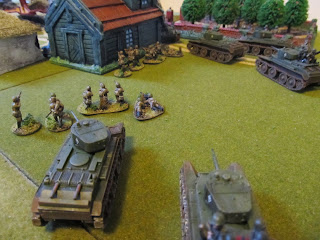 ... and smashing their way into the village

Except for the German's fast reinforcements it would have fallen right then. Kradschutzen troops used the road to speed forwards and debuss. Infantry packed every building and a big fire-fight developed as both sides hammered away with everything they had. German MGs (so many of them) raked the buildings and pretty soon all my rifle squads were pinned down. My BT-7s lent support, one hit the 222 and destroyed it, whilst the 251/6 and senior officer rapidly withdrew under fire from BTs, as the Major saved his own skin. 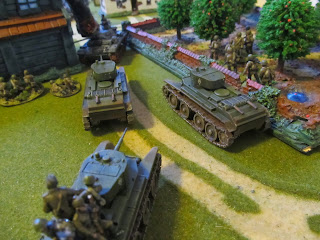 A towed Pak-36 deployed to engaged the BTs and immediately hit and destroyed one. Next turn, with the crew pushing it, they changed positons and hit and destroyed another BT. Never has a 37mm gun dealt such damage! 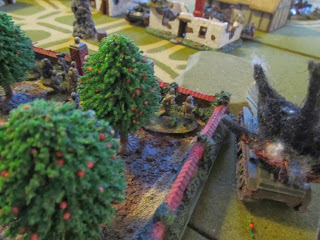 PaK-36 detonates a BT-7. The orchard was swept by MG fire from the Pz-III and buildings opposite.

With the intense fight around the village petering out with about 12 pinned units, my forces still in the tree line kept up some supporting fire with their rifles and DPs, with the infantry gun doing a fine job of keeping the Panzerjager I pinned with constant HE area fire. The T-34 emptied its HE ammo bins doing the same at a HMG-34 team set up and raking heavy fire along the treeline. The T-34 missed 5 times! It turned to AP shells and hit and glanced off the side of a Panzer III! Then, to compound the bad luck, trying to close the range and trusting its mighty frontal armour, it broke down with a grinding of gears and was immobilised. So much for the vaunted new tanks! Out of ammo, can't move.

Still, it didn’t affect the fight for the village. Unpinning as fast as we could (both sides were talking multiple counters for this), the firefight was resumed. A fresh Russian rifle squad assaulted a building and cleared it of an MG team, only for another Kradschutzen squad and MG to wipe them out. My own Maxim Mg was now in place in the church, but it drew a lot of rifle fire and was repeatedly pinned. In the orchard, swept by two MG-34s and tank fire, my two rifle squads and the platoon HQ couldn’t get over the end wall to assault. Only the lieutentent survived from his HQ squad, still shooting back with his pistol. I was suffering for BR. But, so were the Germans, as another MG team was cut apart by BT-7 mg fire and their artillery spotter's radio suddenly packed in, failing for 3 turns to get those 105s firing again, thank you god! No German signals vehicle either, so the game was mercifully free of German arty for several turns as the firefight raged. 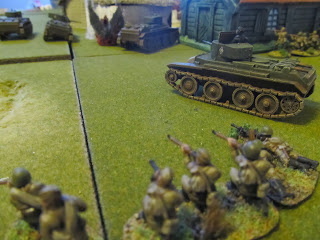 Circling the village, the infantry have just fallen back rather than be wiped out by MG fire.

My BTs, unable to get into the vaillge for burning wrecks, circled it and found another Panzer III waiting for them. It ambush fired and unluckily missed twice and a return shot luckily hit and destroyed it (on a 6). All Panzer IIIs were now burning. With no tanks left the Germans withdrew. His BR total of 41 had been reached with a final unlucky 5 counter. The Russians had reach 37 from 39, the narrowest of wins.

It was great game, a real nail-biter at the end as we both  could see the other must be close to breaking and fought tooth and nail for the village. I caught a ybreak at the end,  don't think I'd have lasted another turn, but thankfully this road east was now blocked.

Cheers to Andy for the game, a useful playtest too, although I'm happy with the rules at the monent. The Russian feel unwieldy and a bit chaotic, but their numbers and willingness to get stuck in won the game. The Germans were just all round good and anything but a 5 counter would have seen another German turn and almost certain Russian defeat.

Well, Merry Christmas to all, I hope Santa brings you what you requested. He better have brought my new 28mm ACW Union army on Christmas morning... but that's a biggy for 2014.

Just a quick post before the Xmas period kicks in and takes over completely.

Having finished my DAK, I went looking through the 'to-do' bins, to see if there was anything that grabbed my fancy. Found an old Matchbox kit I got from the Derby bring-and-buy for £2, with the thought it would come in handy for my late-war German kampfgruppe for Fall of the Reich. Can't let the £s go to waste!

The kit went together in about 15 minutes, and the rest of the evening was spent brushes in hand. I don't have an airbrush, so all those nice 262 faded camo-schemes seemed a bit beyond me, so I went for something a little bit more achievable with a dry-brush and a bit of light dabbing with a sponge.

One day it might actually show up on a tabletop. 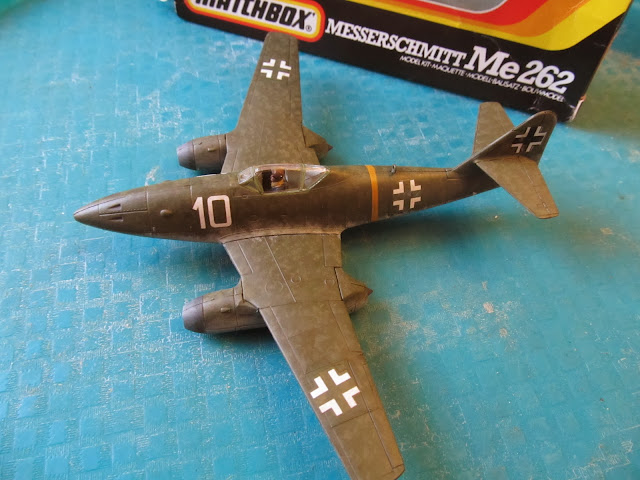 Got to say the 'to-do' bin is looking pretty empty... which is either a good thing, or bad thing. Only a Zvezda Russian 85mm AA gun and crew and a few Russian pioneers left. Plenty of space for next years big project.