Today was spend in running a couple of intro games of BG 'Fall of the Reich' at Derby Worlds. Great fun, with a few new converts amongst players and spectators. This was the morning probes on the southern edge of town by the Russian's in platoon strength... tomorrow will see the full assault strike in a 1,200 pt demo game.

Here are a few shots of the table and forces set up on the edge of town. 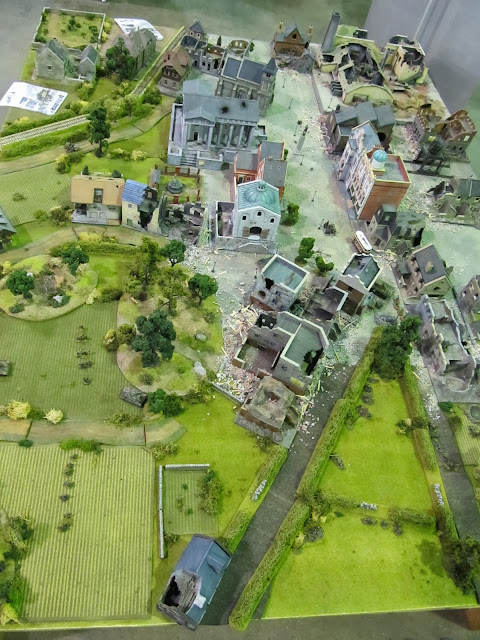 An aerial view of the table. 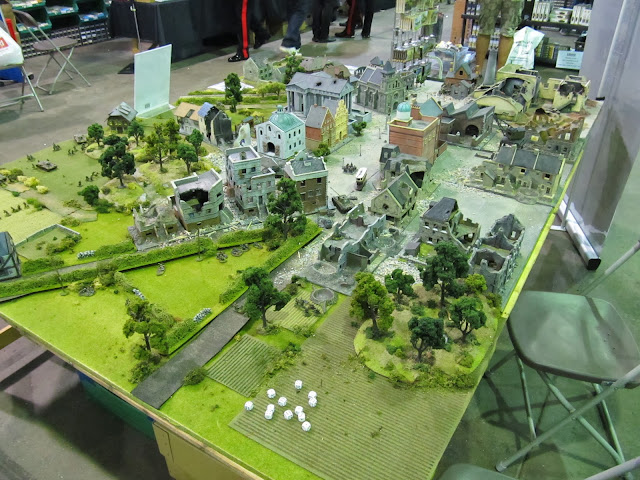 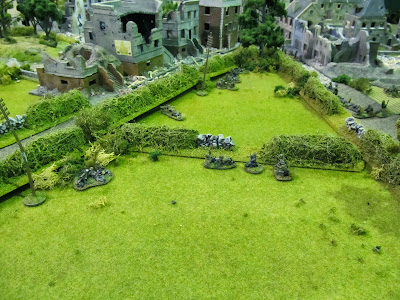 Volksgrenadiers in the hedges on the edge of town, waiting to repell the first enemy probe. It was a 300 pt squad game on one end of the table. 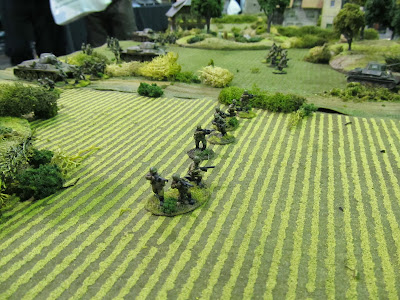 SMG armed Russian infantry dismount to attack on foot across the fields. T-34s rolling on behind. The lurking Panther, the German's only armour. Great things were expected, but they forgot, it was my Panther...and therefore doomed to a bad death, knocked out from behind by a surprise T-34. 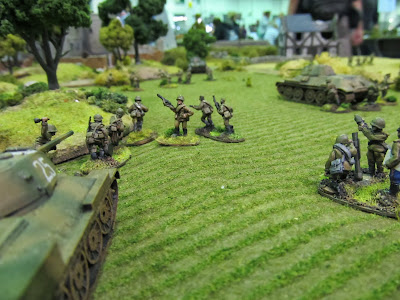 The attack as it gets under way, mortars firing the first barrage. 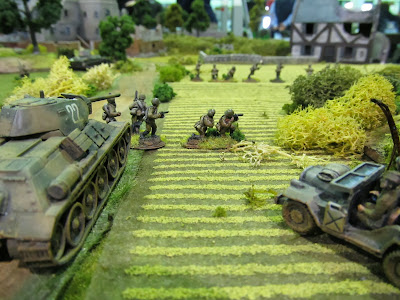 The boss arrives, Russian forward HQ in Gaz jeep. This was before it got cut to peices by MG-42 fire, killing all three crew... best not to be most forward unit if you're the officer in a jeep! 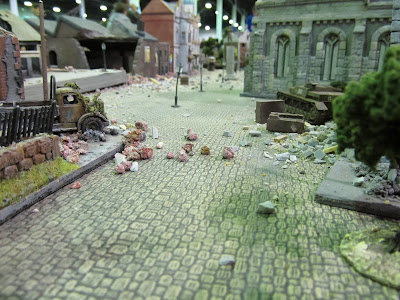 Down this street, tomorrow the Russians will come... in force! Those IS-IIs are warming up their engines....

The first probe was a draw, very closesly fought, so good one player is coming back tomorrow to see the big game. The second was a decisive Russian win, driving in the German defences in a hard fought close assault. The Germans put up a stiff fight, but the new 'Endkampf' counter finished it, with the vengeful Russians only yards away the Volksgrenadiers threw down their weapons and came out with their hands up. Loosing the Panther (after a bold (mad) solo counter-attack that left its side and rear exposed to T-34 fire at close range, did not help). A lesson in how not to use precious German armour.

As for the rest of Derby, in my brief sojourns, the trade stands all look inviting, and few demo games looked cool as... the Syrian armoured brigade vs Israel Centurions was site to behold (how many tanks?). The competiton games were... well... you know - if the first thing I see is a Russian 28mm army with JS-IIs fighting a Russian army with T-34s and BT-7s, or British Guards Armoured 1944 against a 7th Armoured desert force 1942 (on a green table), then I'm out! Very out! What is that? WWII but not as we know it... who needs history in historical gaming? The antithesis of what BG is about... you can still have good, hard fought and entertaining, close games and not just throw history in the bin...

Over the weekend I ran a BGO participation game at Colours in Newbury. Thanks to all who came over to play, or just take a look, or had nice things to say about the table, and/or the rules. Always nice to get good feedback. Whoever it was that said Battlegroup was the best WWII he'd ever played, and they p****d on the others, cheers, you can come again.

The game was a platoon action (500 pts), with the US Infantry forces clashing with 3rd Fallschirmjager at the village of St Martin d'Elle (fictional).

I took the photos on Saturday, so that's the AAR. The US had a second try on sunday. 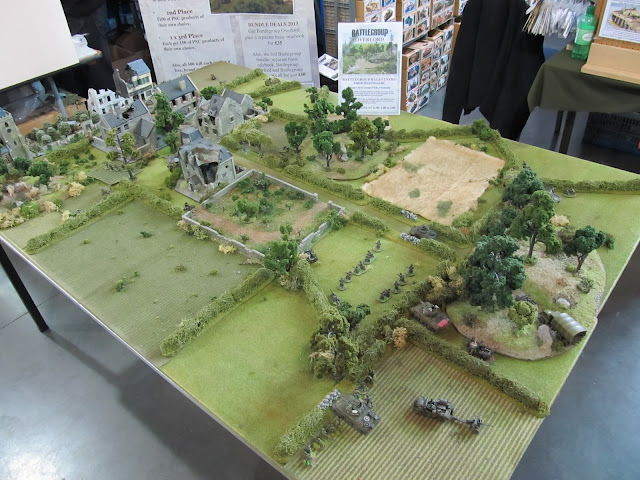 The US attack beginning, in the centre 3rd squad are pressing forwards as a rece jeep lays down some heavy area fire just ahead. The M8 has just entered the narrow lane, and is doomed. 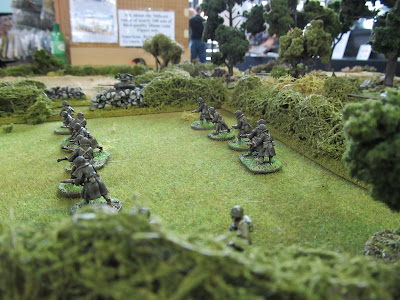 The US forces make their way through the bocage country, either side of the narrow, high-banked green-lane into the village. The Fallschirmjager were rushing into position to block them, digging into the hedgrows and deploying their PaK40 to cover the lane. Their OP team climbed the steps into the church steeple as a 150mm Nebelwerfer team deployed on the rear table edge.

Lacking orders the initial US advance was cautious (read slow), with the Shermans pushing gaps through the hedges. The M8 scout car headed up the lane, much too boldly as the PaK crew lined him up and then vapourised the light armour. Right behind the now burning M8, the M10 rolled up and returned HE fire, pinning the PaK crew who dived for covered as the shooting commenced. 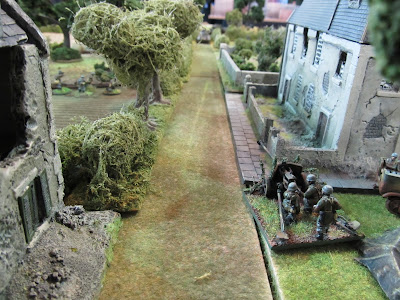 The Germans did not lack orders, rolling a maximum 12 (+2 officers). Their commander threw caution to the wind and counter-attacked. Pushing his squads, StuG and Panhard armoured car forwards to take the fight to the Americans. This aggressive action was ably assisted by 120mm mortar fire in the US centre which caused both infantry teams closeby to hit the dirt and stay there. 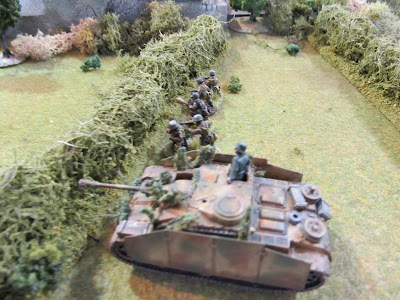 StuG and infantry support on the German left, setting off for their little counter-attack. 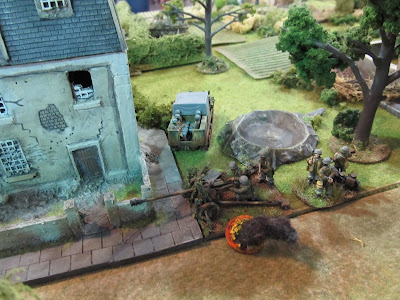 The PaK pinned by the M10's HE fire. The FJ senior officer has moved up and repeatedly used tactical co-ordination to keep the gun crew working, despite the US fire. A risky plan, but it worked. 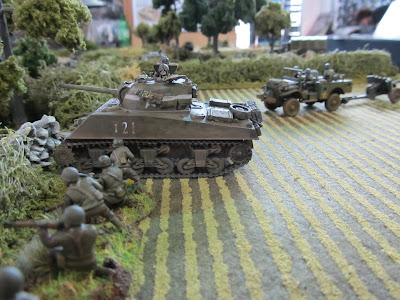 The US forces on their left, 57mm AT gun on the way to support their push through the fields.

On the German right the Panhard armoured car got a little over-keen and tried to engage the US Sherman across the open crop field. When it then tried to advance it was the victim of a stray mine, and was knocked out. The Marder rolled moved in behind it and began an exchange of fire with a US Sherman, which it won after a few turns of missing, scoring its first ever kill (in about 10 battles!). 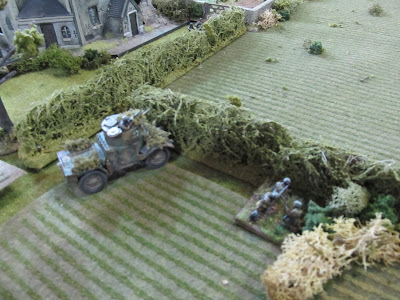 Panhard takes up a firing position on the German right. 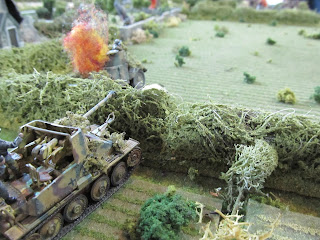 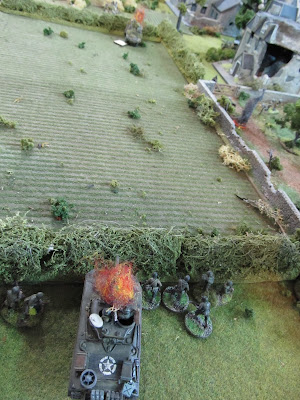 Its victim brews up on the opposite hedge.

On the US right 1st squad and the Platoon HQ jumped off for the woods, only to find them already occupied. The woodline opened up with MG fire and all 3 attacking US units were soon pinned down. Sherman HE fire and off-table 82mm mortars failed to do much damage or pin the defenders, who easily stalled the attack. Later they called down 120mm mortar fire, to add to the carnage. 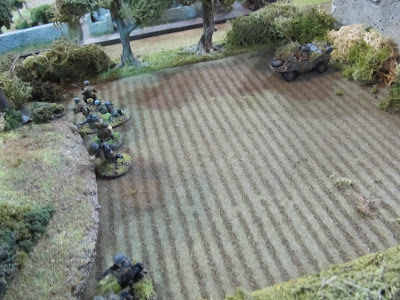 Fallschirmjager race to seize the woods before the cautious US infantry can arrive.
They got their first, with more... and fought off a weak American attack. 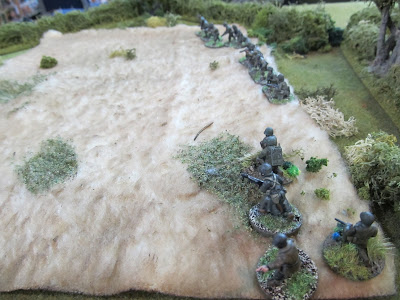 US infantry advance into the cornfield to atack the woods, before a hail of MG and rifle fire sent them to ground. Their attack stalled, and some ineffective 82mm mortar fire didn't help shift the veteran Germans either.

For the US things looked very bleak. Only in the centre was the attack moving forwards, until a Nebelwerfer strike caused carnage and much pinning, and that attack too was halted. There was a brief, hard infantry fight for the orchard, as the US survivors struggled fowards, but a HMG-42 team, and LMG team and another FJ infantry squad soon saw US troops falling back to the cover of the orchard walls. 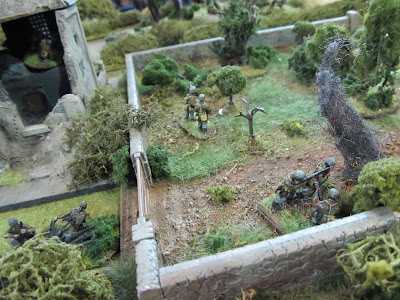 FJ hold the central orchard, but not without losses. The LMG team is pinned, the squad down to two men, but the US fell back rather than take withering losses. That HMG-42 team at the gate scared the US infantry off.

The battle was all but done. The FJ had lived up to their reputation and handed the US attack a heavy defeat. 36 BR lost to just 17. Twice US aircraft overflew the battlefield, but neither time did they pause to put in an attack run. St Martin d'Elle was safely in German hands... until sunday when a second game (repeating this one) threw-up a very different result. This time the US forces dished the damage and probably would have smashed their way into town if time hadn't ended the game (we had to go home sometime). 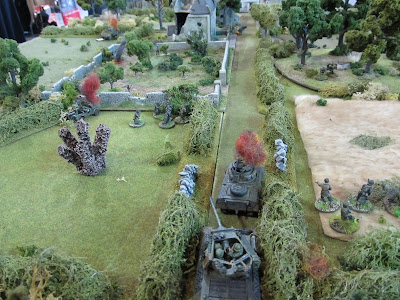 The M10s duels up the lane with the PaK40, it lasted several turns before a 75mm high velocity shell gave the tank destroyer some new ventilation holes. Also, the recce jeep has been knocked out by MG fire from the house. Soon after the Americans withdrew.