We have set a date and theatre for the Battlegroup campaign weekend Ironfist will be running this year - mostly me.

Last year it was a blast, a great weekend of tough but friendly gaming, and I'm looking forward to doing it again. This time, instead of Kursk, we will be running it with Operation Barbarossa.

Here is the poster. Tickets are available from PSC website, in the BG section. There is only space for 15 players a-side, so get in early. You have 8 months to prepare a force, which shouldn't be too difficult at 450 pts per player.

Last year was decisive Russian victory, so the Germans will be looking to even the score this time round. 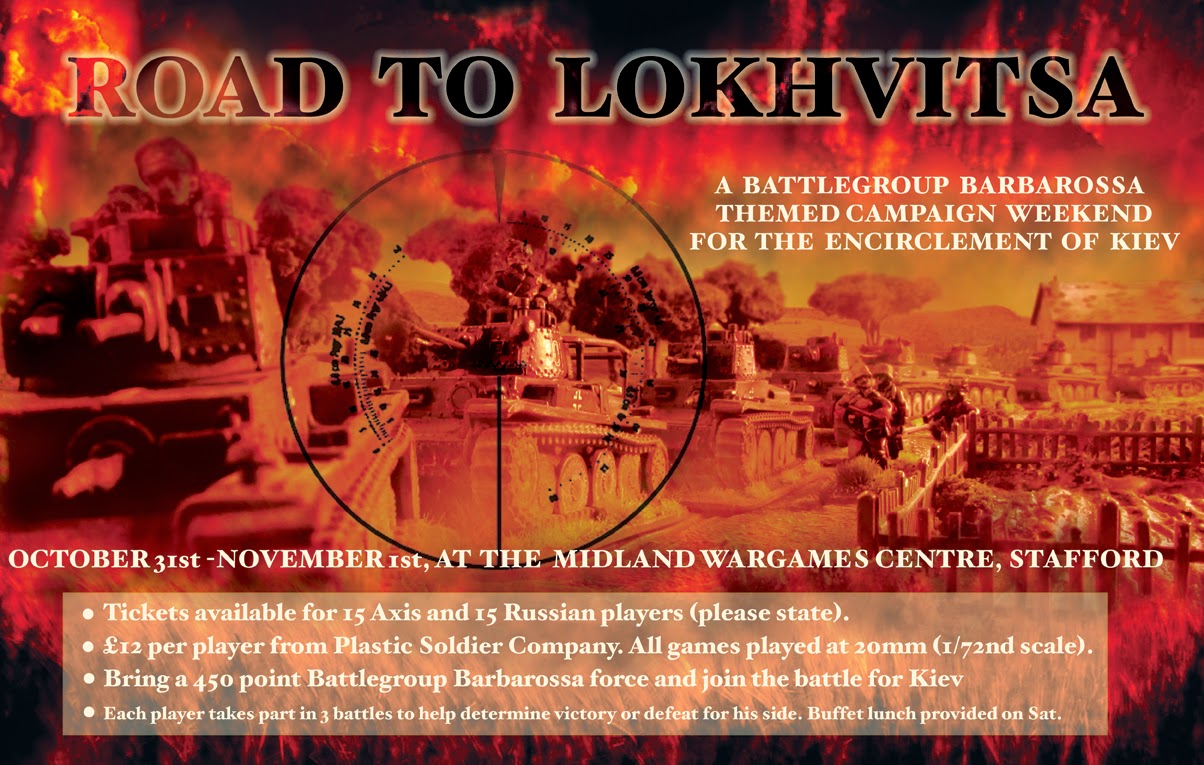 MORE ON THE 8TH ARMY


Over the weekend I sneaked in a few hours of painting and kept up the impetus on the 8th Army project.

First, infantry and vehicle crews are coming along, and the PSC Bren Carriers for the Carrier section are also built, with ‘value gear’ stowage added. The first has been painted, as a test for the others, and it was the only one I had enough head swaps for the crew.

I’ve also added a Bofors gun, which was formerly doing service in my American army, painted green, but hasn’t seen a tabletop in over 10 years. As my late war Americans have other (better) AA options, I thought the Bofors was a bit superfluous and could be re-deployed with a desert re-paint. The US crew from the firing version have been levered off, and need replacing. Not sure what I can use for 8th Army Bofors crew, just some seated guys should do the job, I will have to investigate what is available from SHQ, Britannia, etc. Suggestions welcome! Also, it needs a tow, the actual kit's tow has already been stolen and painted up as captured prime mover for my DAK... just an AEC or OYD truck should be fine.

On completing these models, that’s it, I’ll be out of 8th Army stuff to work on, so next job is to order the next ‘phase’ of kits and infantry. 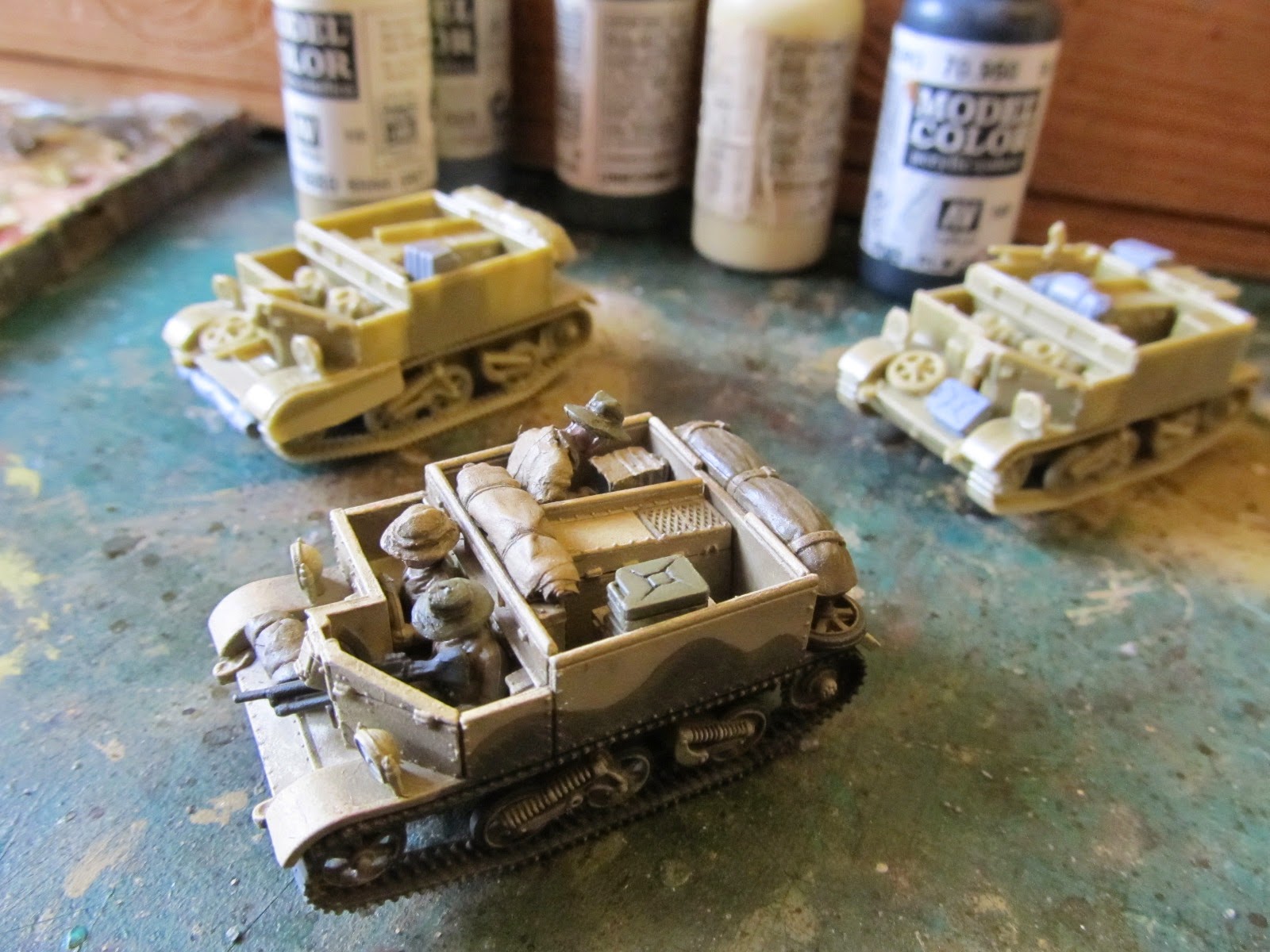 Re-deployed, re-painted Bofors, firing and in travelling modes. Crew might be a problem! Final weathering still required (and fixing the broken wheels) 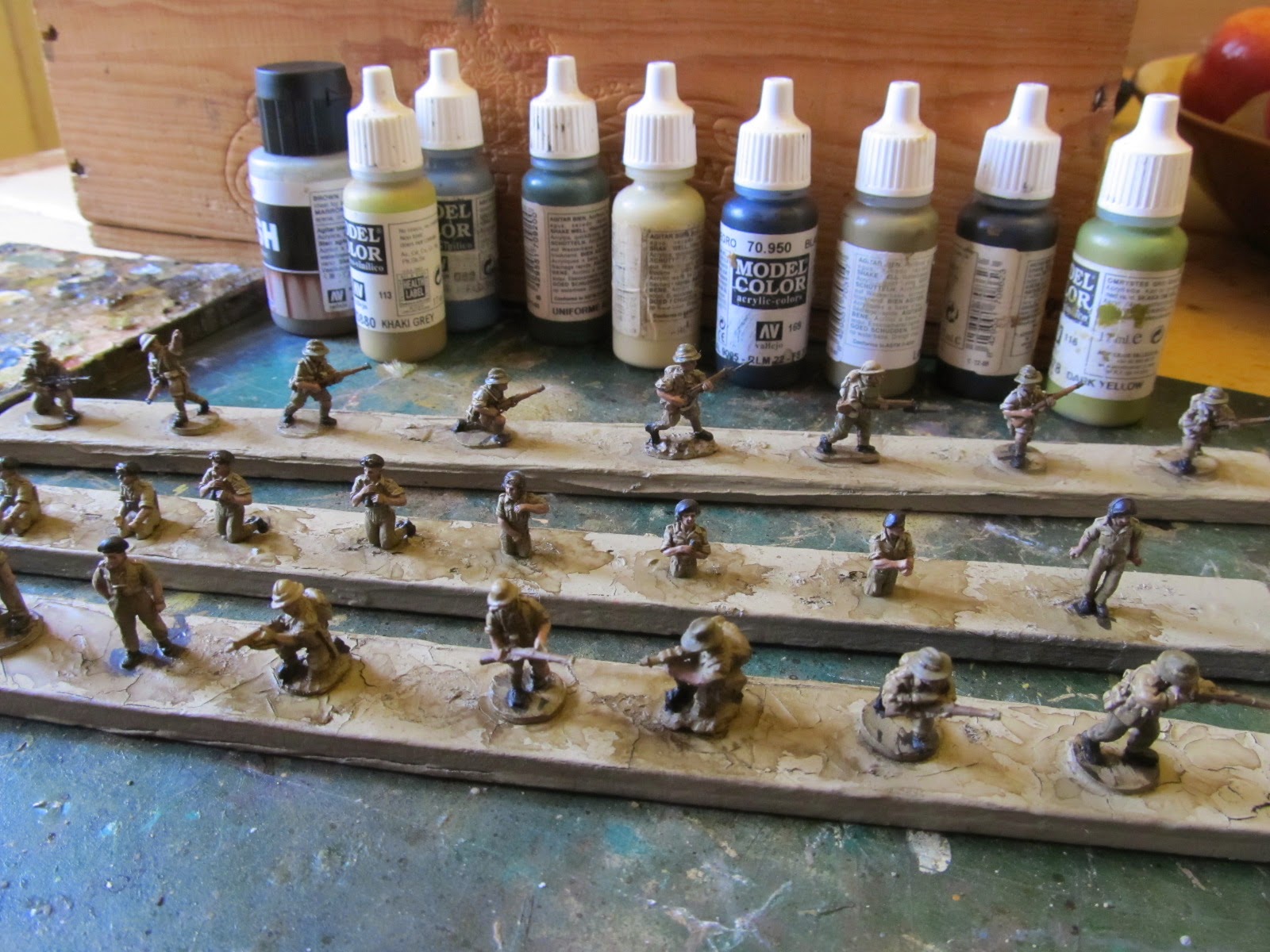 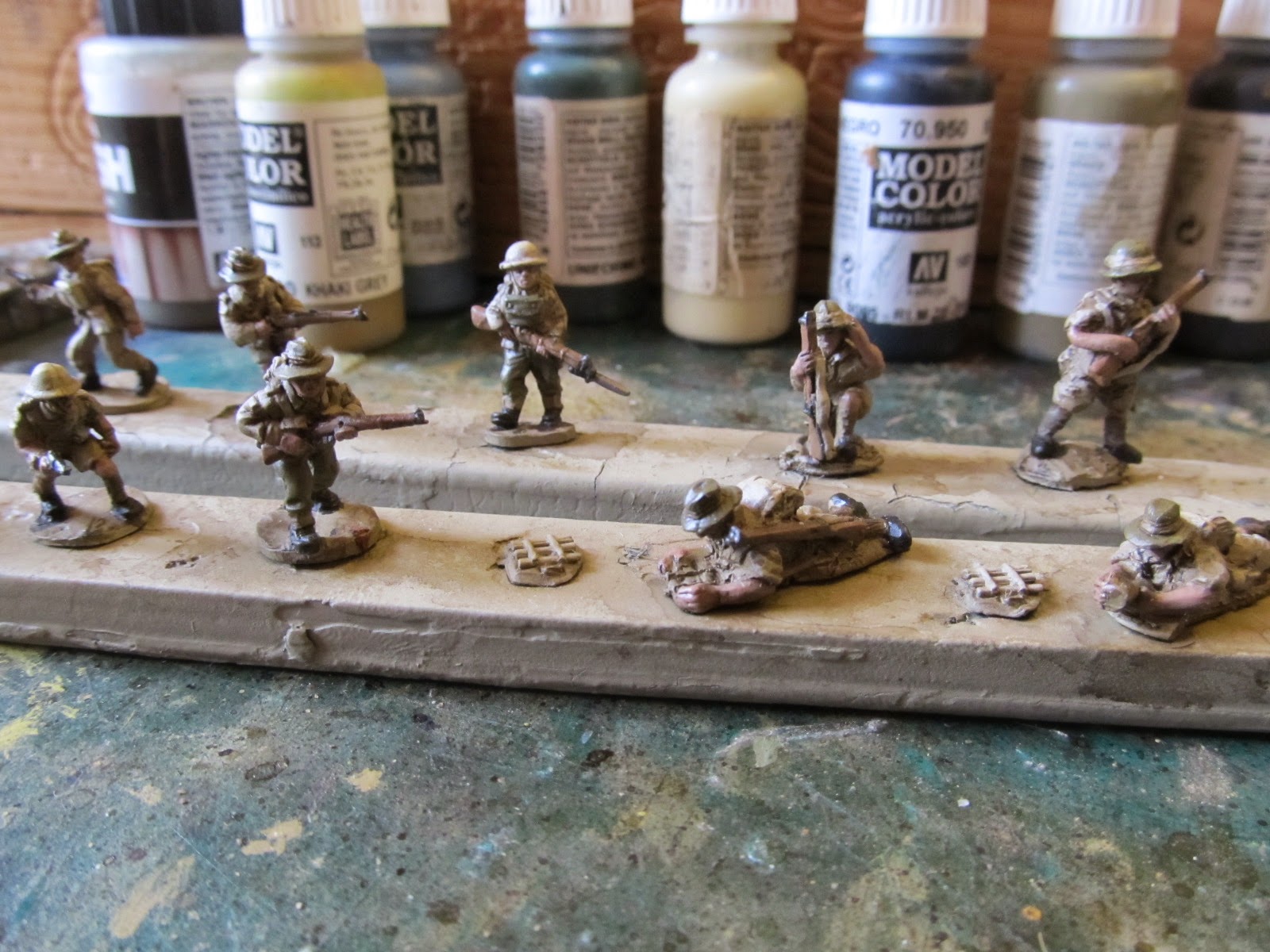 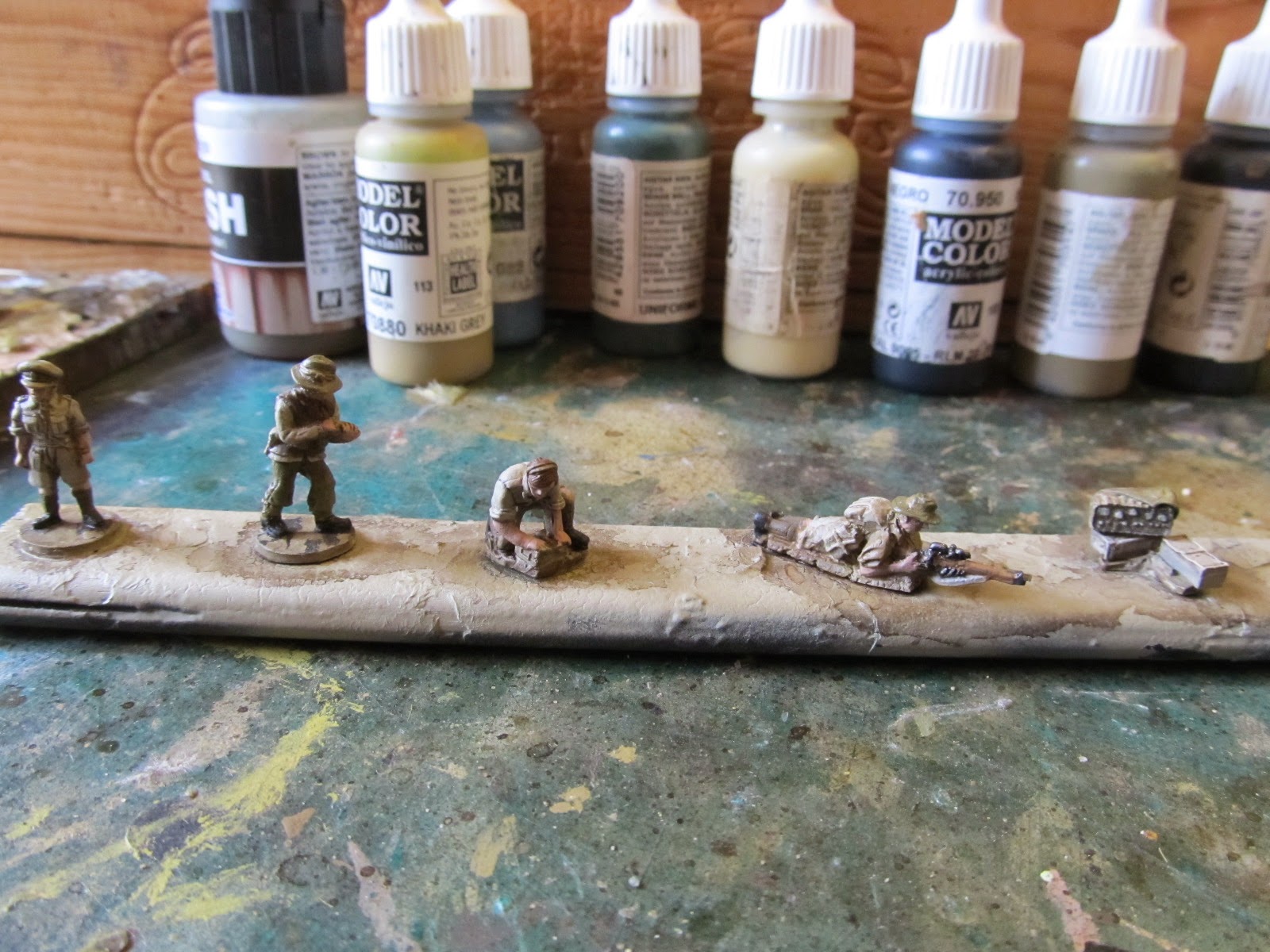 Forward HQ officers and radio op, and a sniper.

First of the 8th Army


It has taken longer than I thought, but I final got my first unit for my 8th Army 1941 project complete. The reason for the delay was mostly the fault of my on-going Crusades project, as I decided my Crusaders army needed some more hitting power (for the play-test games) and so set-to painting up 2 more mounted Knight units. (Using the rather good Conquest games plastics, which I had stored in the ‘to-do’ box for the past 3 years). So, the 8th Army had to go on hold for a few weeks (plus I was waiting for an AB order to arrive from Australia, so I’d have the gun crew).

Well that order arrived (thanks to Nic at Eureka miniatures for casting up the gun crews), and I could get going. The first unit was the fiddly 25 pdr battery. I’m not usually a fan of on-table field artillery, the occasional gun as a stand-in AT gun is OK, but batteries of the stuff  (especially larger ‘medium’ guns and bigger) start to look weird at the ranges games are fought over.

But, for the desert, there are so many stories of artillery standing in as AT guns I decided my 8th Army battlegroup would have to have some. I’ve been careful and designed the guns so they can used on tow or deployed (no turntables and the seated gunner is removable), and the ammo limber is part of the guns loader teams. Each gun has a 4 man crew and a separate 3 man loader team, and the limber is removable for towing.

Well, it’s a start, next on the painting tray are the first Australian infantry and about 10 AB tank crew (for when I have bought the tanks to put them in - need to decdie which tanks first), a forward HQ group, comms relay team, an artillery forward observer team, and a few infantry support weapon teams like an AT rifle and 2” mortar. That will break the back of the infantry painting, but more will be needed to complete a platoon and a carrier section. The carriers (PSC's) are already build, with lots of stowage added, I just need more Australians so I can do head swaps on the crew to give them all bush-hats.

As you can see, the 8th Army is now well on the way, and over the next couple of months I hope to get it finished (yeah right). I’m spurred on by the thought of getting in a first Battlegroup desert play-test game against my DAK. 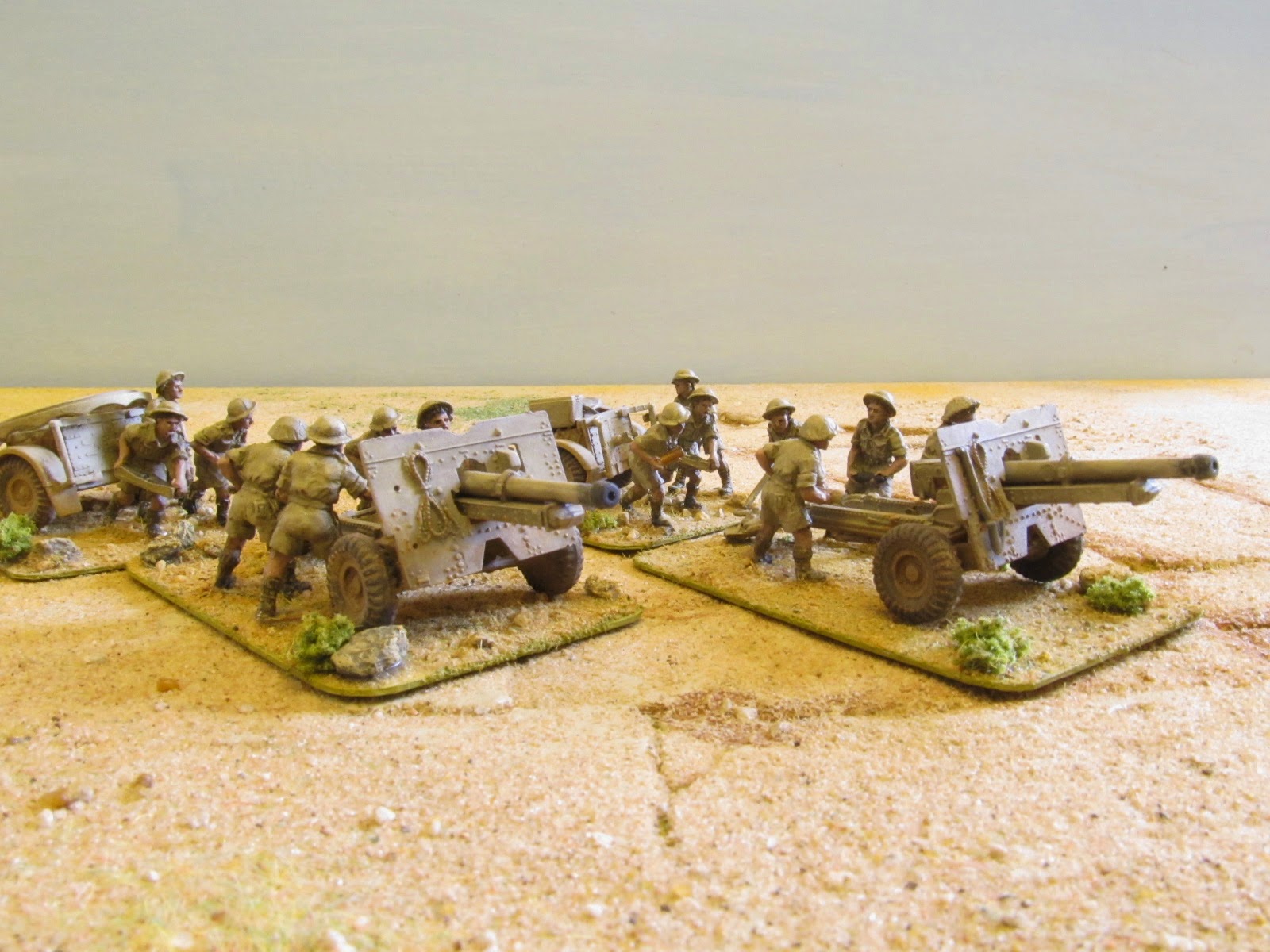 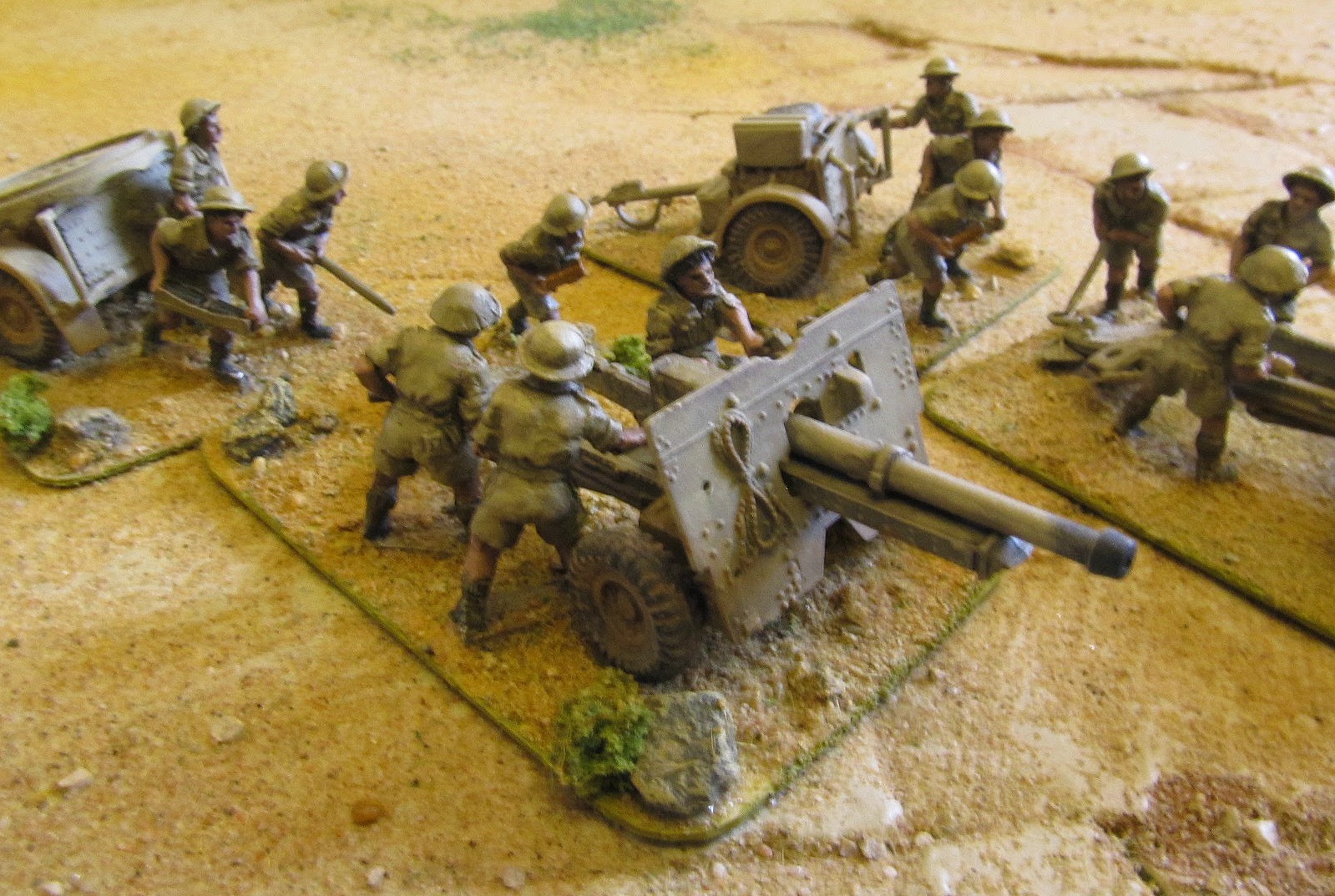 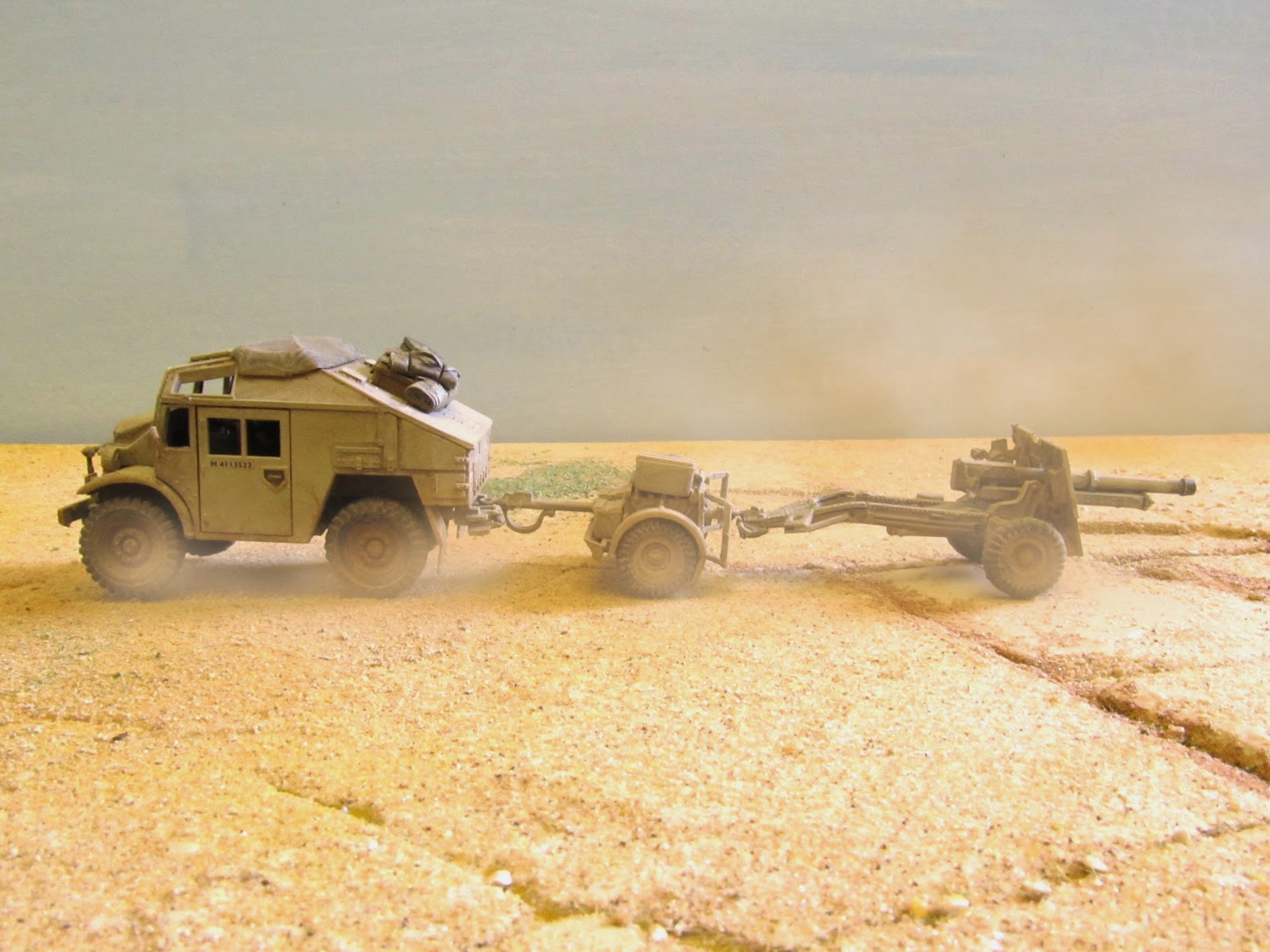 One gun on tow, with added dust, because it looks cool.