The first part of mini-campaign kicked off at Bolton’s Portcullis games store (and a big thanks to all the guys there, especially Brian, who made me welcome). The US forces tasked with clearing the twin farm strong points had a tough time. Here are both battlegroups.

I deployed the Fallschirmjager, with one squad on the right, one in the centre (in fortified bocage) support by the HMG team and Panzerschreck team. The left had the platoon HQ squad and MG team (again in fortified bocage). The third squad would hold Le Mont farm, along with the observer team and the StuG. The extra fourth squad was positioned further back, as our fire-fighter reserve, next to the 80mm mortar. At Hameau Baudet was our Forward HQ, 20mm flak, Nebelwerfer and the Panzer Iv – again acting as a mobile reserve. 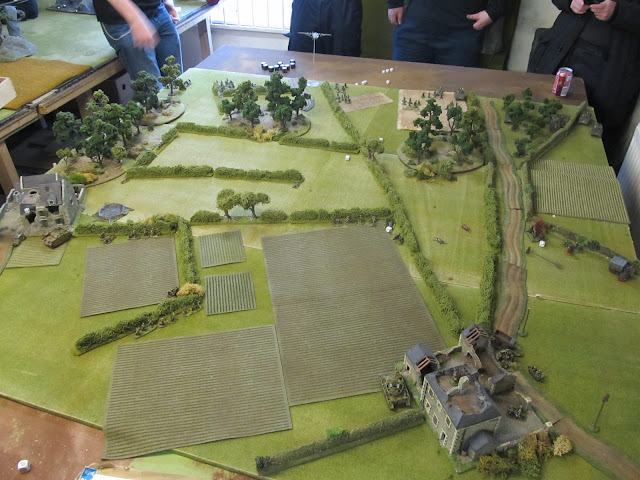 The battlefield from the German lines. Hameau Baudet in the foreground, Le Mont on the left.

The US started well, with their 155mm timed barrage hammering down onto our right flank, destroying the PaK40 in a direct hit and killing two and pinning the squad next to it. Suddenly, the defence of our flank, opposite the main American tank attack, was obliterated. In the centre their infantry headed forwards, rapidly pressing through the woods on the extreme left towards Le Mont. 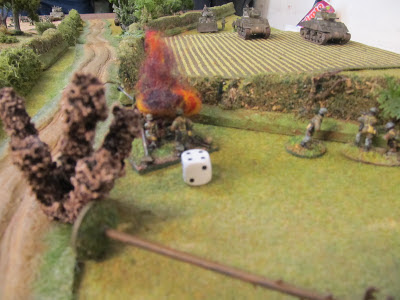 First blood, the PaK40 is history to 155mm shelling 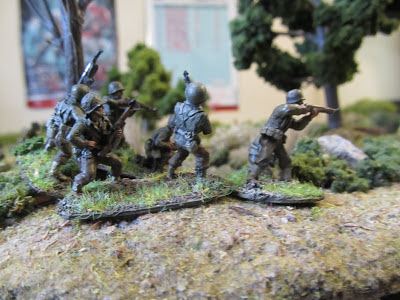 US infantry in the Le Mont woods, yet to walk into the minefield. 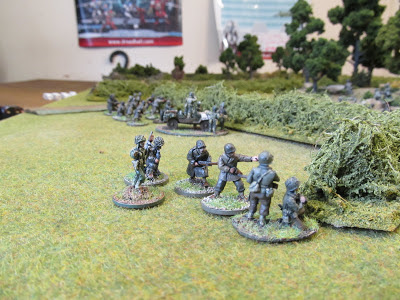 US platoon commander issues his orders, behind is the senior HQ and jeep, later to be killed by mortar fire. 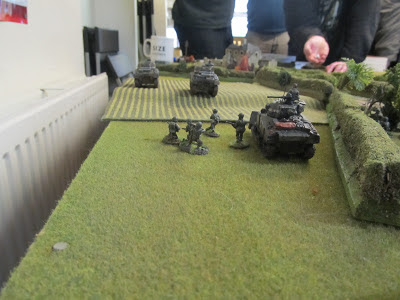 The tank attack on the US left gets rolling, a bold move in this terrain. 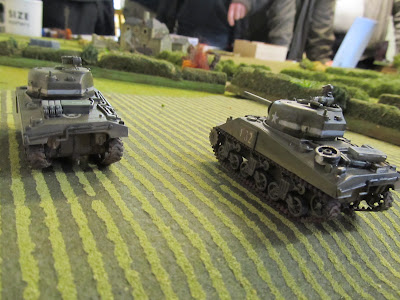 The Fallschirmjager response was, muted. Most front line units went onto ambush fire, to await the arrival of the Americans. The Panzer IV immediate turned round and began pushing through a hedge to get back and cover the non-existent right flank. The Panzerschreck team, with no prospect of having a target, also set off back down the hedgerow to get to le Hameau Baudet, to help on the right.

The Americans continued the artillery barrage in turn 2, with 105 shells directed from their aerial OP team hitting the hedges in the centre and causing more pinning. The infantry advance continued, and the Shermans move up to the blasted hedgerow, lacing it with MG fire that finished off the last of the infantry squad. A single Sherman, lurking in the rear in the orchard launched salvoes of HE fire down the road at the farm, attempting to pin the 20mm flak, which was now taking aim at the Piper Cub, and this sent the crew scurrying for cover.

The Germans continued to dig in deep, used tactical co-ordination to get the 20mm firing, and it in turned drove the Piper Cub off. The Panzer IV got into a new firing position, and lined up the first Sherman, only to miss. The Nebelwerfer opened fire, and its salvo left more Americans hugging the ditched at their end of the table. The two forward snipers also used ambush fire to cause some pinning, and the American advance was starting to stall.

The Shermans, with enemy armour ahead, switched to AP and cut loose, scoring a hit which glanced off that good Krupp steel – phew! The other Sherman continued to harass the farm with long range HE fire, and again the 20mm crew ran for better cover. On their right, the American infantry infiltrating through the woods found a minefield and lost two men to it, but their supporting .30 cal team returned fire at the sniper, and having luckily spotted him, blew him away in blaze of .30 cal fire. Still, no counter for a lost sniper.

The US artillery switched target to hit Le Mont, and although wild it still managed to pin the MG team hiding within its fortified walls. Seeing the defenc e of Le Mont weakened, and with US infantry closing in we moved up our reserve squad to occupy the farm too. Meanwhile, 80mm mortars sent bombs down into the far fields, to keep up the harassment as the werfer reloaded. The Panzer IV continued to miss its two Sherman targets in a display of inept gunnery. 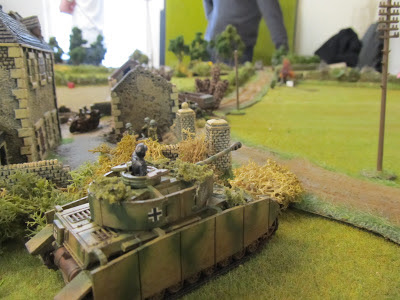 Back the ranges for more training, the Pz IV at Hameau engages the Shermans in the hedge - badly. 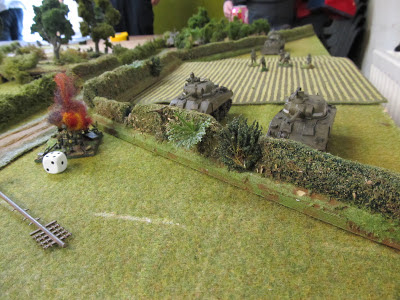 The Sherman targets. Multiple hits bounced on the Panzer IVs armour...unlucky!
The Dozer Sherman in the background pushed through a hedge then broke down in turn 2.

Removing our pinning threw up an air attack counter. So, it seemed the Luftwaffe may put in a rare appearance and, in our next turn, the dice roll of 6 saw the arrival of a Bf109 (no bombs though), to strafe the Americans, who must have thought it was one of their own until it began machine gunning their infantry squads. The return fire from Garands and BARs was ineffective, and the 109 pilot had a clear run in next turn too.  When the US are under air-attack from Luftwaffe, they know it not their day.

The attack on le Mont farm closed in, under cover of .30 cal fire, and more 105mm shells hit the courtyard, obliterating our reserve squad bar 1 man, who took the loss of his comrades badly, and in a heroic action rushed forwards and pinned the closest US squad, MP40 blazing.

The US attack had stalled, there was a lot of pinned units. But the Shermans traded fire again with the Pz IV, and again a hit glanced off. The fourth Sherman, with tank riders on board, began to push up the lane to join the fight, but unluckily hit a mine strike, and detonated sky high, with casualties on the riders too. It smoking wreck blocked the lane.

More 105 shells landed, but this time to no effect, and the American turn was over, with little achieved. The counters were building up on that side of the table too.

The defenders continued the fight, with the Panzer IV actually hitting this turn, and also glancing (what were these AP shells made of?). The brave Panzerschreck team was now stalking  along a hedge to get in range of the Shermans. The 20mm flak again targeted the Piper Cub, and although it couldn’t damage it, 20mm shells kept the aircraft pinned. The Bf109 swept in again and machine gunned the woods at le Mont, pinning the US infantry again. That flank attack could not get going, even though the farm was so lightly held. On our right, the Panzerschreck team broke covered, took aim and blew-up a Sherman in the hedge. The counter for that loss broke the American battle rating of 38. It was game over. The Fallshirmjager had reached 26, only half way, so a solid victory. Le Mont and Hameau Baudet (well the rubble of them) had held.

Elite infantry had proved their worth in solid defence - unshiftable. Casualties amount to 14 men, a PaK40 and crew and a Kubelwagen. Harsh on the Americans, who had suffered from the counters. The Germans pulled the special ones (5 in all, including 2 air attacks), and they had pulled the higher numbers. Obviously, their inexperienced infantry had not really fancied the odds today vs the vaunted Fallschirmjager.

For the campaign, I decided to issued victory points based on BR lost. For each full 5 BR lost by the enemy, each side would get 1 victory point. The winner would get a bonus +2 VPs too. So, for this game, the Germans had amassed 9 VPs, to the American’s 5.

On to game two, in Wolverhampton... (coming soon)

THE BATTLE FOR VILLIERS FOSSARD

THE BATTLE FOR VILLIERS FOSSARD
No posts of late, due to the demands of book production, which is happily now complete. This frees me up to do some gaming – hurrah!

On Saturday 9th March, I’ll be running a demo-game of Battlegroup Overlord at the Portcullis games store in Bolton. On Sunday 10th, I’ll be running another demo-game of BGO at the WMMS show in Wolverhampton, close to the PSC sales stand. Do come and say hello. To keep interest up, these two games are going to be linked (along with a planned third to follow), into a mini-campaign – ‘the Battle for Villiers Fossard’. This is mainly a chance for me to get some good use for my US and Fallschirmjager collections.

Villiers Fossard is a small hamlet north of St Lo, in the heart of the bocage country, and it was defended by elements of 3rd Fallschirmjager Division during the American drive to capture St Lo in July, 1944. My mini-campaign will recreate the heavy fighting for the village on July 11th, with the US 29th Infantry Division attacking in force against the embattled, dug-in, defenders.

The first battle (at Bolton) will be for the morning’s fighting, to clear the twin farms at Hameau Baudet and Le Mont, just north of the village itself. Capturing these two strongpoints will allow for the afternoon attack (the second game at WMMS) over le Jouenne stream (little more than a big drainage ditch really, but enough to stop armour) into the buildings of Villiers Fossard itself. Once over the stream, and with the village captured, the third battle (to follow in a week or so) will be to halt a strong counter-attack against the village from the west, led by more Fallschirmjager, that evening. Whichever side wins the most games, by the biggest margin of BR, will be the overall victor.

I’ll write up full AAR for all three games to post here, but if you’re in the Bolton area, or at WMMS on Sunday, do come along and see how the battles are taking shape.More will follow soon...