Today IFP and PSC are announcing our first Battlegroup gaming event, to take place at Stafford Games on the weekend of October 18th-19th. It will be a Battlegroup Kursk campaign weekend, set during the furious battle for the strategic town of Ponyri on July 6th-7th, 1943. All games to played at 20mm (1/72nd or 1/76th scale) - we have more terrain for this size.

Each player (there is room for 16 aside) will take the role of a 600 pt Battlegroup commander and over the course of three games (2 on Saturday, 1 on Sunday), fight to earn victories and 'campaign points' for his side. Your forces will play a small role in gaining overall victory (or defeat) for your side (just like real life).

It isn't a tournament as such, with players trying to become the overall individual winner, it's a team game, and it'll have far better historical authenticity that any tournament, because all players will using forces from the BG Kursk army list, and so will only be using forces that were actual there (or available) for both sides. It will still have a bit of the competitive edge though... because your battlegroup's performance contributes to the final result. In the end, one side will be crowned as victors and there will be a medal for the player that earns the most points for his side, be it Russian or German.

To me, this is a way of keeping some historical-edge to the games and getting away from some of the a-historical nonsense of most WW2 tournaments I have seen. In the future, we'll try to do other events for other theatres, with Normandy being a big favourite - although we'd need to think of ways of providing enough terrain (and hedges) for that theatre.

Anyhow, tickets go on sale today from PSC website, with 16 available for the Germans and 16 for the Russians.  I'll be there as the campaign referee and hopefully so will Piers. Will from PSC is hoping to play on the Germans side - so that should be three solid wins for the Russians! I'll be a fine weekend of furious and fun gaming, chat (a buffet lunch on Saturday) and an evening social in the pub for those interested. It's a great chance to meet other BG players.

I'm only sorry I won't be playing my Russians in it, but I'm sure the Russian comrades will do me proud! (I'm not biased or anything).

Tickets are on sale from the PSC webstore: www.theplasticsoldiercompany.co.uk at £12 each (that just covers our hall hire, lunch and a few other expenses).

Here is the poster, spread the word and hopefully, see you in October. 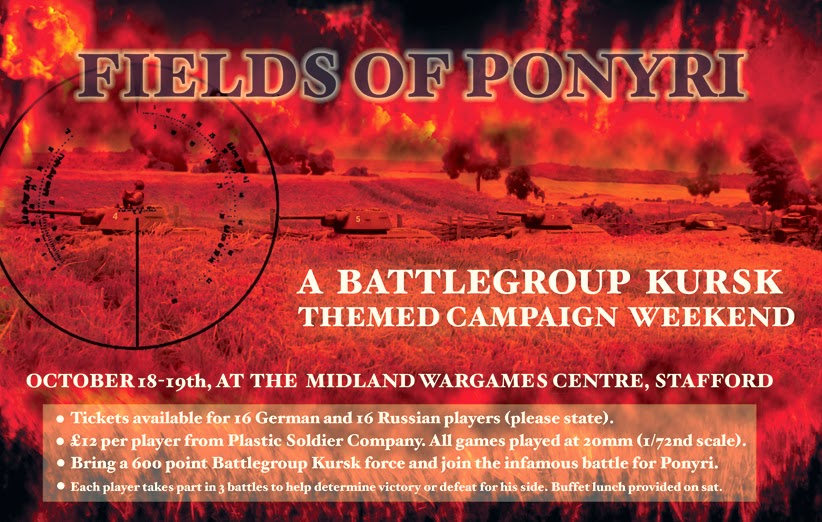 Here is our first game of Longstreet, after 4 months of painting up the forces. This game, set in 1863, was a meeting engagement, just using all the forces we had ready, as a rules initiation. Neither of us had played before, so the going was slow for the first half of the battle, with much flicking through the rule book and double checking. By the end, we were flying along in quick turns.

The game saw the Confederates moving up to secure a foothold over Goatwalk Creek at the hamlet of McCarthy’s Bridge, with its wooden bridge and the ford at Gomer’s Mill. The Union brigade were moving up to intercept and drive them back.

So both sides started in marching columns, guns limbered, cavalry column leading the way. The Union soon stole a march by using repeated quick march ‘At the Double’ cards to get their regiments forward faster and their gun battery (1 Napoleon, 1 light rifle and 1 howitzer – to test all the rules), upon onto Cemetery Hill, overlooking the creek and McCarthy’s Bridge, a fine position for a gunnery commander. 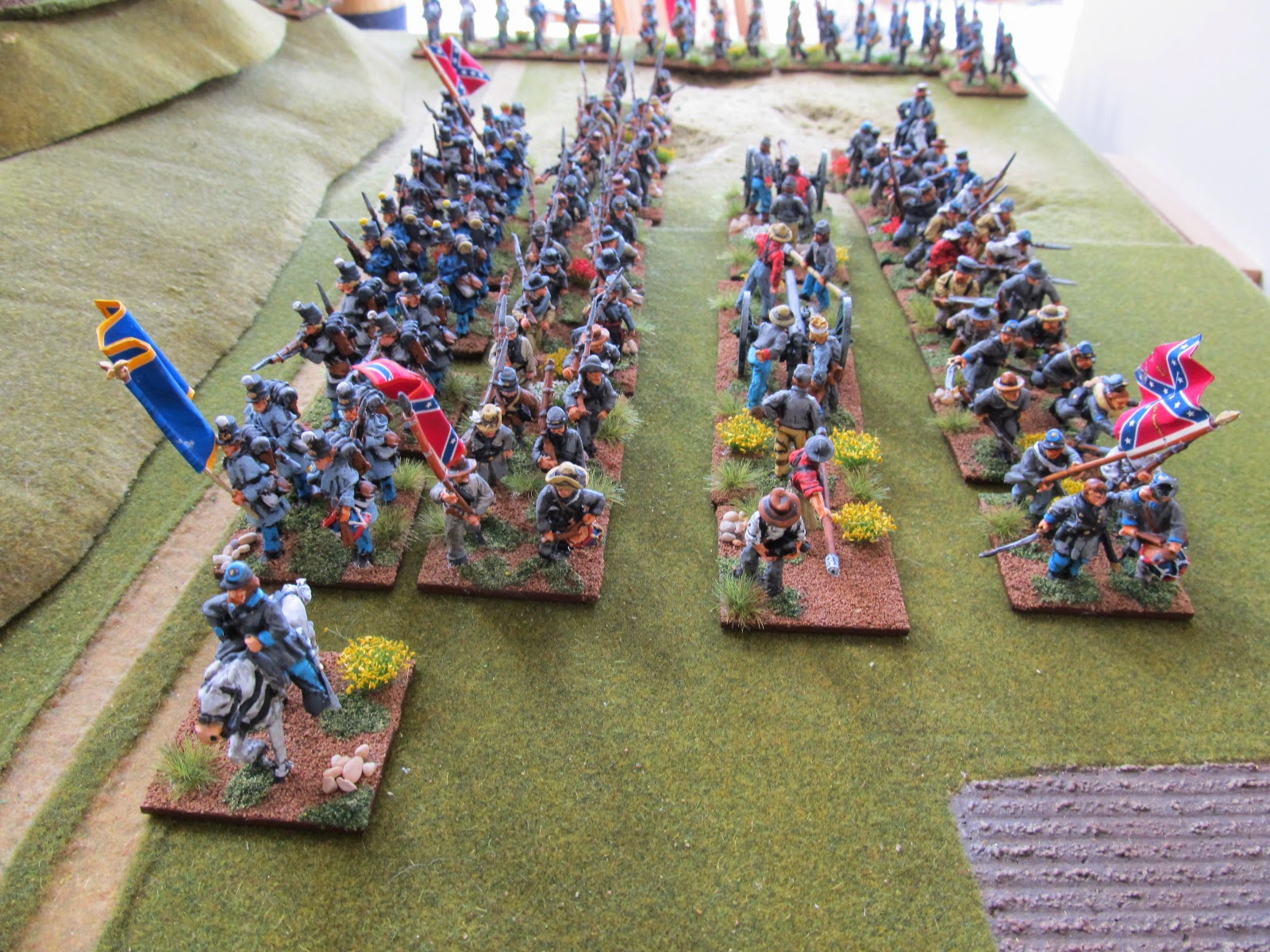 Confederate Regiments on the march 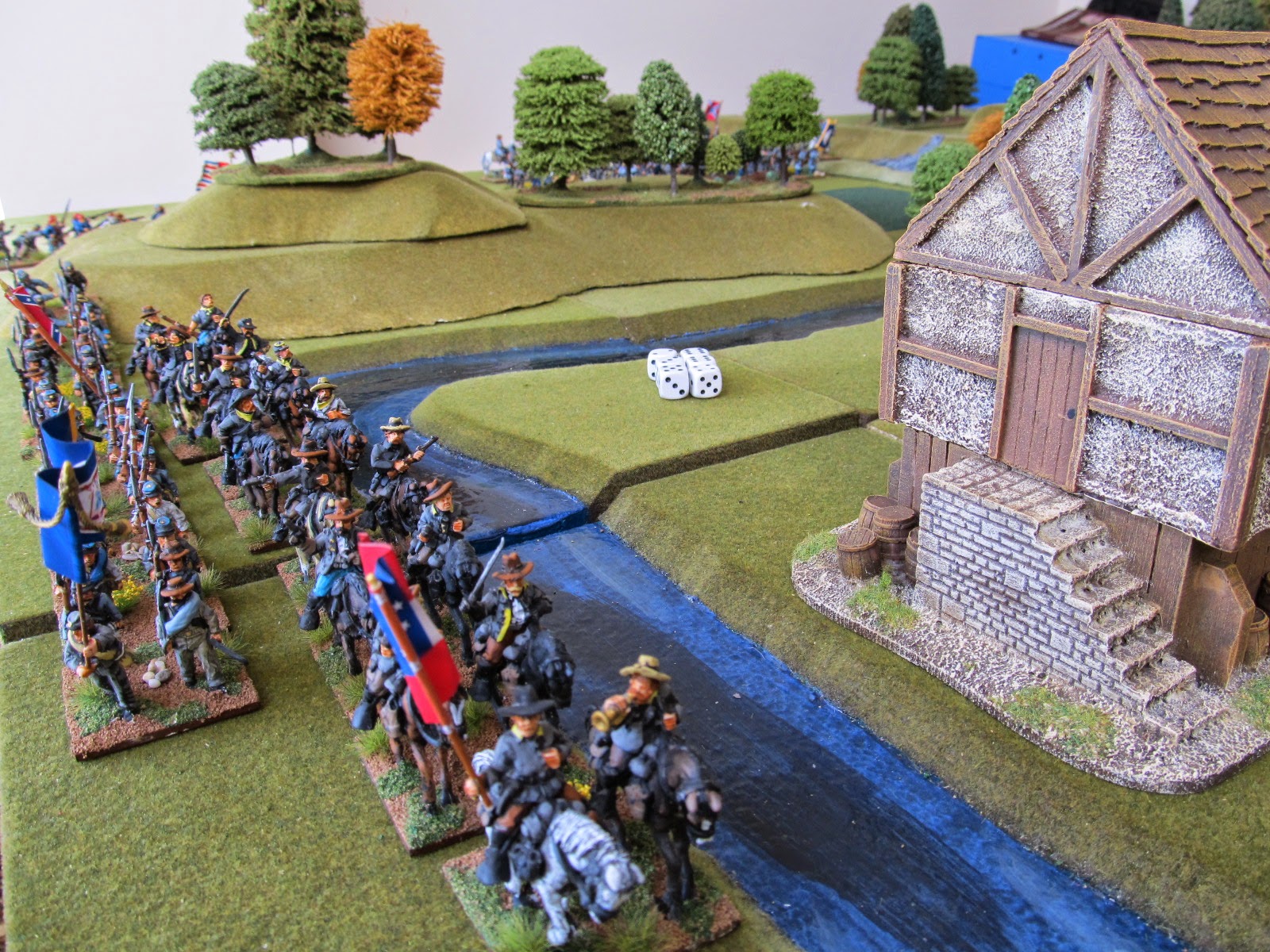 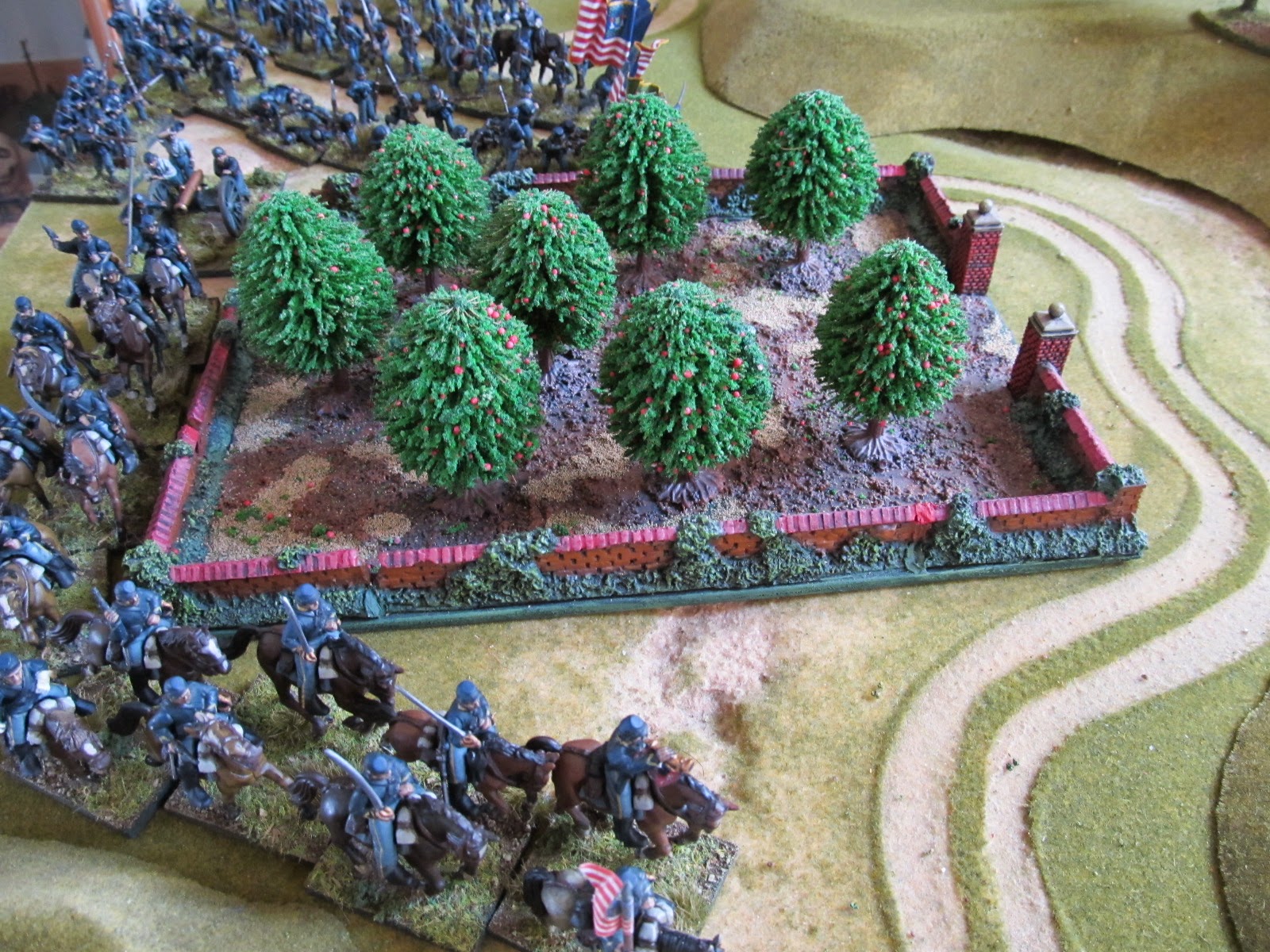 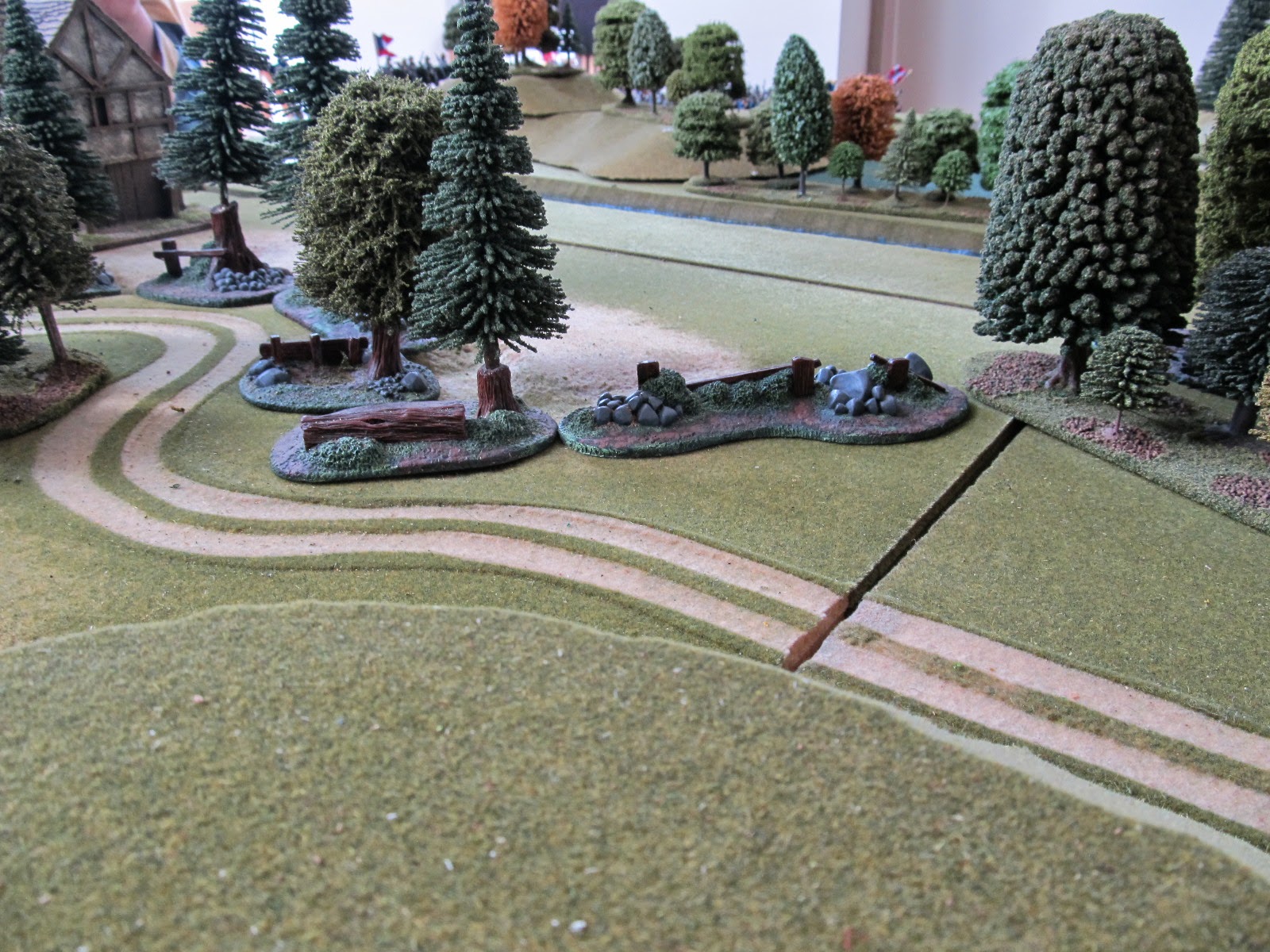 Union view through the woods towards Gomer's Mill and the creek

The Union cavalry galloped up to the bridge only to find it down, having collapsed, and so swerved away along the creek, looking for the other crossing at Gomer’s Mill. Meanwhile, the Rebs split into two groups. Cavalry, slowed by their commander questioning his orders to seize the ford, assisted by one infantry regiment heading for the ford, the rest had the bridge as their objective. A bad day for the Reb horsemen was about to begin.  Also, the southerner’s gun battery (only 2 guns) also went the long way round, found difficult ground and had to turn back, leaving them well out of the initial phases of the battle. 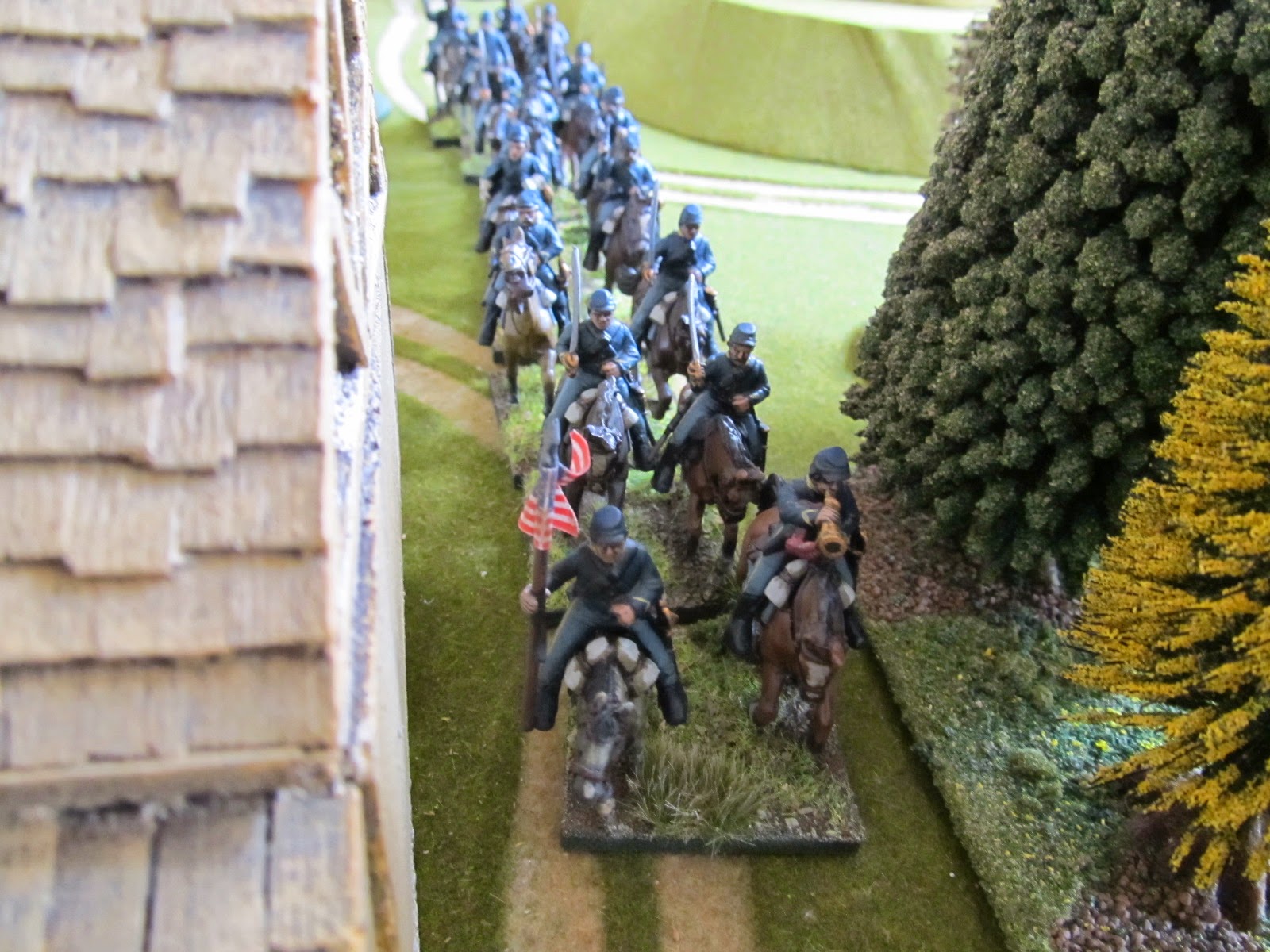 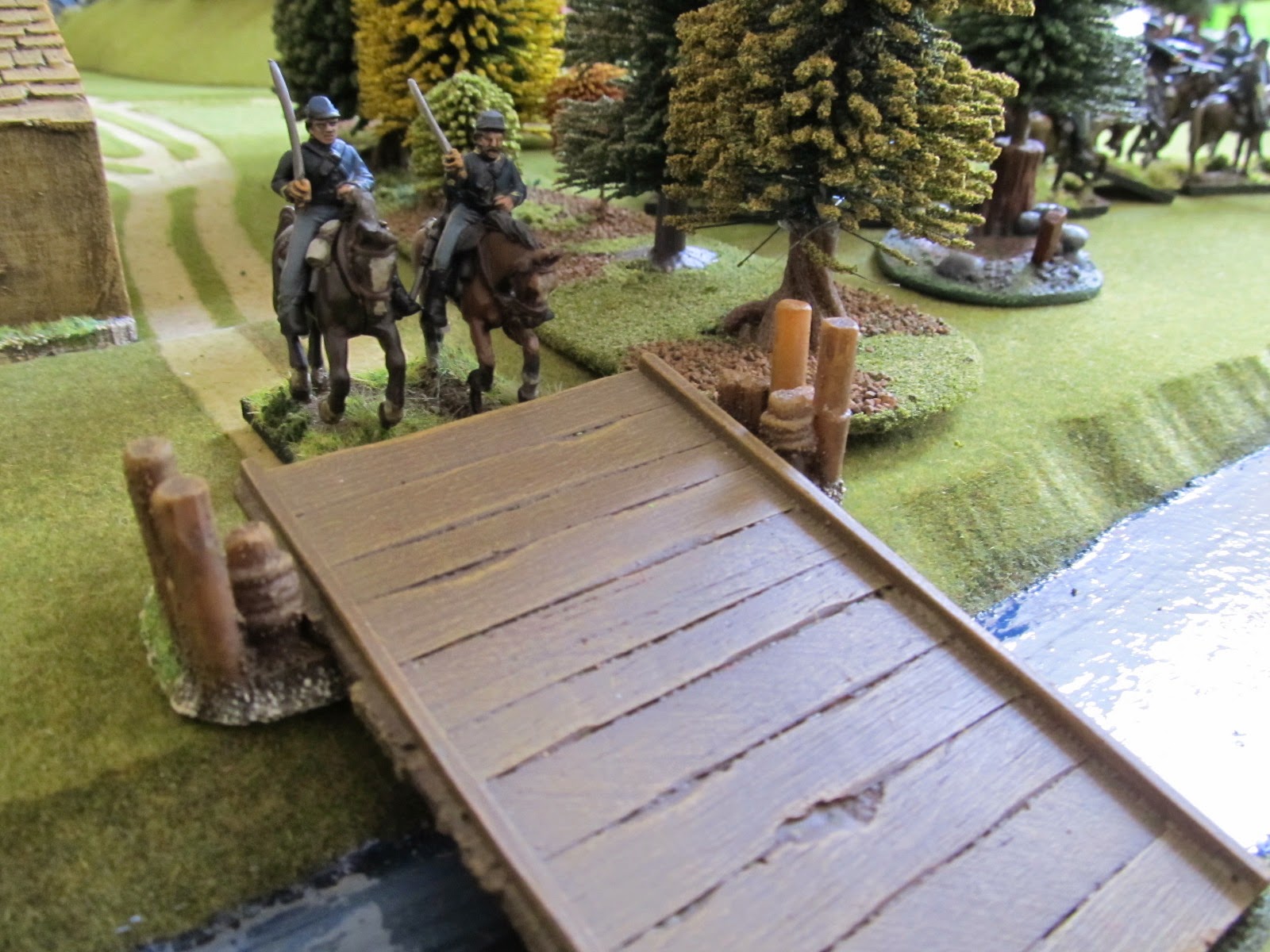 To find the bridge has collapsed 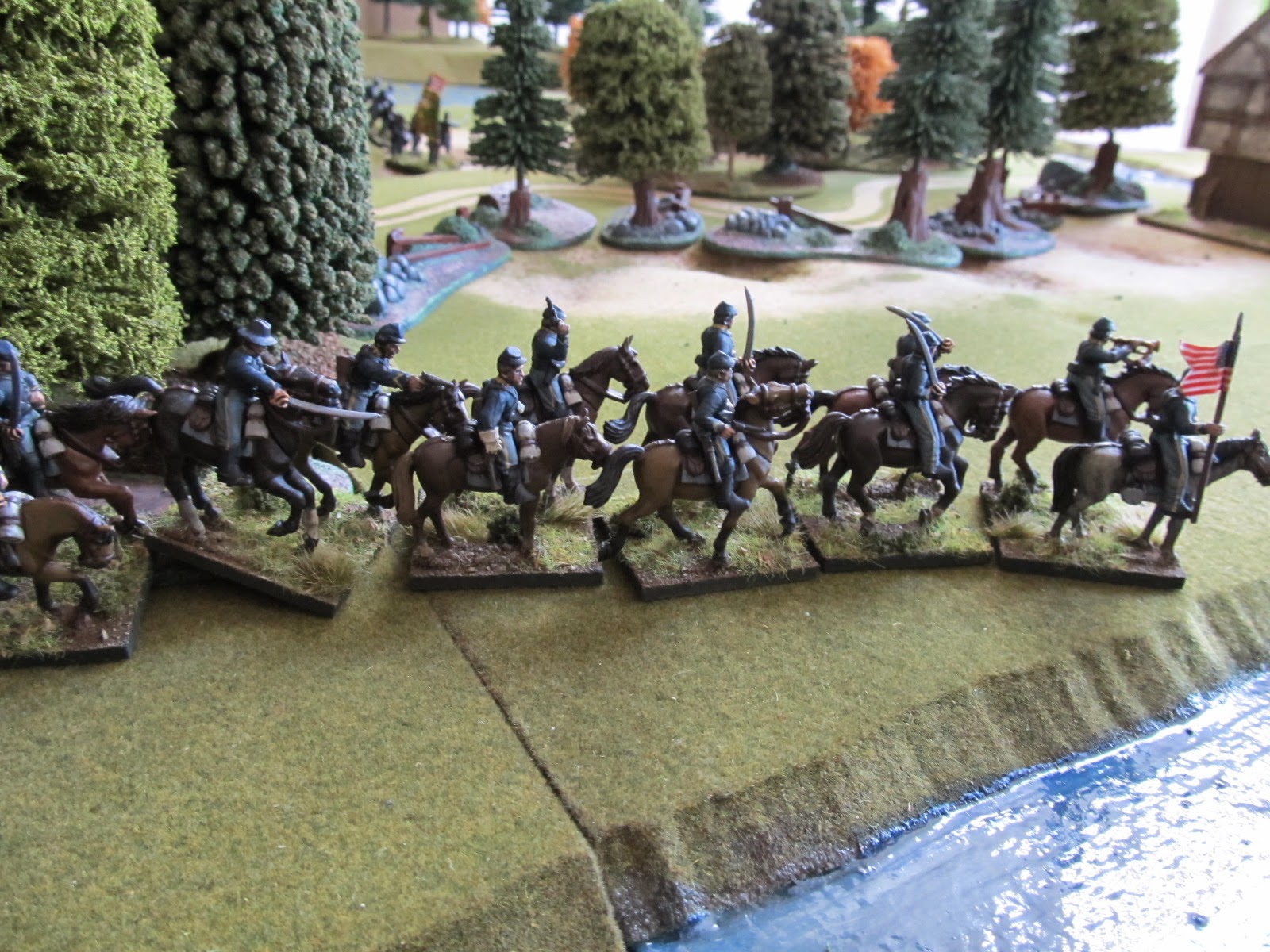 So the via off up the creek to find another crossing 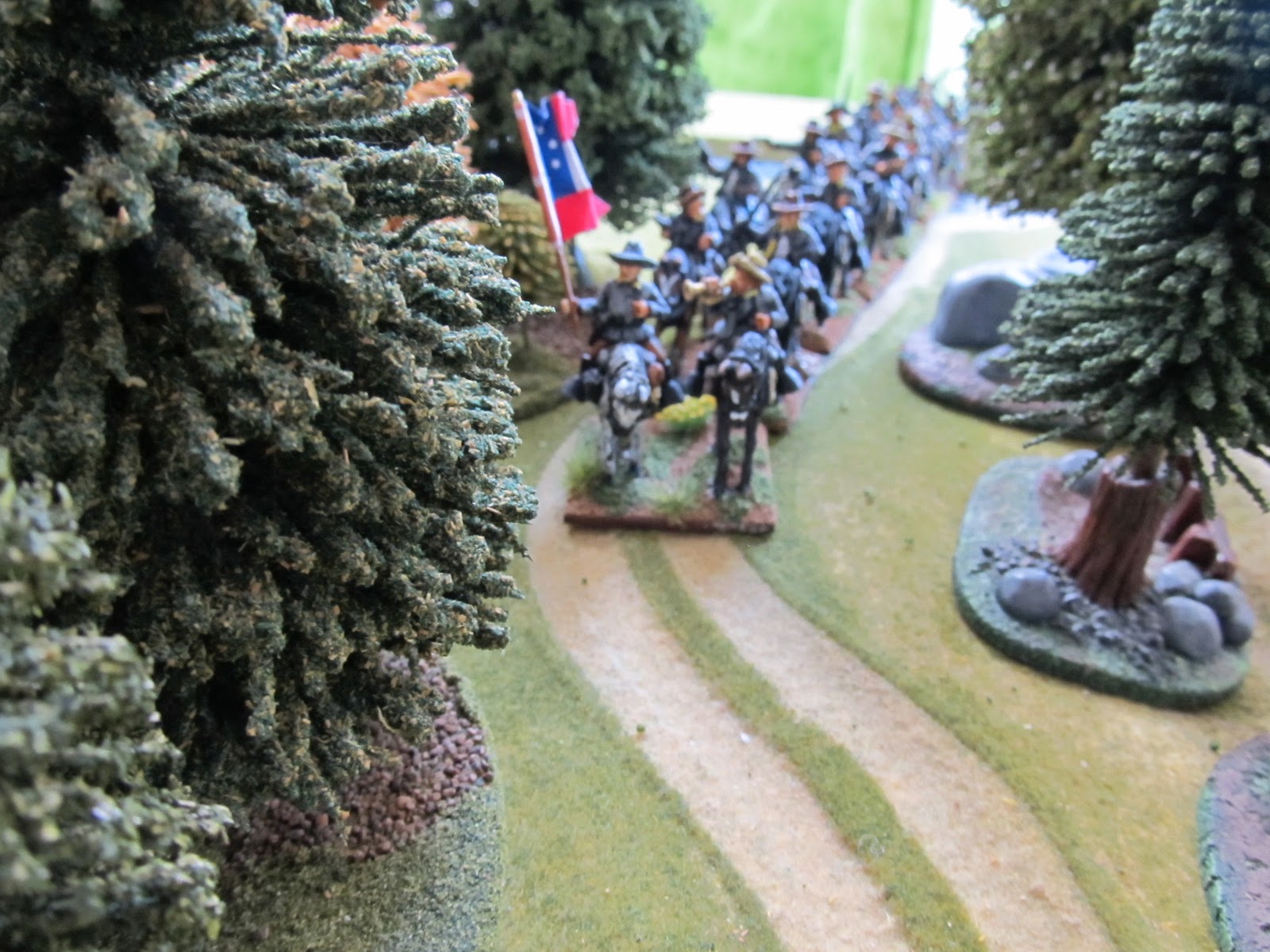 The first shots of the battle were fired from Cemetery Hill, hitting the Reb infantry down at Gomer’s Mill and causing some losses, as the two sides finally spied each other in the thick woodlands of the area and deployed into lines of battle. Musket shots soon rang out, to little affect, although the Reb cavalry commander was hit by a lurking Union skirmisher watching the wood trail, and this left his side struggling for cards for a turn (its special card that means a commander’s loss causes delays). 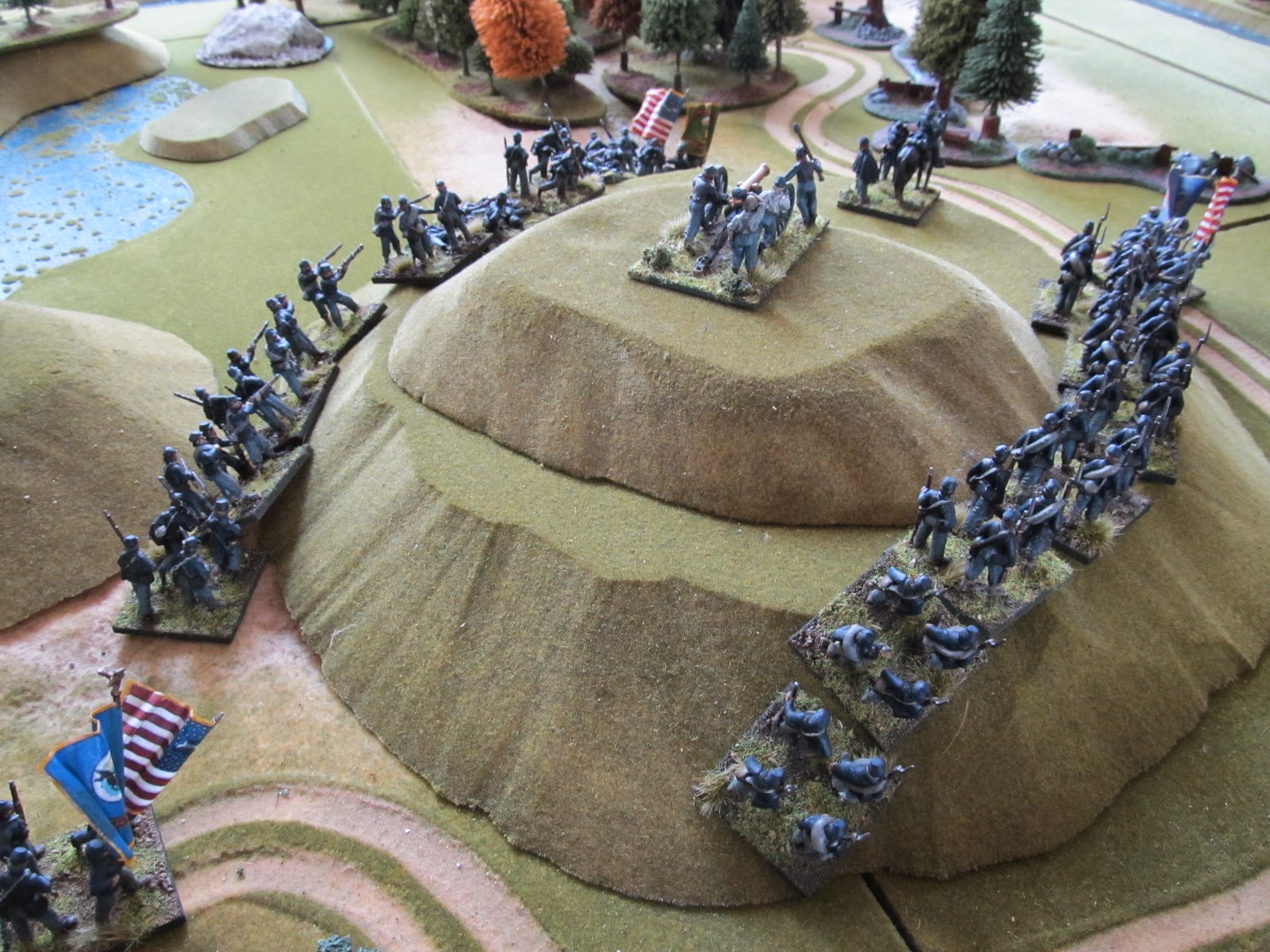 Over Cemetary Hill, with the guns reaching the top.

The Union had the upper hand in the first skirmishes, as the New York Irish regiment swept through the woods, the Reb cavalry running before them, only to be shot up in the flank by the Ohio boy’s first volley. The surviving Reb cavalry, in a very bad position, quickly withdrew, crashed back through the creek and away behind the forming Reb lines. The Union cavalry, spying their first Reb infantry at Gomer’s Mill, boldly sounded the charge, then discovered charging formed infantry to the front was a bad idea, lost the combat, withdrew and then, chased by miniballs, turned about and withdrew back behind the now formed blue infantry lines. 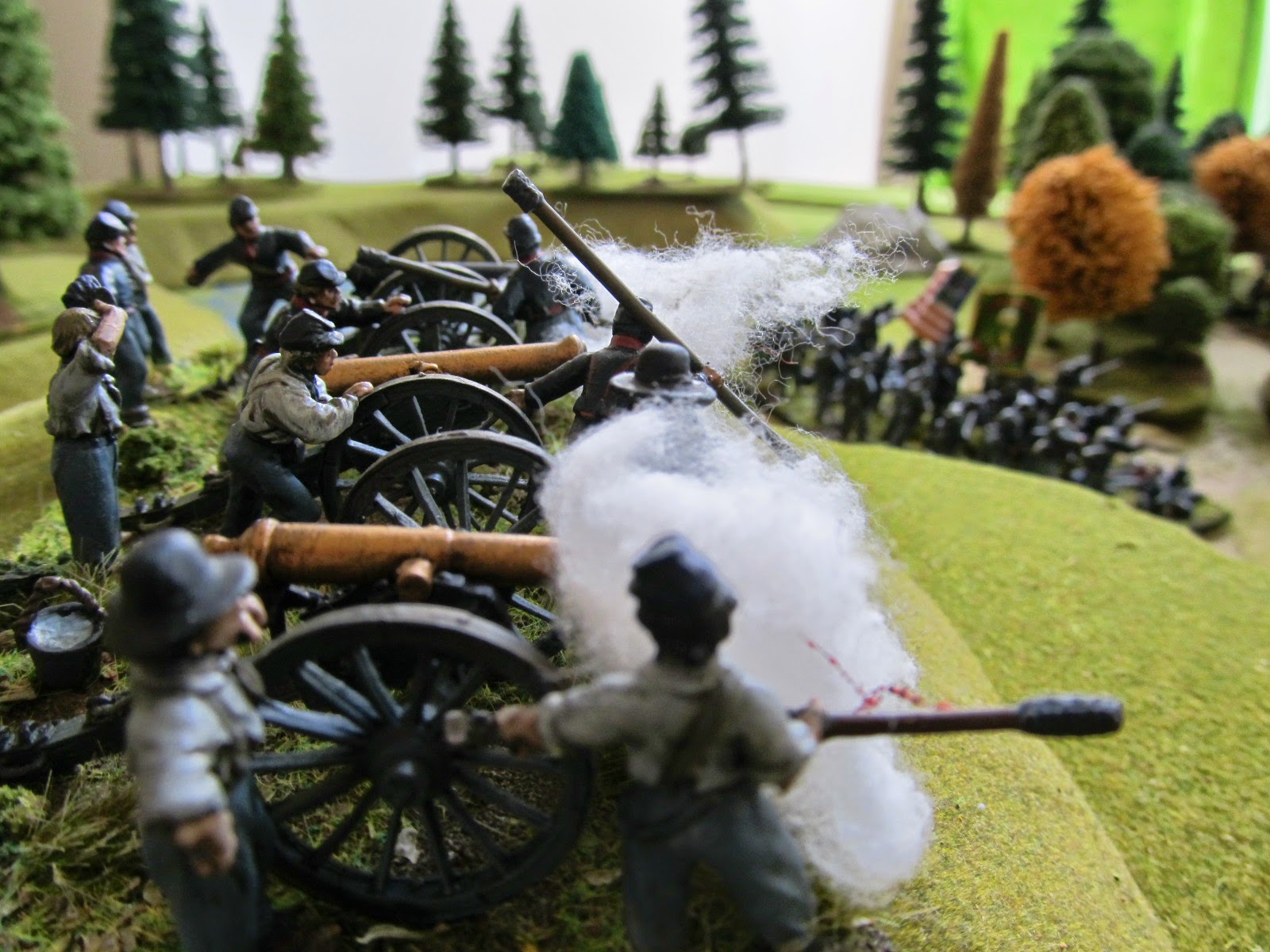 Guns now on the high ground, they open fire, first blood to the Union 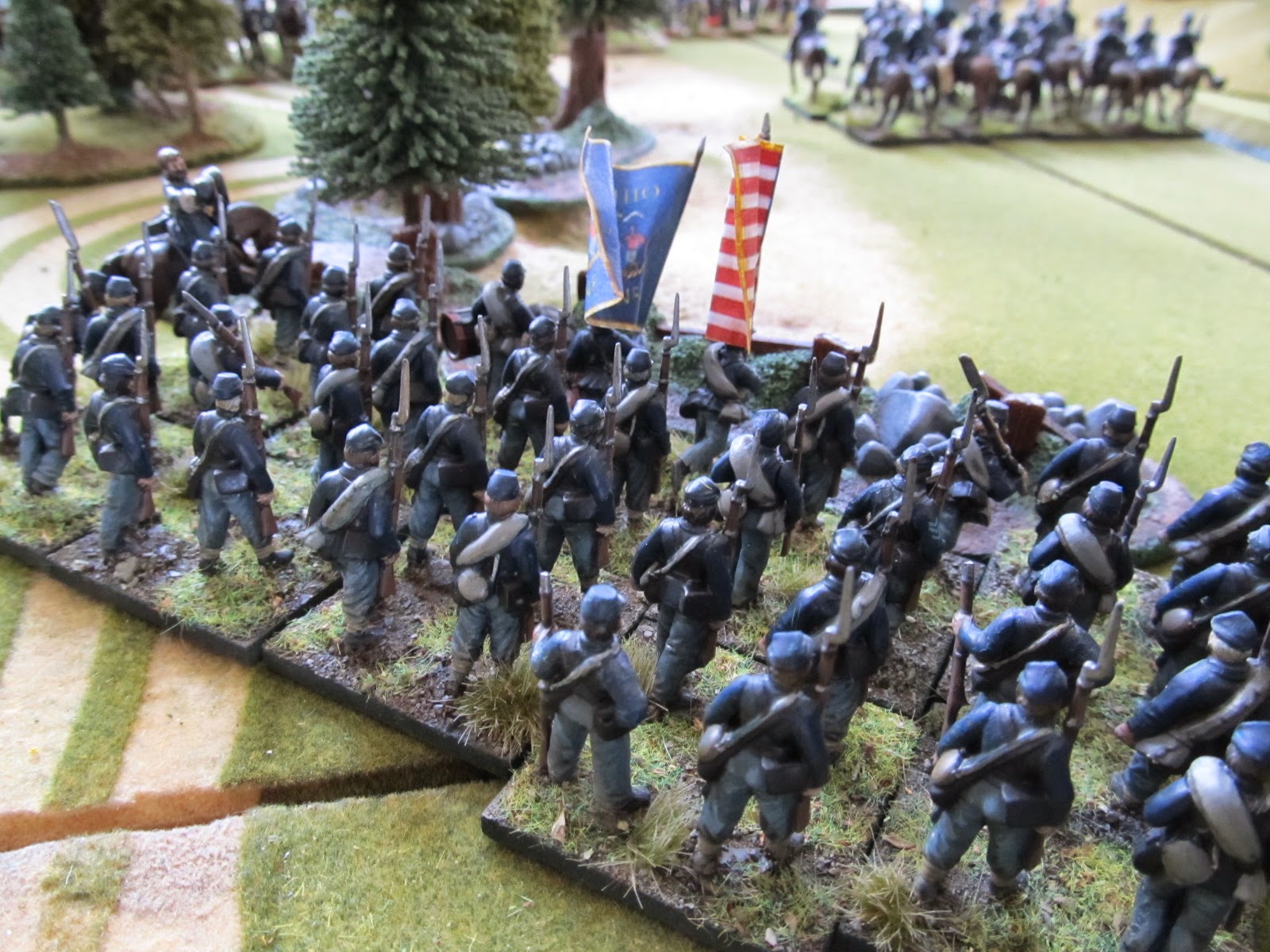 Meanwhile, in McCarthy’s Bridge, my third infantry regiment had arrived and formed up to cover the wrecked bridge. The Rebs were already on high ground across the stream, but out of range, the two regiments began a prolonged stand-off, neither strong enough to risk attacking the other over difficult ground. 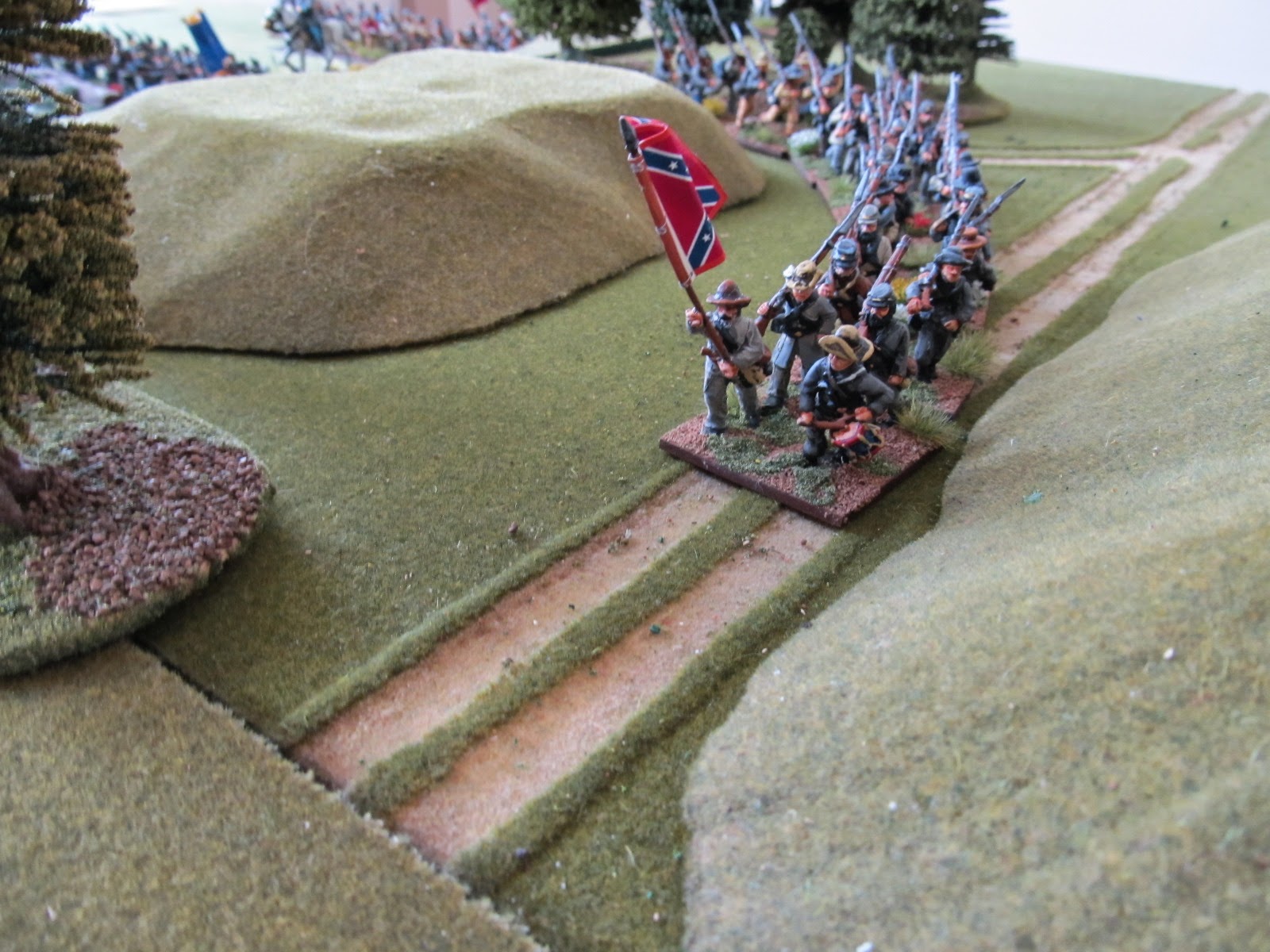 Reb's still on the march towards the bridge 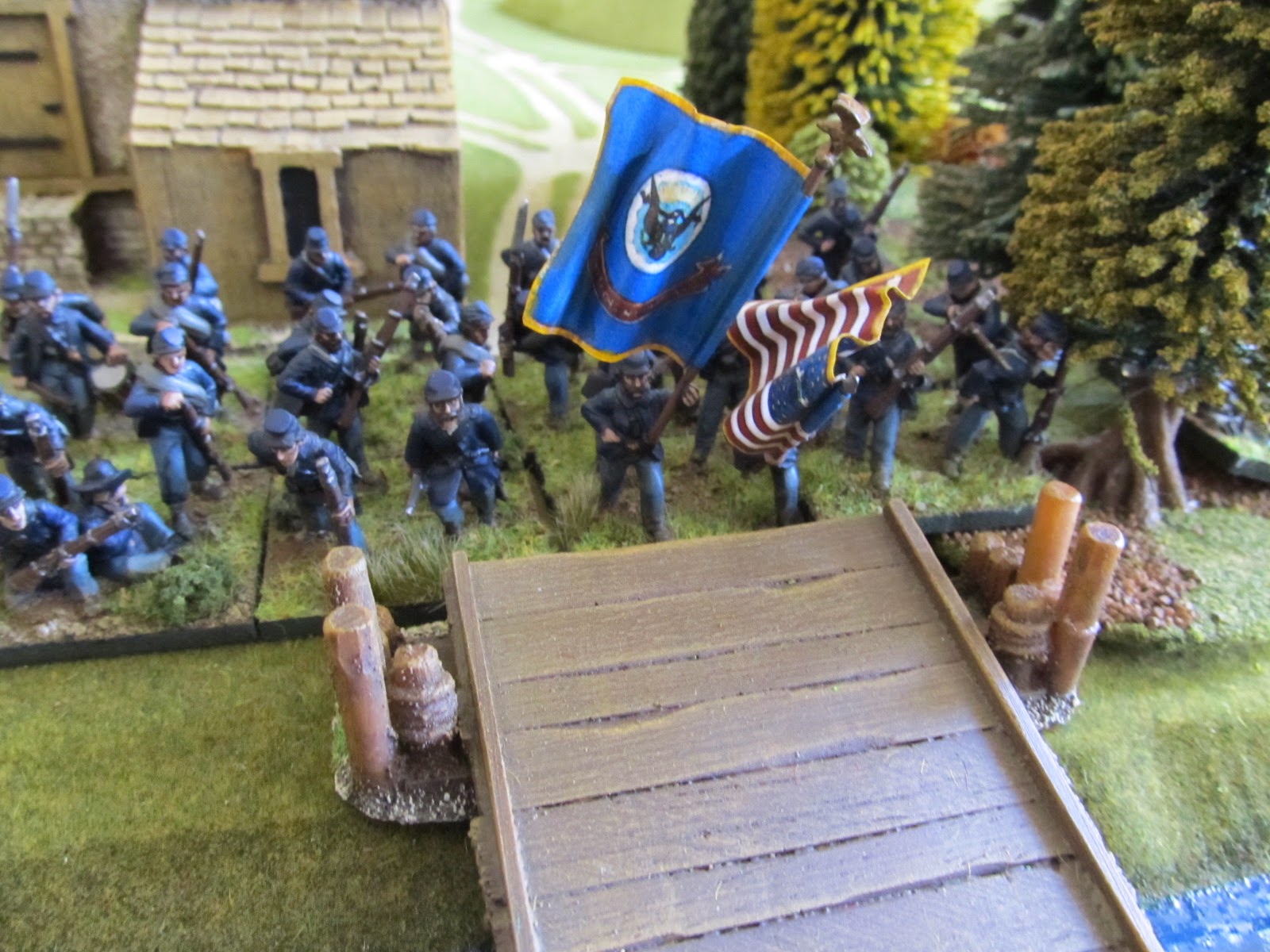 Union troops await them, muskets ready, but it was stand off. 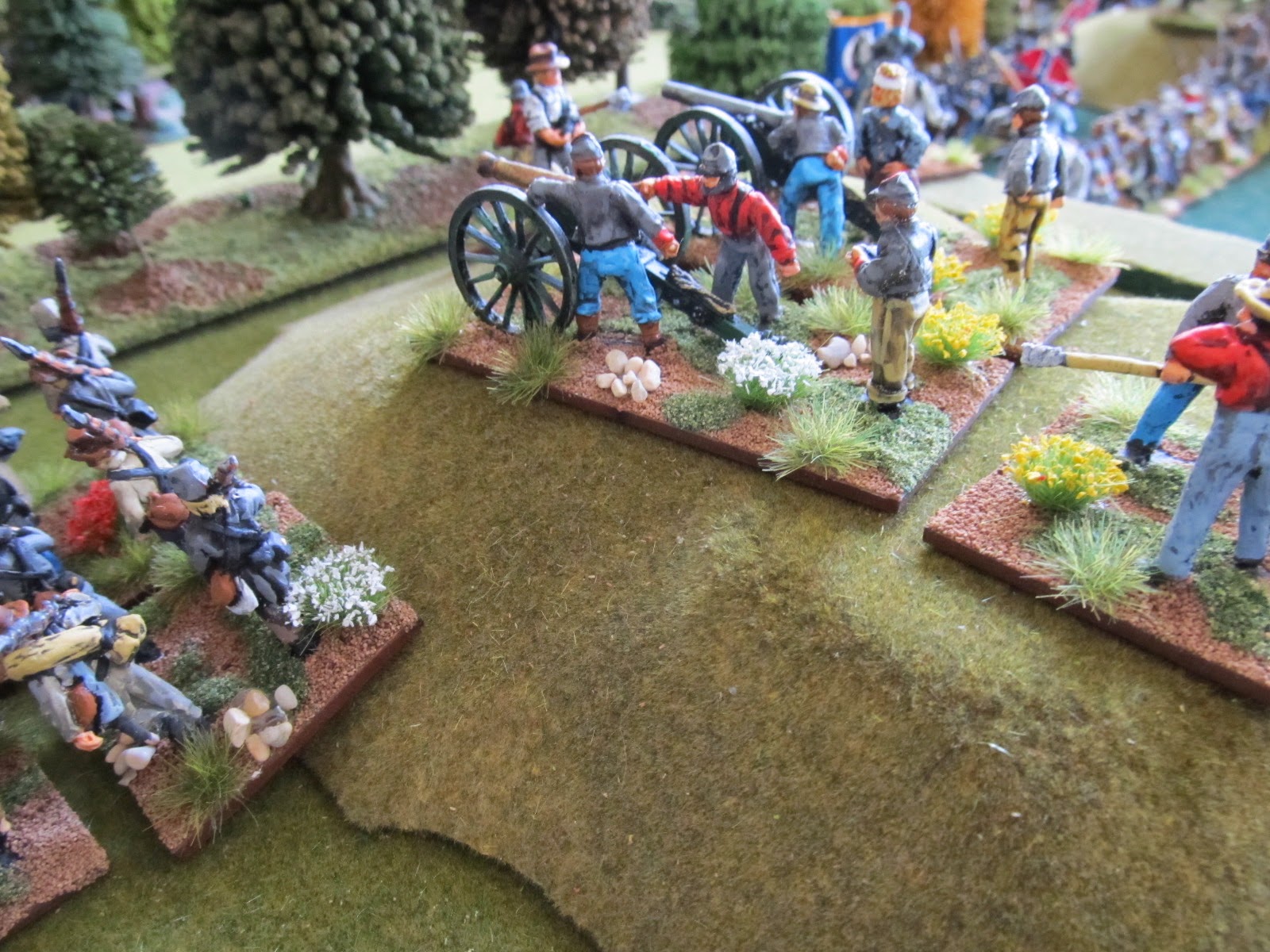 The Reb battery final deploys on a hillock, but gets shot to pieces by the larger Union battery

The Union guns on the hill thundered every turn and caused more losses down by the creek, shot and shell landing thick on the far back, amongst the tree line where the Rebs had finally arrived and formed up. Too late through, the New York Irish and Ohio boys were already in place in long firing lines, and started lashing the trees with volleys. So, obviously out-shot,  brave Jonny Reb charged. Splashing through the stream, screaming Dixie, the sudden bold dash met fire and strong resistance and grey-clad bodies were soon floating in the stream as the Rebs turned tail and ran back into the cover of the woods. The thin blue line had held. 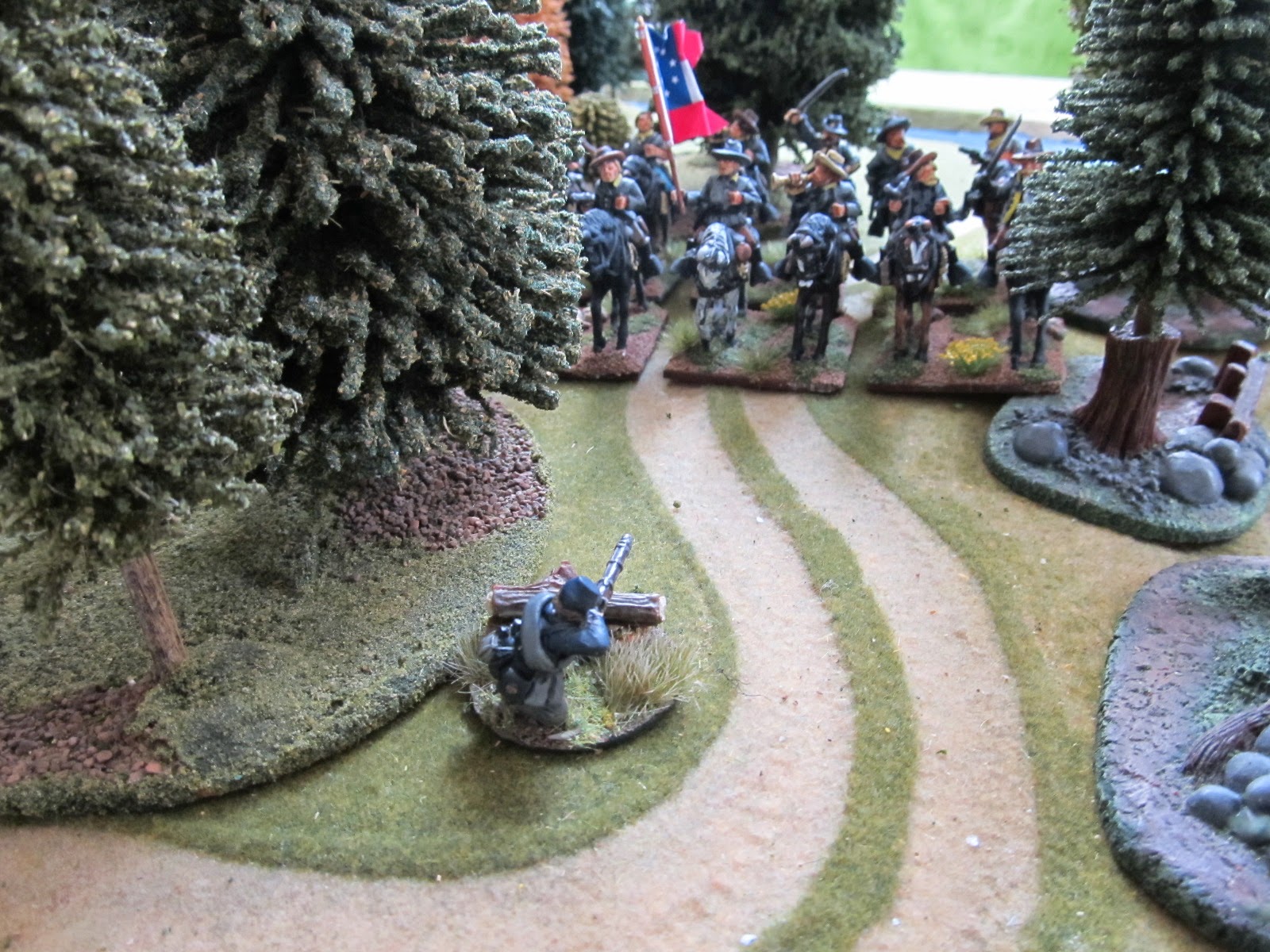 A Sharpshooter gets the enemy cavalry commander, causing delays and confusion. 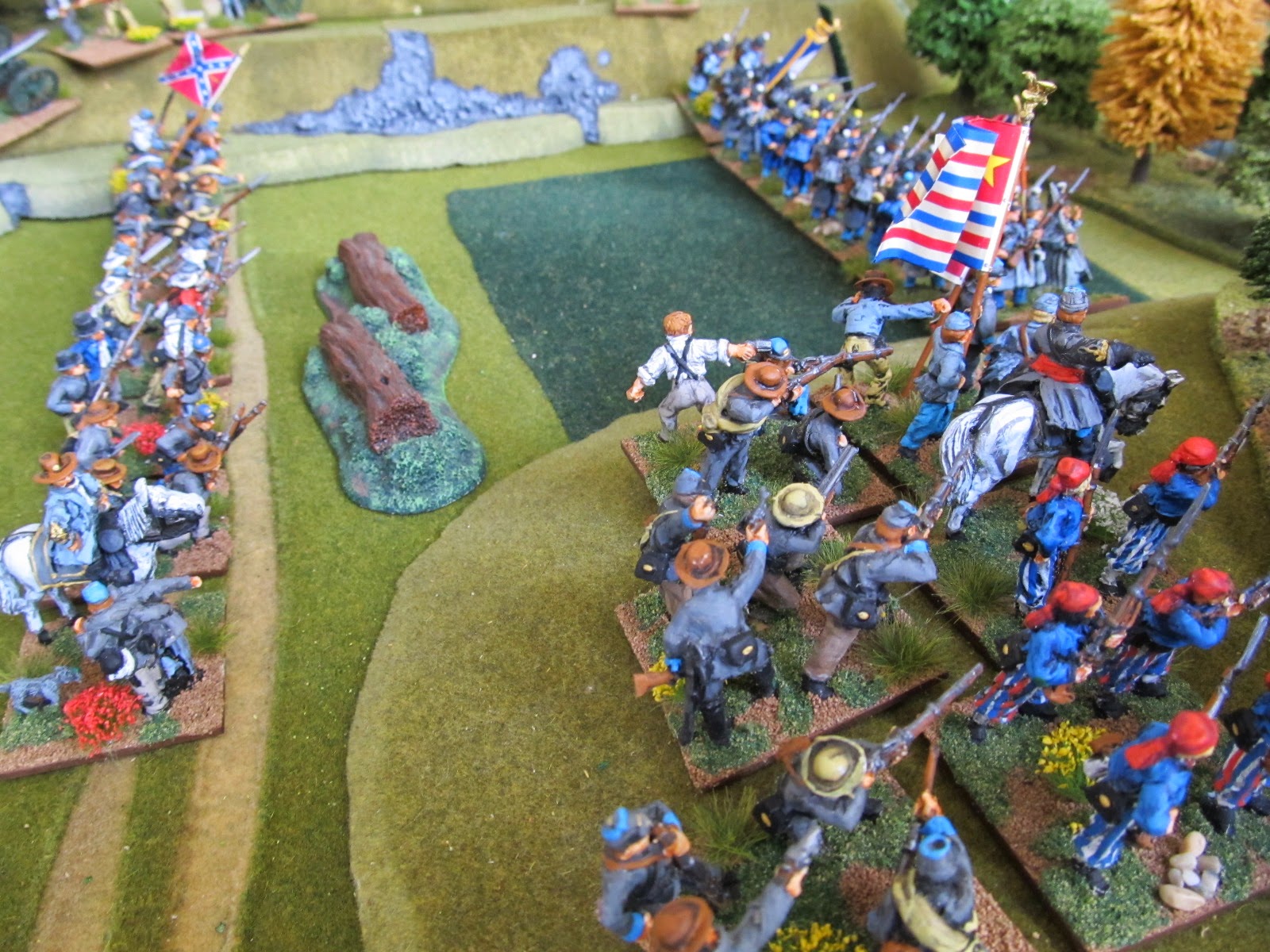 Southern infantry muster for a main attack across the creek 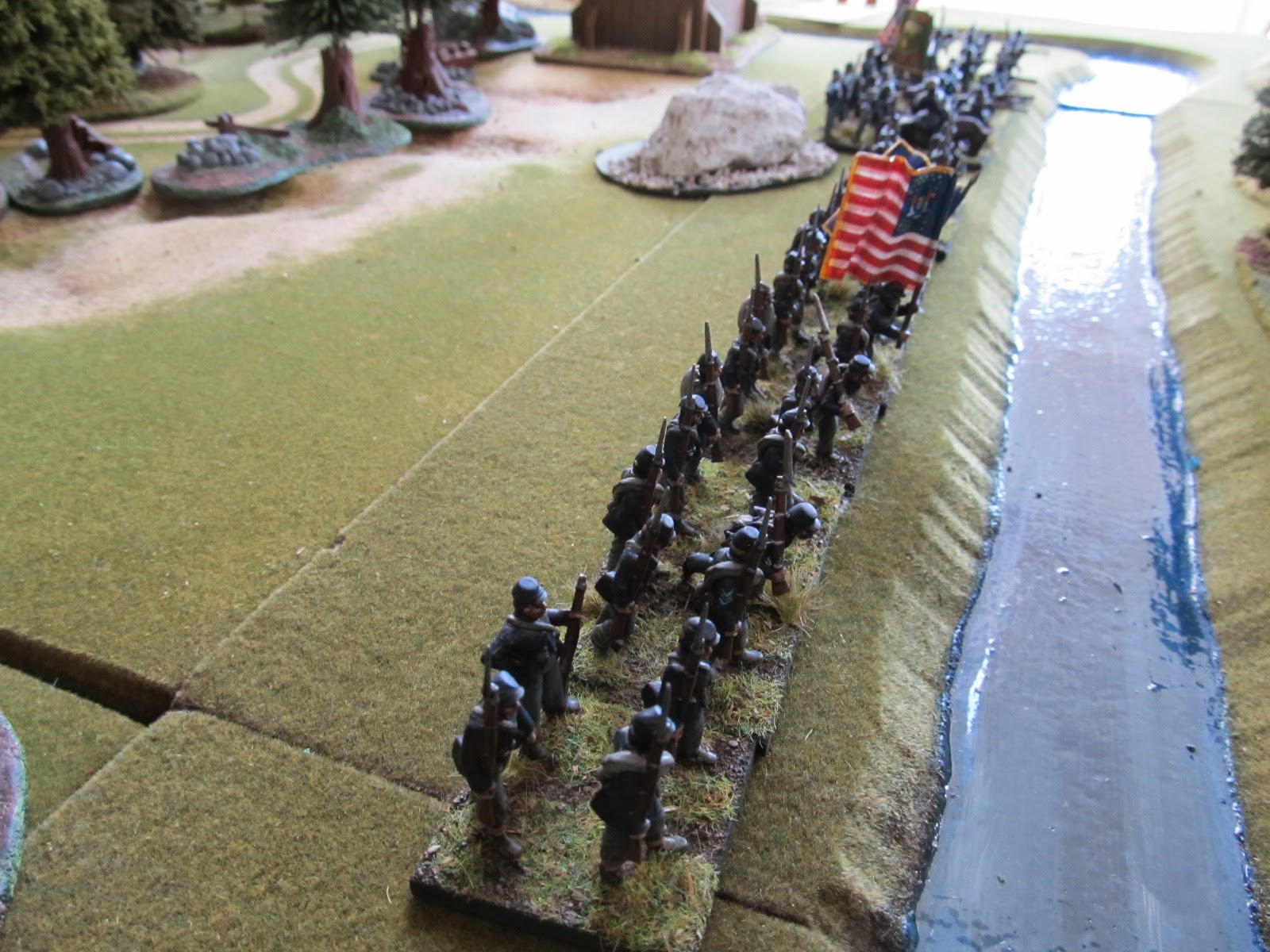 But a thin blue line awaits them. 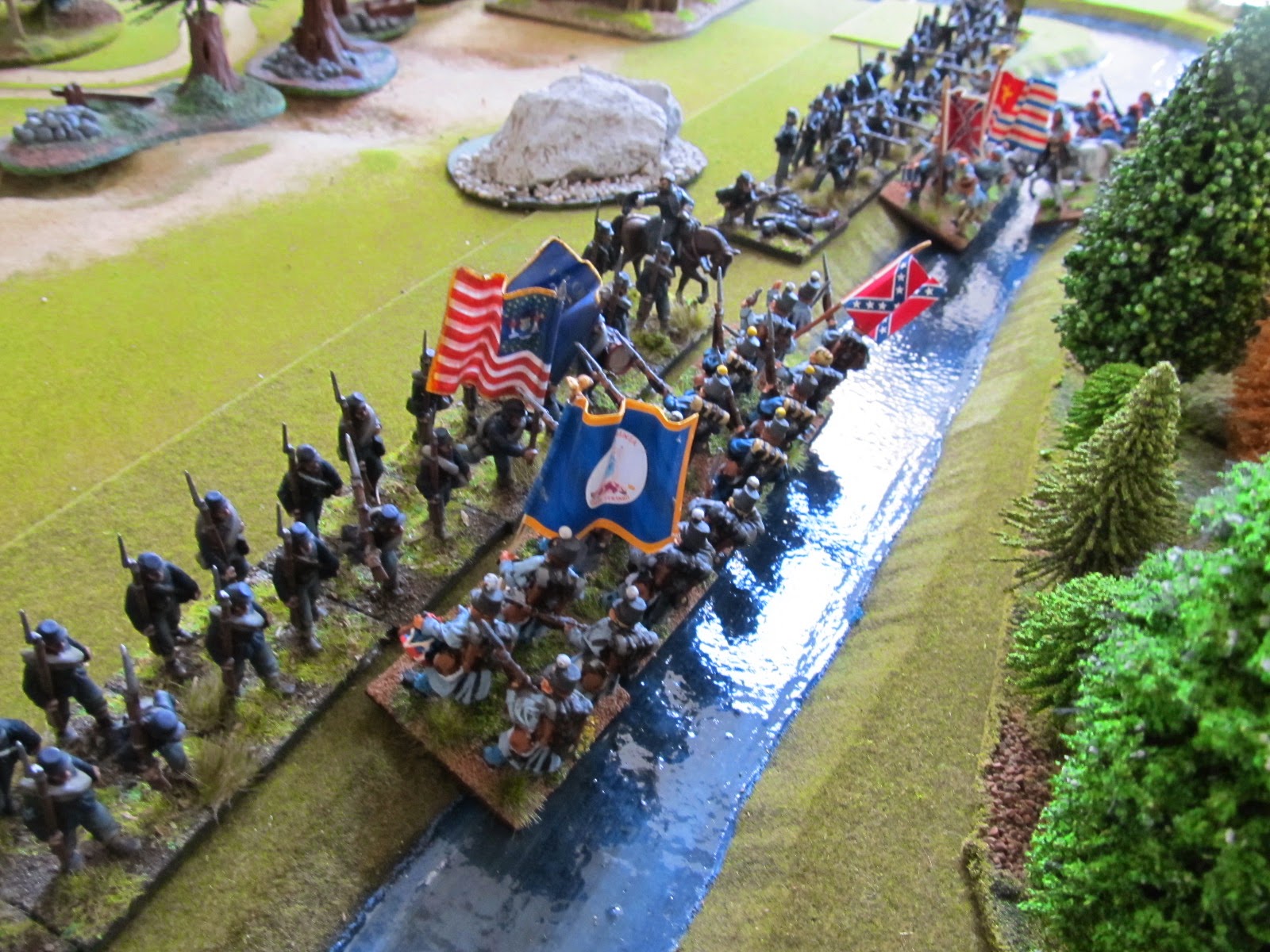 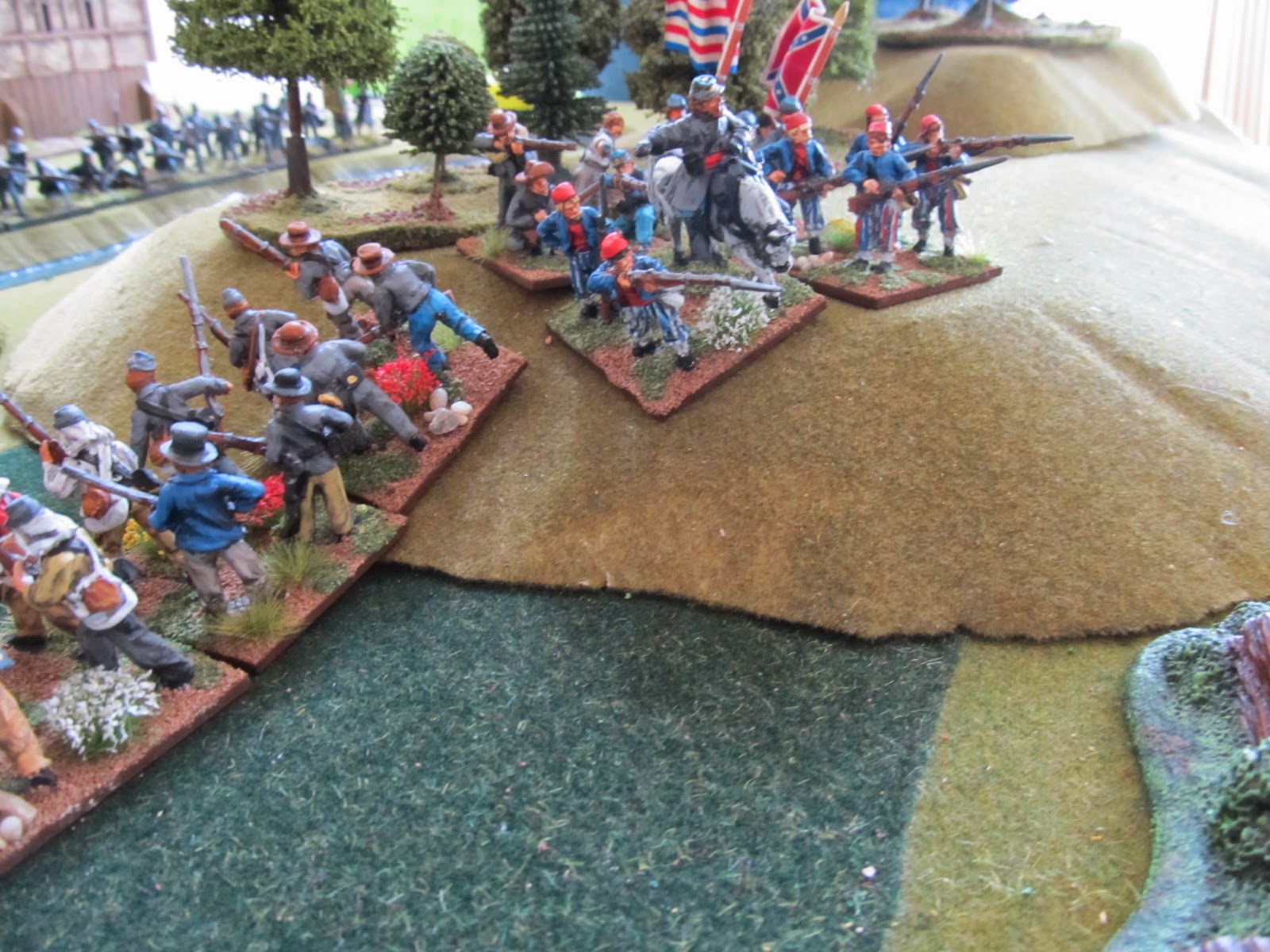 The retreat back over the creek. 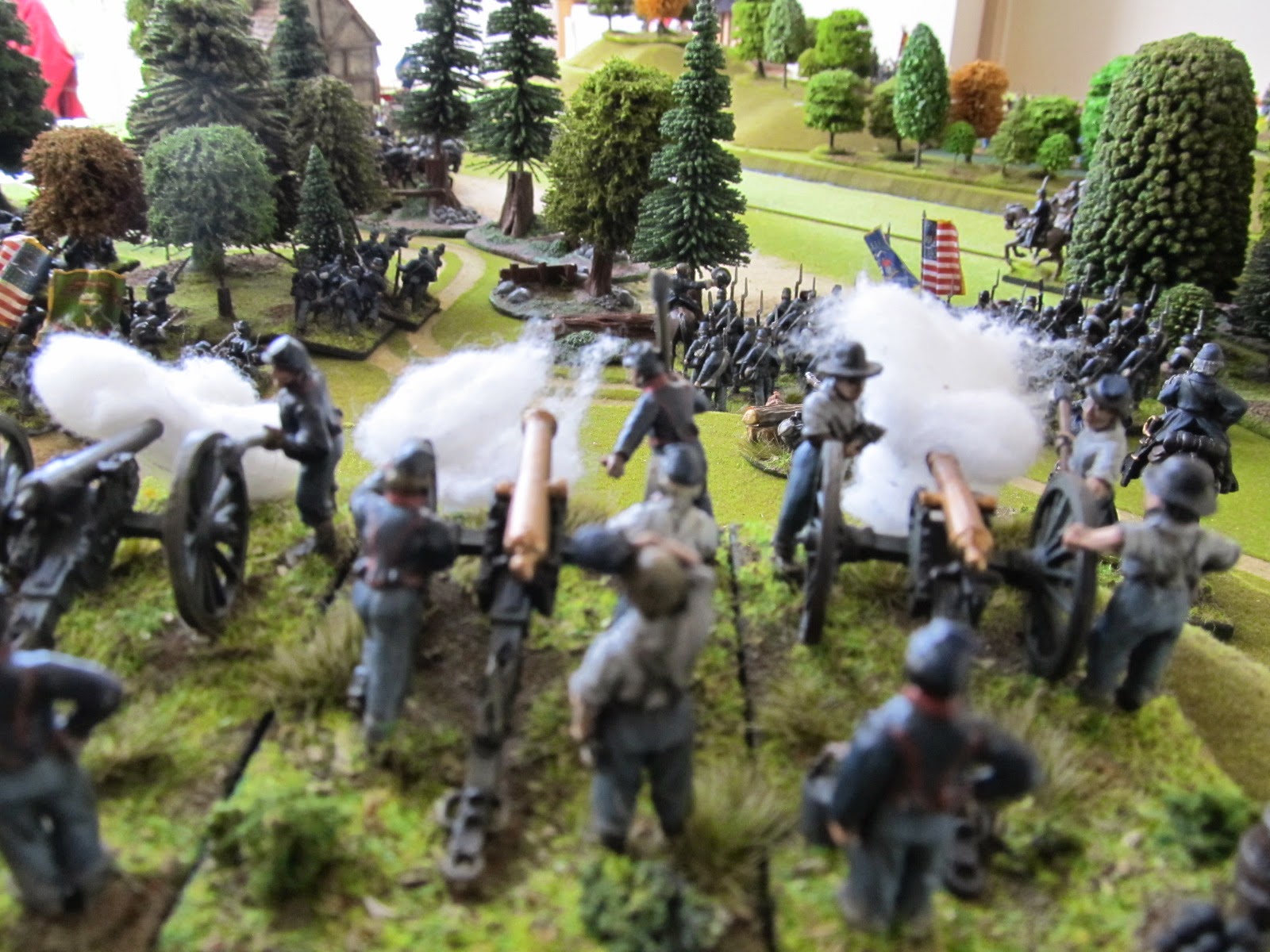 Meanwhile, the Reb cavalry, their initial faltering start behind them, regrouped and tried again, swing out wide right (my left), hoping to get behind the Union and maybe sweep the guns off Cemetery Hill. My cavalry responded and, with some more fast movement cards, raced over to face them down and block their free run into my rear area! A fast moving reserve seemed a far better role for the horsemen than that of shock attack troops, and the game encourages this – we liked! 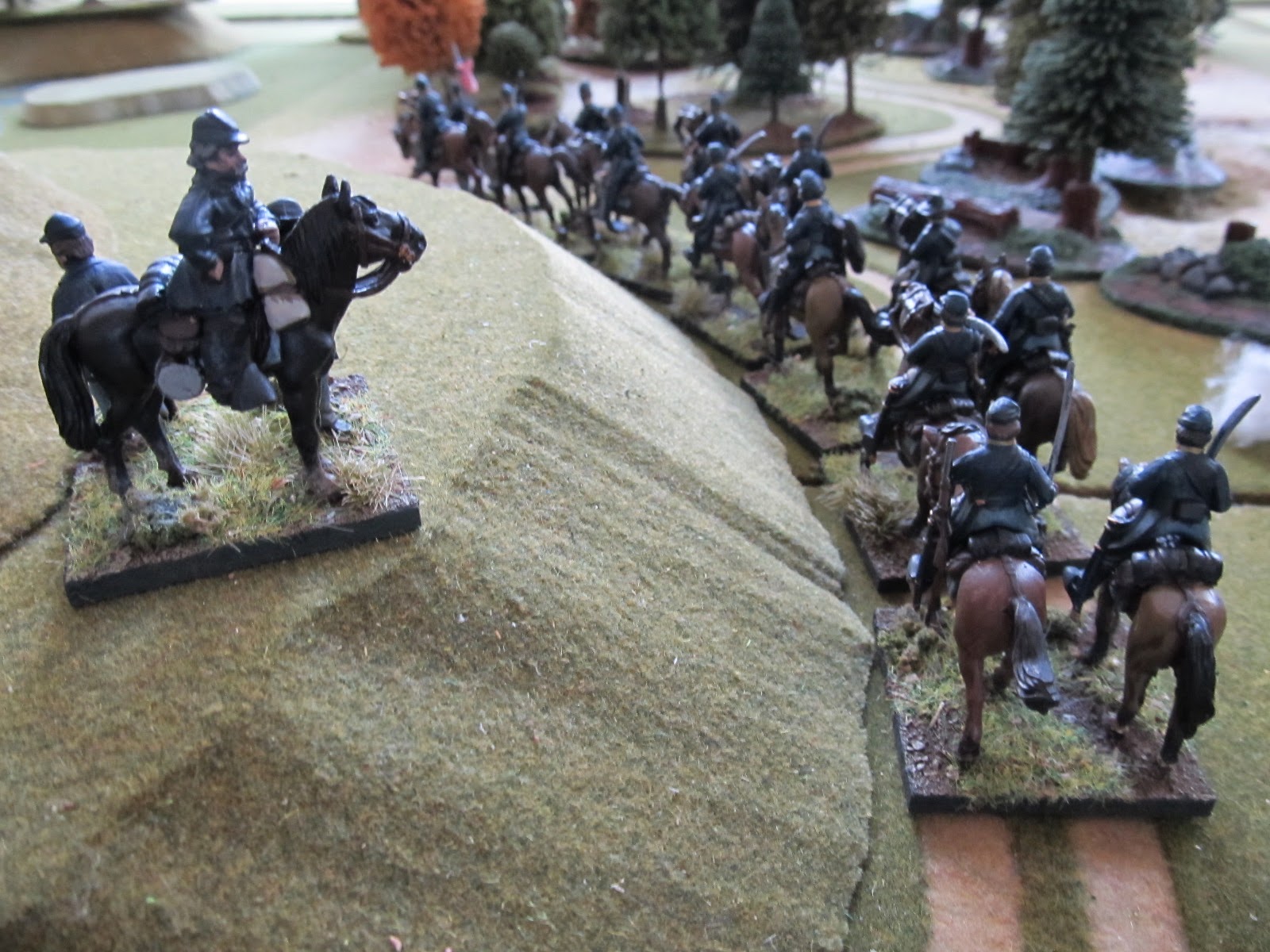 The cavalry redeploy to meet the threat on the left flank, 'Fightin' Billy' watching on. 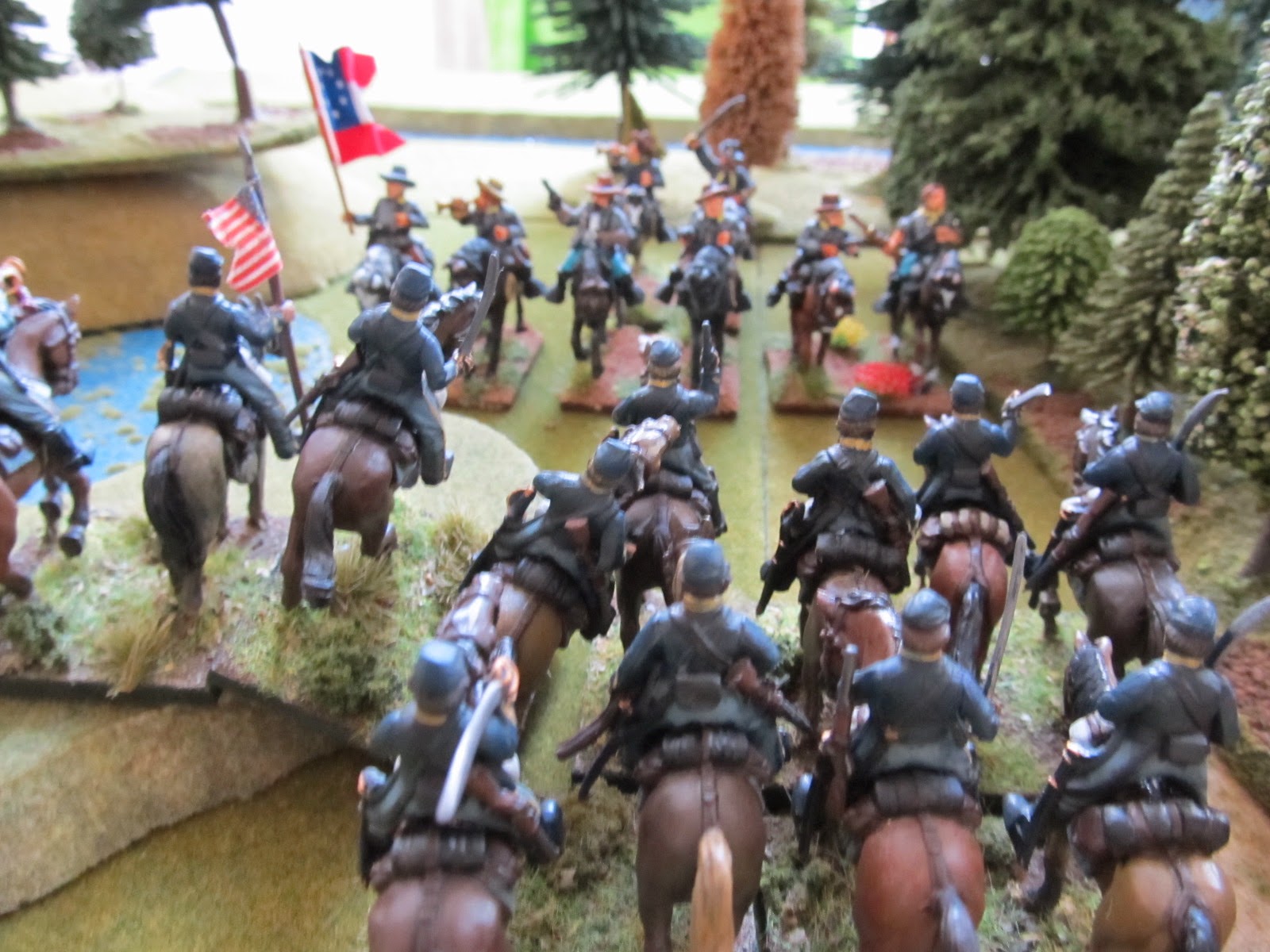 Charge! The cavalry meet in a swirling melee, that eventually the Union won.

Also, the Reb guns had deployed and opened fire, over near McCarthy’s Bridge. This brought the ire of my own guns and a counter-battery bombardment ensued. Several turns later and the Reb guns had been decisively defeated by my larger battery.

It was obvious that the Reb’s were losing the battle, so, in a last desperate attempted to turn the tide, their cavalry charged mine. The following melee lasted for about 5 turns as one side attacked, was thrown back, then counter-charged. It was attritional, but my horsemen just got the upper hand, and slowly the grey cavalry withdrew. Still, the Confederate  shatter point had not been reached, mostly due to some dire dice rolls by me. So, to force an end, my Pennsylvanian boys ended their long stand-off, forded the creek and climbed the far hill to meet the Rebs head on. They exchanged fire, and then the Rebs charged again, driving my recruits back down the hill and over the stream, but their attempts to follow up their win by fording the stream themselves was quickly shot down and they too withdrew, both sides bloodied. The last few stands removed in this clash broke the Rebs, and the bugle calls to retreat rang out. My Yankee brigade had stopped the Reb raid and held the line of Goatwalk Creek. 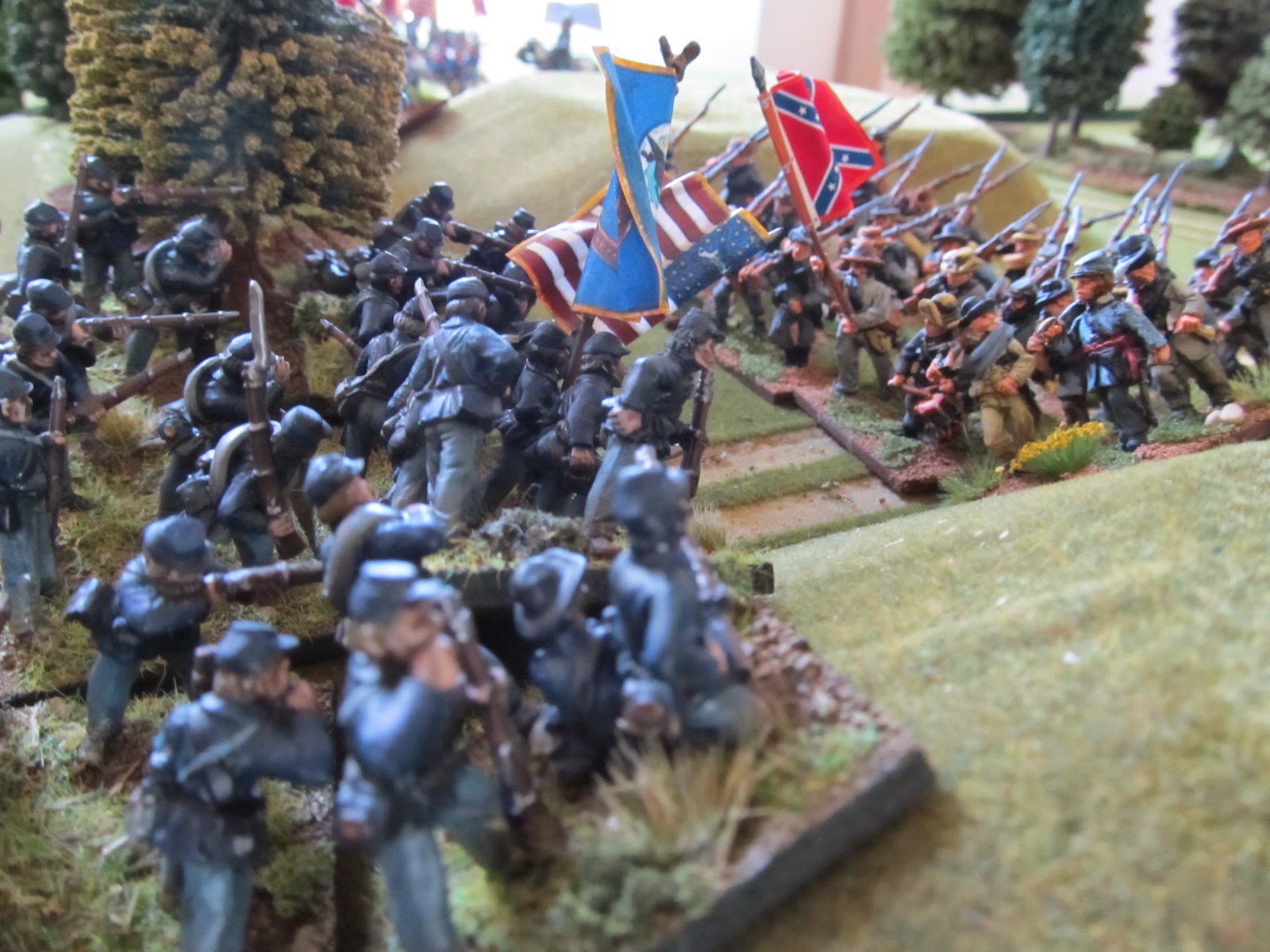 Finally, the Union attack across the bridge, and are repulsed.

The game was excellent, not a dull slugging match as so many line up and fight games are. It had sweeping manoeuvre, ‘hot spots’ as the battle flared in one place then died down, to flare again elsewhere, and we quickly got to grips with the rules. Altogether we enjoyed them, and we will play again. In fact, the campaign begins proper with a game for 1861 in 4 weeks time... which will be great fun and keep us going for months of occasional ACW gaming.

We prepped the campaign by creating our brigades and commanders. Mine, ‘Fightin’ Billy’ Samuals, is a leading abolitionist and has a personal physician with him on campaign. My opponent looks formidable, with powerful friends in the statehouse and a veteran of the Indian Wars, a tough southern cookie, but we’ll whip him back to Richmond.

More boys in blue required first.  Thumbs up for Longstreet... I think Maurice might just be better though.