Game 5 of the Konigsberg campaign,and it was time to drive into the suburbs of Konigsberg itself. The game would be a Urban Assault scenario, fought through the Rathshof suburb, round the Wilhelm-Friedrich Platz, along Lawsker Alle (main road into town from the west) and an area called Schrebergarten on my map, which I think is allotments, well, an area of open(ish) grass/park anyway.

My Russians would be continuing the drive into the city centre, defended by the last remnants of the battered Volksgrenadier and any available extra man that could stand having a rifle shoved into his hands. Having won the previous game the Germans still had their 50 point advantage, so it is 700 points for the Reds, vs 750 points of Germans.

My force is listed below;


The enemy were a Volksgrenadier platoon, an Auxiliary platoon (armed civilians), supported by a Pak-40 in a concrete bunker (under the hotel/casino overlooking the platz), a 20mm Flak truck, a SdKfz 251/22 panzerjager and a unit of veteran assault pioneers mounted in the last moving half-track in Konigsberg, with a recon fusilier patrol dug-in across the Platz, supported by a Goliath demo-team (weird, but desperate times I guess). As Defences, the Germans had some foxholes, a fortified building and the PaK bunker. So, an infantry fight then.

My plan was to use my infantry to lead the attack as a screen, behind their screen the assault pioneer squads would closely follow, hopefully using reserve move and close assault orders to clear buildings by bursting through the bullet-screen very quickly. The ISU-152s would hang back (beware the rooftop Panzerfaust!) and target lynchpin buildings to bring them down. The OT-34, well, he’d be a rude surprise and lead the attack across the allotments, were there were no AT guns deployed. Meanwhile, the hiding scouts would be calling in my mortar fire and hopefully guiding the VVS onto targets too (so they’d have to avoid getting killed early in the battle this time).

Time for the off. After deployment the Germans were occupying 3 objective buildings and had out-scouted me too - 4 counters - ouch, I had 2 objectives (thanks to the scout’s Behind Enemy Lines deployment ability). My BR total jumped to 10 straight away, but I did get a Air Attack chit (which then failed to show).

To start with the Germans dug-in and got onto ambush fire, expecting the Russian onslaught. It didn’t come, I hung back, called in mortar fire and awaited the reserves… more infantry, pioneers and the ISUs. I didn’t want to attack piecemeal. I also withdrew the scouts and FHQ’s jeeps, no point in getting them mortared. Still, the German MGs covering the Platz, (3 MG-34s and a HMG-42 with loader team), began their work, pinning down my leading infantry and platoon HQ in a blaze of bullets, and my sniper got killed. Incoming 105mm artillery hammered my forward buildings and added to the carnage, 2 squads broke (morale rolls failed me this game, the number of 1 and 2s for pinned squads saw me lose at least 5 to routing!). It was one way traffic, as my mortars made little bent on the enemy. Then the ISU-152s rolled in, targeting the HMG teams building, 3 152mm hits scored 2 structure points, it was almost down after the first turns of firing. The MG team was pinned inside too, so doomed to a messy end in the collapse (I thought).

My infantry headed out across the parkland/allotments, with the OT-34 amidst them and hammering away with MGs to keep heads down (and failing). By turn 3 most of my reserves had arrived, including the 2 resupply trucks to re-arm the ISUs (ammo 2!). Then my timed Katyusha strike hit, get in! 12 dice, 6 6s, right in the middle of the Platz, and it was carnage, 3 wiped out German units including the Goliath team (to many boos, they hadn’t had a chance to go-off yet - thankfully). A lot of pinning also, including the PaK-40 in its ‘bunker’, well given the cover saves it made, that bunker was not reinforced concrete… unerringly rolling 1s, jerry build! When another PaK gunner was killed by 120mm mortar shrapnel the jittery crew abandoned the fight - good, the ISUs had free rein over the Platz. Their continued fire into the building hammered it, but in 11 dice I rolled not one 6, still the building stood!

Reeling from the Katyusha pounding the German’s orders failed them, with just 5, the artillery stopped and the hellish MG fire was reduced, my infantry might actually now get moving… a few reinforcements arrived, including the pioneer squad in their half-track, looking to counter-attack just north of the Platz. In the allotments, the Russians kept coming, with little to stop them at the moment. An auxiliary squad tried to engage them with rifle fire and pinned themselves in fear - just can’t get the recruits these days!

Gotterdammerung continued on turn 4, as my PE-2 timed strike dived in and hammered the hotel/casino strongpoint, 3 bomb direct hits later and German senior officer was dead and the auxiliary squad within smashed and pinned (2 men still alive). The incoming ambush fire from the 20mm Flak truck was ineffective and the PE-2 climbed away, job done! The German counter stack had raced up and the picture was glum, already I guesses they were at later 20s, on average chits, and his total was just 36… the punishment was horrific. I was still at just 17 from my 40 total, plenty of breathing room… it was in the bag! Or not…

How luck turns, from a bad start, to great recovery, to a disastrous few turns. My ISUs continued to fail to score the last vital six they needed to bring the building down (unreal the odds on this by now), I lost another infantry squad to MG fire and, the Luftwaffe showed up, a FW-109 buzzing in… the last aircraft over the city. Its accurate bombs smashed my attack in the allotments, destroying a infantry squad with a direct hit (large bomb!) and my OT-34 with another, it pealed away in triumph, and my right flank attack was over, the last few men I pulled back to save the chits.

The Germans now counter-attacked, the pioneers attacking a vulnerable pinned rifle squad north of the Platz, only they failed to spot and the red riflemen were saved from a horrid death-by-flammenwerfer. The pioneer's MG team did score 1 casualty and my riflemen got a ‘Beyond the Call of Duty’ morale roll. 2 spots later and their return fire with rifles and DP LMG destroyed the pioneers and pinned their MG team. So much for that counter attack… 1 pinned enemy squad showing true Russian grit. Notable, the Germans had now stopped unpinning, the game would surely be up soon.

It was my turn to assault, pinning the 3 man rifle team with DP fire, my pioneers then assaulted them. Straight in with 11 attacks, 8 hits scored… and 7 hard cover saves then made! What, 1 man dead!  The return attack killed 2 of my men… grr! The German morale test was… Beyond the Call of Duty… the 2 survivors opened fire and killed 4 more Russians, leaving the last man pinned, so he ran… my veteran assault troops had been wiped out by 3 pinned Volksgrenadiers… err, how? Now I knew how the German pioneers felt. I wouldn’t be the last time either.

To add insult to injury my ISU-152 again failed to bring down that tottering building, now 24 dice rolled and no sixes! The other ISU was pinned by artillery fire last turn, so was useless to me. Then, in the German turn, the FW-190 returned and strafed my 120mm mortars with twin 20mm cannon fire, wiping one out, another chit… and a big one, a 5! I was now just 3 points off breaking… it was all going wrong… more German artillery fire, more pinning… but now I couldn’t unpin either.

This was it, next chit would surely win it one way or the other, and it was my go, having moved some troops out of the line of fire, and managed to pin his Volksgrenadier platoon HQ, and sent my Ravzedka team (elite) to assault them. Throwing grenades they scored 5 hits, and again 4 were saved. 1 man dead and a morale test, and.. again. BtCoD! Hell, the Lieutenant and his men automatically unpinned and opened fire. MP-40s blazing my elite scouts were wiped out (not again!), and that chit was a 4… end of game, Russians broken.

The Germans had somehow survived everything I’d thrown at them. They were on 35 from 36 BR, and had been for 4 turns! I just couldn’t force a single chit on them… everything deserted me in the end, dice, chits, hope!. Oh the frustration, but oh the fun!

Another defeat, and one snatched from what looked like a solid win. My men pulled back and regrouped to try again in the afternoon. More artillery support needed I think (and bigger guns).

It was an ace game, close, so, so close, and with twists and turns and odd events. 3 times assaults had been countered by good morale tests, and the Luftwaffe had shown up on a 6 (scenario has Russian air superiority, so a 6 was needed). That awesome Katyusha hit will be remembered for long time…6 direct hits - take that Adolf!!

Here are some shots of the game in action. The campaign is a Russian disaster, the Germans now lead 8-3 in VPs, with 2 games to play, I’ll need 2 big wins to save the day. Next time, the SS police units in Konigsberg try to make their escape in a nighttime Breakout scenario… the cowards! 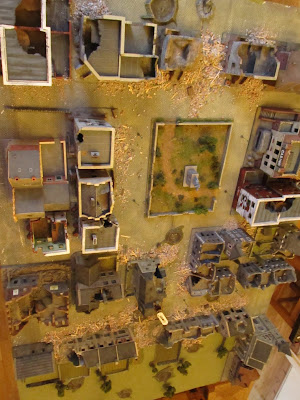 Aerial recon of the Platz, and the far end is the schrebergarten and the church. Russians attacking from the left. 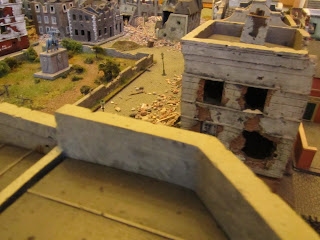 Russian view from the rooftop over the Platz. 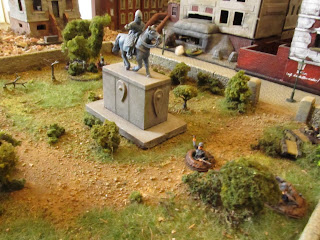 Fusilier squad in foxhiles across the gardens.
That statue is the target point for a timed Katyusha strike. 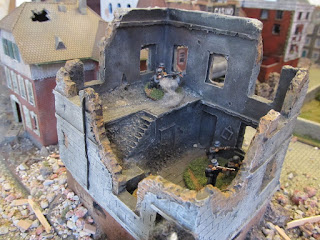 Volksgrenadiers holding a apartment block north f the Platz, I could not shift them, now many failed pinning attempts?? About 9 or 10... good grief!! 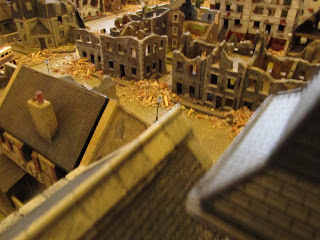 German view from the church tower across Lawsker Allee. 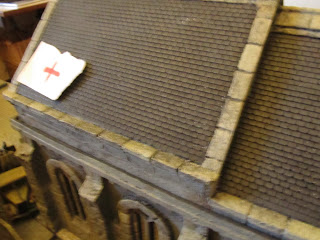 The church is designated a field hospital and no go for any troops. I did mortar it slightly, by accident... such is war on the Eastern Front. 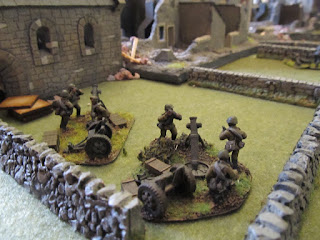 The men responsible, my 120mm battery in the allotments. 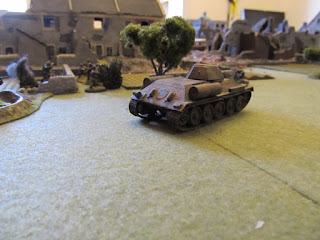 OT-34 heads across the allotments with the infantry platoon. 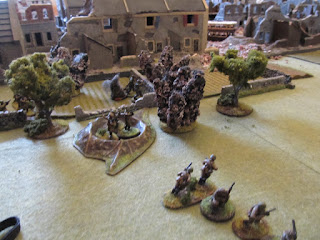 ...and draw artillery fire, which failed to do much to slow them down. 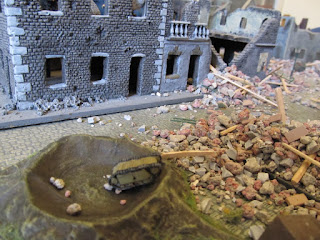 The sneaky Goliath negotiates a crater on its way its target, the objective buildings currently held by my infiltrating scouts. 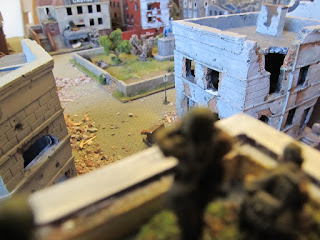 FHQ watches the battle for the Platz unfold, and directs in my 120mm mortar fire. In the distant the hotel/casino and its PaK bunker. 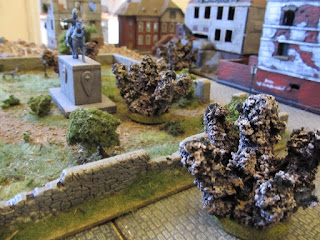 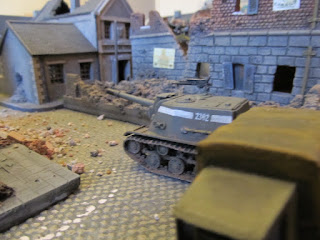 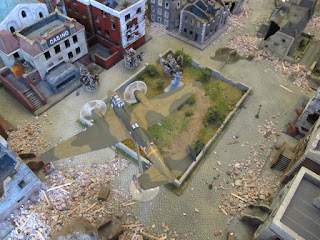 'Peggy' drops in to bomb the hotel, another big hitter, seeing the German FHQ blown to bits by a direct hit through the roof. 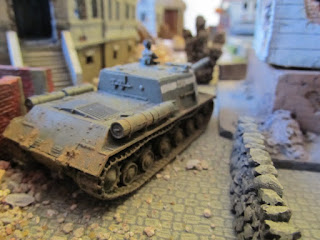 Second ISU-152 moves up to engage buildings across the Platz. 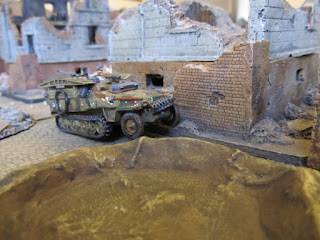 Counter-attacking pioneers roll in to hold a key building north of the Platz. 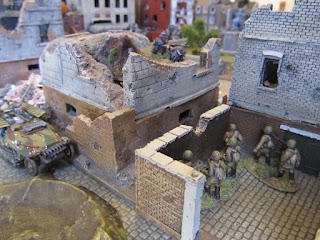 ...and lose the close assault and firefight with a rifle squad... oops! 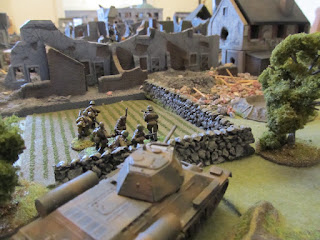 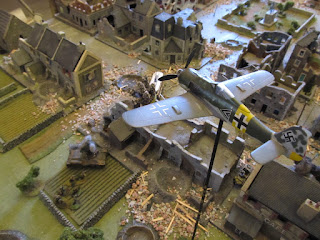 the last of the Luftwaffe, a fluky FW-190 buzzes the allotments and bombs my attackers. 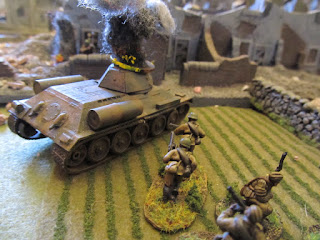 OT-34 direct hit - dead, rifle squads blasted and pinned too. That attack is over. 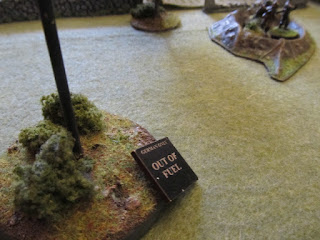 An oddity, special out of fuel played on the FW-190, so only 1 turn more of strafing before he needs to head home. It didn't matter anyway, but was characterful event and would have saved me from 1 strafing run at least.