An early play-test game for the ‘in development’ Soldiers of Napoleon rules… Napoleonics! Which is back to where it all started for me, my first wargames with models and dice and Charles S Grant rules were Napoleonics, with plastic Airfix men. I think we do a do a bit better these days.

In this Peninsula battle I took control of the Anglo-Allied forces, with 3 brigades. On the the right, the Portuguese infantry, behind earthworks as I chose a defensive deployment, 4 battalions and battery of 6 pdr guns. The centre, on the hill and either side of the big rock, was a British infantry brigade, 4 battalions and a battery of 9 pdr guns. My right, a light cavalry brigade of light dragoons and hussar with a horse battery of 6 pdr guns. I had a reserve brigade, off-table, ready to move up, of a heavy dragoon regiment. They would arrive on my left from turn 2.

Facing them, Le French!. On his right, a weak provisional infantry brigade of various un-enthusiastic German and Swiss battalions and an artillery battery. In the centre, a French infantry brigade with an artillery battery and attached small regiment of dragoons. His left was a light cavalry brigade, hussars and chasseurs with their horse battery. His reserve brigade was 2 grenadier battalions, marching up in the centre to reinforce his main attack on the British-held hill. They were slow though, only arriving until turn 5, so didn’t play any part of the battle.

The rules, card-driven as per other ‘Soldiers of’ sets, but with a lot of major changes, are in early testing. But the ideas are working, even if it taking a lot of tweaking to get the balances right.

In this game, which lasted 4 hours not including the lunch break, the French main attack was straight up the middle, columns coming on in the same old way. My red-coated lines facing them. He would have small supporting attacks on the left and right, but the centre was his biggest brigade and the best, they either took Colinas de Las Rocas and won, or failed and lost. My plan was to hold, then counter with a left hook by cavalry into his centre. The line must hold long enough for the cavalry to come to the rescue, and break his attacks momentum either with charges or forcing him into squares.

It did not turn out so… his main attack was heavy and despite my cannon fire and excellent skirmishing musketry, his veteran infantry broke through and pushed up the hill. When my light dragoons tried to swing right to aid, they were counter-charged by his small dragoon regiment, which, aided by good special cards and better dice, routed by light cavalry who fled along with their horse battery. The arrival of my heavy dragoons sent his dragoons running, but then artillery pounded my heavies and skirmish fire from the provincial battalions light companies, lurking in the cornfields raked them. They lost men and time rallying from the Disorder… and so their attack lacked any impetus. Meanwhile, the French columns had won the centre, breaking my Scottish and Irish battalions and then the Nottinghamshire lads as well… that was the battle. My Portuguese had contributed, erm, some cannon fire? … and his light cavalry had done, nothing, not moved a single inch. We'll look at that, doesn’t seem quiet right… but a good start, and here are some quick snaps of the action. A fun afternoon's gaming… but much work to do. 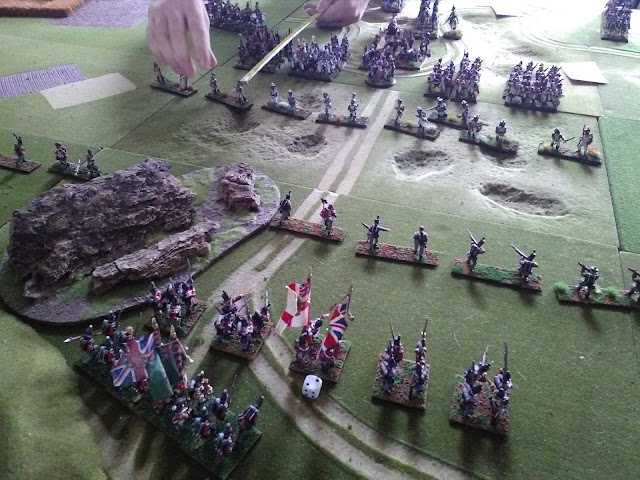 Skirmishers out, the two centres facing-off about to start the bloody business of the day... British skirmish line reinforced by rifles, of course. 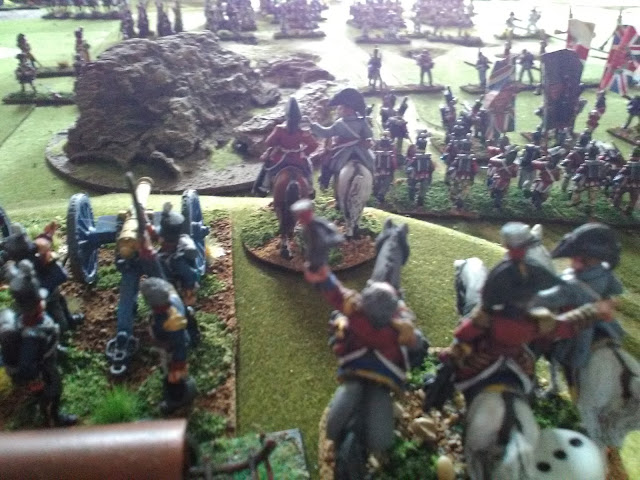 Watched on by my commanders from the hill and their 9 pdr battery making the French pay for their boldness. 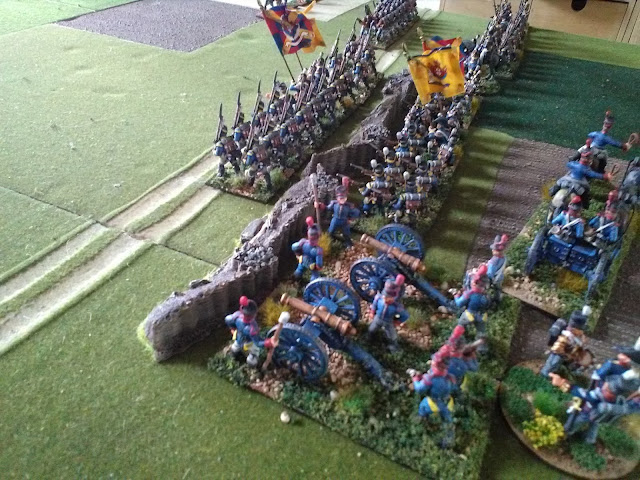 Portuguese brigade on the left, second line secure behind the earthworks. 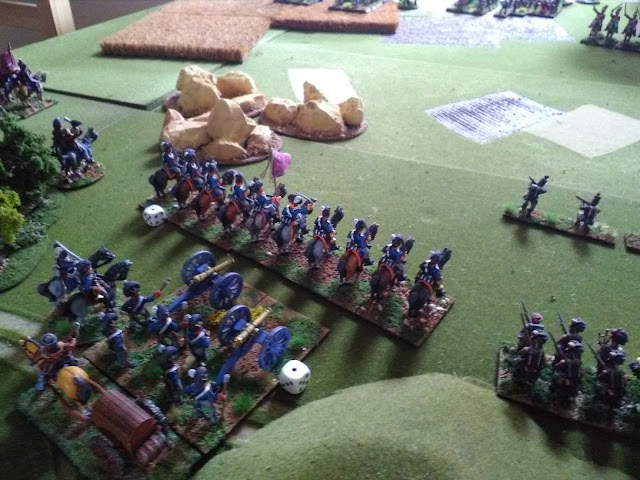 My light dragoons move up on my left to swing in, only to meet very determined French dragoons coming the other way. Dice show the amount of disruption on a unit. 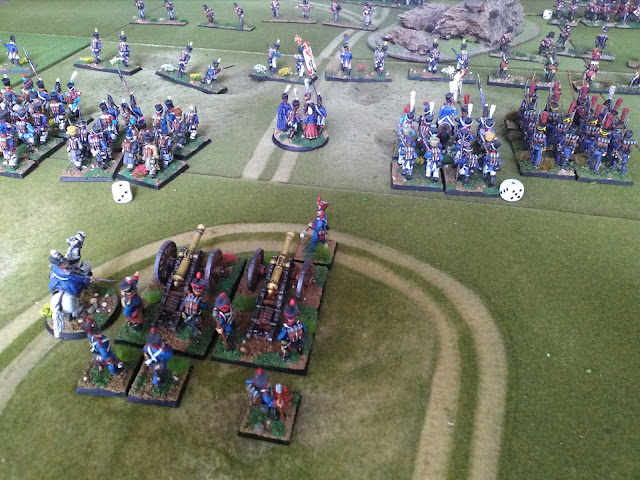 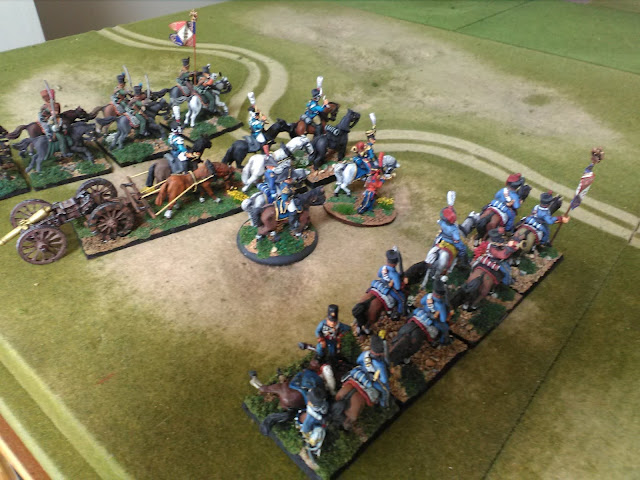 French light cavalry, having the day-off as bystanders. 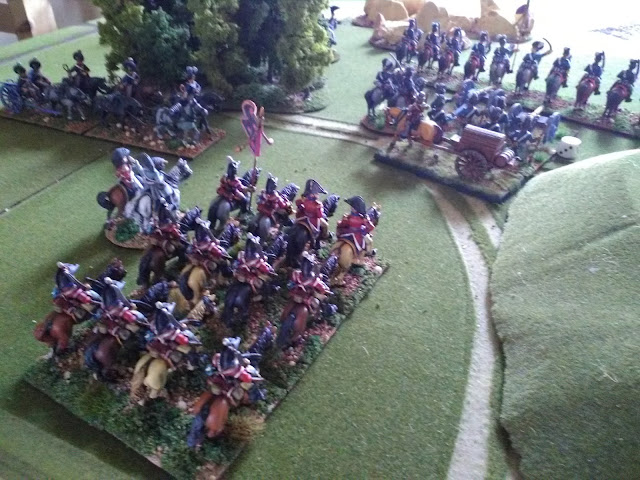 My heavy dragoons ride in on the left. Their impact was - not so much... certainly not decisive as I hoped.