From the Wilds of Caledonia

This is just a quick post as a big thank you to the Edinburgh wargames club, in particular Dave Imrie and Jack Glanville, as my hosts for a visit over this weekend. I was up in the wild north for a photo-shoot for the forth-coming, one-day, soon, ish - I promise, 'Soldiers of Rome'.

The follow-up to Soldiers of God, it'll deal with Rome vs the Barbarians... and they were kind enough to allow me to come up and photograph their model collects for the book. We also had a game, got to really, and it provided both players with a first look at the new cards, special rules, etc. Dave took the place of Caesar and led his Romans (and allies) into a pitched battle against Jack's hairy Gallic tribesmen.

In a ferocious battle, with both players going for aggressive all-out attacks (Romans up the centre, Gauls hitting hardest on their right), it was a short and brutal bloodbath (no subtle here, just charge and get stuck-in)... Caesar veteran legions mincing the Gallic centre and capturing their chieftain, Bagotrix, in about 3 turns of impressively efficient death-dealing from Rome's finest. With pilum and gladius they wiped out the Gallic centre, nobles and all, and held both flanks long enough with auxiliaries and mercenary cavalry to crush the Gaul's morale and send them fleeing for the hills... thus was an Empire built!

My Romans have never dispatched the enemy so rapidly or so bloodlessly... the Gauls did have some bad turns of combat (especially with their noble warriors), and Dave passed a lot of Resolve tests...the Romans were very determined to win today!

Anyway, it was a good weekend, lots of photos taken (and curry eaten)... I've worked on the first picture as a taster...

Caesar preparing to meet the Gauls... 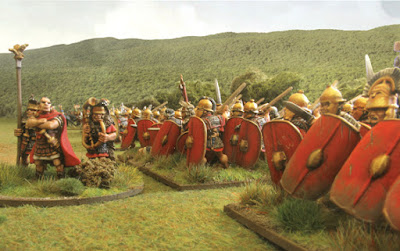 I'm sure many of you know it, but for some beautiful eye-candy of some of the best painted armies around, check-out Dave's blog - Saxon Dog, saxondog.blogspot.com