Another Battlegroup Torch tester game, and a chance to get an outing for some of my latest US additions… this time verses the Italian armour of the Centauro division, during a push into/around El Guettar (southern Tunisia).

It was 750 point Platoon-game, using the randomly generated ‘Flanking Attack’ scenario, so scouts would play a bigger role (drat - I only had 2, both MMG armed Jeeps).


The enemy, well they had a truck/bus mounted Bersagleiri platoon, 4 Semoventas, a single M14 tank, off-table 105mm artillery, some CV-33s of various types and scouts, 5 of them, Bersagleiri on motorcycles, an armoured car, a sniper and, err… an Autosaharana 20mm-armed truck. They won the roll-off for table edges and chose to be playing along the wider table edges, using both corners.

Having placed 4 objectives (The centre (marked by a palm tree) of the table, the town mosque, and both outlying farms compounds), noted down timed strikes (only his Ju-87) and PRTPs, ammo’d up the tanks, it was time for the off, Italians first due to well out-scouting me.

My quick plan, given the table and my tank-heavy force was not to fight a street battle in the edge of El Guettar, my infantry was auxiliary and not up to it (not allowed to close assault). Instead it would be a tank attack around the town across the open scrub. I’d screen-off the town with some infantry (and a single supporting M3 Lee), whilst the tanks and the other infantry motored around town and tried to seize the other three objectives. He could have the mosque. My recce started in the compound with the mission of deploying those MMGs and just holding it until some relief arrived.

His plan (from our post-battle brew and discussion), was to quickly attack mostly in town, using all that recce, and form a defensive line outside of town, interesting, we’d both come to different conclusions. He wasn’t going to be very aggressive in the tank fight, but let me come and try and hold the line once formed with lots of suppressing fire and artillery.

The game started with the Italians shelling the edge of El Guettar to not much effect as I avoided his PRTP, and got my infantry heavy weapons deployed out front, MMGs and 60mm mortar (then lost to an artillery hit). The screen was soon in place, M3 and a second armoured infantry squad to back them up, enough to hold against his lighter scouts. His armoured car was on a little, worrying, flanking move when a breakdown chit saw in conk-out… good luck for me, as the 20mm worried my halftracks, which I wanted to use for their pintle firepower.The rest of the Italians started to arrive in good numbers and moved up to take an objective in the farm compound. My M3 Lees led the way forwards firing 75mm HE for suppression at long range and then claiming the centre of the table objective. As yet, not much damage to either side from the first sparring.

The reserves continued to roll in, my self-propelled artillery arrived (and vital supply truck), and started to fire harassing barrages across at his table edge, some pinning, no direct hits yet. I did pull an Air Attack chit (hurrah!), when unpinning myself and next turn in swept mu P-38, to unload its bombs, very wild, all into the desert hitting nothing (very USAAF)! He’d be back to strafe next turn, but then got pinned by incoming 20mm cannon fire… not a good day.

Italian artillery fire switched off the PRTP to target my massing tanks, but again to little effect (1 pin I think) and the CV-35(lf) came racing towards my isolated recce troops (on ambush fire holding the farm). Err..  ot-oh… .30 cal bullets weren’t likely to stop it. My Lees tried to hit the little critter but no… it was in range and lit-up one MMG team in an inferno. That thing would take this farm if I didn’t do something. What I did was jump in the jeeps and pullback… it took the objective, but hey, better that than lose the squads and jeeps too… Crazy Guiseppe’s lone dash was on a roll… until a HE shell pinned him, good…

The fight in town was also underway, my Lee scoring repeated pins with 75mmm shells, and then the MMG teams hitting them with aimed fire, which broke both Bersaglieri scout squads and left the mosque vulnerable. I decided to change plan and try and take it, but first the Autosaharana truck with its 20mm had to be dealt with, an M3 half track weaved through the narrow streets to get a shot, and its .50 cal MG blew the truck to bits… in town the Italians were crumbling… a sniper and an LMG team was all that was left. In response the bus full of Bersagleiri (the 12.30 to El Guetarr) raced into town over the bridge and soon the mosque was secured again, my planned counter attack ended there, window of opportunity closed.

But now Detroit had arrived, 6 Shermans were rolling across the desert, I’d lost 1 M3 Lee to a 47mm anti-tank gun hit, and an artillery strike destroyed a Sherman, but my armour rolled on, moving and firing. Pins built, my artillery hit and destroyed his AT gun and loader team and its tow, and a Sherman moved up and destroyed Crazy Guiseppe’s flamethrower tank… the US armour looked pretty impressive, and the Semoventas return fire did a few pins but no damage. With my artillery landing ahead of the attack, my aircraft circled around and strafing again (missing - useless flyboy), the last of armoured infantry moved up behind the tanks (they’d need some infantry support to get the far farm compound). My recce raced back into their farm and re-took the objectives… good job, now safe from being turned into toast.

We’d been going for 2 hours so stopped for bacon butties, tea and a chat. 30 minute recess complete, it was back to it…

It didn’t start well, I lost a second Sherman to an artillery direct hit and then another to a minestrike (my strike, I rolled 1 and got it back!), but the returning tank fire destroyed his M14 tank, pinned the artillery observer, blew up his staff car and that broke the Italians… they hadn’t been up for the fight today, a disconcerting number of 4s had been pulled, breaking their BR at 52… after about 3 hours of battle. My BR was at 39 from 49, but the US armour had achieved it daily objective and captured this part of El Guettar.


All went well, I like the early US armour, Shermans are tough, the Italians didn’t like them much. The infantry is very poor though, with a tendency to just become pinned, don’t rely on them for much, fight with the tanks, infantry in a secondary supporting role.

Great day’s gaming, as ever. A few quick snaps of the battle as it progressed. 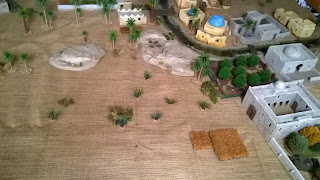 The battlefield from the US table edge 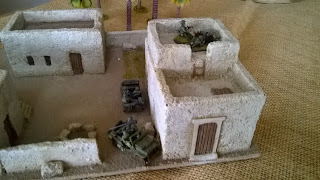 US recce occupy the farm objective 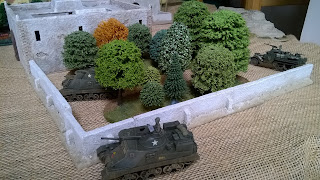 First tanks move around the edge of town 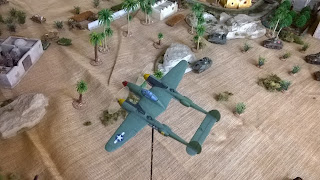 P-38 comes around for another strafing run 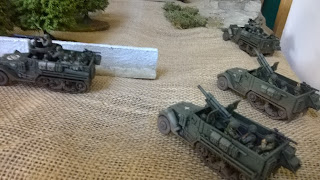 T19 give fire support, soon to be joined by a supply truck 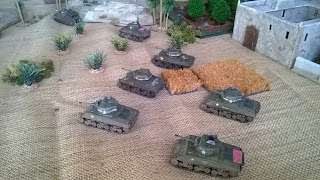 US combat power, Shermans... nice to have the better tanks for once 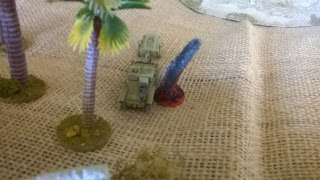 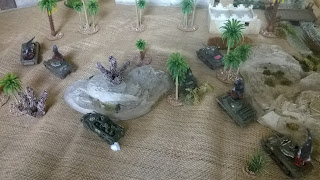 US armour pushing on through incoming artillery fire.

WW2 is my main gaming period, and it could keep you busy for a lifetime I think, but I have a weakness for sci-fi gaming (and movies and books etc). As yet I haven't found the sci-fi game I really want to play, and in the past that's resulted in just writing my own...  that process is at work again, but as BG takes up most of my time, it'll be a slow-burner...

But, it something I really want to do, a sci-fi game, not sure at what size, maybe skirmish, or maybe a full battle game...

So, with a view to this as 'medium-to-long-term' plan, I've started thinking about and collecting terrain and a few models. One thing I've always wanted, back to my first start in sci-fi gaming back with 40K in 1988 (actually we played a bit of Laserburn before than too, which is fondly remembered), is a spaceship. A model of one, as terrain... so you can do a cool spaceport...

So I started one... raiding deep into the shed-bits box, and using a broken nerf gun (there are way too many nerf guns in this house anyway). I've always been a fan of Jerry Anderson, not so much the stories, but the models and design work are tip-top, so taking his work as inspiration I've had two Saturday afternoons with the superglue out, the football on the radio and some seriously glued-up fingers by the end. The joy...

I have a vague memory of doing this, bits-bashing a spaceship, back when I was about 10, trying to make something that looked like it could be in Star Wars... funnily enough I'm no Industrial Light and Magic. Shoe boxes and toilet rolls don't cut it... but I did ask my Mum if I could take the hoover apart, as some bits and attachments would make good engines... funnily enough, with some unreasonable excuse, it wasn't allowed, and my spaceship was rubbish. Anyway, no hoovers were damaged in the making of my ship (so far)... although the side engines are the old thermostatic valves from the radiators.

Still more to add, and huge paint job, but grey spray primer and black washes are my friends here... 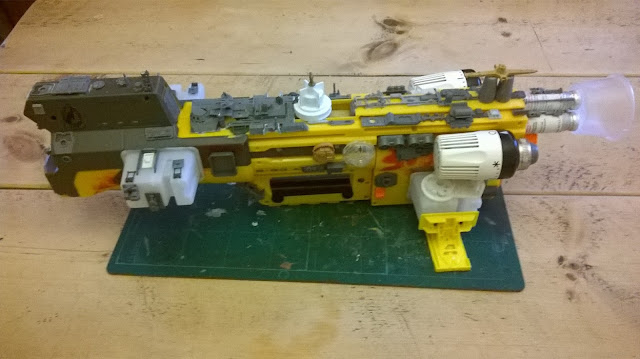 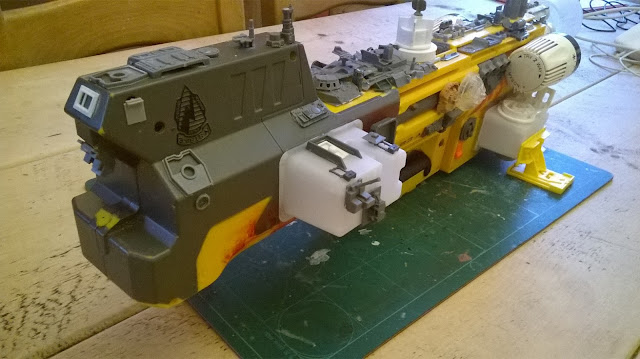 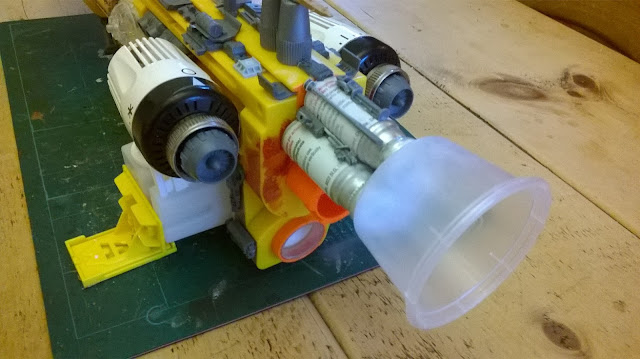 Serious depleted the bits boxes... next up a heavy black and grey spray paint.
Posted by Warwick at 02:59 3 comments:

Always a great weekend, with good players fighting it out in the right spirit, trying to win for their side, but not allowing competitiveness to get in the way of a good time. Each player fights for his side and earns it victory points, so you are just a cog in the larger machine of your army. No one player alone can win the day, you need the your fellow commanders to do their bit too.

Anyway, this year the venue will be at the 'Wings' Airbus UK social club, in Broughton, near Chester, on May 12-13th. Our hosts are the Deeside Defenders wargames club, with special thanks to Andy Canham for his end of the organisation.

There will be 3 battles each, 2 on Saturday, 1 on Sunday (then everybody can get a easier trip home on Sunday afternoon). Each battle is 500 points from the required army lists for that campaign - in this case: US Airborne, British Airborne,  British Armour or British Infantry, against German Panzer, Infantry or Fallschirmjager battlegroups thrown in to block Hell's Highway. All games are played at 20mm (sorry 15mm fans), and we try and theme the tabletops too, so it really feels like Holland (expect canals and bridges to feature)

Tickets are on sale with PSC, limited places, so if anybody fancies a weekend of hard fighting in Holland in September 1944, please come along, I guarantee a good wargaming weekend, maybe this time it won't be a bridge too far. 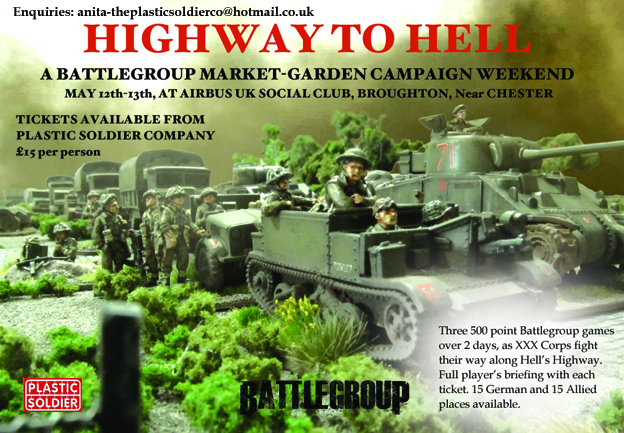