Soldiers of God Campaign, the Battle of Alhouz

Game 3 of my ‘Holy War’ campaign using my SoG rules, with the Muslim’s forced to defend the desert town of Alhouz from the advance of the murderous Crusader intruders from the County of Tripoli. Flush with their earlier successes, this would be a small field battle, with my Saracens having to defend, using the ‘Hold and Harry’ battle plan. The Crusaders where attacking, echelon right, led by dismounted knights and dismounted Holy Order knights, their strike force. My plan, was, archery, archery and, hmm, more skirmishing archery… if I couldn’t stop them with bows, my melee power was weak… a few infantry units and single unit of dismounted Ghulam (the Imam of Alhouz's bodyguard).

I had both flanks covered by three small units of horse archers, with the centre of infantry, screened by dismounted skirmishing archers (three more units). It would be a real arrow storm. Could the crusaders weather it and press on to break my feeble lines?

On my right, in the rugged hills, my horse archers and his Turcopoles would fight-out an inconclusive stalemate skirmish, trading arrows and unable to break either side. The main battle was determined on the plains down towards town. His right (my left) faced off, with his dismounted knights, backed by a Charge! card, racing forwards, but they had a long way to go as heavy infantry in close order. My horse archers would harry them every step of the way, galloping forwards (worth it by giving them the distance to fallback into), and peppering them. But the tough knights (now with experience upgrade from the earlier battles) and Knights Hospitaller were taking it, using Rally cards and March cards to get to halfway as my horse archers rolled back before them. One unit deserted and fled… tshk! My archers came forwards as well, to get into range and added to the storm. His centre, bereft of cards, was still on the start lines.

I was becoming a bit worried that my massed bow-power wasn’t stopping him, as disorder built and was quickly shed on Rallies… until a final Loose! card from my centre’s archers scored a big round of hits and his Resolve dice desert him, 4 hits, all failed resolves and suddenly the foot knights routed, they could take it no longer. Then, to add insult to that injury, the armed peasants behind his holy orders (in support, all modeled as monks and priests) panicked, as levy, and broke as well. The Knights of the Hospital were suddenly all alone.

His attack now looked considerable weaker, but another March, then that Charge! saw them reach my archers… and his flank’s commander used Bold Champion to charge in as well “Deus Aix!!". Let the carnage begin… or not, my archers did well, took a beating but then a crafty ‘well drilled’ card saw them shed most of it. Yes, archers are usually militia and well-drilled is for trained or better troops, but due to campaign experience, these archers were now rated as trained… good lads, they had held up the charge, for a bit, hopefully it would be enough.

As that fight continued, with me slowly losing, the Crusader's centre got moving, under more archery fire (today we had a lot of arrows to use). His men-at-arms also charged in and another unit of skirmishing archers was engaged, against my will. That wasn’t in the plan… but in return another Levy Panic card saw a second unit of his peasants break without ever actually meeting the enemy… you just cant trust a peasant! Cheap, but useless...

My army morale had dipped to 8 (from 15 starting), his to only 10 (from 17 starting). I was still losing, just. I couldn’t afford to let my archers die and be massacred and a lot of cards had to be thrown away to keep them going. Then a stroke of luck went my way (for once), the bold champion leading on his right called another bold challenge, only to roll 3 dice for his attacks and get 1,1 and 2 - oops… my mere archer champion won the duel, and his flank's leader was dead, costing him army morale and, more hurtfully, an action card a turn - unlucky that, but he had been just too bold and got himself killed in the fray.

It was a turning point…  lacking a card and with the Saracens now having the initiative, my horse archers decided that saving the melee-ing archers from their own arrows was only prolonging their certain death, and began shooting into the combat anyway. A few turns of that and Hospitallers were in a bad way with disorder (as were my own archers), and both broke at the same time… costing me a mere 2 army morale and him 10, for an elite unit routed and a flank’s battle wiped out… his infantry attack had been broken and the day went to Allah! Alhouz was saved. Yes, a win, with 6 MV to spare!

The Campaign Victory Points are now 2... all even. The next battle, for the new year, will be as the Emir of Homs and the Count of Tripoli both unleash their full might in large field battle, somewhere on the disputed border. It’ll be an epic clash, I’m looking forward to it a lot, time for my own big cavalry charge I think. Not seen a mounted Ghulam in three battles. The Emir of Homs also has his Al Halqa royal guards too… a unit that I've painted but never yet used.

Here are the three pics I got, before my phone ran out memory space (rubbish phone, I think I need a word with Santa). 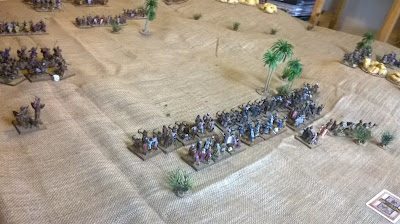 My centre deployed, skirmishing archers screen the infantry and baggage. On the lft, my horse archers have raced forwards at the gallop to face down his foot knights 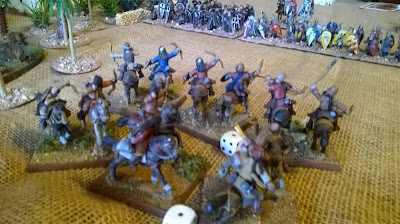 Those horse archers in action against the main attack on my left, passed the edge of town. I kept shooting, but on they came in determined fashion... worrying that they won't just die!  1 point of disorder each for galloping. 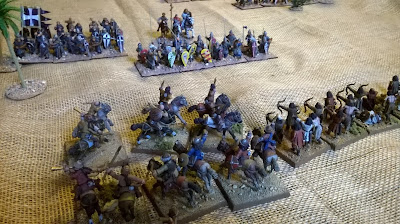 The horse archers have fallen back to the start lines, as the archers move up a bit, risky, but it worked, those leading foot knights paid for their aggression, routed by archery.  This flank was the crux of the battle... and I won it, wiping out his attack. To be fair, he has some bad resolve tests... but I needed win in the campaign... all even now, and big battle next.