Friday evening entertainment was a return to Fall of the Reich. It has been a while since playing a 1945 game, but I do think FotR is (arguable) the best BG supplement so far, just for its feel. All the BG supplements have their own feel and character, and I’ve tried hard to find and accentuate this, but FotR, IMHO, captures something very different to any other WWII game. The last gasp fighting is always brilliant, feels great, with straggling Germans holding out and always feeling ‘up against it’. The potent late war heavy AFVs are tamed (but still presence) and the German player always thinks he’s in for a kicking, but the game is still balanced despite the seeming asymmetry of the forces.

Anyhow, I would be attacking across the Oder with my Russians, crossing a narrow tributary stream of the Alte Oder, near a farm called Platkow, just north of Seelow. The German would be throwing in their fire brigade forces to halt me.

I went for a slightly different Russian 600pt force, forsaking all tanks for SUs, light, medium and heavy, 76s, 85s and 122s (of yeah!). Also, only 82mm mortar fire in support but relying on two timed IL-2 air strikes and a VVS forward controller and some extra air support (I must be due some aircraft counters). Optimistically, I had my Russian aircraft lined up ready.

The German ‘fire brigade’ force was, well an Atypical veteran SS panzer grenadier platoon tooled up with MG42s, extra MG42s, many panzerfausts, a panzerschreck, extra HMG42 (because 6 just wasn’t enough!). No half tracks though, they must be parked up a few fields back, with the platoon footslogging forwards the last few hundred yards to contact. These veterans would  be supporting a StuG, a Hetzer and Tiger II (elite panzer ace of course), with a Luftwaffe 88 and PaK40 too. No artillery support at all (obvious the local artillery was already out of ammo and pulling back). Small, but very hard hitting, the German battlegroup lacked officers (just 2 to my 5) with a BR of 32, compared the Russian 38.

Forces picked, it was time to strike out for Berlin.

We started with D6 + all scouts deployed on out table edge. The Russians started with infantry, mortars (on table) and their jeep recce team (as mortars potters) and a sniper. The German rolled 1, and had no scouts, so deployed the 88, well back, covering the open fields on my left (his right). That 88 (and loader team) was holding the line whilst the SS raced to join them.

I won’t go into the ins and outs of every turn, with both sides arrive at speed, but the Russian struggling to cross the difficult ground of the stream as the Germans got into position, MGs (just 7 of them) trained. The 88 missed at long range and my return mortar fire was wild (for 4 turns in a row), having no effect except ploughing the fields a bit. The mortar team would fail to do anything all game, and then be killed by a low-level FW-190 bombing run along the stream, which scored direct hits ion both! Yep, the Luftwaffe turned up, the VVS did not!

That was kind of the way it went, the Russian fired at long range, scored some hits and then glanced (off the StuG, then the Hetzer with 85mm shells from the SU-85s). The return fire from the ‘88 and Hetzer found its mark and didn’t glance, soon SU-76s and 85s were burning.

On my right, my ISU-122s faced the mighty King Tiger, and I figured 2 to 1 I could risk making the first move, it would probably cost me 1 ISU, but I’d then get 2 good shots back next turn from a static ISUs 122m gun against a static tank, and get my first Tiger kill. This was the exciting crucks of the game. The ISU-122s rumbled into view and both €fired, both missing. The panzer ace then, cool as a cucumber, took aim at the first, spotted it, hit it and destroyed it. Then, second shot, spotted it, hit it and destroyed it. Both ISU-122s gone in one turn.

Meanwhile the German Mgs were pinning then killing my poor infantry in a hail of bullets. The firepower was frightening and my infantry in the open fell back, only to be hit again and cut a part. Even my timed airstrikes were les that impressive, scoring 1 direct hit in 8 bombs (on infantry). Small consellation when the Luftwaffe then showed up and bombed me. That was too much for my boys, they ran. End of game.

...well a good kicking once in awhile is good for the soul (keeps you humble). There would be no break through towards Berlin at Platkow.  Chalk that one up as bad day (in dice rolling it was bad, in counter pulling it was horrific). Back to the drawing board. 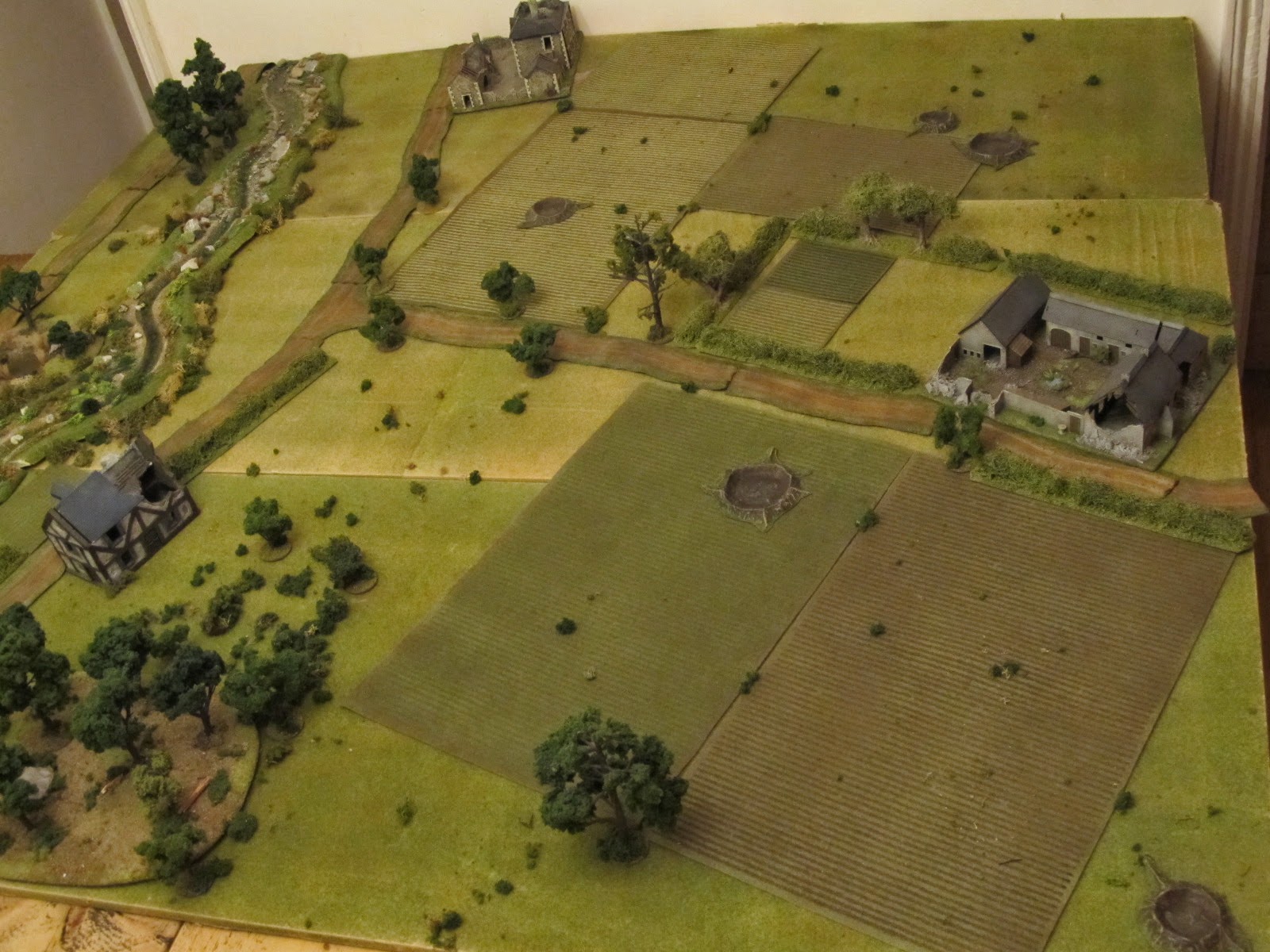 Platkow farm on the right, the German side of the tbale, the Russians would be crossing the Oder stream on the left. 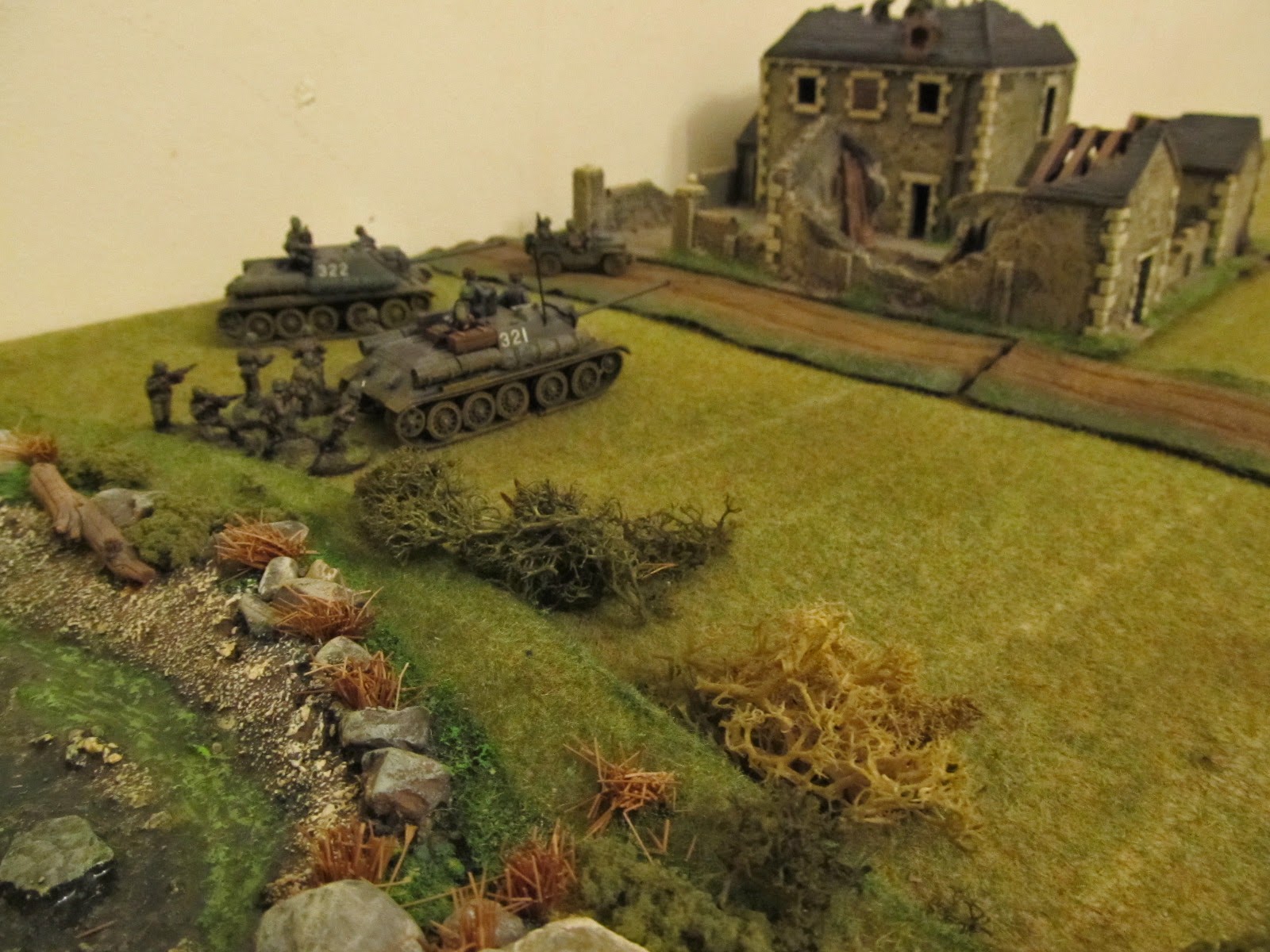 The Russian left, SU-85s use the farm buidling to cover them from the watching 88 across the table. Jeep recce team has already set up their mortar observer post in the farm. 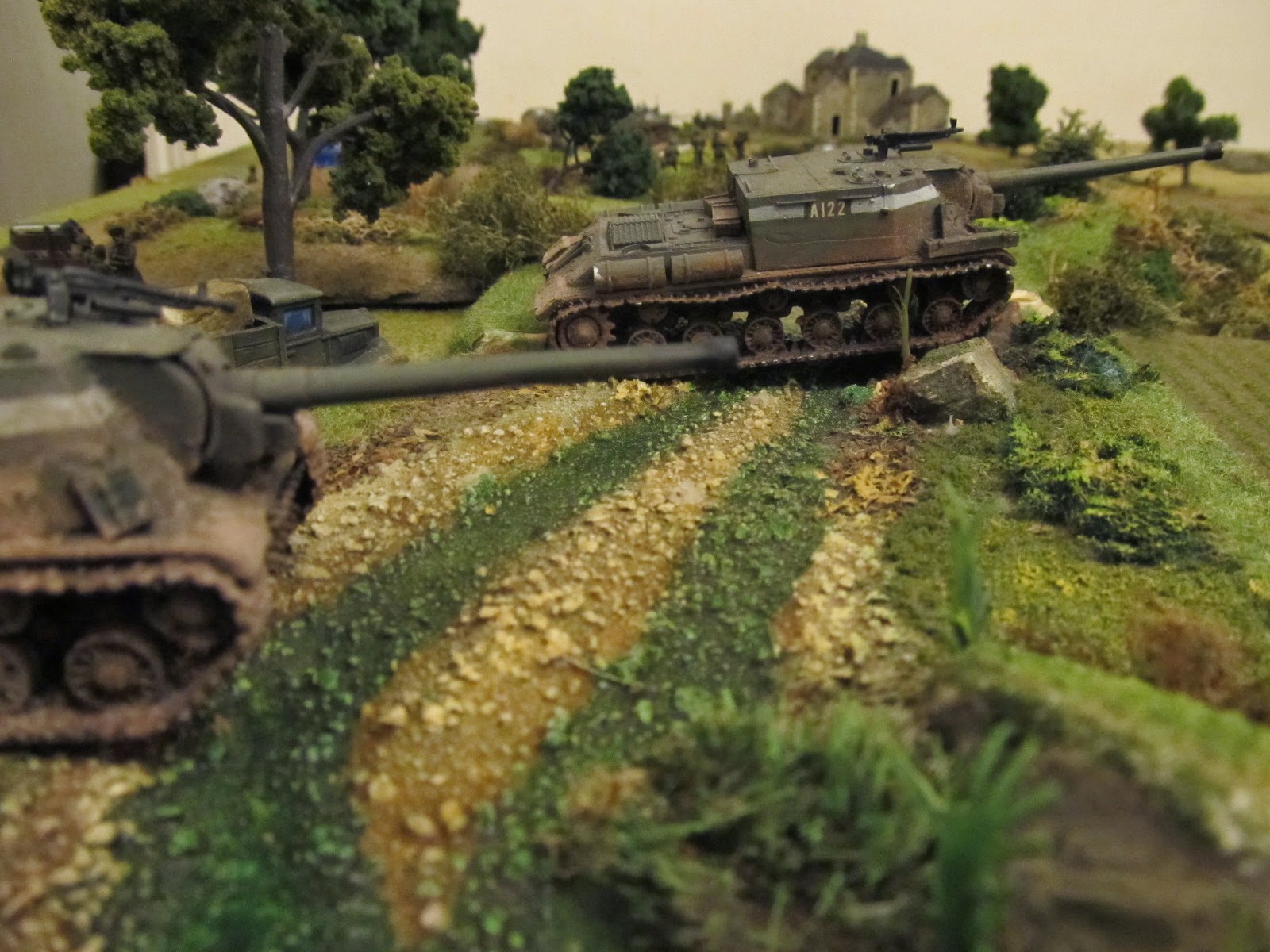 The ISU-122s struggle over the stream. Meanwhile, the King Tiger was quickly in position to meet them. 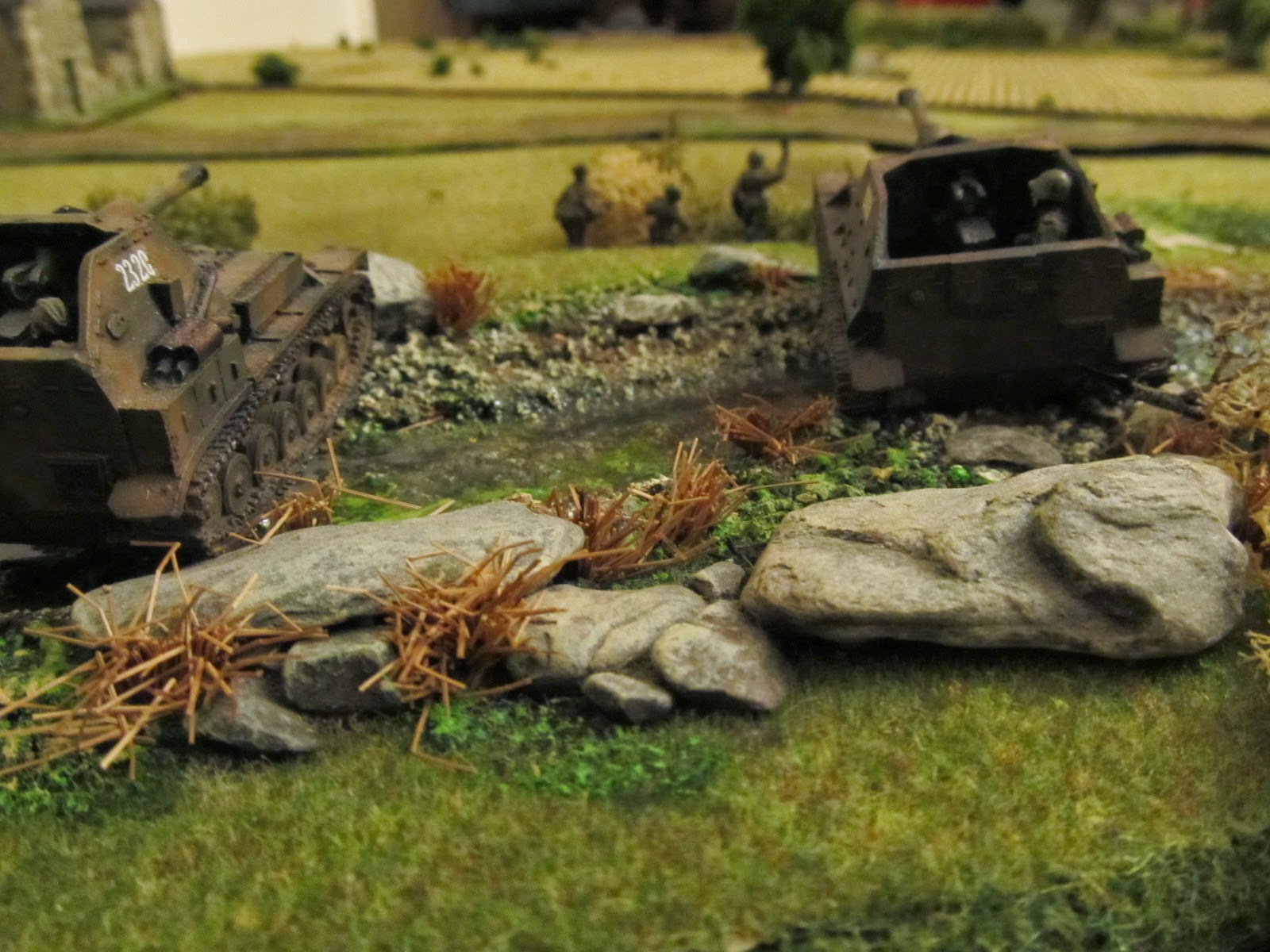 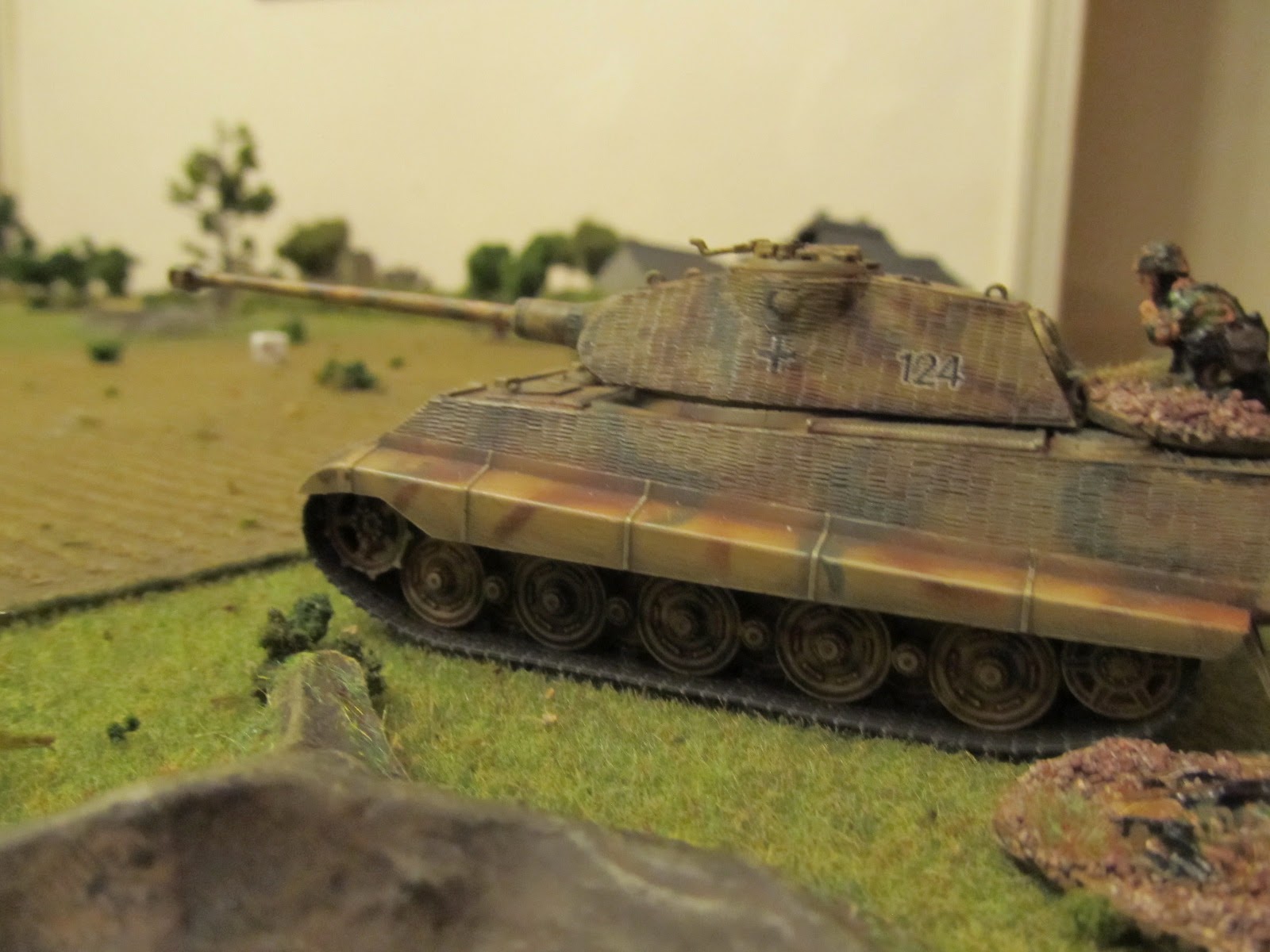 The King Tiger arrives with MG team as tank riders. 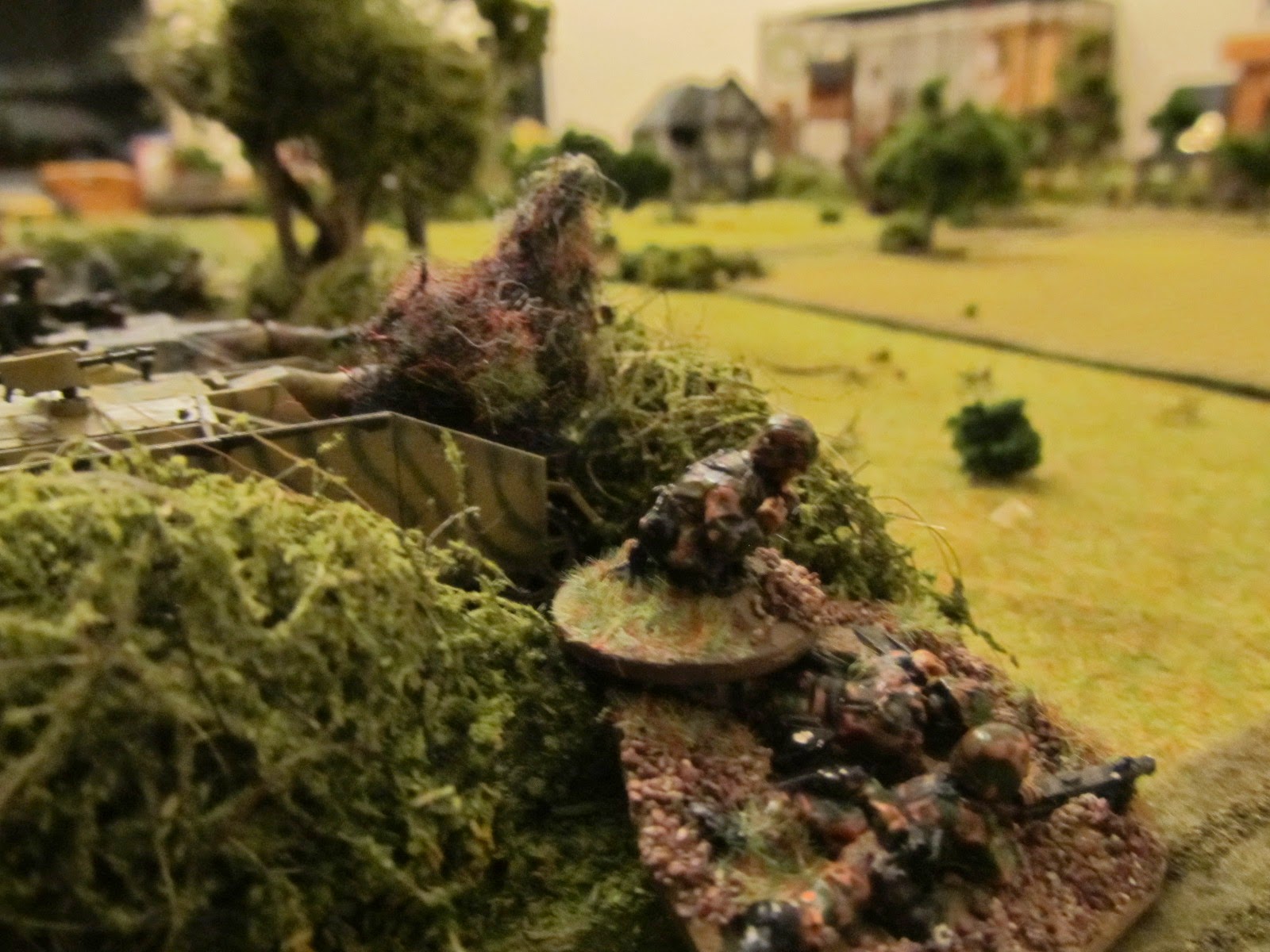 Pinned StuG and MG team holding Platkow farm and sweeping the stream ahead with fire. 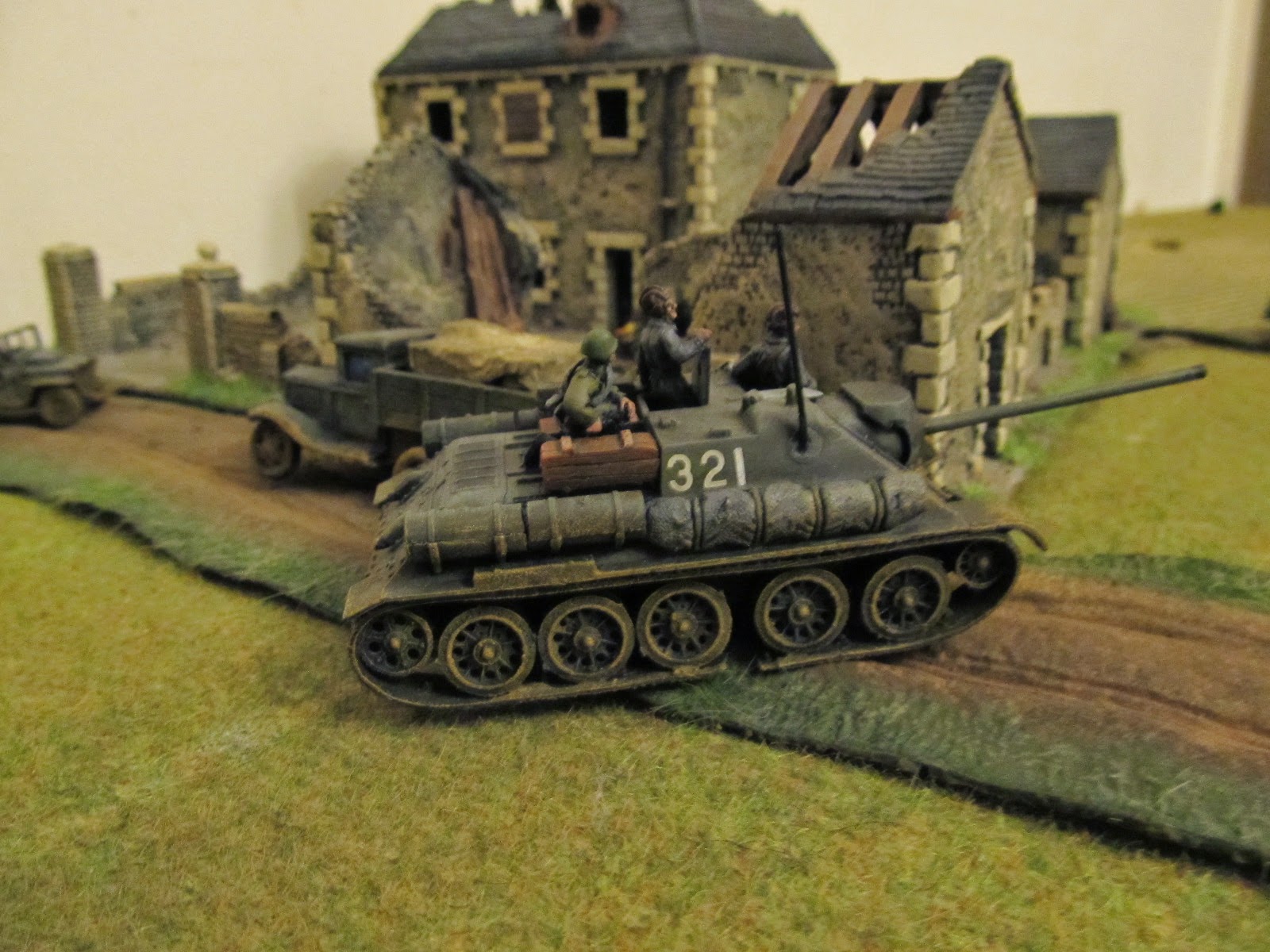 The last SU-85 returns that fire, whilst the supply truck waits, it wouldn't be needed. 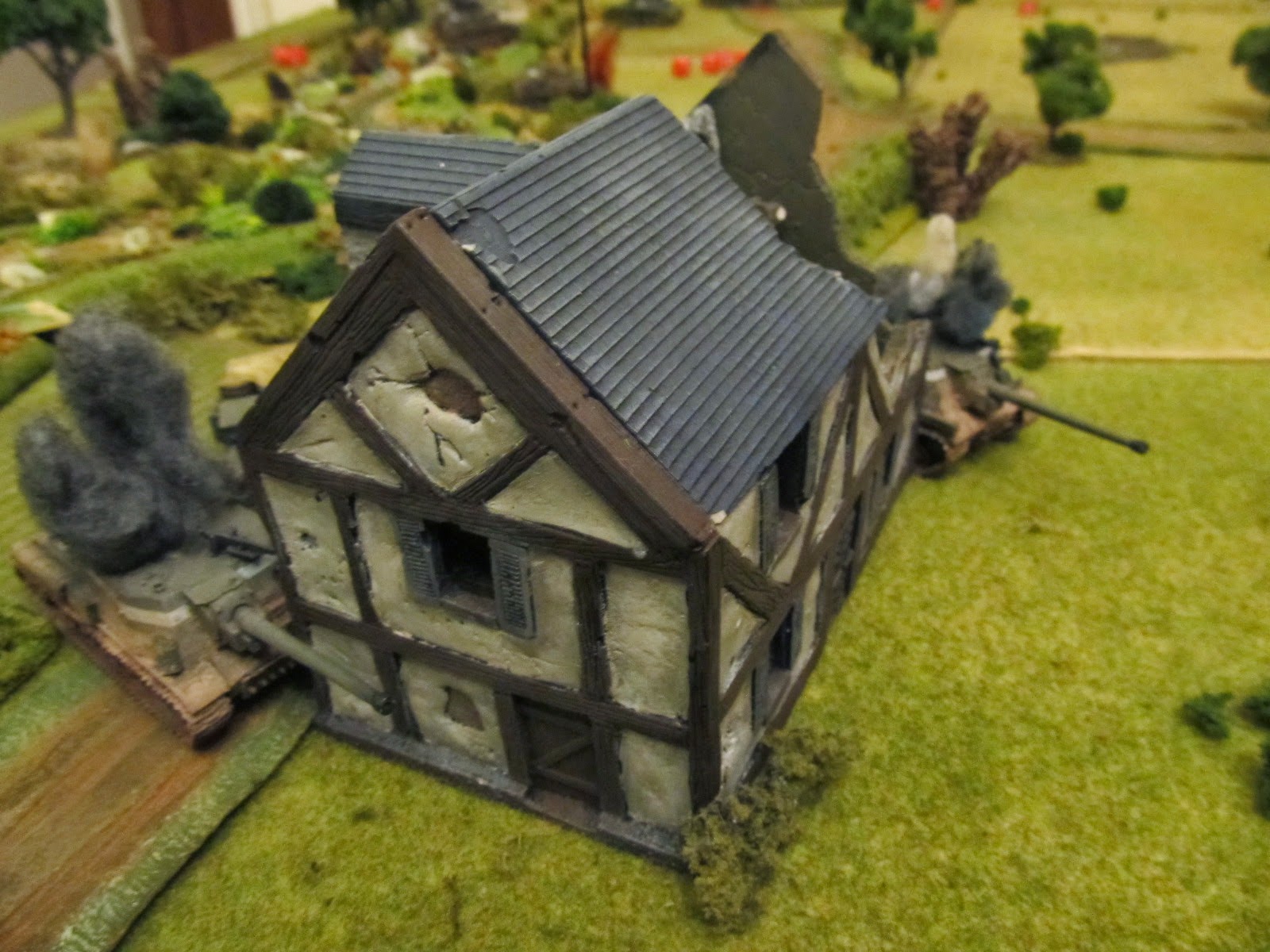 End game. Both ISU-122s are burning after the King Tiger opened fire with devastating effects. The buidling had been swept clear of infantry and the sniper  by overwhelming HMG fire.