Another fine big game with the Irish-boys of the GMG club in Kildare. A truly top day of battling, a great looking game, good laugh, useful play-test and again, the wrong result... but like it really matters if you're enjoying yourself! (consoling himself a the NKVD leads him away).

Piers has already posted a great AAR on the Guild wargames forum, so I'm not going to repeat it here. He also has an article planned for Miniature Wargames magazine. So, instead, here are a bunch of my photos from the day and little bit of extra commentary and some comment on the rules.

Bear in mind, I was commanding the 'refused' extreme left flank, with a small force only meant to delay the Germans, and the rest of my forces were aiding the defence of the bridge beside Don's battle group. My orders were to hold, harass, and then pull back for the main fight for the bridge. The photos are a bit biased to my table side.

We were going to let the Germans get close before counter-attacking to force a close range brawl. Well, that was the plan, but as ever, the enemy spoiled it with their big tanks and bigger guns! 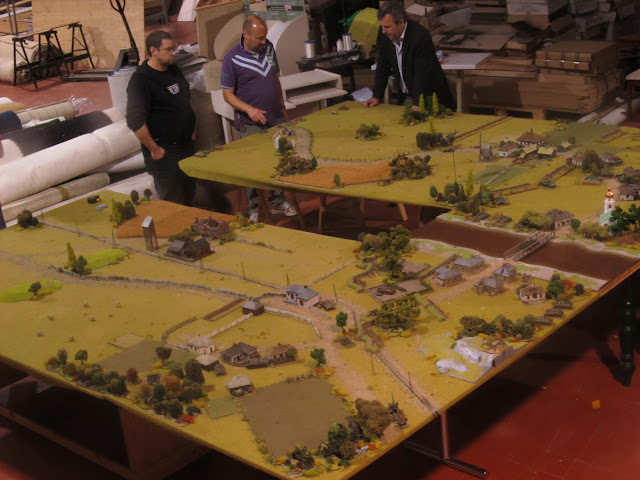 The Germans begin their deployment, along way from the Russian lines, which we deliberately set deep into our table half, to draw the Germans on and offer few targets early in the game. 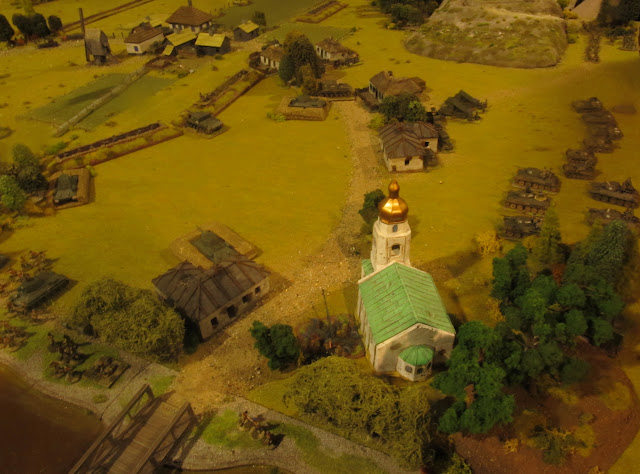 The Soviet right, with the counter-attacking armour awaiting the call to advance on the back table edge. The Katyusha battery was our biggest artillery, and one vehicle withdrew after they played a 'Confusion' counter on it. Obviously they thought they had been ordered to withdraw... they can see the Commissar later to explain that one! Dug-in T-34s and entrenched infanrty formed our MLR. 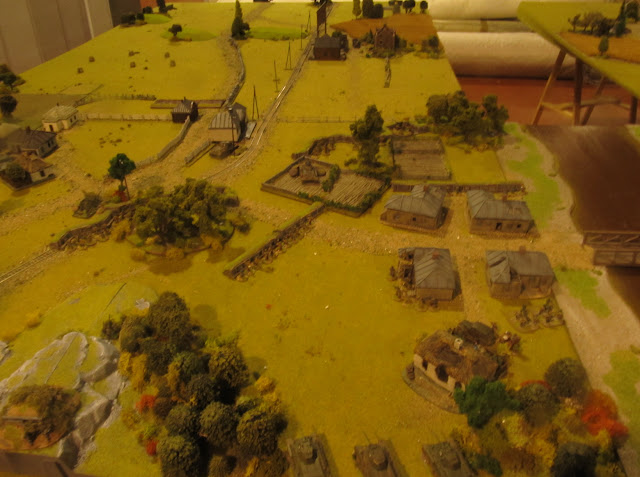 The Soviet left, mostly dug-in to trenches guarding the village and the bridge, gaining them a useful 3+ cover save to avoid damage and pinning. 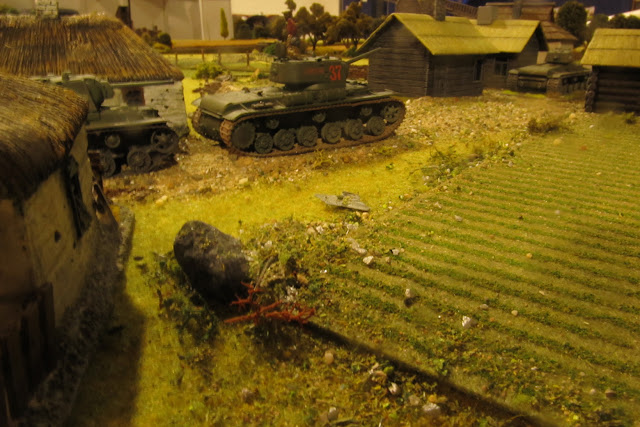 The KV-1s formed the 'forward' armour on our right, because as heavies, they lack the 'Stal!' special rule allowing them to make rapid attacks. 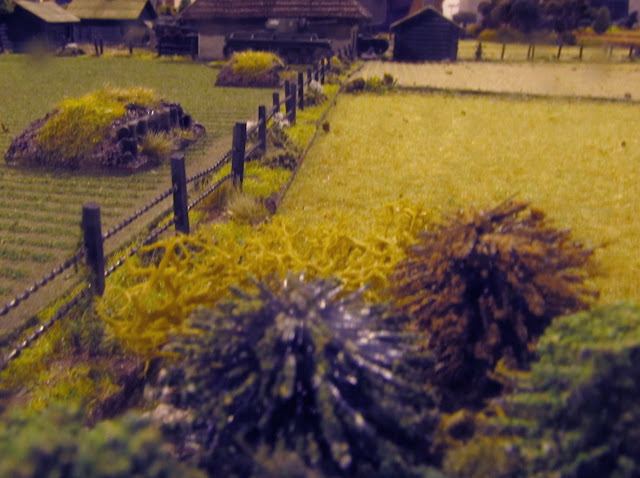 MG bunkers, deployed to cover our anti-tank ditch and minefields against enemy pioneers. One was unluckily destroyed by a direct hit from a 150mm gun in the German preliminary bombardment. 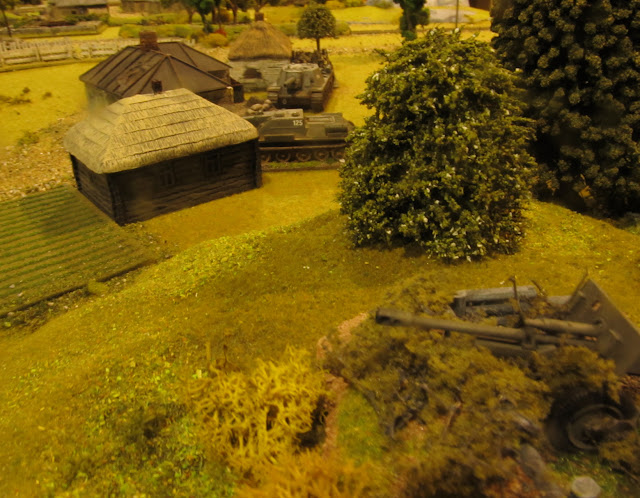 My small armoured force, an SU-122 and SU-152 lurking.  Given the onslaught heading their way, I didn't give them any chance. 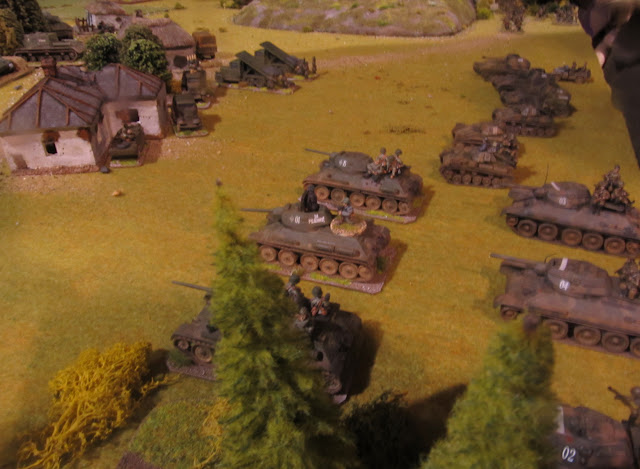 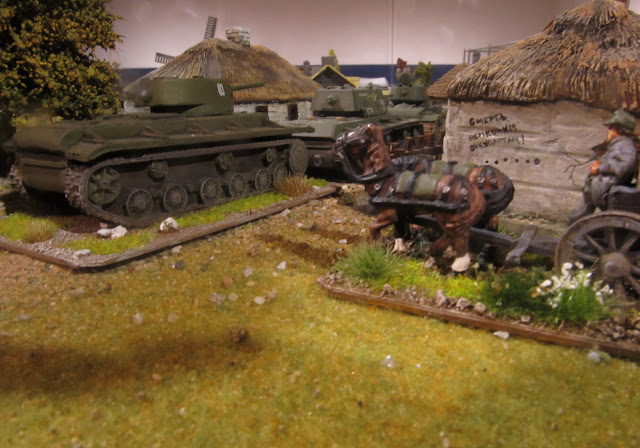 More KV-1s move into the village on our right, passing a supply cart. In my experience Russian supply vehicles rarely see much action, few AFVs survive a prolonged engagement with the German armour, and generally ammo capacities are quite good for the main fighting tanks. 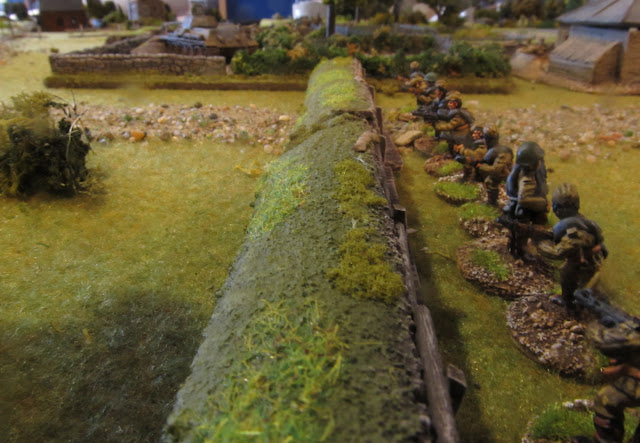 Don's brave boys in their trenches. 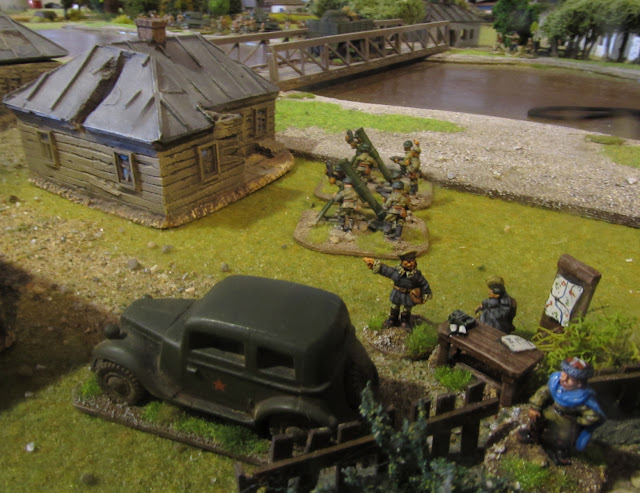 One of our supreme commanders and a nearby 120mm battery. In this game we allowed each player to have a Forward HQ. As a senior officer they gain a special 'Tactical Co-ordination' rule, allowing them to attempt to remove a single pinned marker from one of their units. This meant that multiple units on each side could use this rule (4 for the Germans, 5 for the Reds). In most games it would be 1 only per turn. This would have a big effect over the course of the game, generally aiding the Germans, helping them keep their biggest tanks from being pinned. 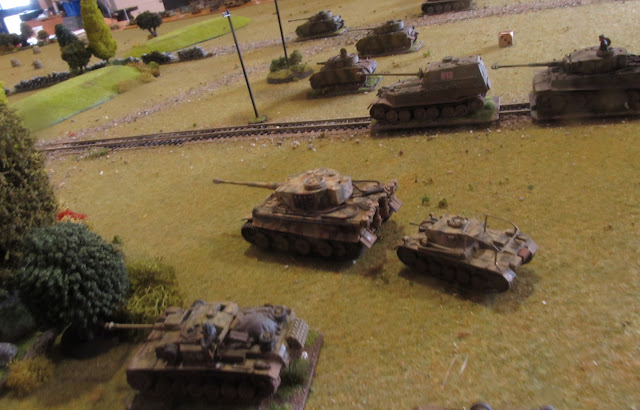 The Panzerkiel spread across the steppes as the Germans begin their long march to contact. 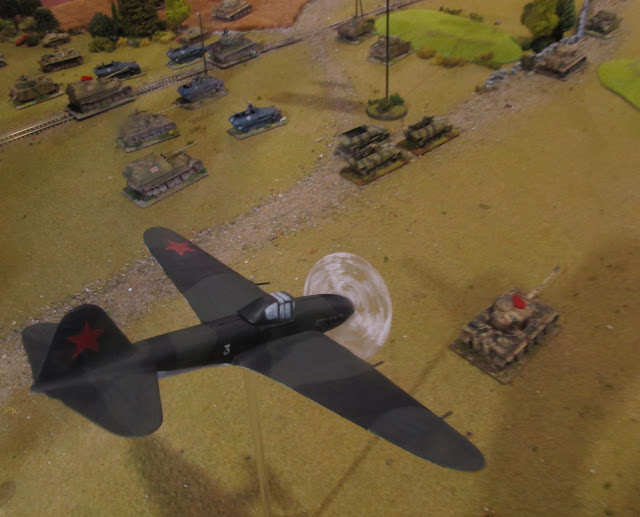 Early doors we got a IL-2 Sturmovik air attack, armed with 37mm cannons. It strafed away for 6 turns, evading all the flak thrown its way, which wasn't that much. The Tiger turned out to be too tough to kill (here it was only pinned), but the 'Beast' went on to get an armoured car, ammo truck and a radio van - electing to go after those easier kills instead! 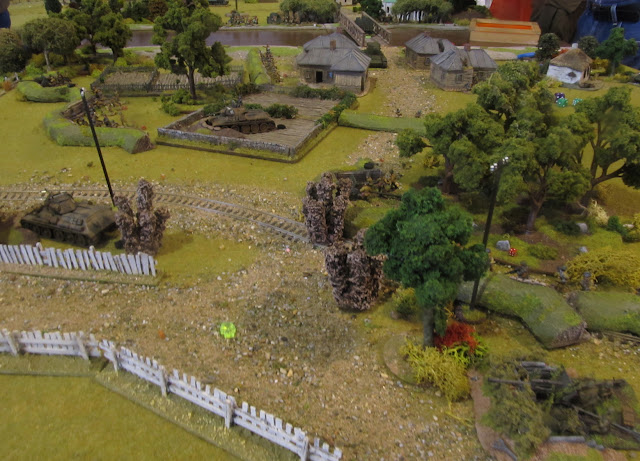 Dug-in Zis3s and T-34s under 150mm barrage. Their high cover saves made the barrage less than effective. 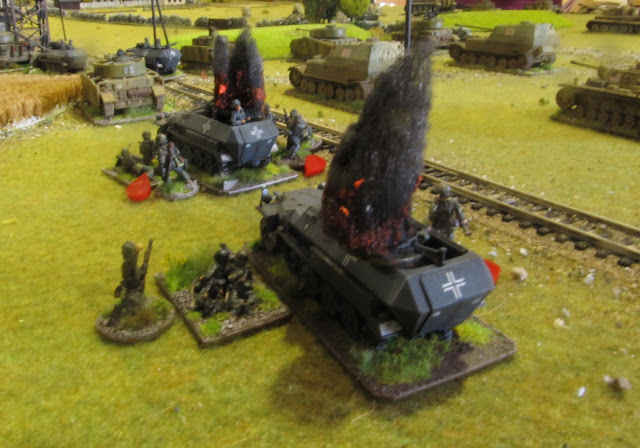 Stray 120mm mortar rounds destroyed 2 SPWs and caused the bailing infantry to be automatically pinned. It was along walk from there! 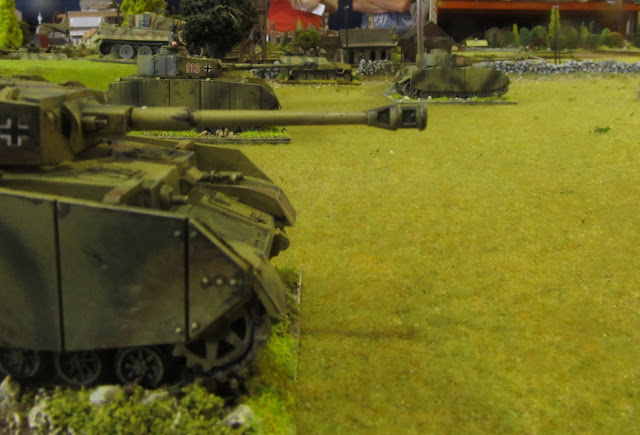 Panzerkiel, the tanks kept up a relentless advance amidst harassing mortar and HE fire. 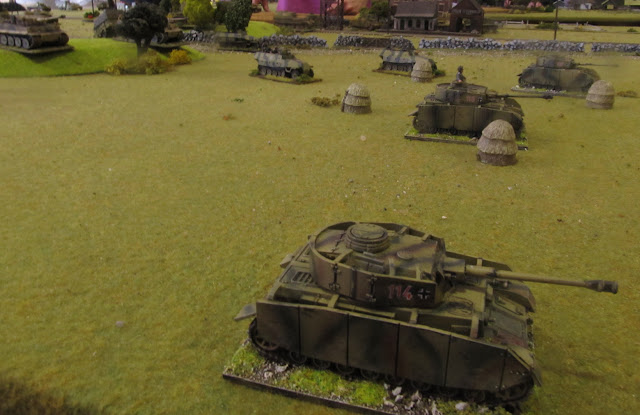 Through the harvested wheatfield, with SPWs behind, and Tigers on Ambush fire ('overwatch' style interrupt shooting) on the hillock. 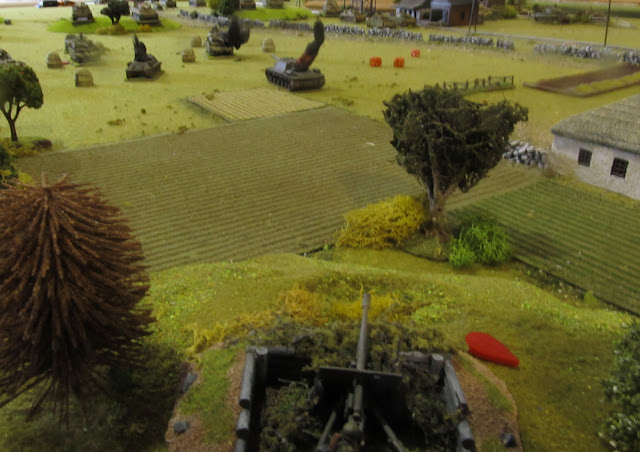 My Zis3 gun put up a heroic fight, firing a lot of HE as Area Fire to pin the en-coming Panzers. Out front my two SUs burn, but not before getting a Pz-IV and an SPW. The Tiger and an Elephant ended their brief, bold, delaying counter-attack. Recriminations about wasting my armour came latter. 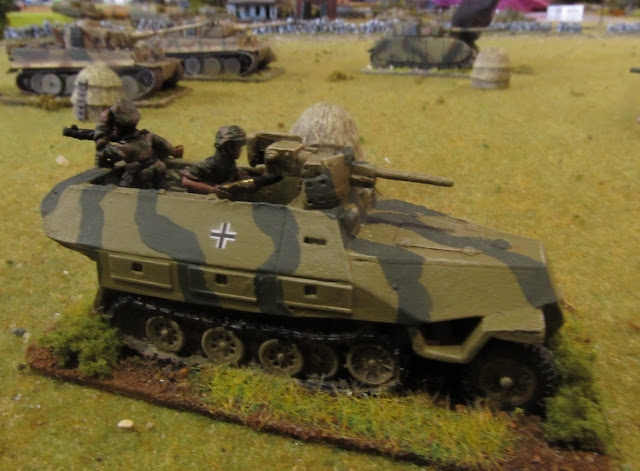 251/10 spotting for mortar fire against my Zis3. The 'officer' unit it carried has the mortar spotter special rule. 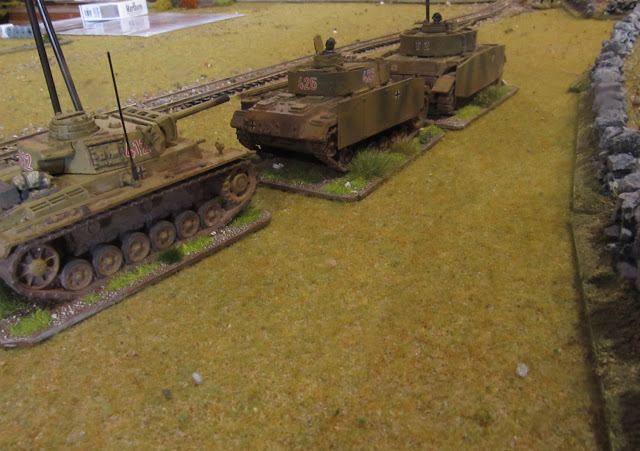 A Flammpanzer bringing up the rear as the lighter armoured approached the bridge and village. Perhaps it's to light Piers' Malborough! (Oh - great idea for a novelty lighter). 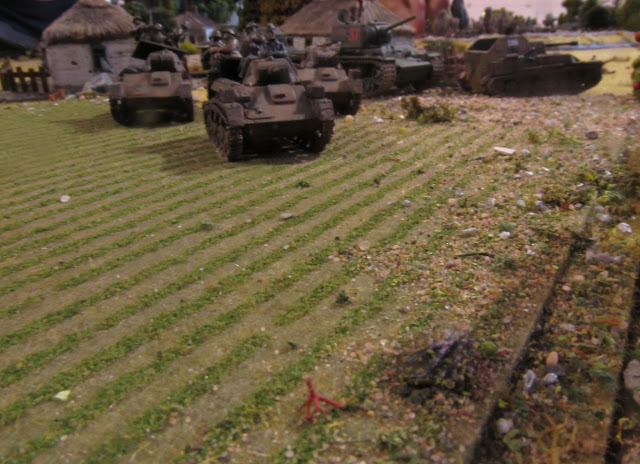 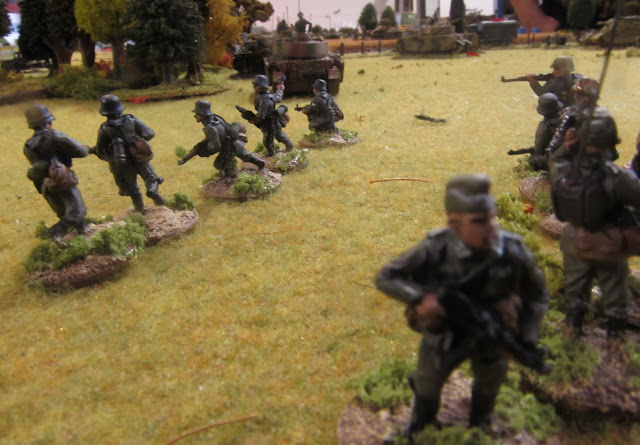 Footslogging German infantry. On such a large tabletop, walking meant they struggled to get into the game. Just as for real, the Panzers ran on ahead to fight their own battle. The infantry could have tank-ridden! 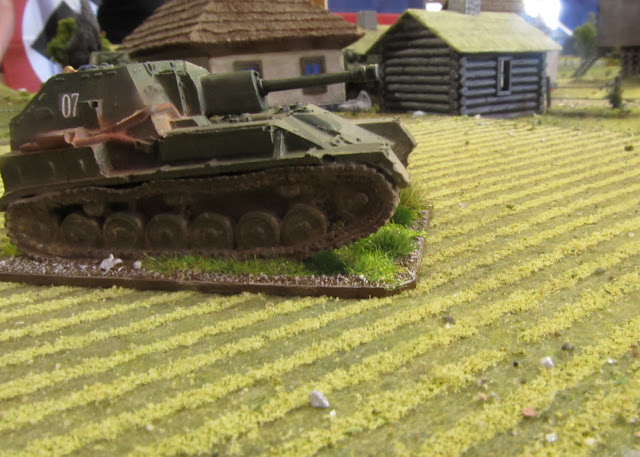 One of our 6 SU-76s, their guns scare the Panzers far more than that on the T-34. Unfortunately, this makes them priority targets for the Panzer crews, and they don't have much (any) armour. Still, they provide valuable fire support. 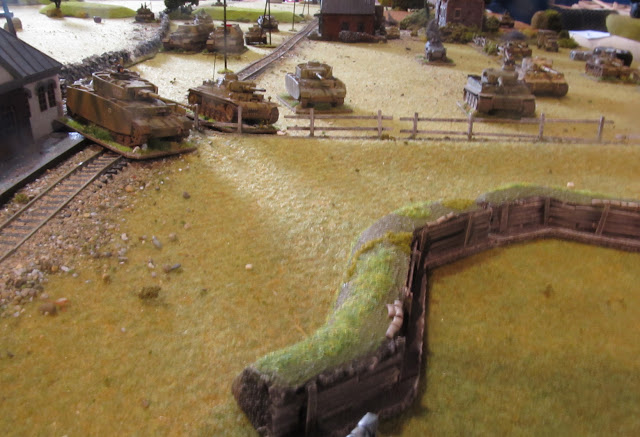 The Panzers face the (now cleared) front trench. Their machine guns, then the Flammpanzer, swept the trenches clear. Our infantry, lacking AT grenade upgrades, had no reply, and just got shot-up. 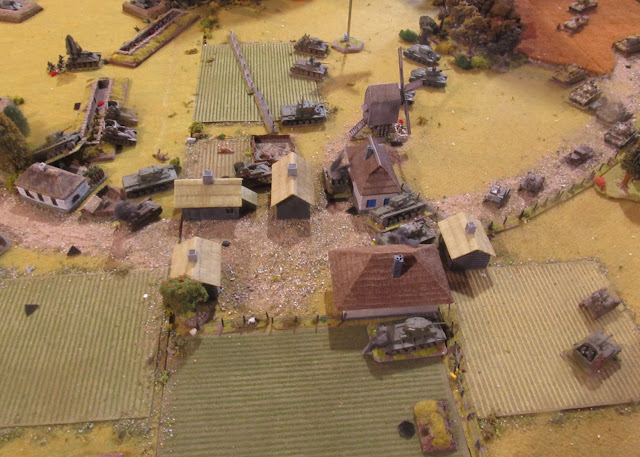 The Red tank assault. A mad tank charge is a valid tactic, to close the range and get side and rear shots.  The 'Stal! Stal! Stal!' rules allows Russian light and medium tanks to do this. Here the multiple forward HQs saved the German's bacon, because every Pz IV was pinned by HE fire as those T-34s closed in. 4 recovered using Tactical Co-ordination, and then quickly destroyed a lot of T-34s. In most games, only 1 tank could have been unpinned, and most of those T-34s (about 9 I think), would have been free to get up close and starting scoring some kills themselves. Here the battle was really won or lost in one turn of devastating tank fire. 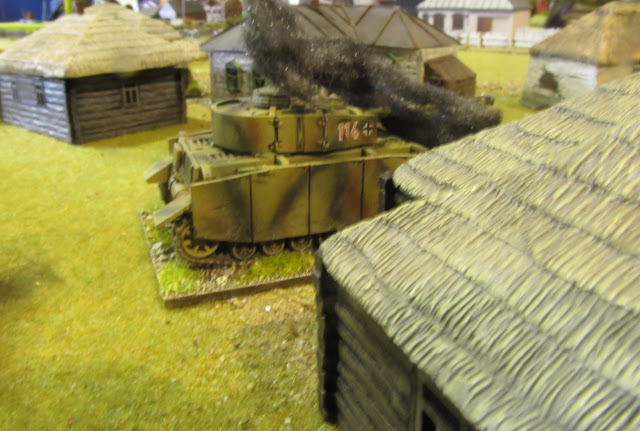 The lead Pz-IV on the Soviet left was hit by 3 T-34s. They can be killed at short ranges. Also, Ausf Gs are far more vulnerable than Hs, and Hs are a 'Restricted' unit in the German army lists. In the main, the Ausf G will be the German's workhorse battle tank - as it was. 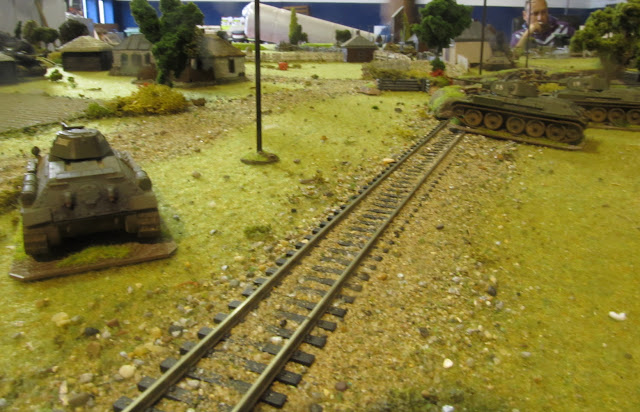 The T-34s that shared the above kill, shortly before Piers' dice rolling voodoo kicked in and all three died to extreme range hits. Some German guns have an extended range band over most, and the hitting power to penetrate armour at those long ranges too. Beware! Will looks serious behind - the pressure of command. 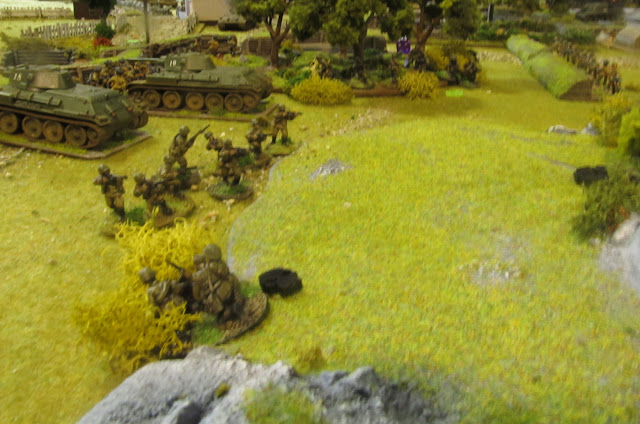 My last stand, having withdrawn my rifle platoon and MG team before the Panzers overranmy flank. It was about to get messy (for me) when the game ended. 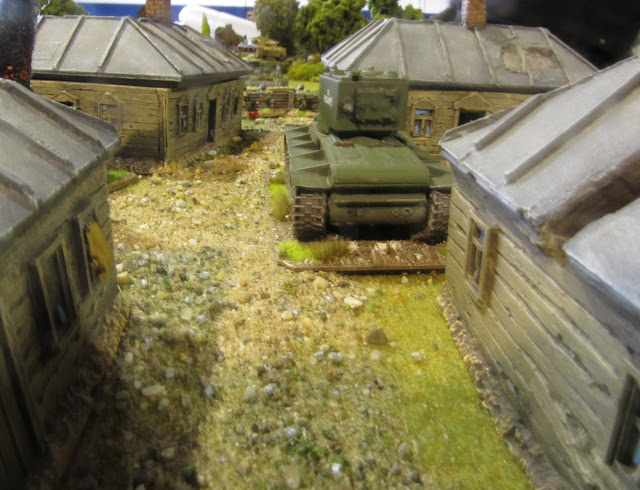 The KV-2 bridge guardian, a rare beast in 1943 and a Unique unit (one only per battle group). It didn't last long faced by a Tiger tank. 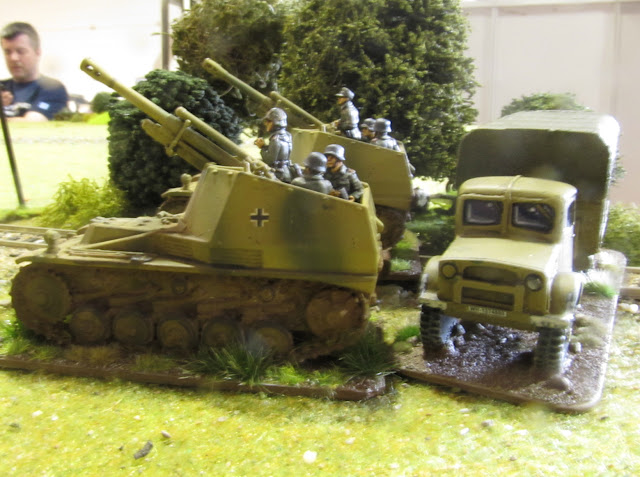 German artillery and its ammunition truck, although most was off-table. We successfully used 3 counter-battery fire missions to halt various Nebelwerfer strikes, but it wasn't enough. Overall, the German artillery proved far more effective than our own. Russian artillery is a tricky beast, lacking forward observers and relying more upon registered target points. Its one of the things Russian players will need to learn how to handle best, because its isn't as versatile as the German guns, although the Soviet batteries are large when they do fire. Obviously, we still haven't got it!

Apologies for the 'yellow-ish' pictures, my camera had the wrong colour setting for the warehouse lights. As you can see, the game played very much as a 'Kursk-style' battle, which was most gratifying.
Posted by Warwick at 09:35 2 comments: