A Sunday afternoon game of NorthAG, worth revisiting the rules after awhile, to see if they still stand-up and my opponent had been keen on a game for awhile, to run out his Royal Green Jackets battlegroup (the unit he served with).

The game itself was a 700 points, a company-sized game, and lasted 5 hours, which is long, but one player was brand new to it, and I was doubling checking rules often - and couldn’t find a few (AA missile vs helicopter, where are you!!).

Roughly, the BAOR where;


The game begins with only the forward screen on the table, his dug-in platoon holding an objective, whilst my armoured recce patrols headed right, to seize the factory objective and form a screen on my right, in the woods. My AA battery awaited on ambush fire.

Th first 2 turns are just the recce phase and the scouts manoeuvred, the Scimitars reaching the road junction that would be the crux of the battle and claiming it, as my recce troops took the factory building. My ‘Shilka’ and SA-9 both fired at the Gazelle as it hugged the ground, to spot for the Abbots, and pinned it (good). My first timed 152mm arty strike was too early, smashed into the woods on the British hill, to find nothing there… oh dear.

Turn 3 and the Vanguards arrived, the first Chieftains plowing up the road to secure the objective from the Scimitars. My tanks deployed en masse. Three would be a diversion, to draw away his tank fire to the right, and they set off at full speed, heading for the ploughed field. The others massed for the main assault on my left. Unfortunately, unpinning from mortar fire, the British pulled a Gunship counter and rolled well for it, an unexpected Lynx choppered in, 8 tow missiles ready… eek! My ‘Shilka’ turned its guns on it and in a blaze of fire pinned it too. The British FOO final got his radio tuned in and call in the Abbots, but their first salvo caused only a single pinned T-64. They would continue their fire all game - the Brits with 3 spotters (Gazelle, FOO in his foxhole on the hill and skulking Ferret armoured car) and a comms re-roll when the Tac Ops track arrived, it was hard to stop them shooting (no counter-battery fire missions - lesson learnt).

Russian mortar fire was on the far hill, harassing the infantry around the objective. A lucky hit blew his Milan post sky-high, and a bit of pinning, but nothing to worry the guys in their foxholes overly.

The initial jockeying for position was over, time for the main event. My tank company rolled, unleashing HE suppressing fire and pinning a single Chieftain. The return fire was, well, wide of the mark in some poor dice rolling…

Unfortunately, it was now turn 5 and the main column could start to roll in. 3 more Chieftains, the Tac Ops track, the Ferret… suddenly it was 6 Cheiftains to 10 T-64Bs, not good odds. One T-64 also broke down and was immobilised on a special counter. So 9 vs 6… I needed more tanks, but reinforcements requests can only be made from Turn 7, so I would have to soldier on.

I tried, but the British tanks found their range and in 1 turn executed 5 T-64s, the fields strewn with burning wrecks, and first company was all but done already. My second timed arty strike hit the road junction and caused pinning and destroyed a Scimitar. The second Scimitar died to a T-64s long range shot. The two British helos, in tandem, where both struggling to get into the battle, heavily pinned by Shilka and incoming SA-9 missiles. That duel would go on all game.

On my right, the three T-64s, (the diversionary force) were now the man threat, and 3 Chieftains came after them. One was pinned by a unseen RPG shot from the woods by my recce infantry team on ambush fire… result. The others started to do their thing, and suddenly I had only one T-64 left over there too. But the diversion had done its job, drawn 3 Chieftains to them.

Turn 7, need reinforcements, and I asked for a Hind gunship… with those Chieftains to kill it carries the grunt for the job. In it came, hurrah, lining up the Chieftains at the road junction. Until, whoosh, the Rapier on ambush fire launched and rolled, 6, followed by  6… then I rolled a 1 followed by a 1 - boom! Blown out of the sky, and 2 chits for the loss… hell, this was not going well, as my best AT asset went down in a big fireball.

The Brits also requested extra aid, Airborne troops (he has 2 Pumas full of paras!). This first request was turned down - good. My next request was for extra tanks… I only had 2 left rolling from 1st company. It too was turned down… for now. I couldn’t ask for another gunship, because you can only have 1 successful request per game for any assets. In turn 9, I asked for the tanks again and they were granted, and en route, 10 more T-64s. That had the Brits worried, but he still had 6 Chieftains, all now unpinned.

My late timed air strike saw the MiG-23 streak in and bomb the road junction, pinning a tank and an FV-432, having dodged the incoming Rapier shot. Not bad for a cheap hit, and counter for ‘under air attack’ too.

Both sides had taken a lot of counters… but the Brits were ahead. A lull in the first wave of fighting, waiting for a turn (both with poor orders), then it was time for the second tank assault. Not splitting up this time… 10 T-64s piled forwards and unleashed more HE suppressing fire at the Chieftains, pinning 4 of them - yes! Unfortunately, the Lynx was now unpinned and pop-up to smash one T-64 into scrap with a TOW strike. The Abbots were also back in action, adding some pinning, from the Ferret crew on the radio.

The Brits used their last reinforcement request and boldly went for airborne support again… and passed. Drat. 2 Pumas and 8 more infantry stands inbound for anywhere on the table. My ‘Shilka’ and SA-9 would be very busy… but they just couldn’t roll well enough with multiple targets to go after. The first Puma deposited its paras for an assault on the factory objective, where my infantry were pinned from early artillery fire. There would a short close assault in the building, but the paras won it, loosing 2 stands in the process but claiming that objective, after a ’66’ destroyed my BTR-60, the last unit holding it. My infantry were too scattered to counter-attack, and my orders rolls weren’t good either. What orders I had went on the tanks, which rolled forwards and switched to AP rounds. Several hits, but no penetrations… these Chieftains are tough… and now unpinned. Their return fire was accurate again… and 3 more T-64s were wrecked.

I was close to breaking, 1 more chit would do it. That chit came when the second Puma swooped down and 4 more para stands hopped out and open fire on the objective in my deployment zone (my corner). Another ’66’ launched and found its mark, my SA-9 AA armoured car, and it destroyed. That counter broke my force… BR total 57, counters now totalling 59. Game over. This Russian attack was called off… resistance was too fierce. There was no way through to Hannover here today.

The Brits had reached 43 BR from their total of 60, so a solid win. I’d lost 13 T-64s for, err… no Chieftains… a bit embarrassing really. A good game and a good test, I have a few tweaks to make… but it played well, the objective rules again worked really well, and the reinforcement rolls (which are an optional rule as they can swing things wildly and make the game longer), I like. He had used 2, and got his Airborne platoon from them. I had use 3 and got my ill-fated Hind and 10 extra T-64s - the second wave. It wasn’t enough to win the game for me, but it put me back in the game when I looked out of it.

Artillery needs some thinking about, his 4 Abbots were harassing, but killed nothing. My 152mm timed strikes… well got 1 Scimitar. Need more of them really, they might have to be a bit cheaper in points. I have downgraded artillery effectiveness from BG though, to try and focus on the tank fight more.

Here are few bad snaps, busy with the game and explaining rules to a new player, so it was all a bit of rush. Still, you get the idea and hopefully and idea of the size of forces too. The board was 6 x 6… perfect for a medium ‘company-sized’ game. All models are 10mm. 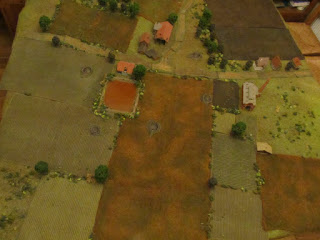 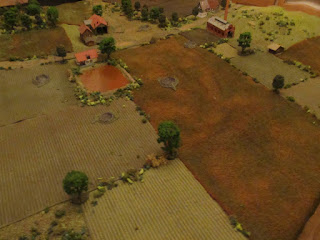 Across these fields the Red Army will come. 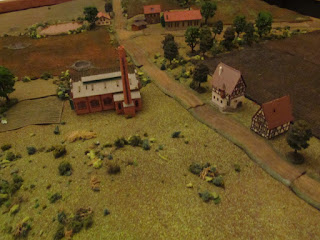 The road and the factory objective. Road junction beyond, another objective. 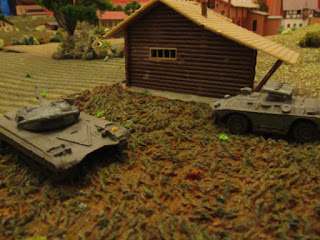 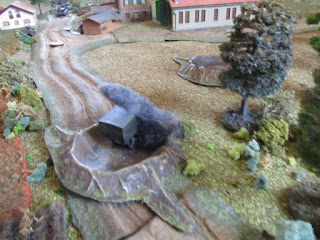 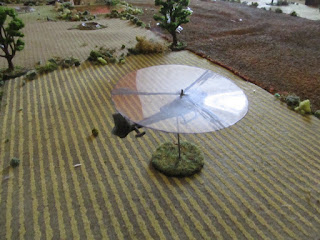 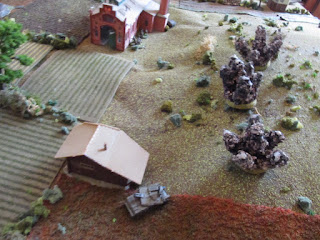 Abbot barrage smashed onto the hill, but doing little 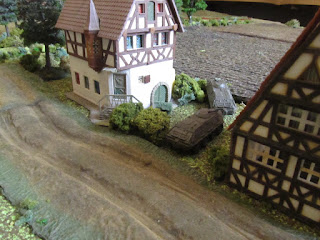 Recce BTRs rolling out to the right, somebody garden is getting wrecked. 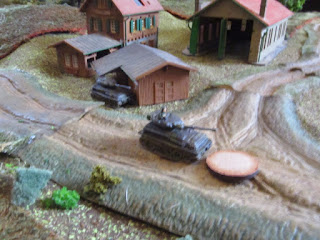 Scimitars first to the road junction 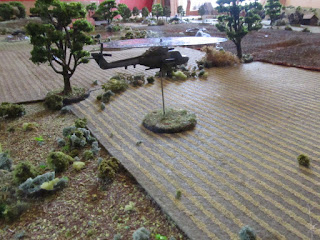 A lucky early Lynx gunship arrives to help out. 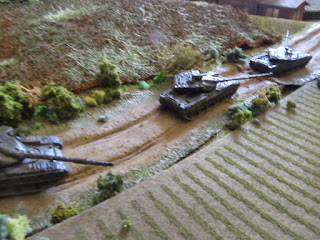 As the first Chieftain troop arrives 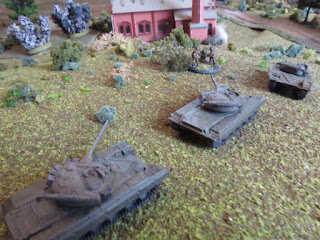 3 T-64s head right behind the recce force, my little diversion. 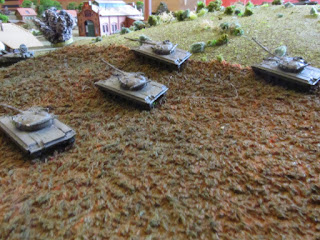 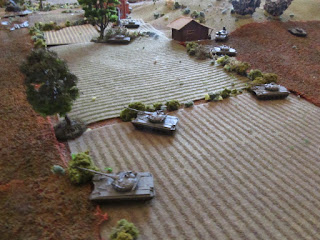 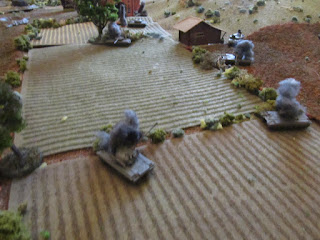 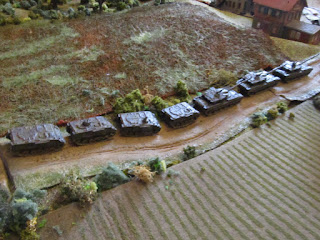 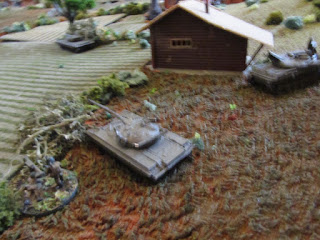 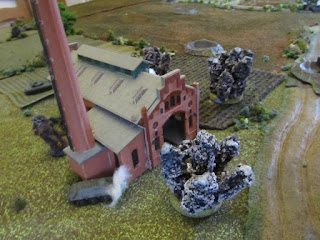 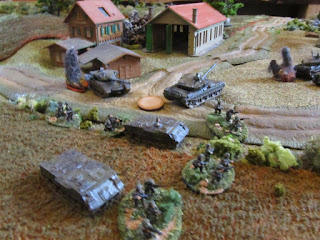 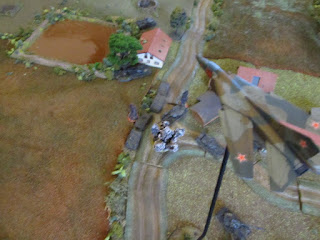 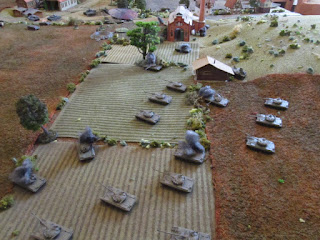 2ns wave of Red armour, passing the despiriting wreckage of the first wave... not a good sign. 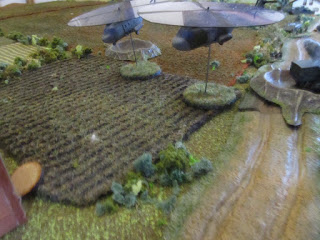 Pumas inbound with aggressive paras onbound, spoiling for a fight. 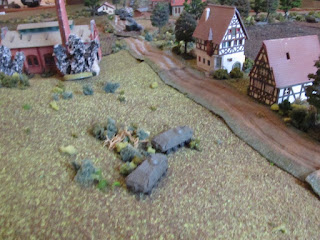 Last infantry reinforcements roll in, too late to help out much 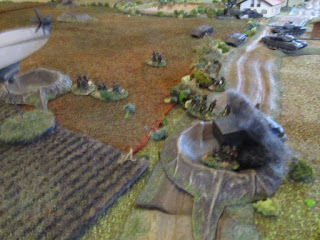 Th British advance beyond the cross road, even the Carly G got a few shots off at BTRs... and missed. 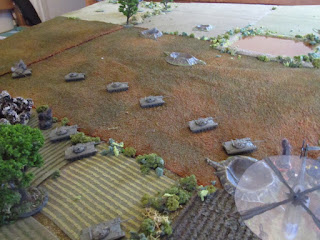 2nd Company press on into the open field, firing as they come 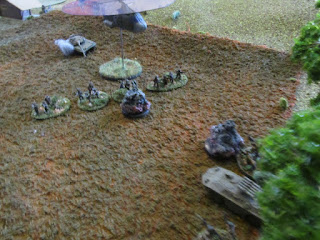