The finale, a meeting engagement scenario as the Germans push for Le Desert and US try to stop them. Tank duels in the bocage wouldn’t be my pick of games, I find, from bitter experience, they bog-down in the hedges with tanks just firing back and forth from across a field, with little real movement. It can become just rolling dice at each other, until one side hits. Anyway, restriction of the theatre aside, time to get some Panthers rolling.

Here is the German Force:

and here is the US.

and the scenario special rules

Soft Ground: Wheeled vehicles which move off-road treat it as Dangerous Terrain. On a 1, roll again. 4+ OK, on a 1-3 Bogged down and immobilised. Half-tracked and tracked vehicles move as normal.

Allied Air Superiority: German player must roll a 6 for any Air Attack counter.

US Reserves: The M4 Shermans are reserves and enter via the US table edge on turn 4+D3.

The Jeep team, M8 Greyhounds and Armoured Infantry are reserves and enter via the US table edge on turn 2+D3.

Flanking Recon: The SdKfz 250/9 and Recon Teams (base or attached) may enter from up to half way along the western board edge.

Supply Truck: After all other units are on the tabletop, both sides may include a single supply truck, entering from their table edge.


Google Earth provided the right location for the battle and I replicated it onto the tabletop, with a minor change (one side lane to Bon Vouloir was enough). 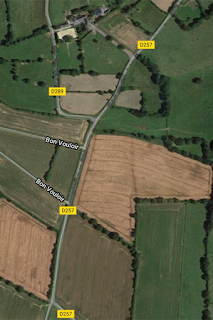 For a plan, I picked a  flank to attack (up the right) with a small diversion force on the left (including the flanking recce units). Hopefully they would draw some US forces away from the main attack and if not, then be enough to sneak 3 AFVs off the US table edge for the extra campaign victory points.

The game started with the initial US forces deployed, up to 3/4 way down the table all infantry in foxholes in the hedges and the two M10s on ambush fire, one covering the road from the back. The Germans would roll in on turn 1. Except, well, 4 orders in the first turn (double 1, first roll of the game, good start!). I kept it simple and sent the tanks in first, defying the M10’s gun to crack Panther front armour. The infantry would follow on turn 2.

The lead M10 found itself alone against 3 Panthers and, clanging one shell off a Panther’s gun mantlet, scooted back across the cornfield rather than lose the uneven fight. The US infantry mostly got on ambush fire and waited.

With a better command roll this time and the Germans advance got underway, pushing up the table, with the panzer grenadiers behind the tanks (as cover in the open crop field), US rifle fire had little effect on them, and the handy Grille arrived to blast the hedgerow with direct HE, but the US remained steady in their foxholes. The Panzer Grenadier Platoon HQ leapt from their 251/10 to get the radio up for mortar support but bursts of .30 cal fire pinned them in the hedge. Mortars would have to wait.

On the left, the solo Panther spent a few turns forcing the bocage and moved up, unopposed with US infantry in foxholes watching it - oh for a bazooka! It’s MG and HE fire would then get them pinned.

The main attack Panthers rolled on, with much questioning by the US commander of just how he was supposed to stop them… with no artillery support available and the M10’s underwhelming gun his best shot. Yep, tough one, maybe switch to HE for suppression? The US bazooka team managed to score a frontal hit and pin one big cat, so that was something! The bazooka team then took off through the cornfield to the woods behind, MG fire whipping past them, but they made it.

On the left, with the US infantry pinned, the flanking scout units arrived along the lane, debussed the 3 man scout team who’s close assault on the foxholes killed 1 American and the rest surrendered, nicely mopped up! ‘Hande Hoch, Yankee!’. The scout team then jumped back into the 250, only for the M10 covering the road to change position to get a LoS, fire and … ouch, hit! Boom, the 250 suddenly vapourised and all 3 guys inside with it, for 2 chits. Rude! That was carnage and the first setback.

Turn 4 and the US Shermans rolled in, 5 off them, deploying to meet the big cat's advance, I was halfway up the table now. Mortars got firing on their hedge-line and pinned the M10 and wiped out the unlucky bazooka team with their only direct hit all game. Counters were mounting, and the draw had not been kind to either of us in a game of find the 4s and 5s.

On the main road, the 251/10 was tweaking the M10s tail and laying down some suppressing HE, which worked, pinning it with pesky 37mm fire. On  the right, both sides now lined the hedges with tanks and infantry for the main event, who can hit first? Predictably, the Panthers started the 75mmL70 execution, KOing 3 Shermans quickly, but irritating US MG and rifles kept my infantry hugging the ground and then the panzer grenadier squad ran out of ammo on the special counter (too much MG-42 fun for them). The ammo truck was behind, so moved up help (and we forgot the wheeled vehicle's bog-down rule).

On the left, with one Sherman blocking the route though, I could get some AFVs off the table, I need three, so sent the 251 and passengers racing that way, as the Panther led the way to deal with that Sherman, but missed. The 250/9 followed. Then, disaster, the Panther took a chance and risked the Shermans ambush fire at close range as it waited for it to come through the gap in the hedge. Over confidence resulted in a 75mmL40 round through the side and a KO’d Panther –second set back. That left the 250/9 and 251/1 facing a Sherman, so, err yep, time to run-off. That sneaky advance was aborted, there would be no getting off the table there. The retreating 250/9 was later hit by the Sherman, its 20mm cannon little use (failing to pin) and also burnt. Recce section eliminated. That Sherman had single-handedly saved the objective on that flank.

The final US reinforcements arrived on turn 7. Two M8 Greyhounds came down the road, one hitting the 251/10 and wrecking it. My counter’s total were now high, at 23. I wasn’t going to risk unpinning anymore, which left my platoon HQ mortar spotters pinned and out of the game. As the 80mm mortar fire on the hedge ended, the Panthers and Sherman and rearmed M10 traded fire, with misses, and my tanks ran low on ammo. One switched to HE and even a HE round was good enough to destroy a Greyhound from the side. The second M8 was KO’d when the panzer grenadier squad leapt from their half-track into the hedges by the road and sent a Panzerfaust the armoured car’s way… Kaboom! Both were now burning in the road and after that counter, the US stopped unpinning too. It was close, the next counter would surely end it.

But, for the next 2 turns, with only a few unpinned units on both sides, we could not force a counter on the other side, deadlock. My Grille pinned his last M10 with a big HE blast… and 1 Panther was pinned by another glancing 75mm Sherman round. Maybe it would end with one side fully pinned down?

Ok, time to break the deadlock and take a risk. I unpinned, drew a 4 (tut) and was on my breakpoint of 27. But at least I could use my units again. The infantry pushed on, into the cornfield heading for the woods on the right, where a Sherman was smoking and 3 US infantry lurked with M1 rifles. Their ambush fire failed to pin (phew) and my men closed in on them. MG fire to pin them, then a close assault to get those three stragglers and end it. Except my MG’s bursts failed. So, to assault or not an unpinned enemy, risky, we could break both squads. Ah, go for it! My veteran panzer grenadiers when into the woods, throwing stick grenades and wiped out those US stragglers. Their return fire killed 2 men, leaving a vital morale check… it was passed - phew! Counter to him, none to me… and after us both sitting on our breakpoints of 3 turns, it was over. The narrowest of German wins.

But, in terms of campaign points, the winning margin was 0, so 0 VPs for the Germans and, as no AFVs escaped off the US table edge, then +5 VPs to the US… for the loss. So the campaign ended with the Germans on 18 VPs, to the US’ 11.

It’s been fun, but time to get out of Normandy and do something else. The Bulge or FotR for the ETO for a bit… but I have a plan for a Tunisia game and the next mini-campaign will be Ostfront, once I complete the revamp of my Russian forces.