May 20th, 1941
On the edge of the village Pirgos, near Maleme airfield, Fallschirmjager (FJ) forces are dropping onto Crete, the invasion has begun! The paratroopers objective (that's me) is to silence a Bofors anti-aircraft gun, part of the airfield’s defences, and clear the area of defenders. The defenders, all New Zealanders, must hold their positions and defeat the paratroopers on the ground.

This was a small play-test game, running through the basics of a new Airborne Assault scenario, which allows games to be played with paratroopers (and those in gliders) landing on the tabletop in a directly opposed landing… a messy business, but a different and fun game. Not many tanks though…

Here are the two battle groups for this ‘platoon’ game. 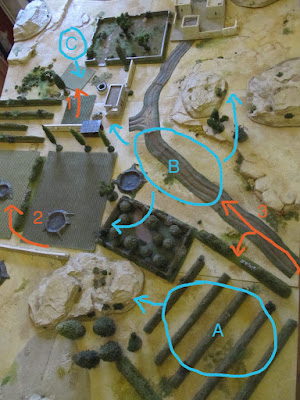 In blue, landing areas and FJ moves. In red, NZ moves. The objective was the small hut in the centre.


Turn One and the action started with the first wave of FJ dropping in and randomly scattering all over the place. The Platoon HQ hit first and, by luck landed right next to one of the objectives (marked by a drop canister) in a vineyard, they immediately came under Ambush Fire from the dug-in Bofors on the hill top, with a commanding view, but the first rounds flew high and missed. It was a good start, that rapid went more pear-shaped. One squad landed fine (but pinned) but their MG team was lost in the drop, hit by ground fire or scattered to the winds… another MG team landed in rocks and the resulting casualties that caused, and also being pinned, meant they were lost too. The platoon’s other squads hit the deck, mostly pinned, and that ended the turn. Some unpinning (finding drop canisters) later, and it was the defending New Zealander’s first go.

They set about inflicting some damage, mostly more pins though as they didn’t have many orders (4), the Bofors gun went onto Ambush Fire again. Dug-in, it as going to hard to take out or get near enough to assault. Two other New Zealand units scurried off to grab the drop canister objectives from where they had randomly fallen. The AT rifle team grabbed one, whilst a Bren Team, detached from a rifle section set off to get the other - all worth counters on the FJ, like normal objectives.

Turn two, and the rest of the FJ dropped in, including the FHQ, into the vineyard, as well, and his air liaison officer, who unfortunately landed in the open about 6” in front of the Bofors gun and was immediately turned into meaty-chunks by 40mm cannon fire. The mortar team and loaders hit the vineyard too but, best of all, the pioneer squad’s drop deviated them right towards the central building (an objective and a fortified building, containing the New Zealander’s Platoon HQ, nice and safe). Well, until the pioneer’s perfect landing left them unpinned, ready to go and with their flamethrower in hand. Eek!, they immediately rushed up to the building and gave the PHQ a whiff of hot flammenwerfer, wiping them out, and costing 3 counters(!): unit destroyed, under flamethrower attack, captured objective (even if it was now rather scorched). The FJ were back in the game after the initial counters had seen them rapidly race up to 16 BR lost, with the New Zealanders only on 3 (from being out scouted and one objective grabbed).

The third FJ MG team was wiped out by rifle fire, leaving me very ‘MG light’, but a lack of orders meant that the NZ observer team in their dug-out couldn’t call in the off-table 75mm rounds this turn, a small mercy for the struggling paratroops. As well as that break, none of the defender's reinforcements arrived this turn.

Turn 3, and the FJ were all down now, but mostly pinned. They did what they could, the mortar team was ready to go, but the PHQ failed the required comms test, even with a re-roll for the comms relay-team, now set-up in the vineyard that, by default, had become the command post. The pioneers took the fortified building (3+ covers save, yeah!) and shot up the rifle section in the field outside, pinning them down. The pioneers were winning this single-handed it seemed. Their squad MG also got into the action and added some extra pinning too, game on.

In the New Zealander’s turn, well, the scampering 2-man Bren team grabbed a drop canister and the Bofors opened up again, hosing down that vineyard where the FJ kept landing, and luckily killing one of the FHQ with its suppressing fire. Also, reinforcements arrived, the Vickers MkVI clattered up the lane, with a Bren Carrier team behind -  Actung Panzer! My FJ had almost nothing to fight that with, except  suppressing fire at close range and hope it broke down (it didn't). The Vickers sprayed a lot of MG rounds but managed to pin nothing… the Bren team behind de-bussed and headed into the vineyard, to see what they could mop up, and managed to kill one man from the comms relay team, but his surviving mate wasn’t pinned and would fight back.

The BR count looked bad for the FJ, but this turn the pioneers wiped out the squad outside with two aimed fire shots which massacred the poor NZ guys pinned in the open at short range. The PHQ also took a drop canister objective as well, and the the two snipers managed to keep some enemy heads down too, all good. The paratroops also got the mortar into action for the first time, spotted for by the PHQ, they tried to hit the Bofors gun, but failed to pin it, even with the help of their loader team's extra shot. The sMG-34 team then pinned the Vickers light tank, bullets ricocheting everywhere, but it was the best they could do to stop it. Unpinning, the FJ were now at 25 from 28 BR, but the counter was an Air Attack, hurrah, the Luftwaffe, except my Air Liaison Officer was very dead and my roll failed, no show from my Stuka… drat! The counters inflicted on the enemy made it closer again though, and both sides where furiously doing the maths, checking their counter stacks.

New Zealander’s go, and finally they had enough orders to try and fire their artillery, and got through on the radio, and avoid the counter battery air strike (damn, the Luftwaffe was failing me today). The 75mm shells plunged in and did, well, not much - phew! 1 pinned unit in the orchard was it, well worth waiting for (and cost 3 orders). Oh well, the fire fight continued, the Vickers HMG fire pinned the heroic pioneers in the fortified building, but that was about it. The Vickers light tank was pinned on the road (and now just 2 BR points from breaking, it wasn’t going to get unpinned anytime soon), and the carrier team in the vineyard failed to spot the last FJ signals man, hiding under the vines twice, a lucky break. It was so close, but that Bofors was back on ambush fire, looking menacing.

German turn, and they had big problems, they were also just 3 BR points from breaking. Their orders also deserted them and, with so few, I tried to cause a counter or two - somewhere! Anywhere! But, the mortar failed to hit or pin the Bofors again (dug-in, very tough). It then returned fire, luckily spotted and then hit the FJ FHQ calling in that mortar fire, and killed them all (well, both). 2 counters for a lost senior officer… and game over. The FJ had lost, but it was very, very tight in the end. If only that Stuka had shown up.

The scenario was great, some tweaks needed, so it was not quiet so harsh on the attackers as they land, and to make gliders look a bit more attractive as a way of getting onto the tabletop. Also, I'm not sure the defender’s reinforcements will show up fast enough to take part in the battle, but overall the balance was good. The FJ lost a lot of BR (and units) at the very start, but they have sky high BR totals as veteran and elite infantry. The defenders lower BR total meant that once in the fight, they looked very dodgey. The horror of the flamethrower attack cost them dear (11 BR out of 19 lost in all). The Vickers light tank was frightening, not often you can say that, but on this table it felt like a Tiger tank…

Here are some shots of the game in progress.

Crete army lists and airborne assault scenario will form part of the next BG book ‘Tobruk’ for North Africa (and Crete) in 1940-41. The airborne assault makes for a very different battle and has a chaotic feel from the desert tank fights, and I really like that. Next time, some glider landings too I think… best paint a DFS-230. Hmm, who makes one...? 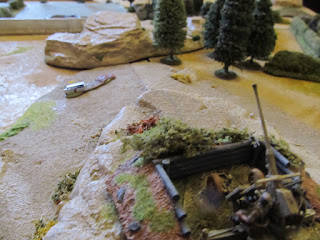 The mighty Bofors, in its dug-out. In front, a drop canister objective marker has randomly fallen. A detached Bren team ran over and grabbed it. 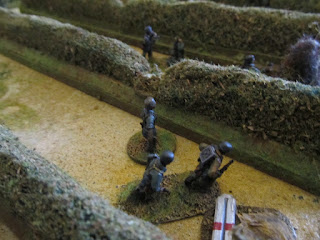 PHQ hit the vineyard and another drop canister objective. 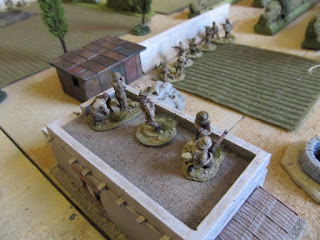 Defenders become alert, PHQ in the central objective, unaware of a fire fate awaiting them. 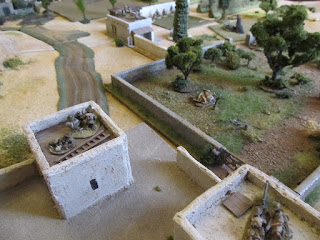 Vickers HMG team and AT Rifle team on the edge of Pirgos. 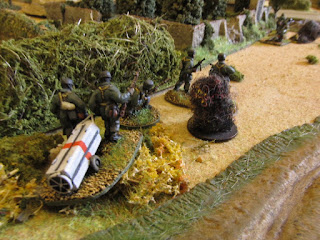 Landing in the lane, pinned, then diving into the walled orchard for cover. 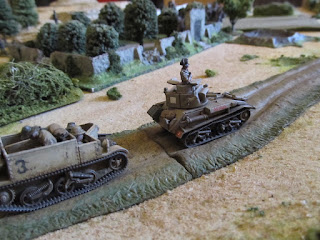 Up that same lane comes reinforcements - serious armour(!). Well, on this table, it is. 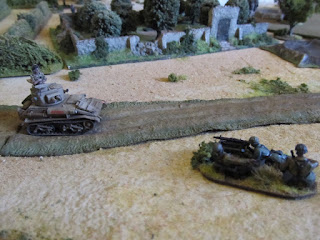 The Vickers MkVI gets pinned down by the HMG-34 team blazing away at it, from about 4" away. 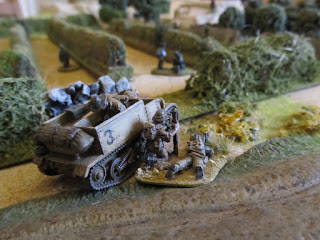 Meanwhile, the Bren carrier team de-buss to investigate the vineyard. 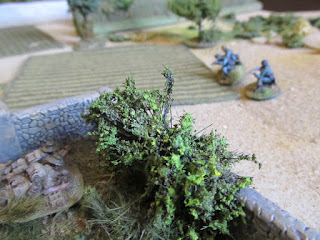 Across the table, 3 last survivors of second squad shoot it out with a 2-man 2" mortar team, that ditched the mortar in favour of their rifles. 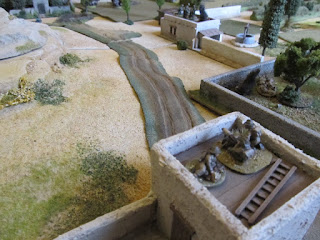 The Vickers team hosing down the objective building and pioneers, pining them down. Nothing dared come up that lane... 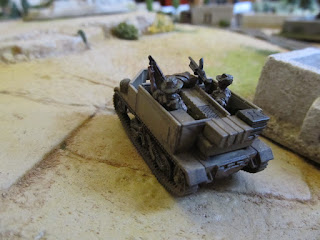 Last reinforcements arrive from Pirgos, another carrier team, but too late to get involved. They can just help mop up the surrendering paratroops.