This was a 750 pt Fall of the Reich playtest, utilising many of the special rules, and the army lists for the 1945 supplement, with the US attacking through the streets of Koblenz against its German defenders. I won't go into detail of the special rules used, suffice to say it included a new counter set.

The board contained 4 objectives; the central bank building, the large hotel overlooking the square, and two buildings on the American side of the main road across the board. One building (randomly determined) was designated as a hospital, and as such neither side could enter the building. The US attacking force was an infantry platoon supported by a Pershing tank platoon, an M36 Jackson, a battery of 3 Priests, and a veteran armoured infantry squad (who turned out to be war-weary at thus reticent to get stuck in).

The German garrison was a veteran SS platoon, supported by a auxiliary platoon of armed local railway workers, a Hetzer, a Wirbelwind and a King Tiger. Both sides had forward headquarters, a supply truck, OP teams and some off table timed barrages.

I won't go into a full blow by blow report, just a quick overview with some snaps. The American attack would be split in two, with the infantry platoon split on the left and right, and supported by a Pershing each, to converge on the bank 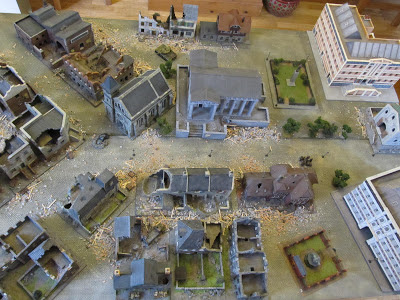 The rubble strewn streets, bank in the centre next to the church. US attacking from the bottom, Germans defending the top table edge. 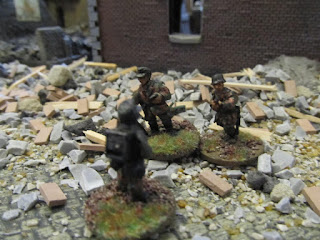 Herr Oberst, the Americans are coming! German forward HQ deploy their defenders in the rubble. 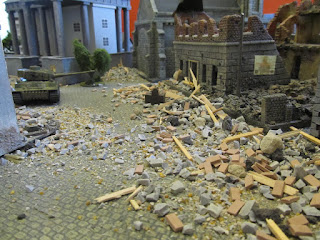 Tiger I abandoned in the rubble. 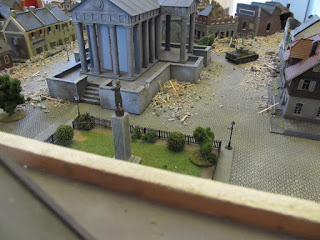 View across the platz to the bank, from the hotel roof. 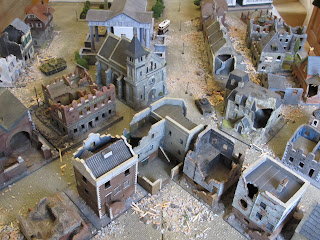 The opposite end, including the church tower, soon to be occupied by a HMG-42 and loader team which would dominate the surrounding streets with hails of plunging fire. 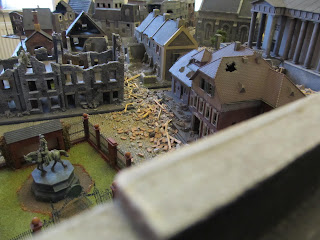 The hospital building and, later, the scene of heavy close combat, a small park. 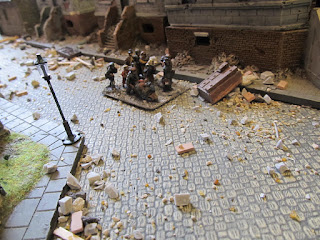 Refugees, a scenario special rule. They had to make their way off the German table edge.
They eventually did it. 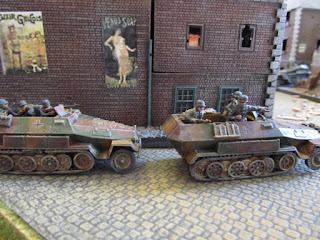 SS Grenadiers arriving. Their half tracks lurked out of harms way, then withdrew off the table when a bazooka team came close. 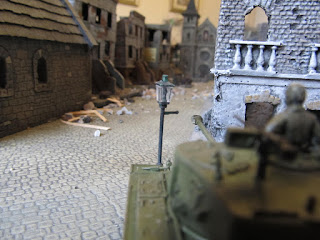 Pershing noses forward to bring the King Tiger in front of the church in sight. It exchanged fire down the road for several turns, and was then hit and destroyed by 'the Beast'. From the roof top, US troops see the M36 Jackson destroy the dangerous Wirbelwind with its first shot, woo-hoo! 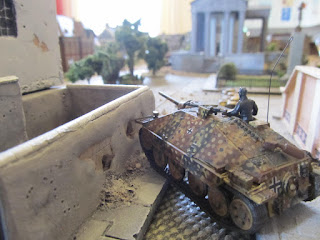 But the Hetzer lurks closeby on ambush fire. 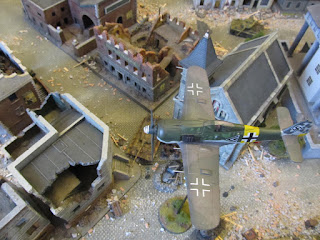 Turn 2 and the Luftwaffe appear... a FW-190, which dropped its bombs with wild abandon, and missed everything. Rooky pilot. Later strafing runs also missed! 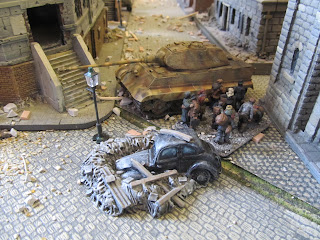 The refugees attempted to escape passed the King Tiger, dominating the road junction. 155mm artillery fire soon pinned them, and it. 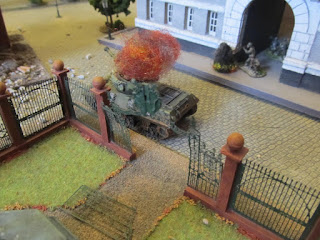 A German 105mm timed barrage hits the Jackson and knocks it out, pinning US infantry too. 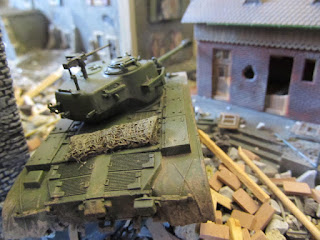 The second Pershing crunches forward to bring the bank under fire with HE and MGs, pinning down the SS within. 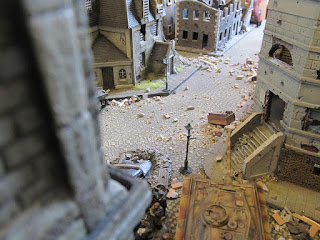 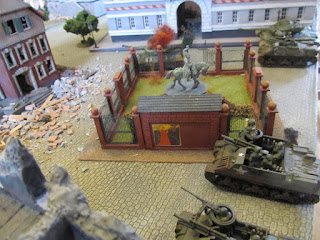 US artillery arrives, and laid down repeated barrages. The third Pershing is also arriving from reserve. 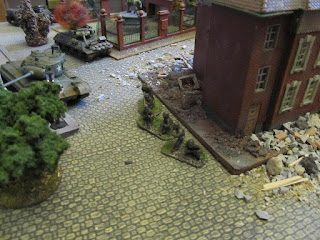 US attack beginning, passed the hospital, in an awkward place. Despite a lot of pinned Germans, they managed enough fire to drive the attack backwards. 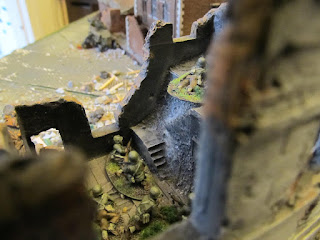 US infantry under fire from a sneaky 250/1. They would soon press forwards with their attack and deal with the menace. 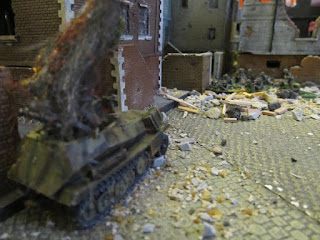 Bazooka hit, no more half track! 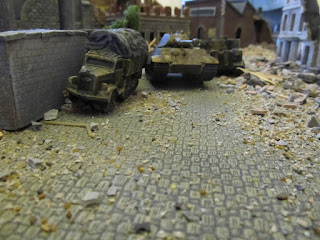 Tiger on the move, first a stop off at the resupply truck behind the bank, before moving to engage the other Pershings. 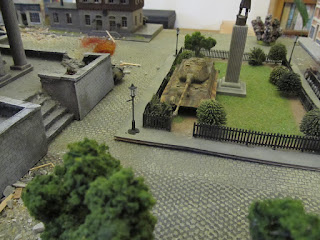 Taking up firing position in the park, and lining up a second Pershing, which it immobilised, then destroyed.  2-0 Tiger. A 222 is burning after an earlier 155 artillery strike. 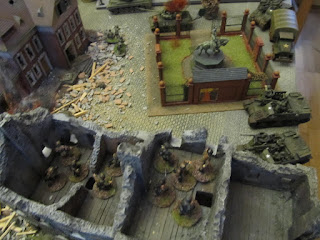 The German counter-attack, utilising their auxiliary platoon led by an SS squad, arrived via the sewers in a building on the US table edge. Suddenly, the park was swept by small arms fire and panzerfausts. It was close combat, and HE fire returned by the M7s saw their ammo bins emptied. Note the US resupply truck risking the maelstrom. The surprise attack turned the game in the German favour, as up until then the US had been just ahead (mainly thanks to some accurate artillery fire and a lot of pinning). 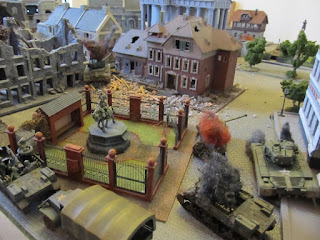 Burning wrecks around the park, leaving the US force close to breaking. 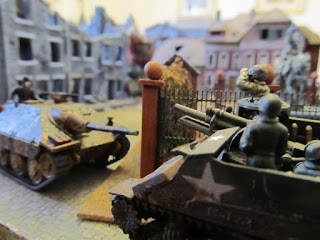 Close encounter. The Hetzer makes sure of the kill, knowing the M7 had no ammo it just rolled up a popped a roudn through the M7. The Hetzer's own last shot finished off the US artillery.

The US had lost, reaching their break point of 47, with the Germans on 34 out of 37... so close. 1 more counter could have chnaged the outcome. The defenders of this area of Koblenz had put up a great struggle, and weathered vicious US shelling. The King Tiger helped a lot, as did the subterriannean deployment of the infantry, tooled up with panzerfausts. It caught the US unwares and snatched a victory went it looked like defeat. Still, a great game and very characterful. The cityscape made for a tough fight, with lines of fire so limited, next time, back to the open Russian steppes I think...