The final battle of the Longstreet campaign, 1865, and the Rebs are about to make their last stand. The scenario chosen for the game was the farmhouse, simply because we had not yet played this one in the campaign so far. The Union would be attacking again, as only seemed fit for a fight at the very end of the war.

My brigade would have to take the fancy ‘big house’, surrounded by ripe cornfields and woodlands, now crawling with desperate Rebs.

As the Reb brigade deployed, I made my plan of attack. Firstly, in the open ground on my right, with most of his artillery guns deployed to cover it, it was invitation to an artillery duel. I would face off his 5 guns with 6 of my own, mostly heavy rifles, the grand battery!. His ‘artillery officer’ would give him an edge, but I had more guns, longer range and more good artillery firing cards in my deck than his.

The main assault would be up the centre, the shortest route, through the woods to take the walled cornfields. That would costly in cards, but not slow me down, and my ‘eager’ coloured regiments would lead the way, supported by the veteran New York Irish and, on their left, my fresh new recruits, 5 infantry regiments in all. One artillery battery would help shoot them in through a gap in the tree up the road to the house.

On the left, very little, a small cavalry feint, deployed in column, so very fast, and these he could not ignore, as otherwise they whip around the flank and be on the objective (just behind the house). They hopefully draw some men away from the direct route to the courthouse.

My own reserve was another cavalry unit, the larger one, in column, ready to move right, left or redeploy up the centre if that attack was needed reinforcing, otherwise, again, a fast ride for the objective once those Reb guns had been blasted cleared from the right.

Game on! We drew cards and boom!, all my cannon’s opened up.

The artillery duel was decisive, over 3-4 turns my heavy guns smashed his to bits, he lost all 5 to yankee guns, and inflicted, well, no losses in return. An unhappy state of affairs for the South as Northern guns dominated (with some better dice rolls too, I should add). His artillery officer, well, he’s been a bit useless all campaign! His turn not to able a 4+ for a kill dice.

In the centre I made my advance, through the trees, with skirmish fire from the Irish boys proving effective due to my commander’s ‘Scout’ biography card - risky but worth it to fire at him when he can’t shoot back. But when it came to the grand charge!, even my eager boys, outnumbering the Rebs, couldn’t force the wall. It was close, but I lost out in two charges and fell back into the trees again, to continue the skirmish firing exchange. Damn, those Reb vets were tough behind their wall, literally like a stonewall! Still, I had numbers and settled instead for a firing duel I thought I could win by attrition. Not much glory here, a slogging match. No triumphant procession to victory, we’d have to work hard to shift them.

On the left, well, the cavalry advanced and loitered, threatening to make their flank run, and the Rebs facing them dug-in. Good, they were not going anywhere.

I’d had the best of the start of the battle as we broke from lunch.

Post tea and butty, I had to redeploy my guns now, with no targets left, so they all limbered up, as, with a clear run, I sent my cavalry reserve quickly round to the right, looking to get behind the courthouse and take the objective, that would seal the win. Unfortunately, the Rebs had reinforcements off-table, and they arrived, his own cavalry and a few scrappy small infantry units, the very dregs of the south. His cavalry came to face down mine on the right… so I quickly redeployed the heavy guns, a fresh target. Seeing this, his cavalry withdrew behind the house again… wise move, as my heavy guns would most likely have gutted his small cavalry unit. That allowed my cavalry to deploy into line and advance on him. On the left, with a useful ‘quickstep’ card, my other cavalry unit began their run, simple to draw men and fire away from the right hook. Like lightning they were behind him, and the objective was threatened. His cavalry dismounted and formed on it to hold it. He was looking surrounded.

Back at the courthouse’s cornfields, I tried another advance, charged again and this time pushed one of his units off the wall and back into the corn. The ring was shrinking.

The end was nye for the Confederacy, his position all but hopeless as my artillery redeployed into new positions and opened up again, with nothing to stop them and no return fire. The pummeling began… My cavalry charged his dismounted men on the objective but, in another close fight were repelled - drat! No winning it with a glorious cavalry action… but it didn’t matter, the artillery was crushing him and, as losses mounted with no comeback, he struck his colours… the war was over… the campaign was over… it ended with a Union victory at Abelard Courthouse.

In all, its been great fun, as each LS campaign is. Love it. The final tally in Epic points - Union 49, Rebs 28, with overall, 5 Union wins to 3 Reb wins, and one draw (very marginal Reb win). My boys in blue had done me proud. That’s it for ACW for a while.

Back to Battlegroup for few WW2 games next. We have decided to play one early-war, one mid-war and one late-war game, to give all our models a run out. First up, early-war desert (Tobruk), then mid-war ostfront (Kursk) and late war western front (FotR). After that, who knows, maybe Soldiers of Rome. 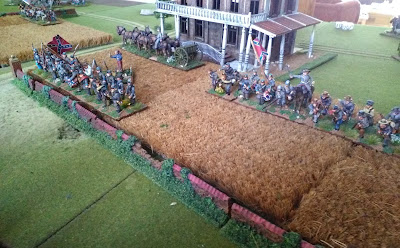 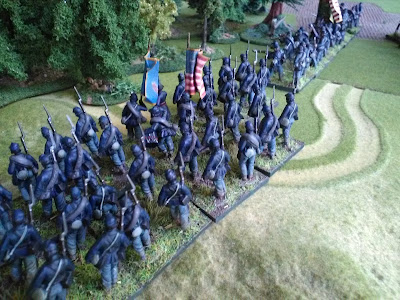 Union forever! The main assault regiments, screened by trees before marching up in a direct frontal assault. Confidence in numbers (and 'Eager' coloured recruits). 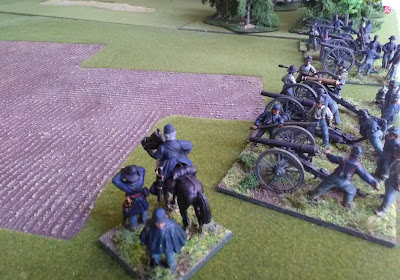 The grand battery, about to blast the Reb artillery to wreckage, a big factor later in the game. 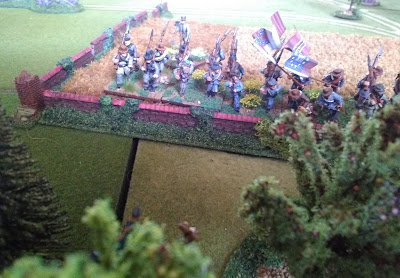 Last of the Reb veterans, behind their wall. Hanging tough til the end, but it is nye... 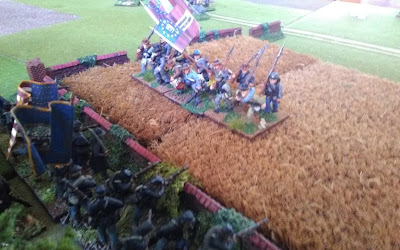 Second time luck, my recruits force him off the wall, but they just fell back through the corn, resulting in new skirmish fire exchange, indecisive for both sides. 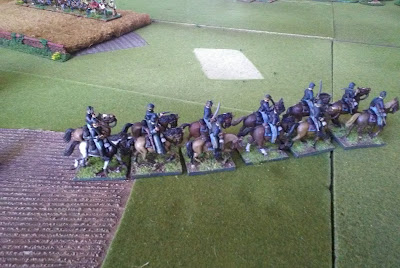 Move out! The cavalry begin their right flank match in column, earlier this would have been suicide in front of the southern artillery. Now, its a clear run round to get behind the courthouse. 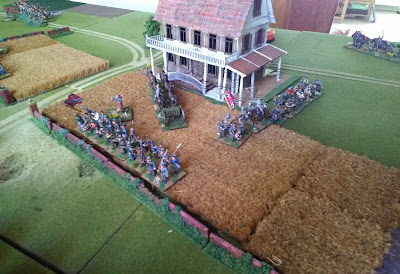 Surrounded, the hard-pressed Rebs are starting to face left right and centre. 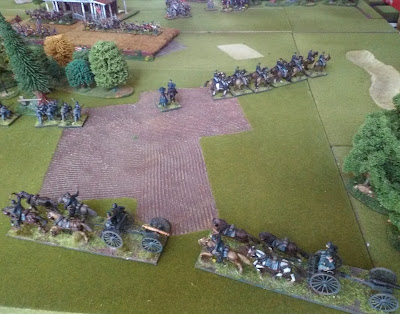 Redeploying the guns of the grand battery, no targets left over here. The cavalry can take over and do their thing now.