A late play-test with the Pacific rules, whilst over in Ireland, in a 800 point multi-player game, 3 of us commanding the IJA (one as overall commander and support - like mortars etc, two as platoon commanders with a platoon plus attached support). The USMC, defending the ridge above Harakiri Gulch where a reinforced infantry platoon with good support in tanks and off-table 4.7” naval artillery fire, along with their own MGs, mortars, etc. They were dug-in in trenches and pits on the ridge, with 4 objectives, one in the centre on the road and three along the ridge top (left, right and centre).

As the Japanese commander it was my plan, with an attack on the right flank and a demonstration attack on our left with the recce tankettes, just to keep the Marines there occupied and slow any reinforcements moving to the assault location. The first platoon would lead, with second platoon following 2 turns behind as the second wave!. Unlucky first wave… they would face the ambush fire of the Marines on that hilltop and their destroyer’s barrages.

Having agreed the plan, we bowed respectfully, donned our harakiri headbands (improvised on the spot from pillow cases and lego) and made for the battlefield to do our duty for the Emperor.

The US Marines had deployed in defences first, with their tanks all in reserve. We played across the table, dragged our few guns and mortars into place and send the scout tankettes scooting through the bushes to be seen and launch the first suppressing fire at long range. It worked well, incoming naval artillery met our first advance, pinning a MMG team, but little else. Our mortars did, err - very little to those Marines in reinforced cover, even when hitting our PRTP. We really lacked anything with a big enough blast that could hurt the dug-in troops.

So the game developed, slowly at first. The Japanese moving up to their jump-off point, the road, in good(ish) order. Behind, the second platoon swarmed over the hill in centre, as my mortars continued to harass the hilltops with their sporadic fire. The USMC awaited the approaching IJA to emerge from the jungles below, all on ambush fire except the naval shore fire control team calling in the bombardments.

It wasn’t until turn 5 or 6 that things seriously kicked off, the Japanese facing the wrath of the US guns and getting pinned, or killed, in serious numbers. Our single Ha-Go light tank was KO’d by an artillery hit (not a shot fired again), but my tankettes were proving a pain at ranges the Marines couldn’t currently match. They did send a flamethrower team sneaking forwards to catch one Type 97, but the team failed to spot the tankette and was wiped out by returning MG fire next turn… one tankette was lost to accurate mortar fire from their single 81mm on the centre hill in its mortar pit. By now, on the US left, the squad was worried, the weight of the assault was coming their way. The US tanks spread out along the ridge line, 1 Sherman and 1 Stuart behind each trench line. One Sherman came down to held secure the centre objectives and see up the road, only to be hit by a Japanese booby-trap (special counter) and start to burn! Win! My tankettes traded pining shots at long range in the ‘plinking battle’, that would result in, well, zippo, for almost all game. They were doing their job though.

The crux of the battle would the hilltop assault as two Japanese platoons tried to force their way up and onwards, and casualties mounted, and many, many 3+ covers saves were passed by the Marines (but not all), slowly their ambush fire was used and they became pinned. This was our chance. Second platoon had also now arrived and took over the lead, tank hunter teams sneaking through the trees forced the US Marines comms relay team to pick up their M1 carbine and hunt them down… the first Japanese assault was repulsed as they used Fallback! to avoid heavy losses from tank MGs on ambush fire. It seems impossible to break the USMC lines, but our infantry was closer now, too close to risk those repeated 4.7” barrages.The Marines were being whittled away. Good!

In the end , the Japanese assault, repeated close assaults by our veteran ‘assault troops’ broke the line, but reinforcement Marines were arriving, shifting left from he centre, which was mostly quiet except for incoming mortars. They fought off the assault, wiped out the Japanese and got back into the trenches. The Sherman (a Zippo) rolled forwards to get into flamethrower range, hoping to immolate a pinned Japanese squad. But then I used my hidden suicide AT teams, emerging from spider holes all 3 charged the tank, 2 being killed incoming, but 1 made it and kaboom, his lunge mine destroyed the Zippo in a fireball. The US Marines were desperate now, the line was buckling and their BR total (36) was looming large, the Japanese started with 65, but had plenty to go. But they would need it as costly assaults continued. One after another the Marines fire teams found themselves at close quarters and whittled away. One single Japanese soldiers assault once, then again on a Beyond the Call of Duty test, killed 5 Marines single handed with his grenades, before being BAR’d down in turn. The bodies were really piling up.

So was our BR though, now raced up to 60, I triggered the Banzai special rule (we had a chit for this, which you need). All our remaining infantry, light mortar crews etc, charged… again! and the US looked very doomed. But a .30 cal MMG team arrived to help and set-up, it cut a swathe, as did the Stuart’s two MGs. They needed to unpin, risking taking a counter and getting a special counter instead. Lucky Uncle Sam!

In the end, the IJA broke first, a last counter for another wiped out close assaulting squad pushing us to 67… we had lost. The US Marines total was, 36, bang on their total (and I double checked it!). That last special counter had saved them. The lines had held, it had been carnage on the Japanese, not much was left standing… a few HQ squads and AT teams… 1 tankette… a 47mm AT gun and loader team. Harakiri Gulch had lived up to its name. In all, a great game, well played by all, and a desperate defence that held, just held, but oh so close…

I managed to take a few (bad) pictures in the excitement, but fellow banzai-commander Diego took far more, and his excellent report is on his blog… which I'll link too when it's up.

Pacific is shaping up well… very happy with that game. 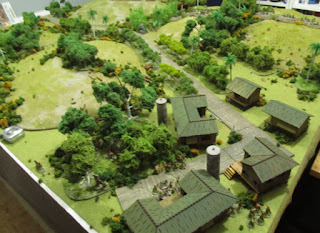 The table. Japanese 1st platoon moving through the village to jump off up the hill beyond the road, the scene of carnage later in the game. 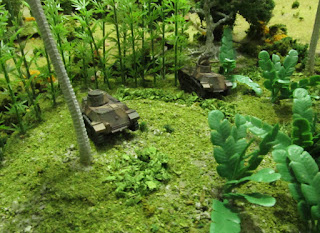 The demonstration force' of recce tankettes make through the jungle scrub on the other flank. 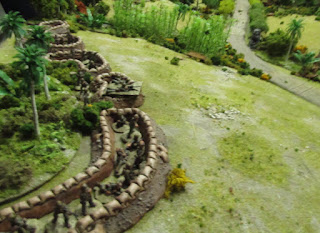 Opposite them, the right flank of the Marine defence lines and trenches. With the open ground ahead of them, we considered and discarded the idea of a main attack here. 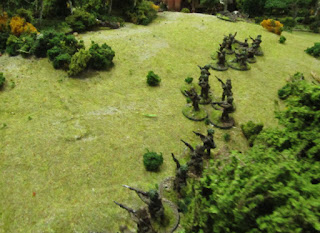 Japanese 2nd platoon arrive and swarm up over the centre hill.  Their second wave attack was to be in the centre, but they attacked the wrong hill! Instead mingling with 1st platoon on our right. A characterful bit of misreading of the plan. Still, it almost worked. 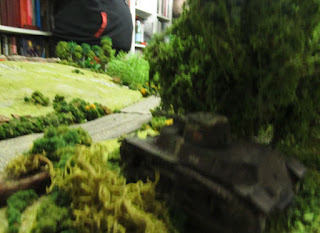 Plinking away, a tankette harasses a Stuart and Sherman from its cover.  I couldn't pin, they could hit... stalemate, so I'll take that. 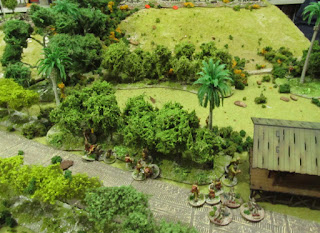 The jump-off for the assault up the hill on the USMCs left. 1st Platoon just awaited a turn with good orders roll and charged! Drawing the ambush fire was painful but necessary to get the others a free run. Useful here were 2 spider holes with hidden LMG teams, which popped up in the jungles to lend their suppressing fire support.