Another Soldiers of Napoleon play test game, a few adjustments from last time, and this battle would see my French force facing a Spanish army. In this ‘medium’ sized game, both commanded four brigades, three deployed and one in reserve. My three brigades were a Provincial Infantry brigade on the left, screened ahead of them by a light cavalry brigade of a hussar and chasseurs-a-cheval regiment (and a horse artillery battery). The right was a brigade of Poles and German troops, better infantry and they would be my main strike force. In reserve, marching up, were another weak provincial infantry brigade - the last scraping of the baggage guard and malingerers. I wasn’t expecting anything of them.

The arrayed Spanish were an regular infantry brigade, screened by their light cavalry brigade of a composite hussar regiment (various squadrons thrown together) and another ad hoc unit of lancers. They had the Spanish right. On their left was a militia brigade, of local militia’s and a unit of guerrillas, backed up by a single provincial grenadier battalion to stiffen them.

Having deployed, the Spanish’s orders were to defend, and hold their lines. The French would be in all-out attack. That attack would see a diversion on the left with the provincial troops, to draw in and pin his better forces their, for the main assault on my right (his left) by the Polish legion against his militia, sweeping them from the field should see me win the day - well, that was plan.

The game started with the light cavalry all in action, facing off, both deployed their light guns and opened the cannonade. The Spanish guns were in furious action, rapid and accurate - ouch!, and my chasseurs took the brunt of it, recoiling backwards in disorder. My hussars, regardless, went boldly forwards and launched a fierce charge at his hussars, driving them back in disorder. His lancers came forwards to counter, and found the French 1st Hussars a tough outfit, as they too were driven off, then pursued and routed from the field… the French were getting ahead in the early light cavalry dueling. But those Spanish guns had started very well, destroying my German battery as well as sending the chasseurs back, but they were now rallying though, as were his hussars.

With his cavalry neutralized, I sent out with my ‘demonstration’ attack, the provincial infantry marching in column for his lines, as his skirmishers came forwards and started the sniping. I’d was a bit slow to get my voltigeurs out and took some losses… poor command that. The lesson is, to stop their skirmishers, send yours.  His skirmishers were also harassing my hussars, who responded by sending a squadron out to attack them which saw most scampering back to the main bodies and safety. One role for light cavalry in the rules is to drive in enemy infantry skirmishers, which is special ‘attack’ for light cavalry only. In the meantime, his ragged hussars were back for another go and round two of the cavalry melees followed as the two hussars regiments duked it out with sabres and pistols. The French won again, but they were in ragged order now, exhausted from the hectic start. They did force his horse battery gunners to run for it though. The chasseurs came forwards to help and were again driven-off by cannon fire… damn them! The 1st Hussars were left to fight it out alone.

The Spanish reserve brigade now turned up, 2 dragoon regiments rode in and quickly launched themselves forwards, overrunning my battered hussars and then their supporting horse battery. The Spanish cavalry counter-attack on their left had some of my infantry forming square and the ‘demonstration’ attack came to halt and ended in exchanges of skirmisher fire at range.

Time for the main assault, with his reserves committed, the Poles and Germans rushed in column at the so far inactive militia and the action switched to my right flank. Through shot and shell the four columns came on and the veteran Poles charges home, a la Bayonet! The militia broke and ran before the assault, and his grenadiers came forwards to block the rout. It was hectic… multiple melees, but the French were winning. On his right, the Regimento del Rey dragoons was trying to break an infantry square and failing, but the square was very shaky and failed to rally well. Harassed by his best dragoons, the provincial infantry would not hold out too much longer.

It was very close on victory points, in fact too close. By the end of turn 7, both sides had broken… the Spanish army was now at -1 morale, the French at -2… a bloody draw on the flood plain of the Rio-Pequano.

It was great fun, a cracking fight, lots of action. The Spanish stood up well, (except predictably the militias), but they were faced by some veteran infantry (my best). His cavalry counter-attack had me on the ropes on my left with little left to respond. In all, it took 4.5 hours, which for big(ish) game isn’t too bad, but I’d like it to be quicker and will work on ways to speed up game play. There were lots of tough choices to make, which adds to the ‘ponder time’ - should I rally hear or press the attack here, fire the artillery or send out skirmishers, etc. You can’t do it all at once. … which I enjoy in a game. It is tough to command perfectly and you can’t get it right all the time. The cards can sometimes be kind, and others times, well, not so much. Need a card to rally shaken militia - good luck with that! In this game with Spanish started with 3 ‘Intense cannonade’ special events and hammered my lines, but then, characterfully, his main foot battery was low on ammo, so became far less effective.

Here a few pictures of the afternoon’s action. Very happy with the progress of the rules so far. 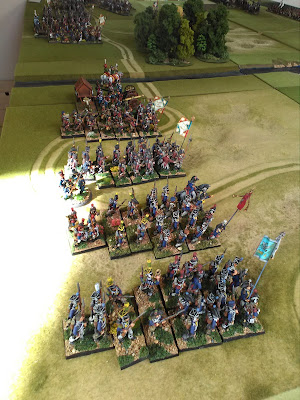 The Spanish sun shining on the Vistula legion's columns, ready to attack on my right. They'd have to wait sometime before the order to go arrived. 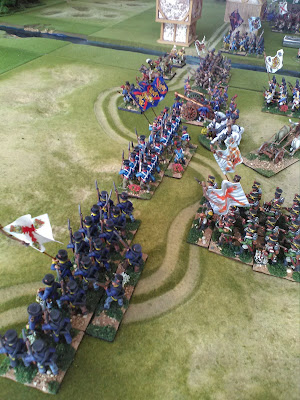 Facing them, the Spanish militia brigade, aided by some guerilla bands and a grenadier battalion. 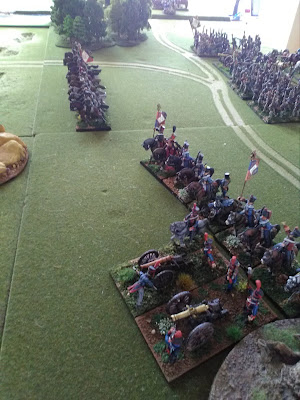 My right, light cavalry and their horse artillery battery out front of the infantry columns. 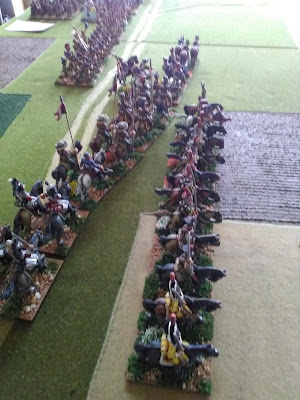 Facing the Spanish equivalent, hussars in front of lancers, their small battery started on limber. 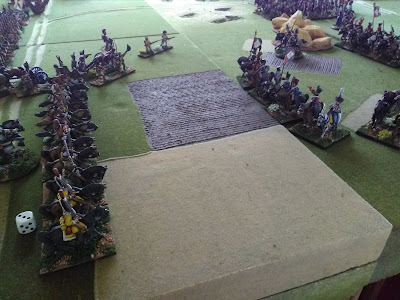 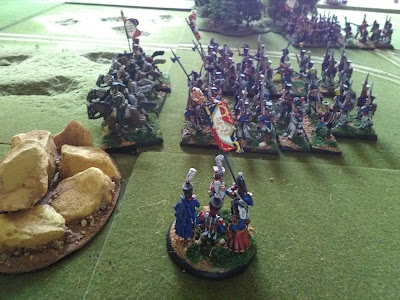 The diversionary attack set's off across the table. A grand sight. My chasseurs have rallied and returned to lead them in. 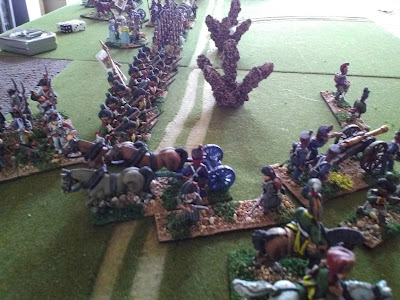 The Spanish left under heavy cannon fire as the French 'come on in the same old way'. 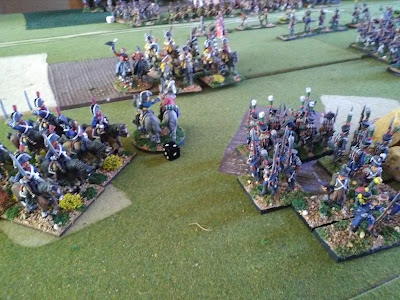 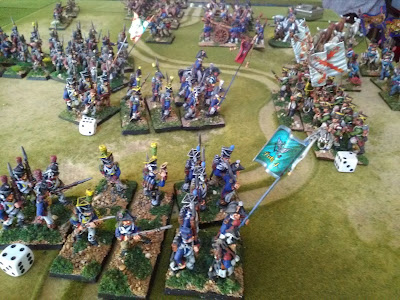 Forward the Vistula legion! Dice show disruption, it's building up.
But veteran troop's main advantage is they rally far better than militia.