A long time ago, in a galaxy (not) far, far away, there was game called Laserburn… this has a very similar premise, a new take on space-opera skirmish gaming. Having just played through my first game of the new ‘Rogue Stars’ game, I thought I’d write down my thoughts in a mini-review.

Our game scenario was an attack by my mercenary squad, breaking into a spaceship to steal some of its high-tech cargo from its security detachment of ‘Star Cops’. It all took place inside the ship, represented on floor plans. 1 floor plan square equaled 1” in game terms.

The book itself is in the now established ‘Osprey-style’, nothing very flash from a graphic design POV, rather small font size and a lot white space’ left, which makes me think these books are written to fit a set format, which in itself can be limiting. It feels lightweight, no real meat on this bone, just the rules and a short (one page) on the campaign rules. The artwork is nice in a cartoony style, I’m more a ‘gritty reality’ man myself, but each is just an image of single character, so not much for establishing a look or feel for the universe. There is no background at all, its just generic ‘far future’ space opera, which is fine, players can create their own, or just use a ready made one from Star Wars, Star Trek, Buck Rodgers, 40K, whatever they fancy and floats their boat.

The miniature photography is rather uninspiring, nothing here in the way of eye-candy, nothing to get the creative juices flowing or inspire a player to do something cool themselves. Each picture is almost the same, 3-4 miniatures on a bit of generic sci-fi terrain. The same miniatures reappear often. Meh! I’d like to have seen something that got me really wanting to play ‘games like that!’. These photos add very little and just fill some space.

On to the rules then. Well, the game scores well for its activation/turn system. That stood out as the best part of the game, acting, reacting and passing the initiative back and forth. It feels like you can you do a lot with a little, if the dice favour you, and that there is a nice ‘to and fro’, both sides are always very involved in the game. There is never a predictable pattern forming of who will get to do what when. This kept both the players thinking, planning and re-planning throughout as the game progressed. I enjoyed that.

The downside, well sadly, is the rest of the rules. The shooting combat I found very dull, and this should really be the heart of the game, laser-blasts flying. Its a D20 system, and the problem is that a D20 allows a lot (too much) of detail and flexibility. The long list of ‘to-hit’ modifiers had my eyes rolling - 24 in all! More that 3 or 4 modifiers don’t stick in the head, so you have to look it up each time. -1 on a D20 is a tempting prospect for games designer, the lovely detail it includes, but makes such little difference and slows the games down a lot. Rogue Stars has fallen into this pit trap.

Second big negative point for me was all the counters. It’s a skirmish game, so with just 5 men to control each, you can have some bookkeeping, but here the counters stack up to crazy levels. Stress markers, Pinned markers, Wound markers, and then other types of wound marker too, Staggered, Lightly Wounded, etc, it all made for a messy table and felt inelegant. At one point the stack of Pinned counters on one of my mercenaries was as tall as the model itself. All these counters have -1 effects in various places and need tracking, which is slow and fussy.

The final part of the game is the squad creation system. Again, it feels very light weight and a bit ‘tacked on’, but the detailed required for each character, their abilities, arms and armour, makes it a lengthy process to run through pre-game. You really need to pre-generate these before hand and have a right models painted, which is a lot of work for a small ‘pick-up’ skirmish game.

In our game my Mercenaries took a good kicking. The Star Cops captured 4 of them and killed 1, for only 1 badly wounded cop in return. Of course, that now suggests a follow-on game for a rescue mission to recover the four prisoners, but if this was an on-going campaign then my squad would be decimated already, and the 5 miniatures I’d bought and painted up would be useless and require 5 new ones. Here is a problem with the whole genre of ‘narrative skirmish games’ (Inquisitor being a classic for this), there is are no grunts to just get killed, everybody is a detailed character and specific to their model. Their loss is a massive loss and means a miniatures is now useless (unless you replace the loss with the same model, which sort of defeats the object of the narrative - a character dies only to be replaced by almost exactly the same person doesn’t happen much in books or movies).

Rogue Stars has its good points, but it leaves me a bit disappointed. I’m not hankering for another go at it. I enjoyed the game as a learning/testing experience, but it took over 3 hours to play which, even with this being a learning experience and checking rules etc, seems long. This from a man who used to play Phoenix Command (the big-daddy of ultra-detailed firearms combat rules), but times have moved on.

I’d play again, but I can’t see it becoming a regular in my gaming circle. As with all these small Osprey games, they feel flimsy, never really getting into the meat of the hobby. The rules do the minimum and that’s about it. More ‘play it twice and throw it away’, not sure I like that… for me my hobby is about longevity (having been at it 30+ years). In our world where your PC or phone or washing machine is redundant after a year, I like that my model soldiers remain in use for 20+ years and never grow old. Osprey just seem to want us all to move onto to the ‘next thing’ all the time.

Overall, Rogue Stars gets 2 stars out of 5 from me. 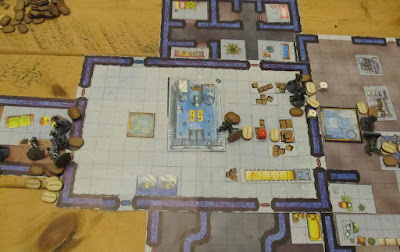 Game in progress, as the firefight in the ship's cargo hold begins. My Mercenary leader is down, shot whilst leading the way. The rest of my men are still making their way through the engine room. Note those counter stacks. 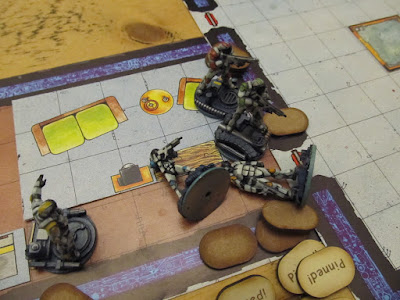 A grenade goes off in the doorway as the Star Cops try to get through, knocking 2 prone, but only injuring the lead guy. Not sure the rules on grenades are well explained - how do you do damage to multiple targets hit by 1 attack? 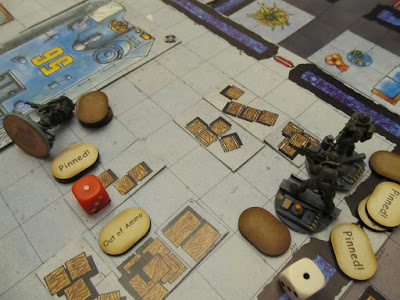 Counters everywhere! To illustrate, my down leader has Stress counters (brown), pinned counters, a dice for wounds and his gun is empty. All could be written down on paper, but a visual reminder helps, especially in a first game when you don't know what these things mean.