Today, 548th Volksgrenadier’s task would be to delay the Russian advance for as long as they could. This time the action would take place on the northern edge of Juditten, a small hamlet called Friedrichswald. The Germans had their defence lines, trenches and dug-in anti-tank guns across the water-soaked, muddy, ploughed fields, with the Russian attacking south passed the Waldgarten Farm, formerly a regimental command post for the division but abandoned yesterday.

The scenario would be a Delaying Action, giving my Russians just 9 turns to break the defenders. A tough ask, but I could pick a force for the job. No more finesse, this nut would require a Russian sledgehammer to crack. I went for a full T-34 company, a full infantry company, my commander in a T-34 (no arty to spot for), 3 snipers and a timed 152mm artillery strike. That’s 9 (!) officers.

The defenders had their infantry platoon dug-in, with an 88, Pak-40 and a captured Zis3 as anti-tank defence, and a little 75mm infantry gun as well. Behind they had a mortar and a sIG33 150mm dug-in, with the FHQ spotting for that big gun. His reinforcements were his recce infantry (on bicycles), a Marder, recce platoon HQ and another infantry squad. No tanks! Oh well, but everything had positions with 4+ or 3+ covers aves, off course that reduced their overall BR, but with the infantry it was still a reasonable 35. The Red’s scored a massive 55. I’d need it.

I decided to just go for it. After the German deployment, pick a flank to hit hard, very hard, and over load it. No point in attacking up the centre and getting his full firepower. The opposite flank just needed a holding force, enough to keep the Germans from re-deploying to meet the main attack (2 tanks and infantry would do it). After surveying the enemy positions (my snipers jobs), I’d go over the open ground on my right (enemy left), directly at the orchard. that looked weakest. If that didn’t break the enemy, then the position of objectives would give me a chance at getting all three.

After my 152mm barrage (did zippo!), first onto the table was my FHQ’s T-34, mainly because I wanted the reinforcement re-roll to get my troops here faster. No holding back. The first T-34s and tank riding infantry began to roll south, flinging HE into the orchard and scoring some pins. Coming back was mortar fire and 150mm infantry gun, scoring some pins too, that would slow me down.

Turn 2, and more T34s rolled on my table edge, with more tank riders, and the lead tanks (those not pinned) hammered the orchard again and their infantry jumped down and began to close in on foot. With most of the defenders pinned, some close range 75mm infantry gun fire caused more pinning, which had now reached 8 units. To get my attack moving and  because I had BR to burn I took 2 counters and got everything back in action for next turn. The Germans were feeling the pressure, they didn’t have the firepower to stop the hammer blow. Too many tanks and riflemen were coming. So it proved , the red riflemen closed into short range and opened fire, the German MG team was wiped out and the Zis3 pinned… vital results with multiple targets to engage. A single Panzerfaust caused the loss of my first T-34, but the infantry gun fired and limbered up to its horse tow. Trying to get away the horse tow was destroyed by tank MG fire and gun crew fled under more small arms fire. The orchard position collapsed, the Zis 3 crew wiped out by tank MG fore and the infantry squad cut down to a man, not a German lived in the orchard. But the turns were counting down. Still, it looked bad for the Germans.

My infantry swarmed forwards (Ura!), under cover of more tank HE fire, they reached the building behind the orchard and assaulted it, heavy losses on both sides, but worth it, capture that house would but me on a second objective. The German PaK-40, dug-in on the road had, so far, had a bad day, pinned, then missing 3 shots (loader team) at short range. Now they were in hand to hand combat with assaulting enemy infantry, but they held out (3+ covers save) and fought the Russians off, before getting back on the gun. The Germans were desperate for their reserves, the Reds were flooding into the breach. And, with luck, he got them, a maximum 6 units, and on came the extra infantry, the Marder and a recon HQ to call in the mortar fire (the spotter for his mortars - platoon HQ had died to a man in the building). The Marder raced up the road and got its first shot off, smashing my second T-34. The fusiliers on their bicycles raced for the buildings, now the centre of this battle. My infantry kept coming, but long range MG fire was whittling them down, one platoon was now gutted, the second was heavily engaged, the third was moving up (Ura!), to press the attack onto the objectives. My leading T-34s switched to AP shells and then failed to hit the Marder, which scored a second kill (but then ran out of ammo and had to withdraw as well, but with a job well done). My suppressing fire (which had been really good in the early turns) now failed me, and the Germans were back in the building again, and my riflemen were trying to assault it - again. Under a hail of fire, they failed, and were cut down to the man. What had been a sweeping assault was bogging down in a desperate scrambled defence by the German reinforcements. Their 88 swung round to get a few long range shots, but then ran out of ammo on a ‘low ammo’ counter. The PaK-40 was still fighting, my assaulting infantry pinned down and refusing to resume the fight. The PaK scored another tank kill at point blank range. It was now turn 7, the counter stacks looked big, mine bigger, but I could take it. Just 2 turns left to win it.

Then it went wrong. My inexperience infantry, once unpinned again, refused to press the assaults, and the PaK scored another tank kill, this time my FHQ, who, out of HE ammo, had charged the gun with MGs, failed to score the kills and caught a 75mm AP shell back in reply. 2 more chits. One was an aircraft, but the VVS didn’t show to aid me.

It was the last turn, and it was close. Could I force the Germans over their break point? Short answer was - no, not quite, their cover saves continued to thwart my fire… it all petered out. When another T-34 (my 6th) was lost to a Panzerfaust, it saw my counter total reach 56… broken in turn 9. Noooo!

The Germans had also been close 31 from 35, so 1 or 2 more chits would have done it. It had been brutal, I can’t recall a game with so many infantry close assaults (or at least attempts). Smoking T-34s littered the fields and orchard all the way into Friedrichswalde, but the shell shock Volksgrenadiers had somehow hung-on to win it.

2 campaign victory points to the Germans see them take a 5-3 lead in the campaign and earn 5th Panzer time for a second counter-attack game. That’s coming next… Konigsberg is proving tough.

Here are some photos of the action… camera batteries working this time. 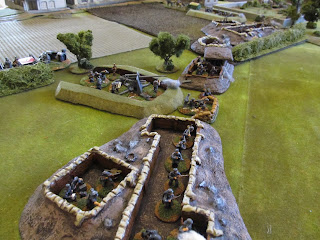 German trenches and dug-out, formidable second line of defences outside Konigsberg.
I tried to go around these. 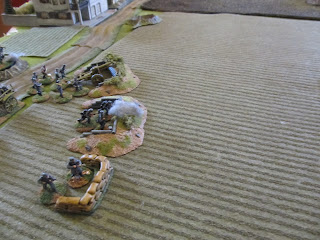 Rearward positions, including the sIG33. 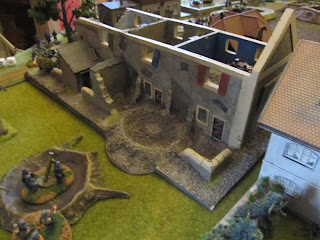 In Friedrichswalde, the last Germans. 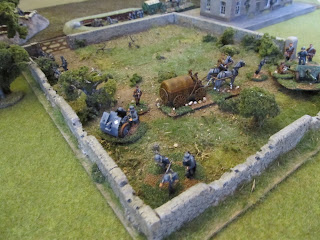 The orchard position, about to face the overwhelming onrush of tanks and men. 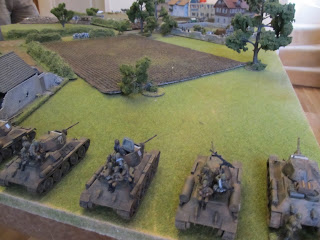 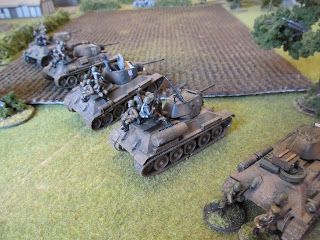 Crossing the quagmire, the plowed fields were very wet, but tracked vehicles were unaffected in the scenario, good job too! 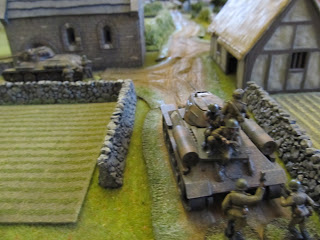 Holding force on my right, enough to keep the Germans pinned in place. 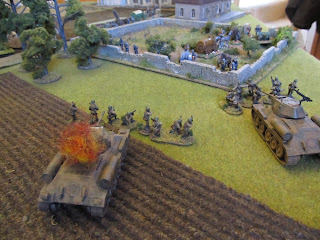 First tank lost as the assault on the walled orchard starts. 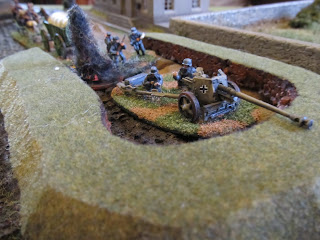 Pak pinned in its dug-out, once unpinned it became the lynchpin of the defence. It just would not die! 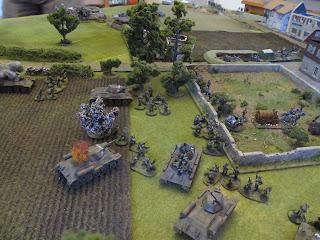 Overrun, the orchard about to fall. 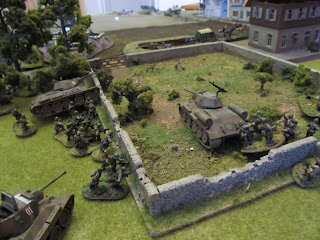 The orhcard is cleared and the attack can move on, next, that Pak and the house. 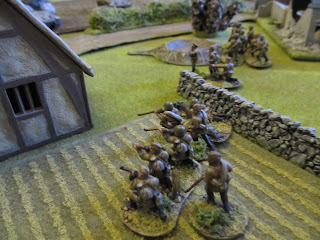 Third platoon arrive on foot, and start to run... 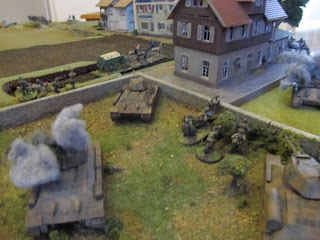 The Pak get its first victim. The house about to be assaulted by riflemen, a bitter to-fro melee that cost the Russians dear. 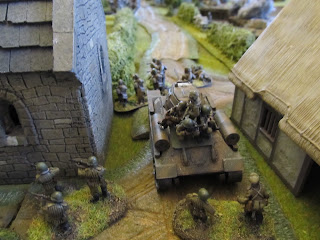 Last reserve moving up the road.