A school incept day meant I had an opponent at a loose end for a quick Friday afternoon tester game of my developing sci-fi rules. Dragged from the delights of the Xbox to be forced to push toy-soldiers around… how cruel the world can be!

Anyway, the game is a new set of rules, using dice, cards and counters (I defo wanted all three) for sci-fi (space opera really) battles with small(ish) forces of 20-30 miniatures a-side, with 2-3 vehicles tops. No huge hulking war machines here (with models too big for the tabletop), mostly boots on the ground a few robots, battlesuits and light AFVs.

Here are a few snaps of the action, as I take the ‘alien coalition’ forces against the humans and their light tank, on my play-test desert world of Zentauri. In the scenario, the aliens have just attacked and captured a desert landing field and shuttle, and the humans are launching an urgent counter-attack to get it back.

Still much to be done, and the extra ‘zing’ factor to be found… but the basics of moving, shooting and morale are working well. It isn’t a game of mega-destruction, everything on the table doesn’t have to die to win, its more about capturing your secret objectives. Killing stuff helps, but it’ll take a lot of killing to win if you ignore the mission.

The test was useful, I have a long list of issues and tweaks from it, including that current ‘heroic actions’ (only available to 'Heroe's) that are a bit awesome; moving, shooting and fighting on one action is great (for the hero) especially if he’s a well-armed and armoured battlesuit with a jump jets… better reign that in, because after awhile he was just annoying (and he was on my side), too much like as a one man army (I like games fought and won by the rank and file, not by uber-men or uber-units). The light tank was very hard to kill too, but maybe that is right (although if all these guys have wiz-bang super-blasters as small arms maybe armour isn’t worth so much).

In the end the humans had a narrow win, taking 1 of their objectives and almost getting the other with the recce armoured car’s bold dash. Their robot was way too slow and did nothing… another tweak required. My recce stuff was mostly useless, fast, but that just meant quickly dead.

The miniatures are from many places and ranges with various conversion jobs too… I want the game to be about using any miniatures you have and like, why can’t 40K miniatures face Affinity guys or Star Wars or a Beyond the Gate of Antares force in some far distant galaxy in your own dining room?

No publishing plan for these rules yet, still deep in slow development hell, but one day they may see the light of day, if I really like them. As ever, the only reason to do this is to find the rules I really want to play. 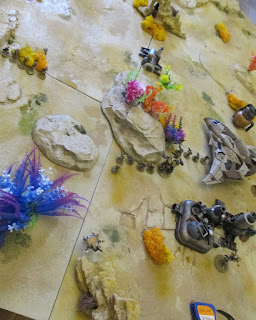 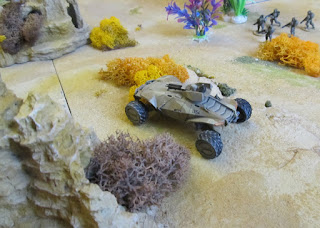 Recce armoured car lurking, awaiting its moment to rush for the objective. 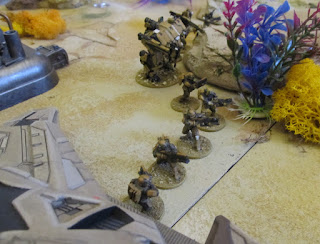 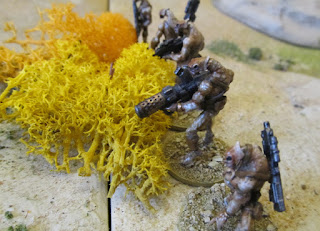 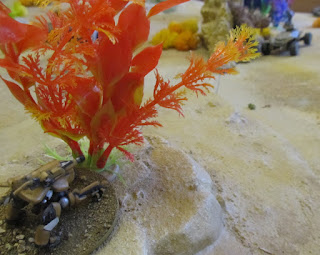 My recce drone zips forwards to take cover, shortly before being blown sky-high. 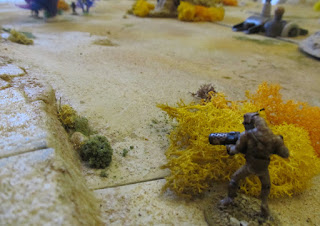 Last alien scout, about to pull back out of range to avoid wiping the squad out, which is bad. 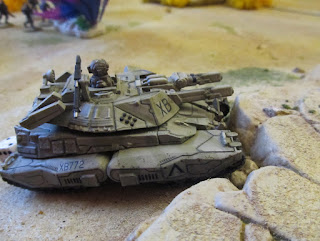 Human light tank moves up in hull-down firing position over the landing field. 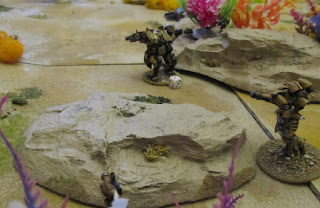 Alien battlesuits returning fire at the tank... eventually destroying it. 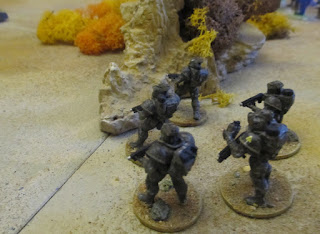 Human combat infantry, this is their command group. 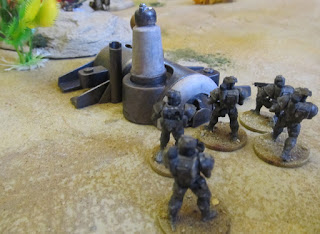 Pushing up, leading from the front, the command squad close in the landing field, under covering fire from one of their squads. That 'techno-thing' is an objective marker, seized by their gun's blazing assault. 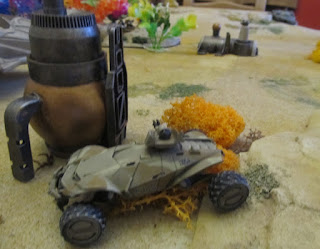 The fast armoured car rushed the landing field, cannons blazing, but doesn't quiet get to the objective.