Kursk again, well, this game was my opponent’s choice of theatres and he went for Kursk, to give his mid-war Russians a run-out, so it would be another chance to put my Germans up to the test again. Slightly larger game, another meeting engagement…700 points this time. My force would be very similar to the last game, as really my Germans are for 44-45 games, so I’m scratching about a bit for ’43… but Tiger 112 would get another roll out at least.

Another T-34 charge to face… and another slugging match in which both sides just went at it hammer and tongs… no quarter asked or given… it was great fun. Aggression from both sides.

My Germans rolled on in goodly time, a smaller, hard hitting force… and seized one objective, then my armoured panzer grenadiers rushed the objective on Point 126, a small hillock, at speed. Up the hill, out, MG team pinning the Russia recce troops in the trees, then the veteran rifle squad assaulted them and wiped them out… fast and efficient. That objective was mine.

The Russians arrived slower, but held back, building up the T-34s and T-60s, weathering long range tank fire, and right under my 150mm timed artillery barrage that knocked out a T-34 and a T-70. Meanwhile, Russian 120mm mortars were raining on my lines and kept pinning my tanks (the Tiger!), until a direct hit came through the roof of the house my forward HQ had set-up in, wiping it out in one explosion. Disaster, no re-roll, no tactical co-ordination, lost an officer,and 2 chits. Drat!

Still, you must fight on, and soon the Luftwaffe had arrived (a bit of luck), my timed FW-190 strike bombing the village church as a Stuka plunged in on his massing tanks… to kill another T-34 and adding more pinning. The VVS responded with a Sturmovik bombing run, and I had once again failed to get my 20mm flak onto ambush fire in time to stop it - stupid!. The IL-2’s bombing KO’d a Panzer IV. That flak crew are fired! I sent forward my FAMO to fix it, but a 120mm bomb KO’d it too… good grief!

As we traded aircraft bombs, artillery shells and mortar bombs the Russian tanks built up, lots of HE flying back to pin my panzers. When all 3 (remaining) were pinned, the other T-34s got into gear and began to roll. Here they come. I had little to answer with… a desperate artillery request from my FO, for some pinning but not much else. Those T-34s would be on me in 2 turns.

So they were, firing at point blank range, but my Tiger got a lucky ‘Beyond the call of duty' test and passes, suddenly back in the fight it demolished one T-34, then another in short order… Russian chits were building up quick. On Point 126 my grenadiers fought at close range, pinning T-34s with MG fire, then assaulting a passing T-60 with AT grenades, scoring a hit, but then only pinning it - awful dice roll. Still, they had pinned 4 AFVs in a desperate close quarters defence of the hill top. Heavily pinned the Russian attack looked like it might have shot it’s bolt as my panzer unpinned and lined them up in their gun sights. Only for the dice to desert me again, double 1 for orders, and 3 officers left 5 orders at the critical moment. Obviously, the panzers fired (and the artillery stopped), but they only scored 1 more kill. The Russians got off easy… and then took advantage, as T-34 shells destroyed two half-tracks and another Pz IV (with a side shot). All the counters were building up on my side… and the heavy pinning from earlier had been costly too. I was close to breaking, but the Russian player’s stack was actually larger.

In the end, despite heroics on Point 126, but with my tanks now out of AP ammo and seeking resupply (from my resupply truck which was being harassed by long range 76mm infantry gun fire), the next counter drawn broke me. BR 39, 40 in chits… the Russians, well, they were still 12 away, so 3-4 counters really… if only I’d have killed a few more tanks when the shots got easier. Instead, we’d have to give up our ground and that high point today.

A top game, just a real no-holding-back hammering from both sides. I could claim 8 tank kills (from 13 enemy) to 2 lost (from 4), and Tiger 112 was still rolling, if with empty ammo bins. Losing the CO early was a heavy blow, no tactical co-ordination when the panzers needed it, and the enemy 120mm mortars just kept rolling 6s!! Heavy, accurate barrages turn after turn. My Stuka eventually strafed them into silence (the battery was on table)… but the damage was done early.

Here are few pictures of the action around Point 126 - and still a Tiger doesn’t die… a defeat, but who cares as long as it’s fun? 1-1 over two Kursk games seems fair enough. Facing that tank charge is tough... 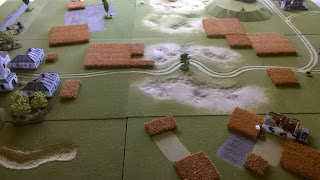 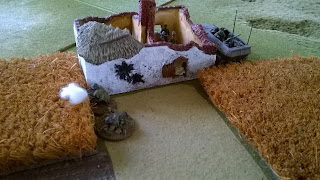 My FHQ take their place in the house... soon to be hit by 120mm shells... sniper hides in the corn. 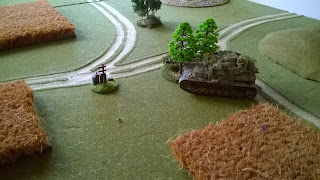 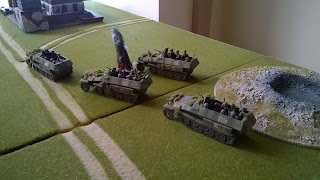 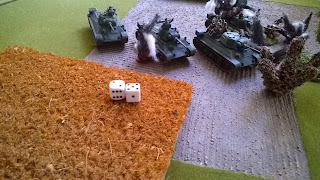 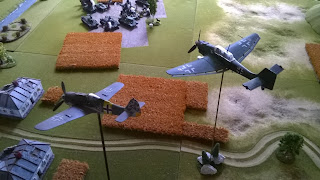 Luftwaffe flying display... 190 and Ju-87 in bound together. 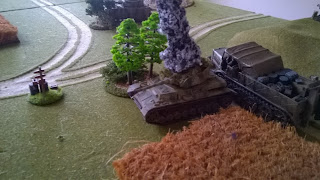 Victim of the Sturmovik, FAMO on hand, but not for long, another 120mm mortar victim. 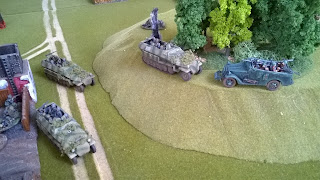 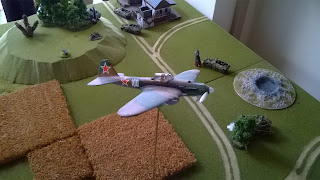 IL-2 does it's work, unmolested by 20mm flak due to my 'oversight'. 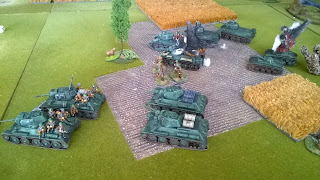 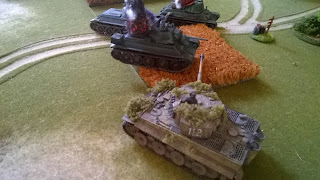 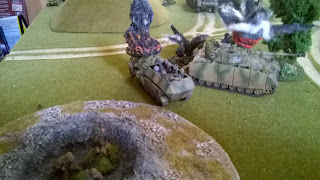