After their defeat in game 1, 2 weeks ago, my Austrians had fallen back 10 miles down the road to Rohrzendorf to make a new stand. Here, I chose a ‘Defence’ battle plan, and dug-in behind some earthworks in the centre to hold the bold ‘All Out Attack’ plan of General Renard’s division, Jacqinot’s infantry brigade on the left, De Loup's on the right. This was a small game, each with just 2 brigades under command and no further support, a probe by the French vanguard against the Austria positions around Rohrzendorf.

With their previous win, aggressive tactics and the historical president for 1809, the French had the overwhelming tactical advantage at the start of the game, so chose table edges (denying me the small hamlet). I also deployed first, into my earthworks and on the hill on the my right with Achterburg’s infantry brigade. The left was Krawietz Advanced Guard brigade, supported by the 5th Hussars and some extra 6 pdr guns from the central reserve.

General Renard chose to attack Klopp’s position on both flanks, avoiding the bloody work of clearing the earthworks. His right and left were both led by veteran line units, supported by regular units and each with a well-stocked 8 pdr battery. No cavalry aid for the French today, an all infantry assault. So, once deployed, we began the cannonade.

The French set-off towards me, left and right, drums beating, but in the faster (but vulnerable) column of march, expecting to re-deploy into column of attack en route. His guns proved accurate again and his early counter-battery fire instantly had my gunners rallying, but they stood, aided by a 'Steady Lads!' special event. Out came all the skirmishers as the light companies deployed to screen both sides, the French’s superior Voltigeurs again proving a menace and harassing my lines to good effect, except on the far left (right for him), where my jaegers and Grenz skirmishers kept him at bay and even did some damage back for once. Seeing the weight of his attack here, I quickly sent the Hussars over to back-up the Grenz line and then moved them up into charge range. This caused the French to falter, and forced his veteran red-coated Swiss battalion into square, now at the mercy of my 6 pdr guns and the grenz/jager combo skirmishers. Their square was soon in big trouble, it tried to shuffle back, tortuously slow. When my cannons found the range in was carnage and the square soon broke… hurrah. My Hussars, flush from this ‘success’ (of just being there), moved up again to threaten the next column, only to be driven back by resolute French skirmishers that kept shooting Hussars from the saddle. Light cavalry have a special ‘light cavalry only’ order to harass enemy infantry skirmishers themselves, and drive them in. It's one of their useful roles. My bold 5th Hussars failed at this twice! So much for elan!

Still, Kraweitz had held the French on the left to good effect, but this was really his weaker ‘feint attack’. The main French drive was on my far right, with no Hussars to help here, just regular line infantry white-coats.

Here, the French pressed on, still skirmishing like mad and causing slow losses, which I rallied off, but skirmishing alone is unlikely to break the enemy. Jacqinot’s brigade reformed into attack columns with his veterans and stepped on, into the volleys from my lines. A special event of ‘obscuring smoke’ made these volleys less than effective, then, as a random ‘special circumstance’ at the start of the scenario (optional, but we need to test such things), I’d rolled an approaching summer thunderstorm. It stuck now (on a 6 rolled) and the sudden downpour further reduced the firing for a turn, and as the rain tipped down and lighting forked, the French charged! Oh, the drama!

My first line was beaten, easily, and fled back in disorder. But, I had a second reserve battalion behind to hold. Their own fire did nothing in the heavy rain, but they did see-off his ragged Irish battalion... who also fell back to regroup and rally. The bayonet work would settle the day here… with luck I got some good dice (helped by Klopp's command re-rolls). My second battalion saw-off his next charge and broke his veteran battalion, (his dice just gave-up and failed to get above a 2 for about 6 rolls!). Somehow, by a small miracle, my line had held and the French fell back, his army broken as the storm past on. A marginal Austrian win for von Klopp’s division. Phew!

Great fun. So the campaign moves on… the next battle will be a Siege Assault (randomly generated in the campaign special events), with the Austrians now holding the old walls of Rohrzendorf from a French assault. No rules for this scenario yet, so I better write them. We cooked up a basic plan in the post-game discussions.

Not many pictures, the game was busy and required hard-thinking! Really happy with it atm. Nice feel to it, not gotterdamerung level losses to get a result, infantry/cavalry/artillery all well balanced. French veterans are tough, but as seen today, not unbreakable.

To give a better idea of forces, here is my deployment labelled up. 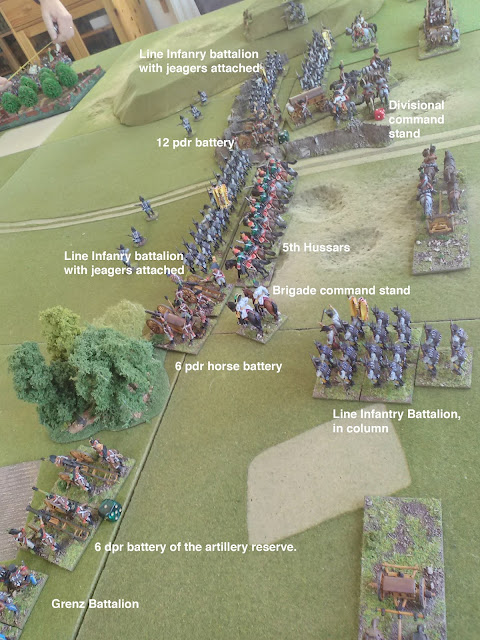