'Battle of Dresden', game prep for Soldiers of Napoleon

The next game in our Napoleonics mini-campaign is a large 'grand' battle... with both our commands involved in the engagement as a small part of the bigger fight. For the 1813 setting, Dresden fits the bill... so our two divisions will come face-to-face on August 26th.

I've had to prepare the game and select my force. The force is split between my own mandatory division, 'von Klopp's 3rd Division of the Line' (part of Hesse-Homberg's Corps), and the wider army's forces also available to support me (I still get to choose them, becasue, well, you can only use the models you have). As the largest game playable in 'Soldiers of Napoleon', it will involve 5 brigades a-side. 3 will initially be deployed and 2 will be in reserve and arriving as the game progresses (hopefully, there is chance they won't show-up).

Here is my choice of forces, to give an idea of the model requirement and force organsiation for a large game. This is full bells-and-whistles here, we are using optional rules such as 'Commanders of Note', 'Unique units' (for me the Jaeger detachments) and extras from the 'Central Reserve' (like my supply wagon). You can just play with the basics though, infantry, cavalry, guns... 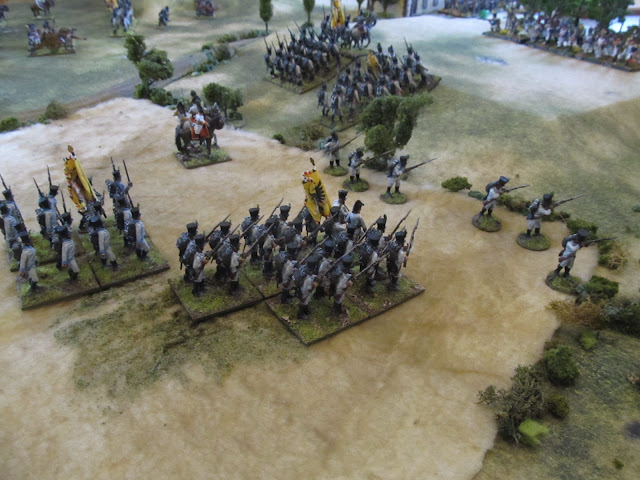 The additional forces, to bring it up to the 1,100 points of the battle, are both reserve brigades. This was not a requirement, they could have been any type of brigade, and the divisional troops could be placed in reserve if required, it's just I went with two brigades that always start in reserve. Some brigades never start the battle in the frontline, coming from the 'army reserve'. The French Imperial Guard are treated the same way... they come later, to decide the outcome. I'm expecting to meet some soon...

The next prep was to generate a battlefield, using the game's terrain generator system. We'll be playing on a 6'x6' tabletop, so this is divided into 9 2'x2' squares. Each then has terrain generated for it. First to see if each area has a peice of terrain, and, if so, what it is. We got (from left to right, starting top left):

Add to this are D3 random 'other' bits of terrain, in random areas. We rolled 2 extra peices. The first, in Area 4 was a hedged orchard, the second, in Area 8 was a marsh, wet-ground or pond. I went with a pond, as I have one to use in my terrain collection.

So, this is the ground we'll meet over, close to the village of Plauen (call it the Schumann's farm and fields), south of Dresden, on the first day of the Austrian's attack against St Cyr's Corps, as the French hold the city and await the arrival of Napoleon and his reinforcements. Here is a quick sketch map for both players to peruse pre-game. 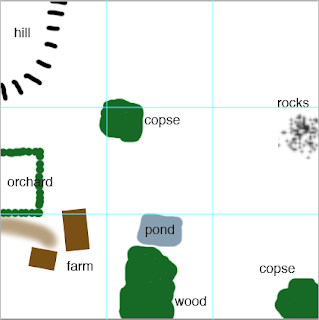 I have a force (all done, so no last minute painting required), and a battlefield. Time to get on with it... a full After Action Report will follow. 'Onward, for von Klopp, Emperor Francis and the Fatherland!'