I have an weakness for the occasional sci-fi skirmish game, usually set on my sci-fi gaming desert world of Zentauri-Alpha. This time, continuing the long (and not very urgent) quest to find a set of sci-fi skirmish rules I really like, we turned our hand to Star Breach. Available in basic form as a free PDF download, the rules got a plug on a gaming video-blog I sometimes watch, so I thought I'd give them a try - why not. The rules aren’t long or complex and are obviously slanted towards gaming with 40K or Star Wars stuff, but they are 'miniatures agnostic' and I figured I’d just make a couple of the game's army lists work for my miniatures. This was first trial anyway, so just get some stuff on the tabletop and play… 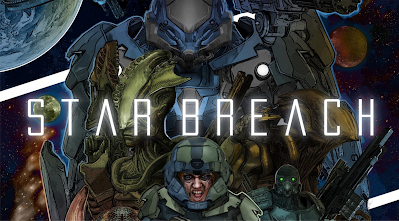 The scenario VPs was to have more men in one of the boards' 9 equal sectors (divided 3 x 3). Mechs would count as 2 men in the final tallying, after 6 turns of the game. This I have an issue with, I'm not a fan of games that have a set turn limit everybody knows, because weird things start to happen on turn 6 as the players rushes to grab objectives in the full knowledge the battle is now over. It happen here, so I’d defo change that, randomised ending, or some other system to end a game that players can’t predict and ‘game’ around, is required.

So off we went with a meeting engagement, both forces moving on and rushing forces to cover to get shooting. The initial exchanges of fire saw a couple of aliens gunned down and killed by terrible dice rolls, as well as the human scout vapourised… the game uses a system of 2D6 rolls (nice) modified for accuracy, shooting skill etc, against an opposed 2D6 modified for dodging, cover, etc. The difference in scores is the basic damage, modified by the weapon’s damage and then reduced by the target’s armour. Pretty simple, but with a wide range of results, mostly pushed towards the middle range by the 2D6 roll. But you can get freak results and take a lot of damage in 1 hit, but rarely, I liked this a lot.

After the first 2 turns, the humans had a lead and had spread out across the table to advance into the middle 3 sectors. The two mechs had squared up and opened fire on each other, with the alien mech getting the upper hand and inflicting some damage, but not enough to threaten the human mech with destruction. Still, the larger 'mechs' seems about right in firepower (they can fire twice) and vulnerability, tough (ish), but you can hurt them with heavy weapons and even lighter weapons on a really good roll (and a bad one by them).

As the aliens also moved up, through the cover, pulse-fire blazing, we got to grenade throwing range, and both sides launched a few. The aliens used a plasma grenade to little effect then a EMP grenade which resulted in the human officerand one trooper being unable to shoot next turn (weapons jinxed). Useful. The humans threw back frags and scored minor damage, I like that they can be used with no LoS, but again, not very accurately. With the grenade throwing done, the game was approaching its end. The human Mech had used a smoke grenades cover to escape the incoming fire and take cover behind the mine-transporter, saving itself from probable destruction.

So far we hadn’t had any close combat, until the alien leader rushed over the central rocks to jump the human medic, and wound him in the following melee, which has a neat mechanic for resolving and I like that the winner can chose to have a second go, or disengage, so melee can become furious and deadly. It did now become very obvious that with all their advantages, better in all stats, and capable of using the 'heroic-actions' game-phase as well as normal orders phase, (so they go twice as often), that leaders, specialists and mechs were very, very hard to kill. This I’m not sold on… its a bit 'one-man-army syndrome', he can take on many times his own number. Hmmm…

With turn 6, the usual funny-games went on as both players tried to get the advantage in numbers in various sectors… which I don’t like. On adding up the final victory points, the actual points value of the troops killed and a bonus for where the 9 sectors they hold are (more for those further across the table). It was, err.. a draw, the aliens had just edged it, but not by enough to claim the win. Oh, a draw… not a massive fan of that after 4 hours of play.

Timing would be another thumbs down, game length was too long… even if ‘first game’ is taken into account, we had the rules down after a few turns, but with shooting and melee modifier lists to run through, a small skirmish just stretched out for too long… I’d expected more like 2 hours for this size of game with around a dozen models aside.

Still, it was OK, 3-stars from me and I’ll try the rules again, to see if we can speed it up a bit. Not terrible and some rules-issues to fix for me, but Star Breach is worth a second play.