February 7th, 1944 - Japanese forces are moving south through the Mayu Hills, to cut the road (track) through the Ngayedauk Pass, the main supply and transport route for 7th Indian Division over the Mayu Hills. 7th Division have sent out strong fighting patrols to slow or prevent the Japanese progress towards this important jungle road. The longer the route down from the pass is open, the more forces will be able to reach the box defence area that is just being established. The 25th Dragoon’s M3 tanks and men of the 2nd Battalion, West Yorkshire Regiment, are moving over the pass and down through the hills and these will be vital to the defence of the Admin Box in future days. The patrols needs to buy them time to get into the box.

This would be an attack/counter-attack scenario, played in heavy rain on a table covered in jungle, hills, fast streams, etc. 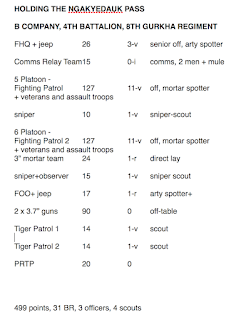 After the initial clash of the recce elements, the game developed into two battles really, one was with 6 Platoon on the left as they pushed along the jungle track and ran into strong Japanese elements, including being shelled from a mountain gun (and loader team), hitting an PRTP with mostly harassing barrages - to be christened Whizz-Bang-Willy. 5 Platoon would move across the stream and up the very steep jungle hill (the top was an objective). They claimed this after destroying a Japanese recce patrol in a ferocious close assault (1 Tiger patrol pinned it, the others jumped them and wiped them out with bayonet and kukri). Once on the hill, they went firm on ambush fire and awaited the arrival of the enemy… who approached cautiously and, in the end, baulked at the firepower waiting if the climbed the hills slopes. It was a wary stalemate here for many turns, but I had the objective. When the PHQ arrived, slogging up the hill, they could start throwing some 3” mortar bombs down on where the Japanese were lurking too.

Over with 6 Platoon pushing along the trail, they first ran into a hidden Japanese sniper, then infantry sections (some conscripts) which had rushed up over the ridge. A ferocious firefight followed, turn after turn, with much pinning. Many knee mortars from the ridge line had 6 Platoon well pinned down, and they took heavy losses, before pulling back with the survivors and the FOO. It had not gone well…

Behind, the Japanese were struggling to get more troops forward. My artillery and mortar were scoring pins and casualties each turn. His own commander was repeatedly refused artillery support, to hit the useful PRTP, for 7-8 turns asking and never got his guns!

With 6 platoon in trouble and pulling back, I had to do something on ‘5 Platoon Hill’. I took a bold move and gave up the ambush fire to advance, taking some rifle fire in return, but bringing the platoon’s firepower into place to shoot down the hill into the Japanese below. It proved too much, many Japanese infantry died on the hill’s lower slopes, even their stretcher-bearer team was shooting back! The Gurkhas pressed the attack down the slopes, and in 2 close assaults cut the Japanese down and forced 2 more counters on them… it was enough to break them. 5 Platoon had saved the day and secured the highest ground. But the Japanese conscripts were on the pass road, only held-up by the fire from my mountains guns.

It was excellent and very different game, with LoS restricted to just 20” and all jungle as hard cover, it was hard work. My counter draws were lucky (for once), finding four 1s and three special counters in my draws, so reaching only 24 of the 31 BR of the Gurkhas. it was closer than that though.

This was game 1 of a planned small campaign based around the ‘Admin Box’ in February ’44… my defenders have to hang-on long enough for relief to arrive (10 days away), but the Japanese will quickly run short of supplies (the Box has daily air resupply in place). We’ll use the history and the game results to develop the narrative, game-by-game. The next battle is already set for February 8th, when the Japanese launch a first dawn assault at the new box’s south-west perimeter. So an attack/defence game, with my men dug-in and backed up by the Indian mountain guns again, and maybe a tank (wow!), 25th Dragoon’s M3 Grants are my only armour. The Japanese have none… except for maybe a recce tankette - frightening.