AAR Paras - Advance to the Seine

Friday night saw a play-test game for the British Parachute army list I’ve been working on. It was a Hold the Line scenario, with the Paras attacking and a Luftwaffe Field Division battle group (treated as an Infantry Division) defending, assisted by some captured French armour in the shape of 2 Char-Bs and 3 Somua S-35s (all started as reinforcements). The Para’s reinforcements were their supporting armour: 2 Cromwells, 1 Churchill and an M10 Achilles.
Having set up the terrain and deployed, the Paras first had to negotiate a stream and marshy area that stretched the length of their deployment zone. It was hard going, and they emerged only to be engaged by suppressing fire from distant machine guns and an 88 positioned with a grandstand view from a far hillside. First objective for the Paras was the farm buildings on their right flank and, aided by their Ram Kangaroo transport, two sections just beat a Luftwaffe squad to it. As the two sections occupied the farm they destroyed the lone attacking German squad and then endured a heavy barrage of machine gun fire, mortar rounds and 88 fire, only loosing 3 men (but become suppressed).
The fight around the farm would rage for most of the game, and see the paratroops make a remarkable (flukey) string of 10 consecutive 4+ concealment saves to avoid becoming suppressed by the fusillade of MG fire directed at them.
For both sides the armour was slow to arrive. The Paras’ Cromwells and Churchill first navigating the difficult ground, and coming under long range 88 fire (one of which bounced off one lucky Cromwell).
Meanwhile, as the farmhouse battle continued, a single recce carrier team had made its way down the opposite flank, found an undefended gap and taken cover in the wreckage of a crashed Waco glider. Form here they took the Luftwaffe’s battle group HQ under Bren fire - a rude surprise for the German commander and 1 man died and he dived for cover.
At last the German armoured arrived (all at once) and made full speed (no great speed though) up the table, only pausing to destroy the bold recce Bren team. Meanwhile the hillside, along with the 88, mortar team and spotting platoon command squad were under 75mm pack howitzer fire, the 88 becoming suppressed and loosing 2 crew, then the survivors abandoned their gun!
The British armour cautiously advanced, taking the Luftwaffe’s hardened machine gun pillbox under suppressing HE fire, but to no effect. Still the Germans were having by far the worst of it, machine guns teams being destroyed by the return fire of paratroopers, who (still miraculously unsuppressed) pushed on from their farm to assault the orchard opposite, Ram Kangeroo alongside in support. The last defenders were already suppressed and stood little chance in the face of the British Army’s finest...
Then, with the German position already crumbling fast, the USAAF showed up (take cover!) - a P-47 swooping in to rocket a Char-B to destruction (the P-47 was standing in for Typhoon in the lists). The air attack was too much for the German morale and they broke. It had been a solid victory for the Paras, loosing just 9 morale (to the German 27), 10 men and a carrier. Their Achilles never showed up! 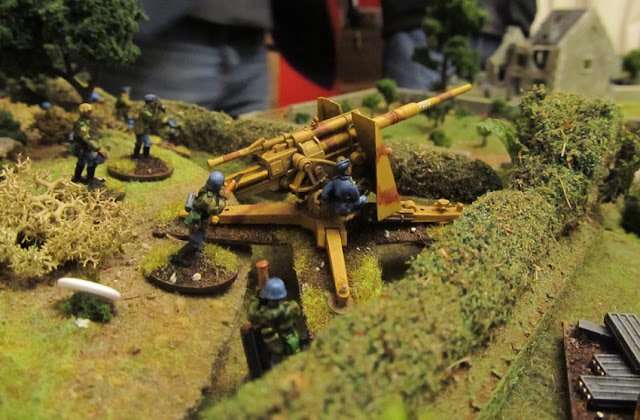 The Luftwaffe 88 – the master of all it surveyed! 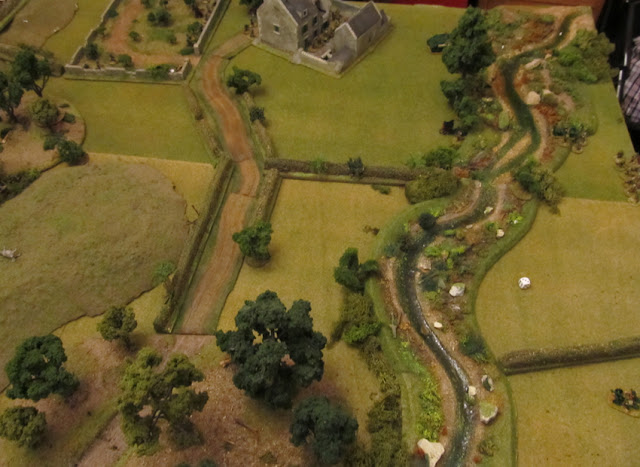 The Para’s deployment zone, behind the marsh and stream. Note a section has already reached the farm. 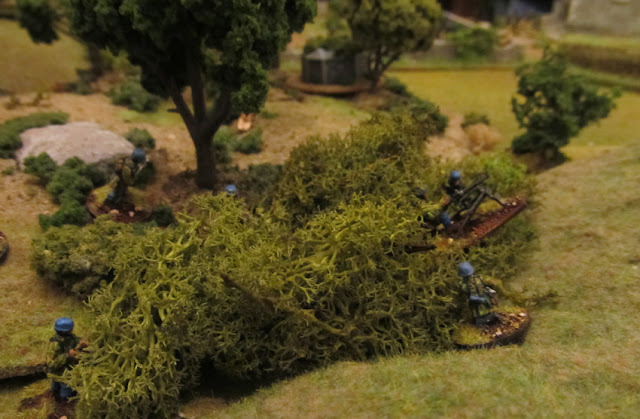 Lurking Luftwaffe troops in the central woods. The pillbox with HMG is behind. 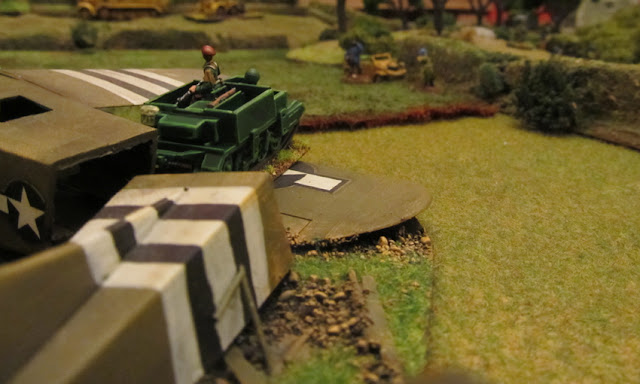 Behind enemy lines, the lone carrier and its target, the Luftwaffe commander. 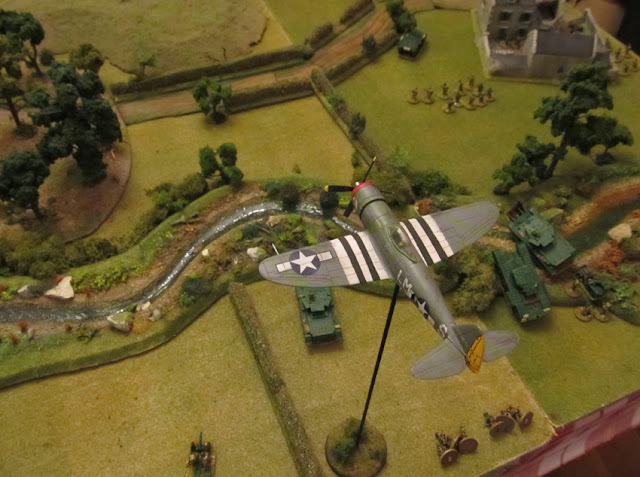 The USAAF arrives as the tanks wade the marsh. 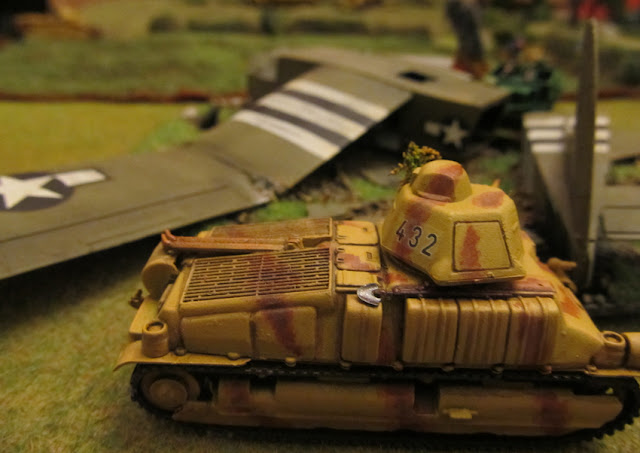 Death of the carrier – arrgh! 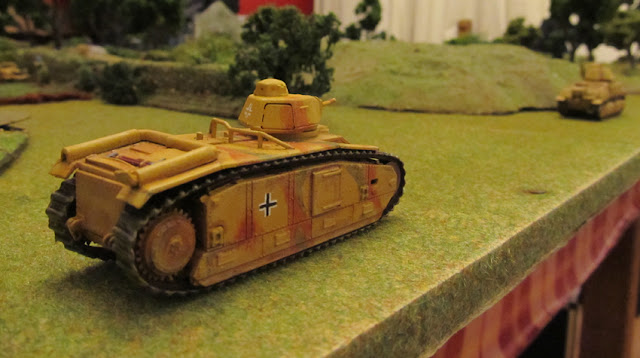 ‘German’ armour racing (well not much!) to the front. 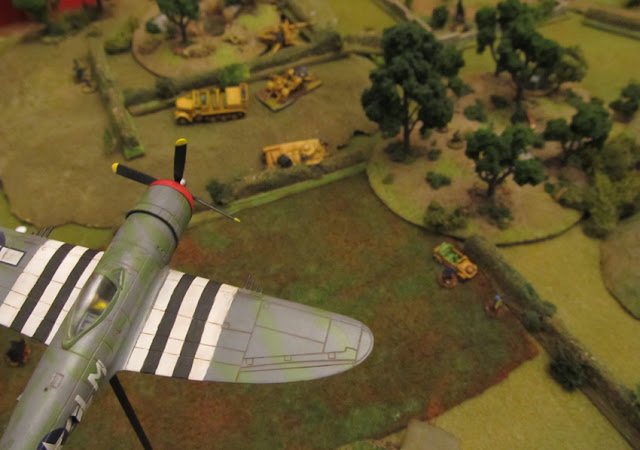 The P-47 overflies the hill, having just rocketed a Char-B. Score 1 kill. 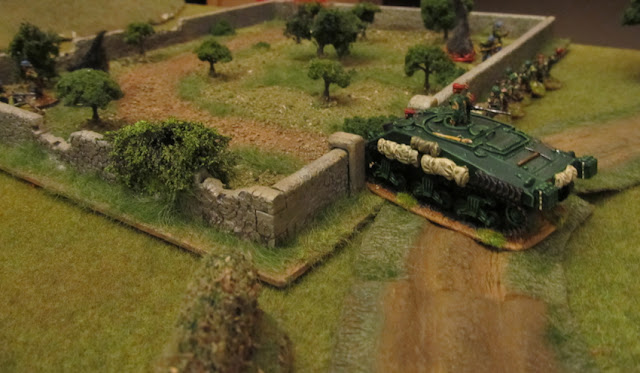