THE MANY SHADES OF GREY

Post-Christmas and New Year festivities it is time to get back to few wargaming projects. Santa brought me a Total Battle Miniatures church, which is fine model for my first project of the year. The casting was clean, very little trimming required, and the resin itself was less brittle than most. I already have a church (an old Hornby railway kit), which has seen many battles, but it is now well worn, rather damaged and this year I plan to re-vamp and upgrade most of my resin buildings (of which I have about 40!).
Having given all the parts a thorough wash in warm water I set to with the black spray for an equally thorough undercoat, and then had a couple of evenings merrily dry-brushing greys in front of the tele, from mid-tones to lighter, over the entire model. The basic grey was a mix of Vallejo paints, black, white and  including some yellow with light earth weathering powders added, to give it the yellow/brown hue, rather than a steely blue-grey which looks more like slate (Ok for roofs). The roof tiles were repainted black then dry brushed with a black and blue mix, gradually adding more blue. 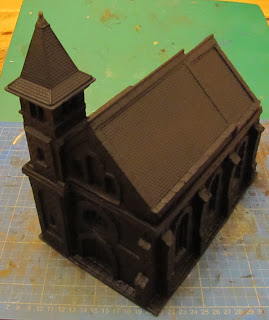 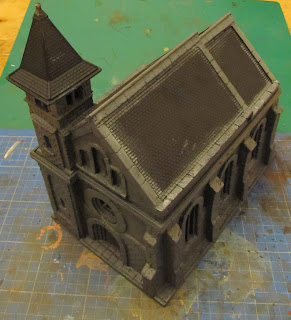 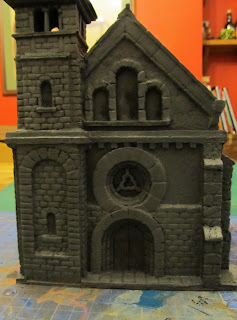 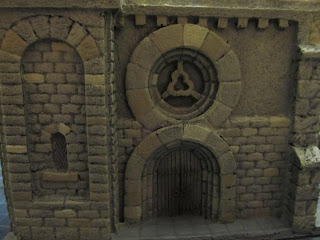 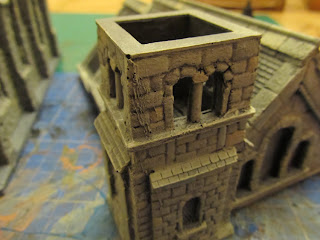 Once the building was all greyish-brown I added detail by picking out a few stone blocks with other grey-ish hues, adding a bit more yellow, white or brown and randomly painting in a few stones on each side. This breaks up the rather solid grey of the larger areas and a few brown weathering powders careful rubbed into the stone work also helps.  Details such as the door and the copper spire point had to be painted, and finally the stone surrounding flagstones in yet another grey tone.
Now came the final details, the transfers. Credit here must go to the decals, the stain glass transfers are superb little renders, and after some careful trimming fit very well into the window recesses. In all it took about an hour to get all the transfers in place.
Finally I added a few bits of clump foliage to the base, as bushes or ivy. Now it’s ready to see battle, hopefully soon - I have a KGN game planned for next week, AAR to follow no doubt.
Next, I’ll be back on my 1943 Russian Tank Corps, which is almost complete, but still short some infantry and a couple of SU-152s. I’ll try to get some photos posted when it’s all complete. 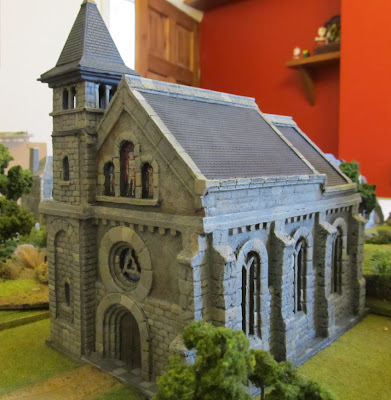 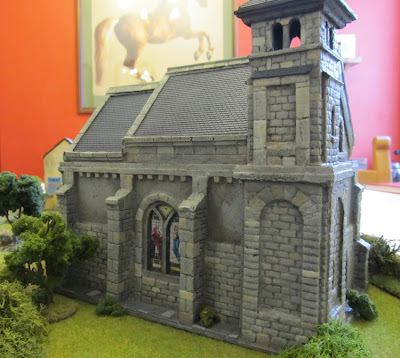