TANK BATTLE FOR THE VETERYNAME BRIDGES

As a final large play-test of the Kursk rules we set aside an afternoon (and some evening) to play a large 1500 pts ‘battalion’ game. The largest size covered by the command rules.

The scenario was for a meeting engagement, set during Operation Rumyantsev, as a Russian Tank Corps spearhead was marauding southwards towards Kharkov (so actually a month after the Citadel battles), with the Germans throwing in a quick ‘stopping-blow’ counter-attack to protect two pontoon bridges over a tributary stream of the Lopan River, near the scattered rural village of Veteryname.

The stream was not deep, only counting as difficult ground so as not to get in the way too much and allowing whoever was that end of the table to ford it.

For the game we would be using the ‘Flanking Attack’ scenario from the rulebook. This involves both sides having a main deployment zone at opposite corners, and secondary deployment zone for their flanking recce forces, at the other corners (again opposite each other).

The Germans would be countering with 3 Pz-IIIMs, 4 Pz IV Gs, 2 Tigers, 1 Ferdinand, various armoured cars as recce, 2 panzer grenadier platoons (1 armoured, 1 truck-borne), and an assault pioneer platoon also in half tracks. Add to this some on-table towed 105mm guns, a Marder, and radio truck and such like, including some artillery requests and a sneaky registered target point (more on that later).

Below are some photos of the action as it heated up. To start with our recce forces moved up and seized objectives, my BA-64 holding the pontoon bridge, the German armour cars in Veteryname itself, soon to be reinforced by racing armoured panzer grenadiers and their speedy half-tracks crossing from the stream.

My first attack would be against them, using all my T-70s (might as well fight the armoured cars), support by the SU-152 to blast the village to bits (and quickly run out of ammo).

It went well, quickly destroying a 222 and 232 with my little tanks on their flanking mission, but they had no infantry support to storm the village, because the foot-slogging platoon sent for the task was heavily pinned by 105mm and 150mm artillery fire guided by a Feisler Storch (which was missed by 10 consecutive shots from my AA DshK). The Marder also knocked out one of T-70s in an exchange of fire.

The tanks began to arrive, with my column of 13 T-34s snaking down the road to the bridge before the lead tank caught a Tiger’s 88 shell and exploded. That was the signal to turn sharp left and charge!

Before my tanks began their charge, the Katyushas and mortars had been hammering away, with the Katyusha destroying a Hanomag and a Pz IV as well as laying out 6 pinning markers. Good shooting, those MRLs are scary, but take along time to reload.

Then I got some of my own medicine back. My T-34s used the Tanks Corps’ Stal! Stal! Stal! special rule to begin a bold charge over the hill and to get amongst the deploying German tanks at close range. Unfortunately the hill was the Germans’ registered target point, and their requested artillery rained down a 210mm Nebelwerefer salvo, to horrid effect. Accurate and destructive, the salvo scored 7 direct hits (from 12 dice), which destroyed 5 T-34s and an SU-76 supporting the attack, which tore the heart out of the attack before it really got going.

Added to this destruction was that caused by 2 more kills from the Tigers, 2 from the surviving Panzer IVs, and 1 from the Ferdinand, and the T-34s were looking in very bad shape, ie scrap metal.

On the bright side my BA-64 and supporting infantry managed to fight off the flanking storm-troops attacking the pontoon bridge… so much for the elite assault infantry. The BA-64 was still holding out at the end of the game, having been assault twice with anti-tank grenades and survived.

In Veteryname the initial gun battle had died out as my T-70s ran out of ammo, became pinned, or got hit and died! The infantry was still stuck in a ferocious artillery barrage that never let up, turn after turn. My  Zvierboi had re-armed and using a ‘Beyond the Call of Duty’ test it rumbled to get a flank shot at a Tiger. It hit, at last a Tiger would die! No, my dice failed me and it was only pinned by the massive impact. Even its Krupp steel side armour was strong enough, although the crew must have been dazed by that hit!

In revenge for the ‘werfer strike, my PE-2 raced over and dropped its 8 bombs, but only caused more pinning.  My recce PO-2 survived the attention of a Flak Vierling to call down more mortar fire, but the panzers dominated the centre of the battlefield. Our alloted time was up, so we added up the battle rating losses, and the Germans had squeaked a victory,  having 7 more points left before breaking than my battle group. My tank corps would withdraw, leaving the bridges for the retreating Germans. 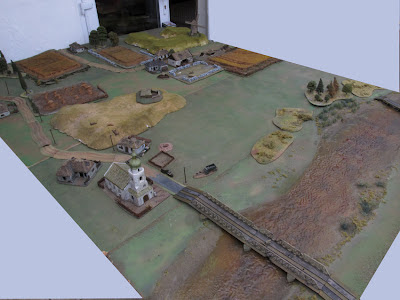 The stream and bridges. Germans deploying from the corner on the right (out of shot), Russians from the left. German recce top corner, by Veteryname. Russian recce bottom corner, to seize the bridge. 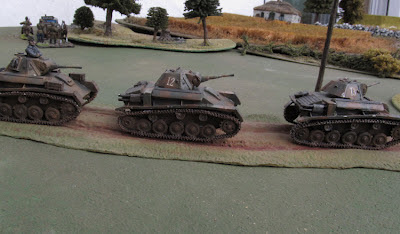 First T-70 platoon leading the advance and the first attack on Veteryname. 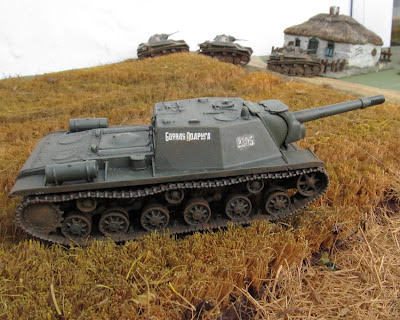 SU-152 on the move towards the village, second T-70 platoon flanking left behind. 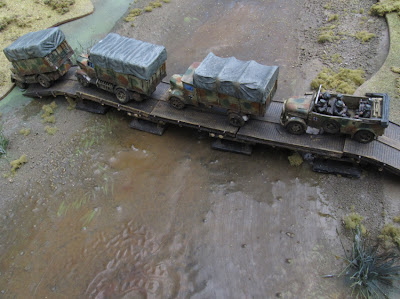 The second panzer grenadier platoon arrives, in march column over the small bridge. 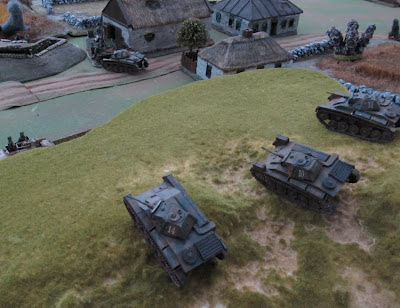 T-70s crest the hill and open fire on the village, trading fire with the Marder. 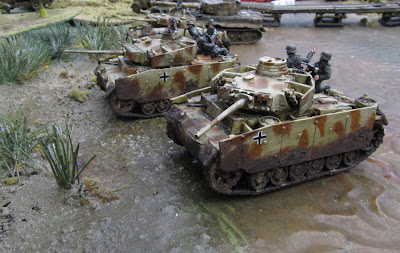 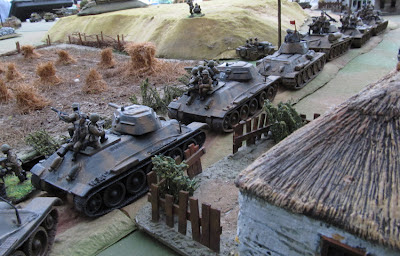 Red Steel! A reinforced T-34 company on the road towards the bridge. 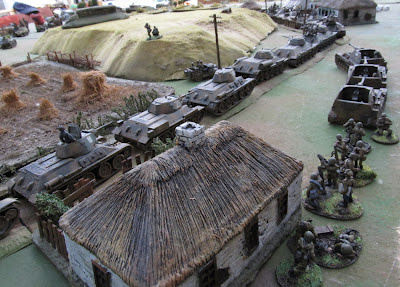 Same again, with the mortar battery deployed to open fire, and SU-76 battery  waiting to cross the road to reach their covering positions on the hill... a bad spot it turned out. 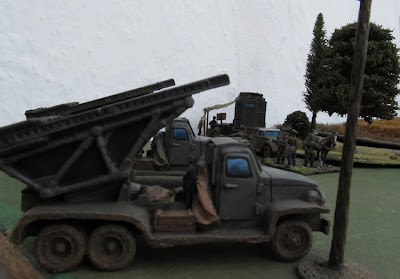 Russian artillery rolls onto the table edge. HQ and radio truck behind. 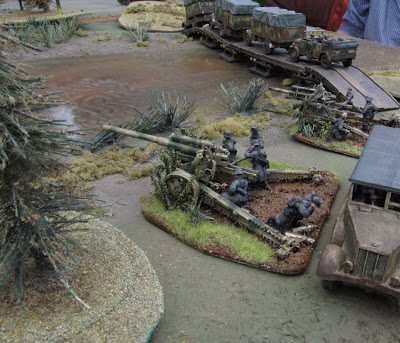 Deployed German artillery in the opposite corner, behind the stream. 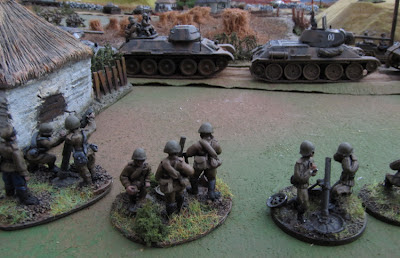 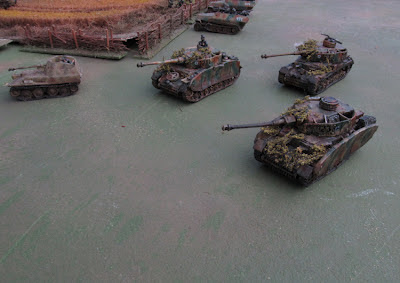 The Pz IVs in open ground. The Marder is reversing from the village in search of ammo. The Hanomags are hanging back, intimidated by all those T-70s around the village! 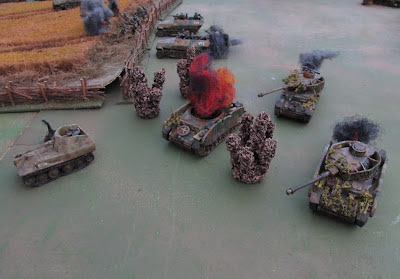 Stalin's Organs kills a Pz IV and pin everything else within 10" of its pre-registered target point (the corner of that field). 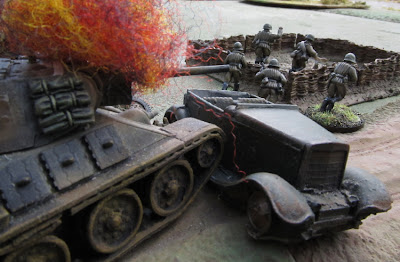 The lead T-34 is hit at long range by a Tiger. The surviving tank riders run for cover. That contact signalled the start of the charge. 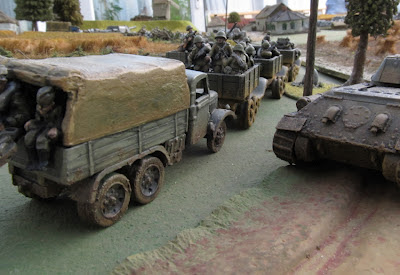 Motorised rifle platoon, bring up the rear, they never got in the fight. 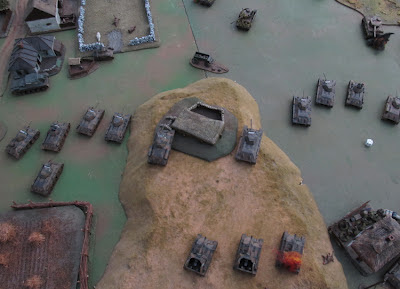 Stal! There they go again, the T-34s all charge over or around the hill. 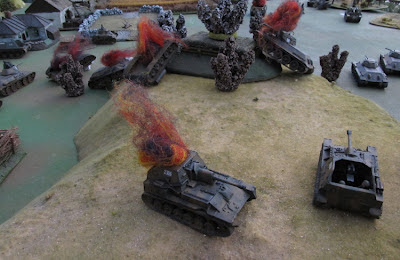 Ouch! the werfer strike causes carnage on the hill. 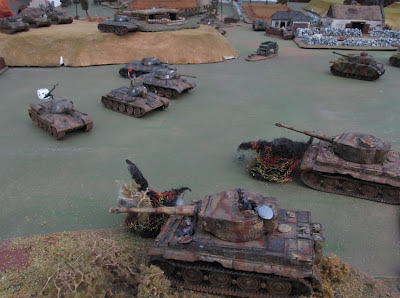 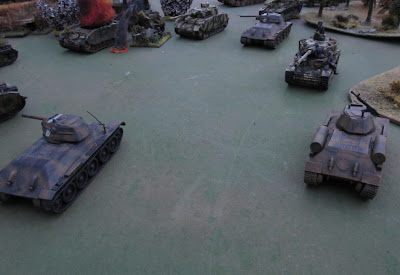 The tanks become intermingled in a frantic point-blank range brawl, which the T-34s lost. 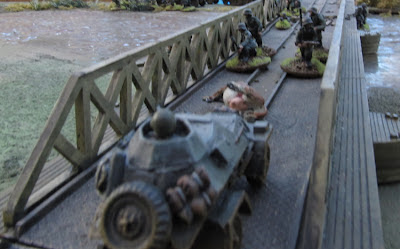 The heroic BA-64 holds the objective (marked by the dead cow) from attacking pioneer infantry. 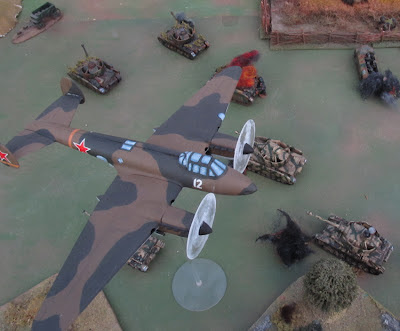 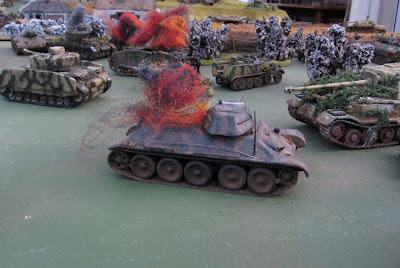 The Ferdinand gets in the fight and rolls through the carnage as the Katyusha fire lands again... too little too late to save the T-34s.
Posted by Warwick at 12:42