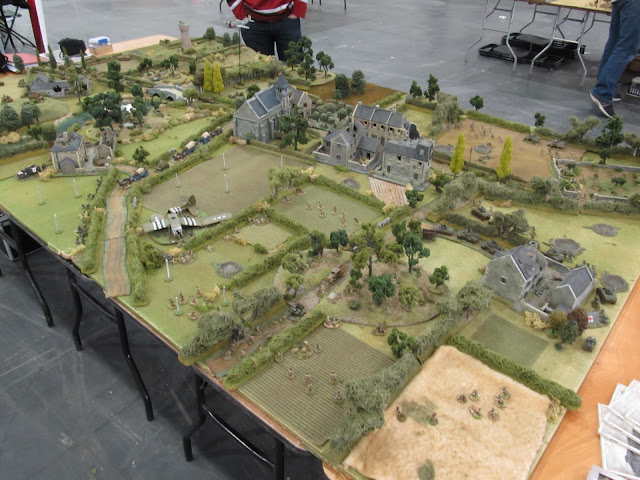 
Salute has been and gone for 2013, and Battlegroup Overlord got off to a roaring start. We had three demo-games at the show, the first was GMG’s great Omaha Beach assault, the second was Neil Tew’s ‘When Chaos Reigned’ 28mm game, which won the best demo-game award for its superb pro-built terrain and fantastic pro-painted miniatures (by Troop of Shewe), and my own Inland from Utah game.

Here are a few shots of the game table. The light in the Excel hall is appalling for photos, and without a tripod I struggled to get many usable snaps. The midst of a big show isn’t the place to play games properly, but Andy and Russ gave it a go and got through four or five turns of action around the fictional village of Gref du Pont. Suffice to say here, the US airborne, supported by the arrival of a cavalry recce group (made up entirely of jeep teams, M8s and M5s) soon had the defending Fallschirmjager and counter-attacking Ersatz Panzer battlegroup (consisting of R-35s, some other French kit, and a whole Panzer III – like a Tiger on this battlefield!) in trouble.

The village itself was shelled by direct fire from the airborne's 75mm light howitzers and then 82mm mortars and the combined attack of infantry and M8 armoured cars saw the Fallschirmjager being overrun. They lost their sole 88 to a direct mortar hit in the first turn, and their Panhard AC to a stealthy bazooka team, as well as the panzer grenadier platoon commander’s 250, racing over the bridge on a quick recce into town, before it came to a sticky end thanks to a 37mm M5 Stuart’s gun (not something that can often be claimed). Even the much vaunted Nebelwerfer strike failed to do much damage to the main attack, and it was obvious the village must be surrendered as the US armour cars flanked it, heading for the bridge, and M5s were parked up the main street.

West of the bridge the airborne troops outpost on Hill 20, around the water tower, made a good fist of holding onto their isolated position, and the R-35s sent to remove them were no match for veteran troops in the hedges with bazookas. It was declared a solid win for the US, even in such a few turns. The important bridge could not be held.

Thanks to all those who came to say hello and see the game. Thanks to Andy and Russ to who freed me up to do the talking and field questions (and sight-see and shop). 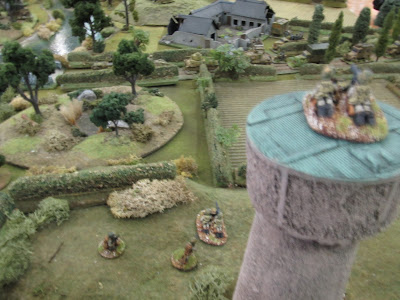 Hill 20, looking at the arrival of the not-so fearsome panzer column. 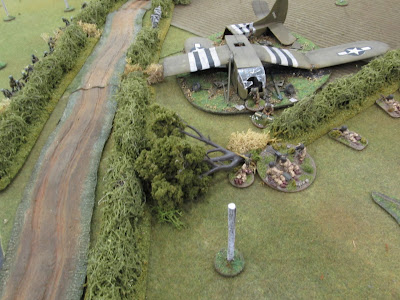 Crashed Waco, south of the village. Fallschirmjager are lurking behind the hedge not far away. 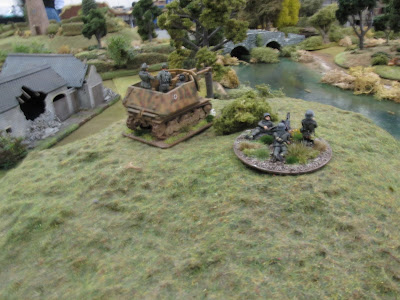 Long range 105mm HE fire from across the river prooved ineffective. 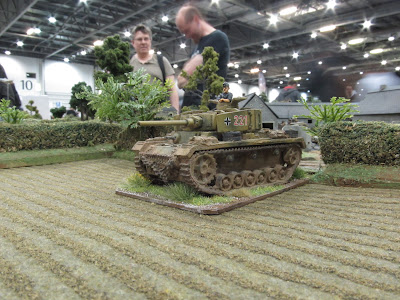 King of the battlefield, the sole Panzer III. It shelled Hill 20, with poor results. The German heavy mortar support harrassed the US attack, but again, it didn't help. 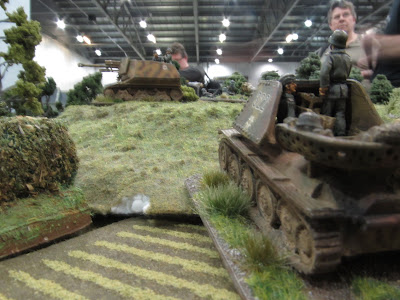 The ramshackle German armour. Marder I making for the high ground (it didn't make it). 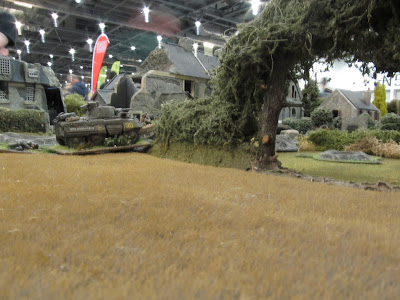 An M8 braves 37mm anti-tank gun fire on the edges of the village. A duel it won. 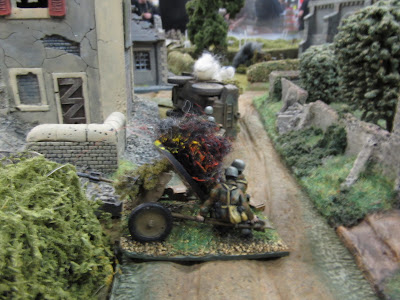 The Pak36 pinned by MG fire from the M8. Behind it, the smoking Panhard AC lies on its side after a bazooka shell from a skulking airborne team caught it unwares.
Posted by Warwick at 07:15