A new addition to my Russian Tank Corps are six T-70s, from PSC. I already have 6 in the battelgroup, which are old metal models from SHQ which I've never been that happy with. When they arrived they were very poorly moulded, and the glue and paint has always refused to stick to them very well, their track units constantly drop off. So, I decided these poor battered tanks have seen enough battles, and the PSC plastic one is a far better kit, so I've upgraded. The old 6 will go into deep reserve for the day I need 12 T-70s for a battle (one I need badly to lose no doubt).

Anyhow, my painting time is restricted, so I thought I'd do all six tanks together, in a production line, and try and take as many short cuts as possible to get a respectable final result. Mass producing Russian stuff is the only way to do it. Time to get artistically sloppy...

Here are the stage-by-stage photos, post the big build, which took me one evening (about 2.5 hours) of furious action with the plastic cement, clippers and scalpel, to have six small tanks ready for painting. 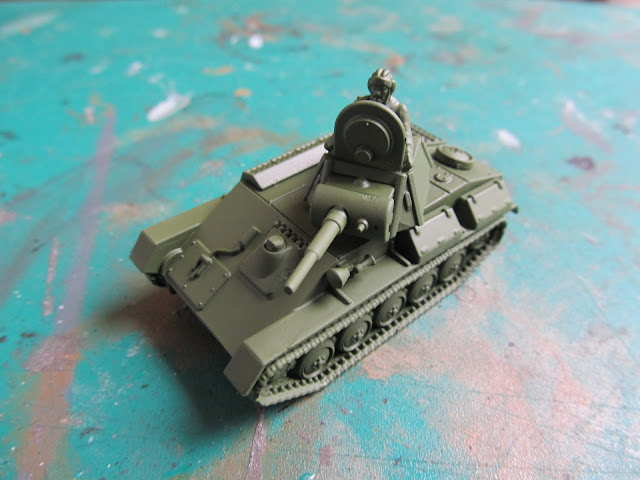 Undercoated in dark green spray. PSC are doing a new range which are very nice. 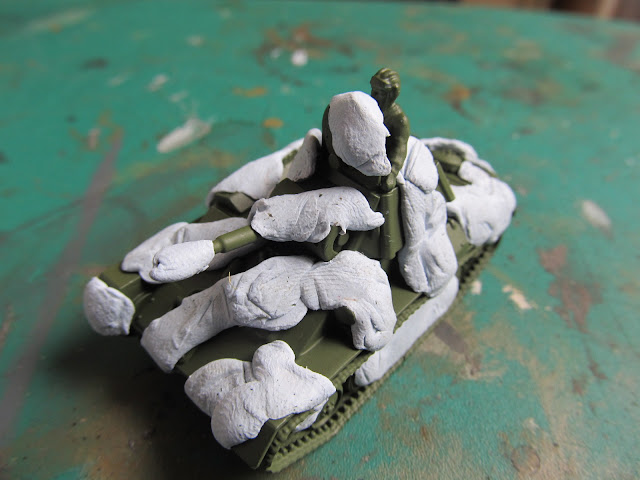 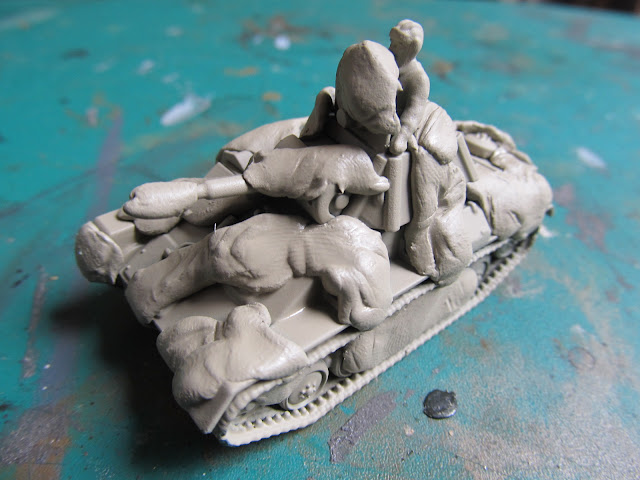 Oversprayed with light brown. This is actually Halford's khaki. 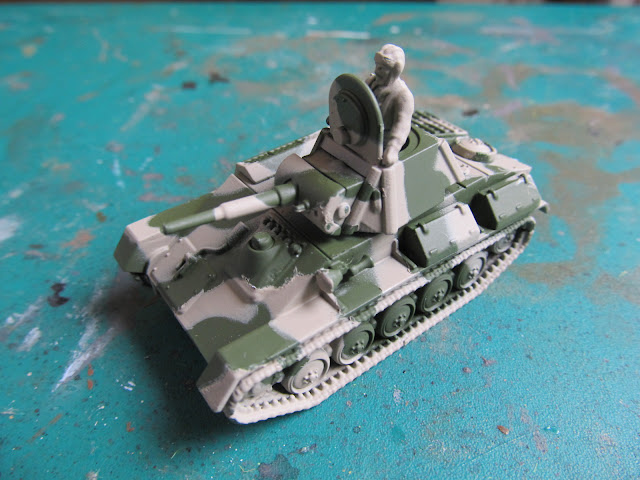 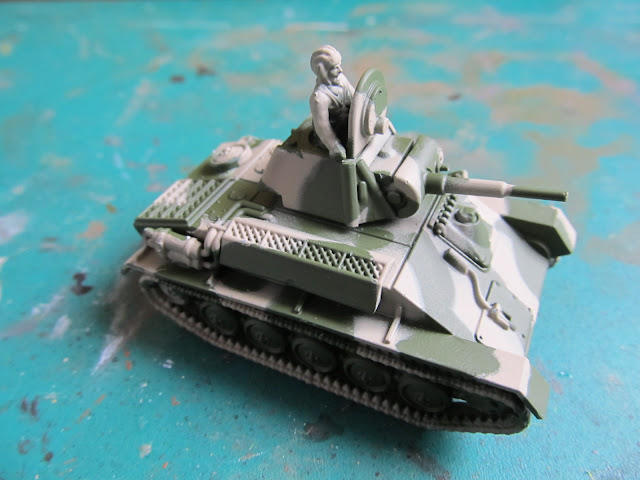 On the other side. 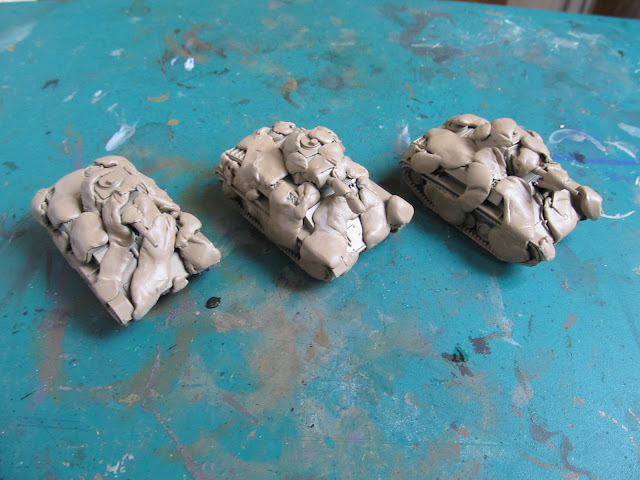 Three others, in a similar state, all sprayed together. 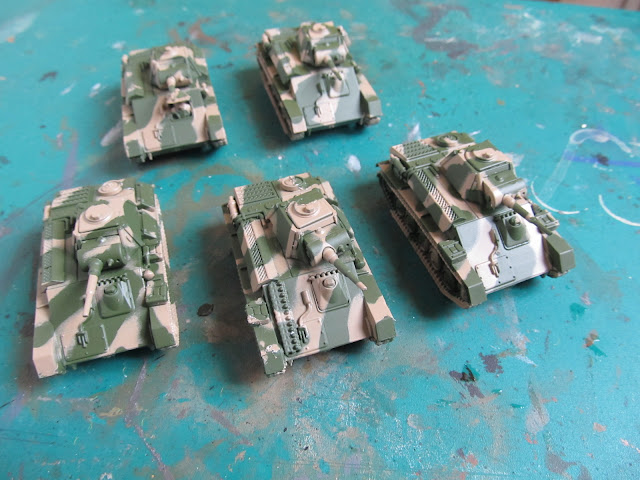 Five of the six with their basic camouflage. 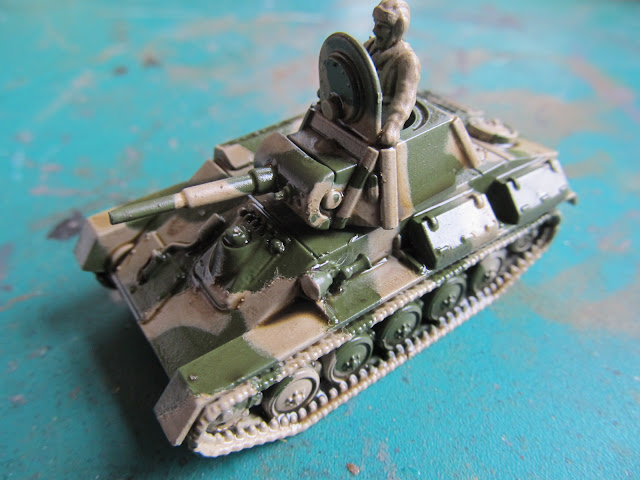 A heavy wash of black and brown all over. 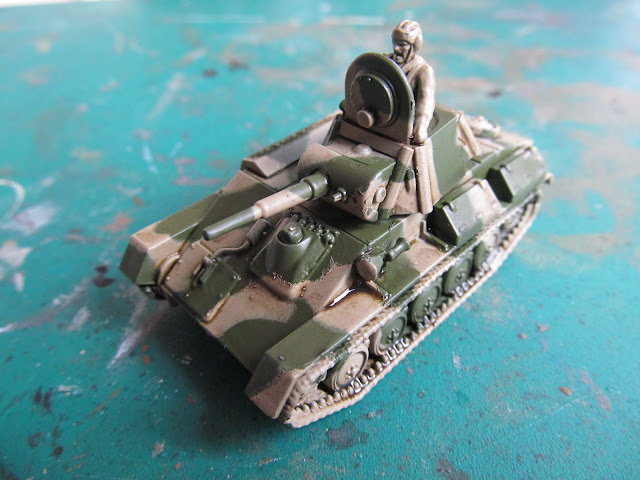 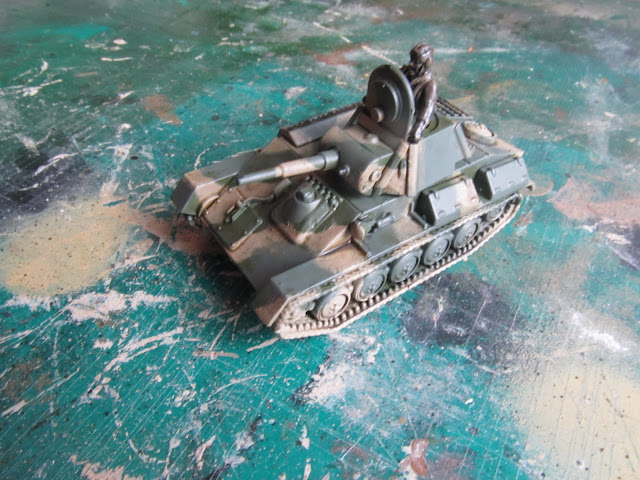 First overpaint, a mix of Vallejo German Uniform Green, Russian Uniform and a small amount of Grey/Black. It was scrubbed on to the green areas with a rough dry brush. Not much piant on the brush means it begins to feather at the edges of the brown areas. The crewman was painted dark brown all over. 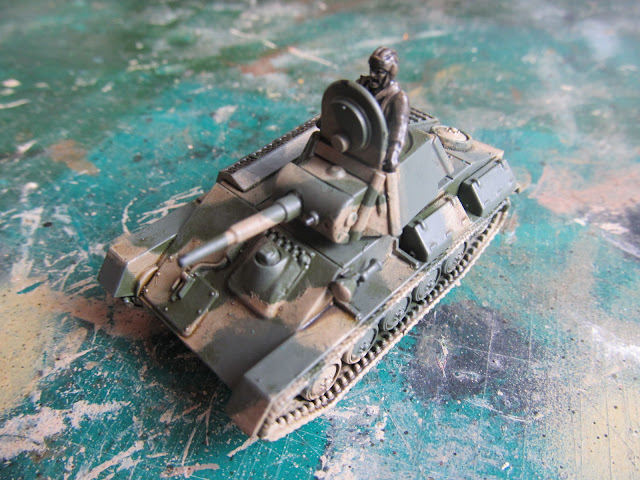 Lightening the green colour for highlighting and again scrubbed into the centre of the larger areas of green. No careful painting here, just quickly scrubbing away with a very tatty brush. 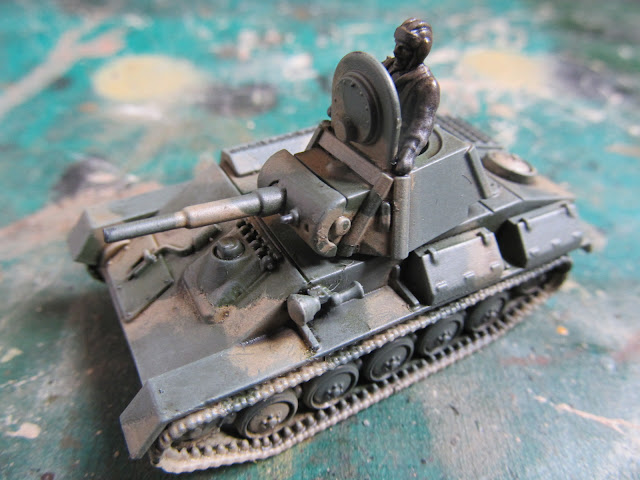 Up close after the final highlights. The basic green mix has some light grey added for this. 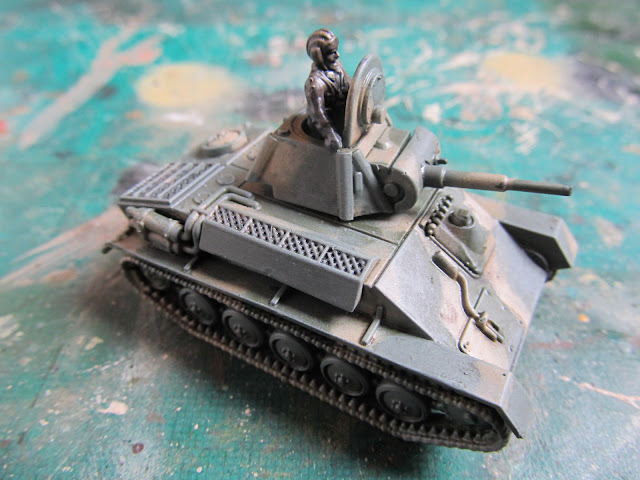 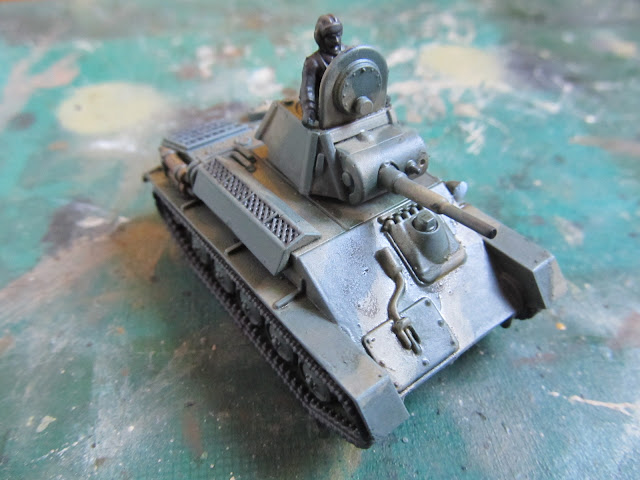 Black washes applied to air intake and engine grills, and around the wheels, hatches, crewman and working parts. Also pianted the exhaust cowling a browny/orange. 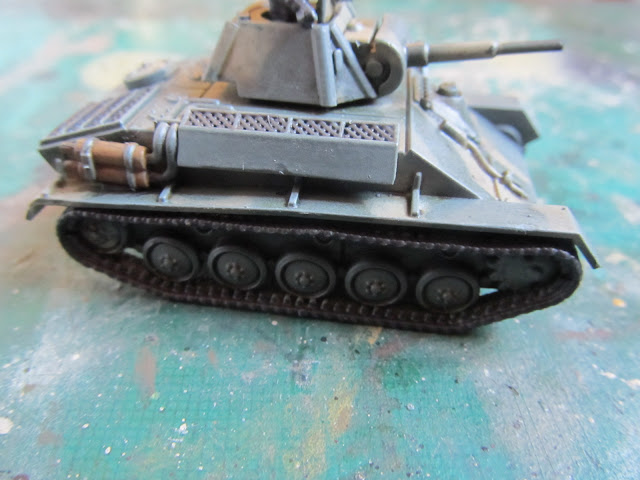 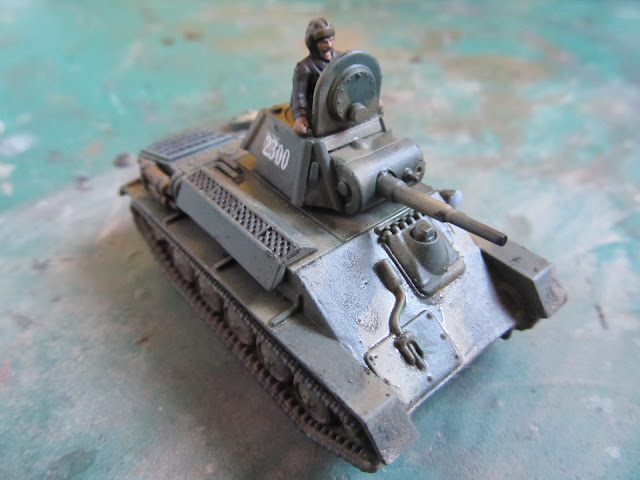 Second details. Painted the crewman, gun muzzle, machine gun, and added decal to the turret. Chips were added with a tiny piece of sponge (torn from a washing up pad - the scourer side), quickly dabbing on very dark brown, fairly randomly, but not too much. MiG pigments then added over the running gear and lower hull. Just brushed it on and blew the excess away. 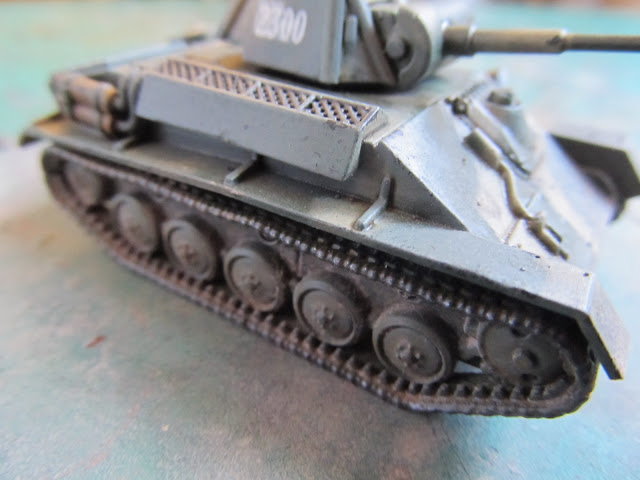 Pigments were then sealed with a quick spray of Pigment sealer. Done. 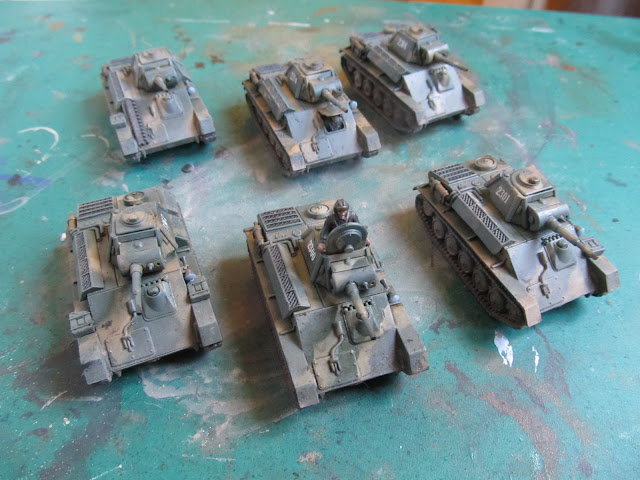 Both light tank platoons complete and ready for action.

In all, these six took me 11 man hours (not including build time). Less than 2 hours per tank, they won't win awards but they won't disgrace any battlefield. It was fast and dirty, but the production line got them done... and a finished model is far superior to any 'yet to be built' future plans. As a experiment in mass production I enjoyed it. Three evenings enjoyable work for a lifetime of gaming entertainment is a bargain.

Now to set them loose against the Germans...which is when the problems start!