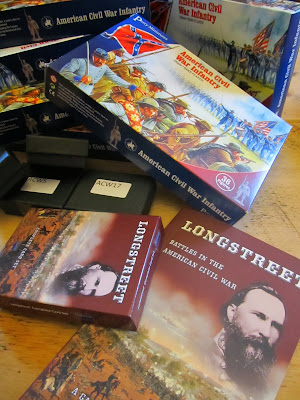 A lot of plastic, 6 Perry ACW infatry boxes, plus 3 guns and some officers.

It has been 6 or 7 years since I last decided to begin a completely new period for my wargaming, so it’s about time. I have so much WW2 stuff that it becomes increasingly hard to find stuff to add to it, although you can always find something, it’s only a few models here and there, rather than any substantial project.
I have always planned to be able to play in various historical periods. I have my ancients/medieval period covered (Crusades) and I have my modern with WW2, but I have nothing for horse and musket. I haven’t played horse and musket wargames regularly since I was about 11 years old, playing Napoleonics with 1.72nd Airfix plastics using Charles S Grant’s rules (photocopied in the local library). It was my formative period of tabletop wargaming, and the games never got finished, but I find my interest returning, in a nostalgic kind of way. It also helps that I have a willing opponent.

So, the first half of 2014 will see a brand new big project get underway, American Civil War in 28mm. I have literal nothing... not a miniature, not a piece of terrain (beyond the generic stuff), no rules, etc. So from scratch my opponent and I have decided on Longstreet (based on good experiences with Maurice). I got choice of sides and went for the boys in blue. Years ago I did a few years re-enacting ACW (and great fun it was), and fought with the Union, so it seemed only right to continue fighting for Yankees, despite the romantic draw of the Confederate underdogs. I’m always drawn to the ‘standard’ troops and like games were it is the rank and file that decide the outcome of battles rather than the vaunted elites and ‘best’ troops, which are always so popular (too popular) on wargaming tables and in rules. For me, these rare units should only add character, not dominate the tabletop. ACW appeals because those units just don’t really feature... neither side has their game winning elites, they are basically the same army, full of ‘bland’ rank and file... no Guards heavy cavalry or elite armoured SS to worry about, just men in blue vs men in grey, with slight wrinkles, but in end, neither side can call upon a game-winning banker. Victory is about what you do on the tabletop, not what you take in the army.

So, anyhow, Santa has delivered and the project is now underway. Our first ACW game is set for Easter, giving me a few months to get about 200 models painted. I have a big can of dark blue spray and a can of medium brown Army Painter ready, and will batch paint about 30 men at a time. It’s gonna get repetitive, but somehow I’m looking forward to that, especially with a hard deadline to aim for... and I can always break the blue monotony with a few WW2 tanks.

The first 40 men of the 18th Ohio are already well on the way.  Finishing an army like this is a case of stubborn will power, and avoiding too much rubbish TV. Just do something, every night and eventually, you finish.