This Sunday will see a group of 6 of us getting together in Stoke-on-Trent for a big Battlegroup: Fall of the Reich game, just for the fun of it.

I thought I'd post up the historical scenario we'll be using, with the game being set during Operation Blockbuster in March 1945. It will be 3 players a-side, 1,500 pts per side, Canadian armour vs a hodge-podge of German units. Anyway, a full After Action Report will follow here next week... it should be blast, and it's about time I was on the winning side in one of these big games. I have good feeling about this one... famous last words.

XANTENSTRABE COUNTER-ATTACK
- DURING OPERATION BLOCKBUSTER -
March 1st, 1945
Following the attritional success of Operation Veritable, in late February the Canadian 1st Army launched Operation Blockbuster to push on to the Rhine and capture the towns of Xanten  and then Wessel, where the Germans where holding an encircled and shrinking pocket around Wessel’s important Rhine bridge. Attacking from the south-west and south, the Canadian 1st Army found the Germans fighting hard in the Hochwald forest and progress was initially slow. On February 28th, the Canadian 4th Armoured Division captured the village of Sonsberg (south of Xanten) and secured the main road north towards the town.

With Xanten as the key to holding their bridgehead, the Germans have gathered a scratch force and launched a counter-attack to stall the Canadian advance, buying time for a planned retreat over the Rhine and deny the enemy easy use of the main road - the XantenstraBe. This counter-attack used any forces available from those trapped within the Wessel pocket and holding Xanten itself including: 116th Panzer Division, Kampfgruppe Hausser (detached from the Panzer Lehr Division), 8th Fallschirmjager and 180th Infantry Divisions (all already badly mauled in the previous Operation Veritable fighting).

This game recreates the fighting around an important crossroads on the XantenstraBe between Xanten and Sonsberg. Here the German attack had to negotiate the overgrown Hohe-Ley drainage ditch before encountering 4th Canadian Armoured Division’s forces holding the road and preparing to move north against Xanten itself.

Terrain:
This is the Holland/German border, it is flat and quite open. The XantenstraBe crossroads is towards the northwest corner, next to it are a few buildings, an orchard and a bombed out farm. Another bombed out farm lies midway across the table near the northern table edge. There are a few areas of woods towards the south of the table and on the southern edge. The Hohe-Ley ditch runs north south along the eastern table edge.  The rest of the table is soggy, open fields. 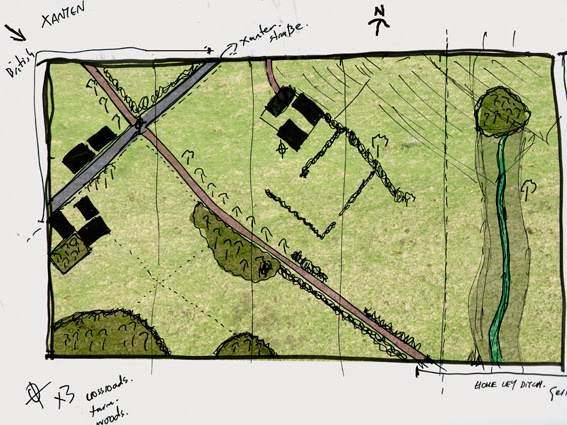 Weather: The weather is grey and overcast with occasional heavy showers. If an air attack counter is drawn and an aircraft arrives, re-roll the dice. The second result stands.  Timed air strikes can still be used.

Ground Conditions: The ground is saturated, soft and very muddy. Off road movement by wheeled vehicles is reduced by a D6”. Tracked vehicles are not affected.

British Forces:
Representing units of 4th Canadian Armoured Division. Each player selects 500 pts using the British 1945 army list. No Churchill or Comet tanks can be taken (they didn’t have any). All players may take a maximum of 1 Restricted unit each. No player should take a Forward HQ, Forward Signals unit or Forward Air Controller, as these are automatically present and cost 0 pts. (Bring models for them though). No defences can be taken.

German Forces:
A mixed kampfgruppe of the remains of various divisions in the Xanten area. Each player selects 500 pts using the Defenders of the Reich army list. No Tiger tanks can be taken (none were present). All three players may take a maximum of 1 Restricted unit each. No player should take a Forward HQ or Forward Signals unit, as these are automatically present and cost 0 pts. (Bring models for them though). No defences can be taken.

Objectives: There are three objectives on the tabletop: the crossroads on the XantenstraBe, a farm complex and a woods near  the centre of the table.

First Turn: Roll a D6 and add each side’s total number of Scout units, the side with the highest total takes first turn.