Back at Christmas (seemingly last week) I began my big project for 2014, 28mm ACW to play Longstreet. With the deadline set for the first game at Easter, on April 15th actually, time is running tight.

But, I’m well on the way to completion! This has been great fun... daunting at first, but once I got on a roll with the painting I was away. Working in batches of 20-30 models at a time, I have been steaming along on weekday evenings, taking every short cut I could think of to get them done. For the last week or so I have been basing like mad, and now the first part of my brigade is ready to join the rest of the Army of the Potomac. Here they are, I’m stoked to get their first battle in and blood them. My opponent is almost ready too, although he has a bit more infantry than me, he only has 2 cannons so far. 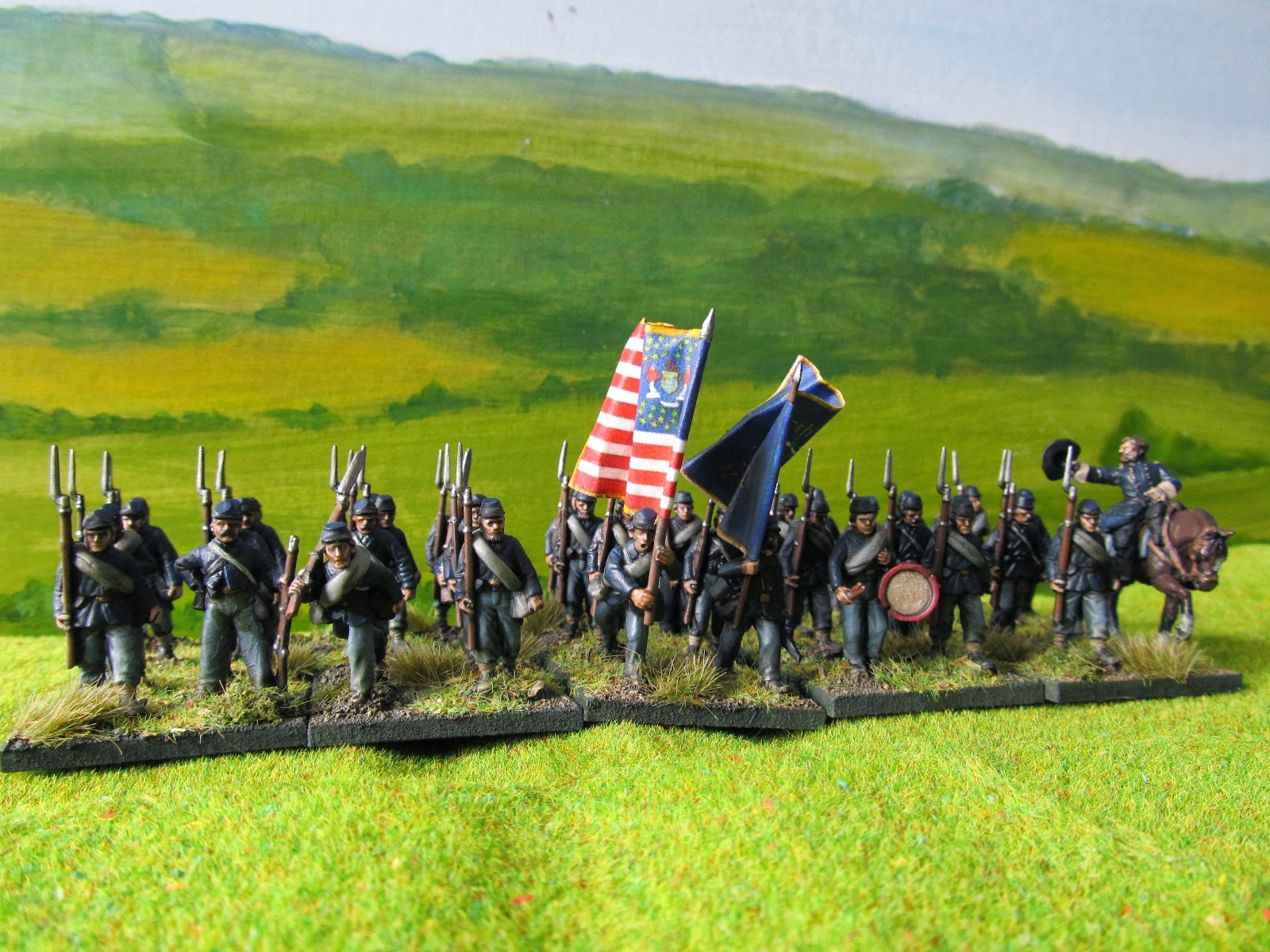 The farm boys of the 17th Ohio, on the march to Richmond. 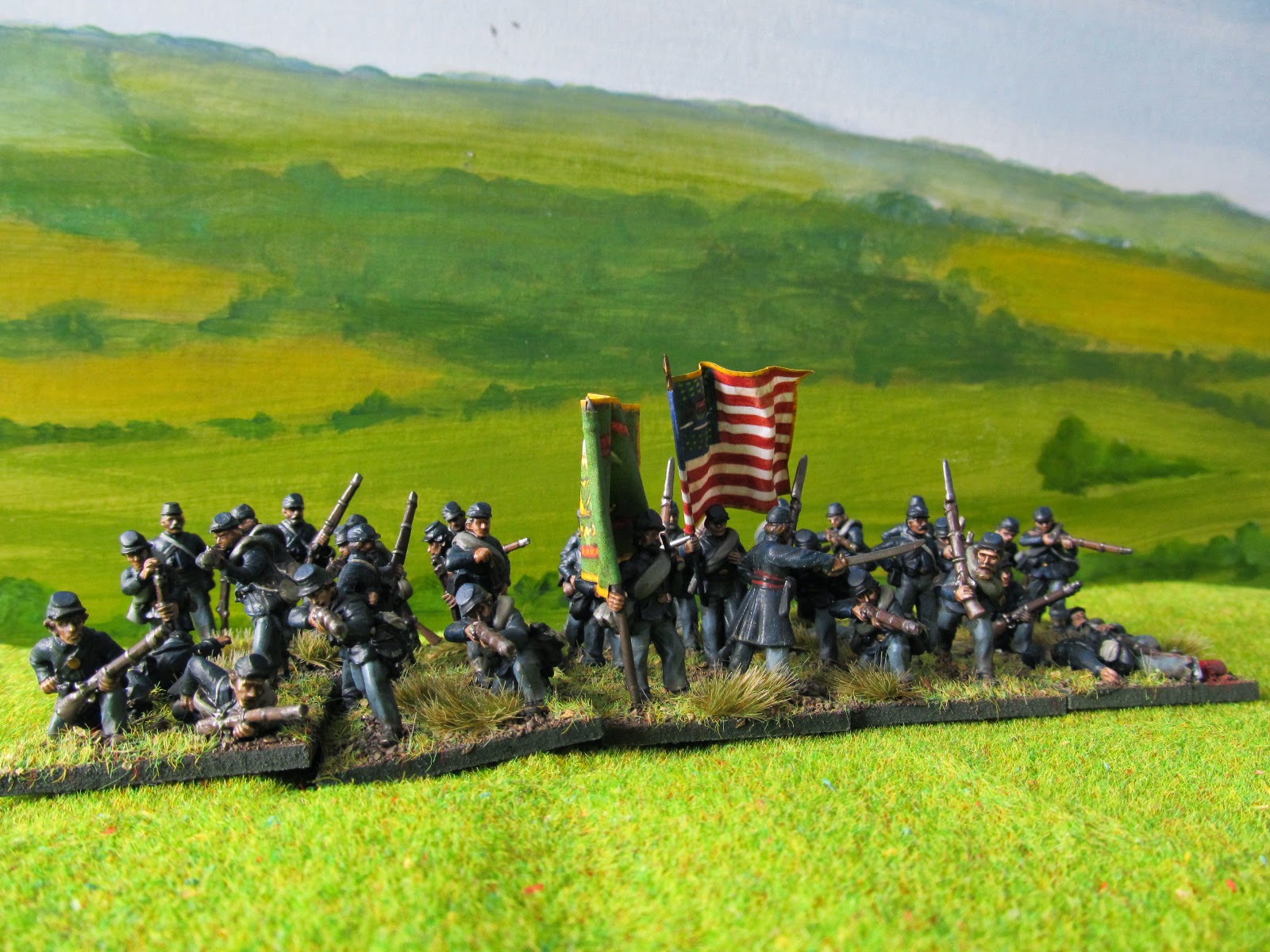 The new immigrants of the 37th New York, the Irish Rifles, in the thick of the action. 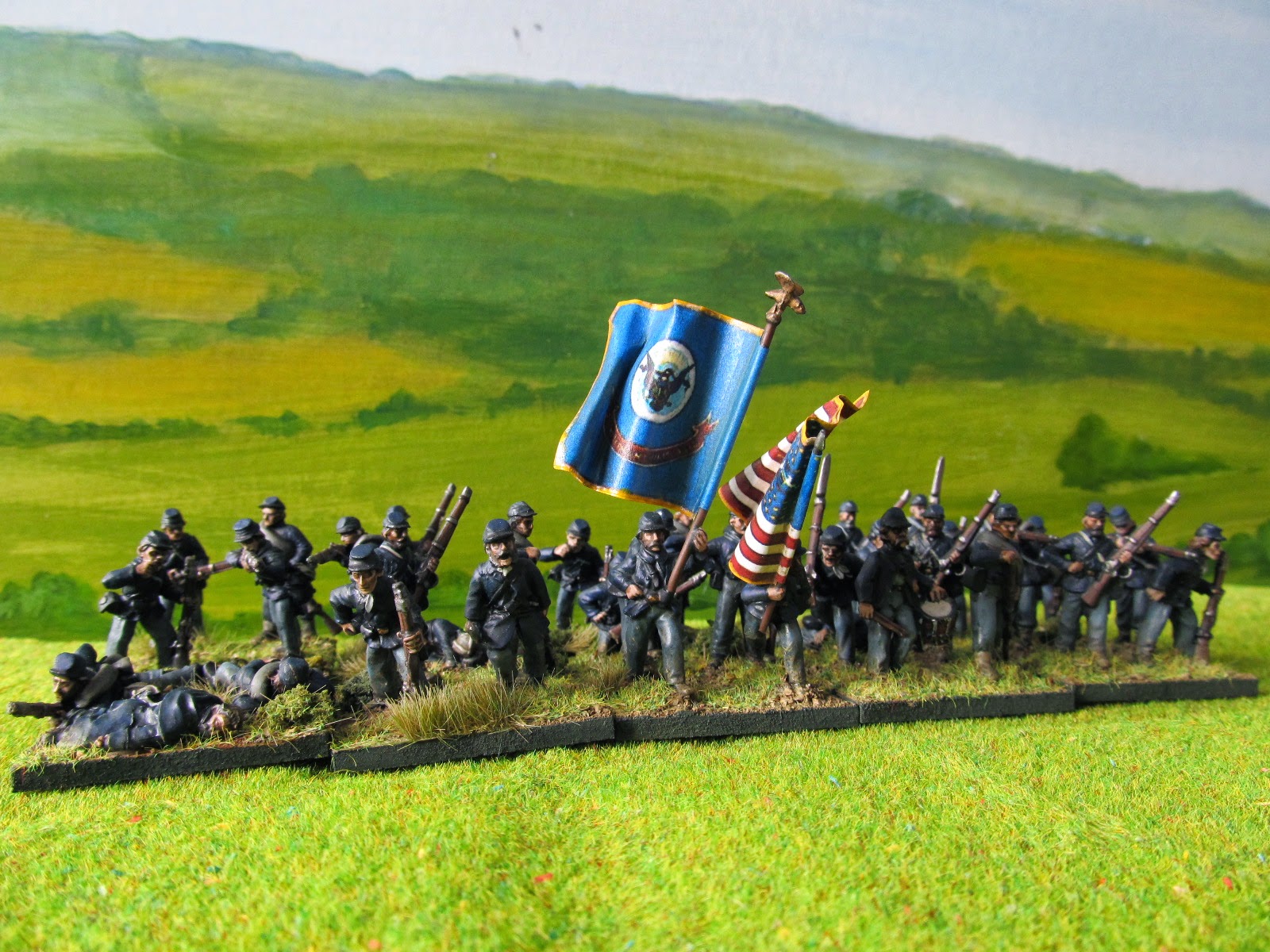 The 2nd Pennsylvania, a bit shot-up. 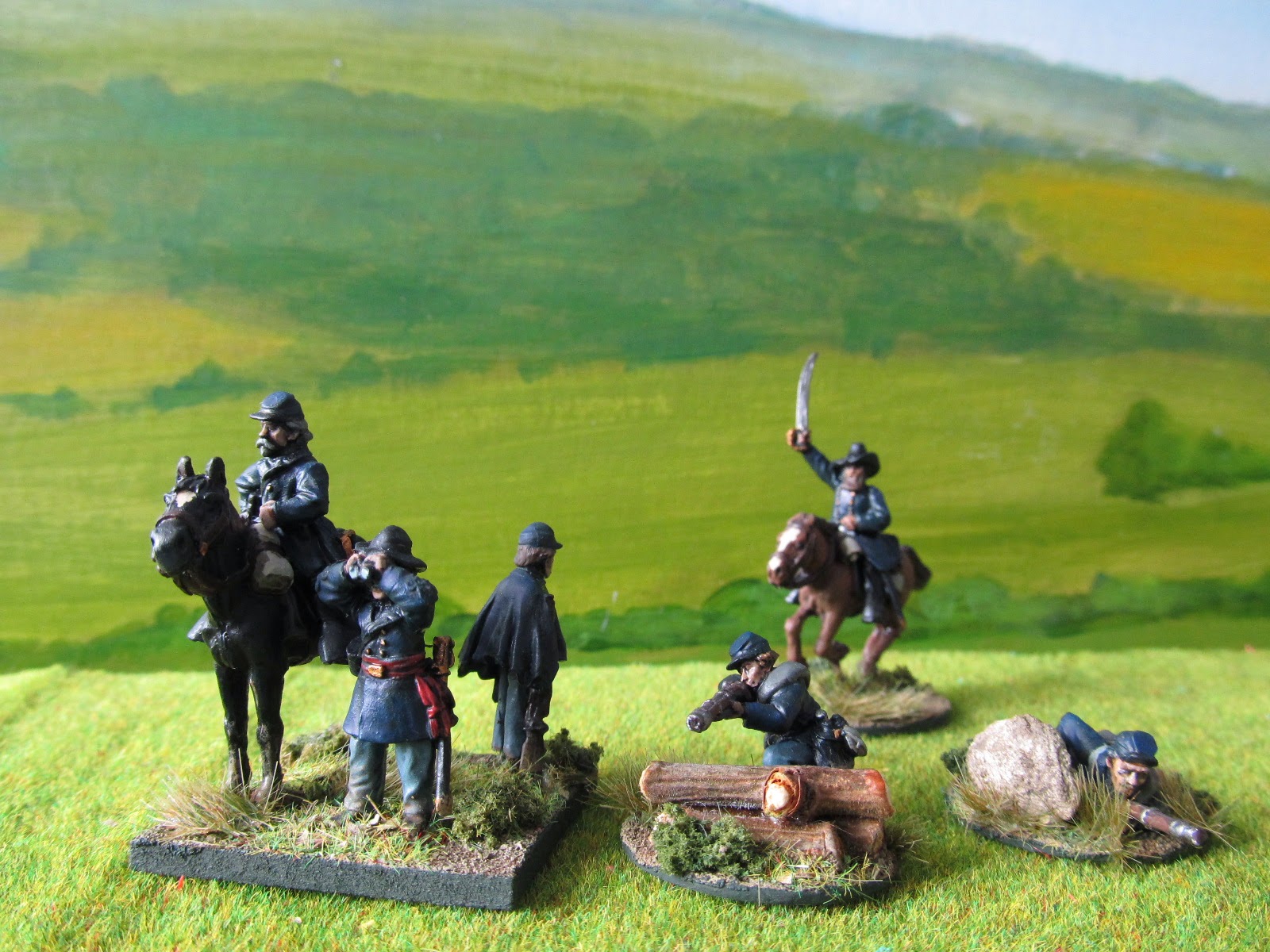 Lt Colonel William Arthur Samuals, ‘Fightin’ Billy’, on his horse Thunder. Not strictly needed for the game but I wanted something to be me on the tabletop. Also, 2 sharpshooter markers and a hero marker, should I need them. 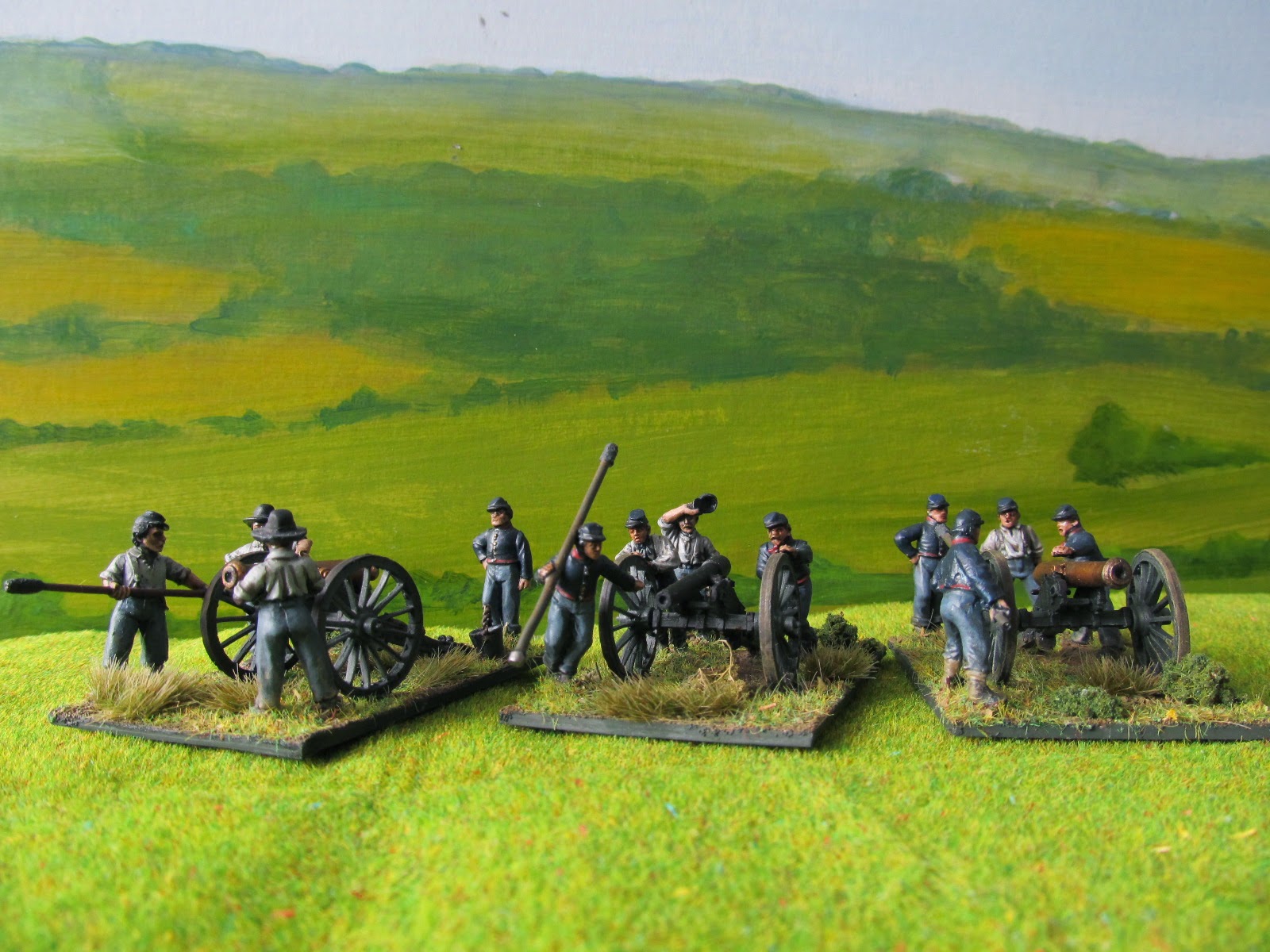 4th New York Artillery. Gun barrels remain unattached and swappable for anything I need. Still got to do their limbers. 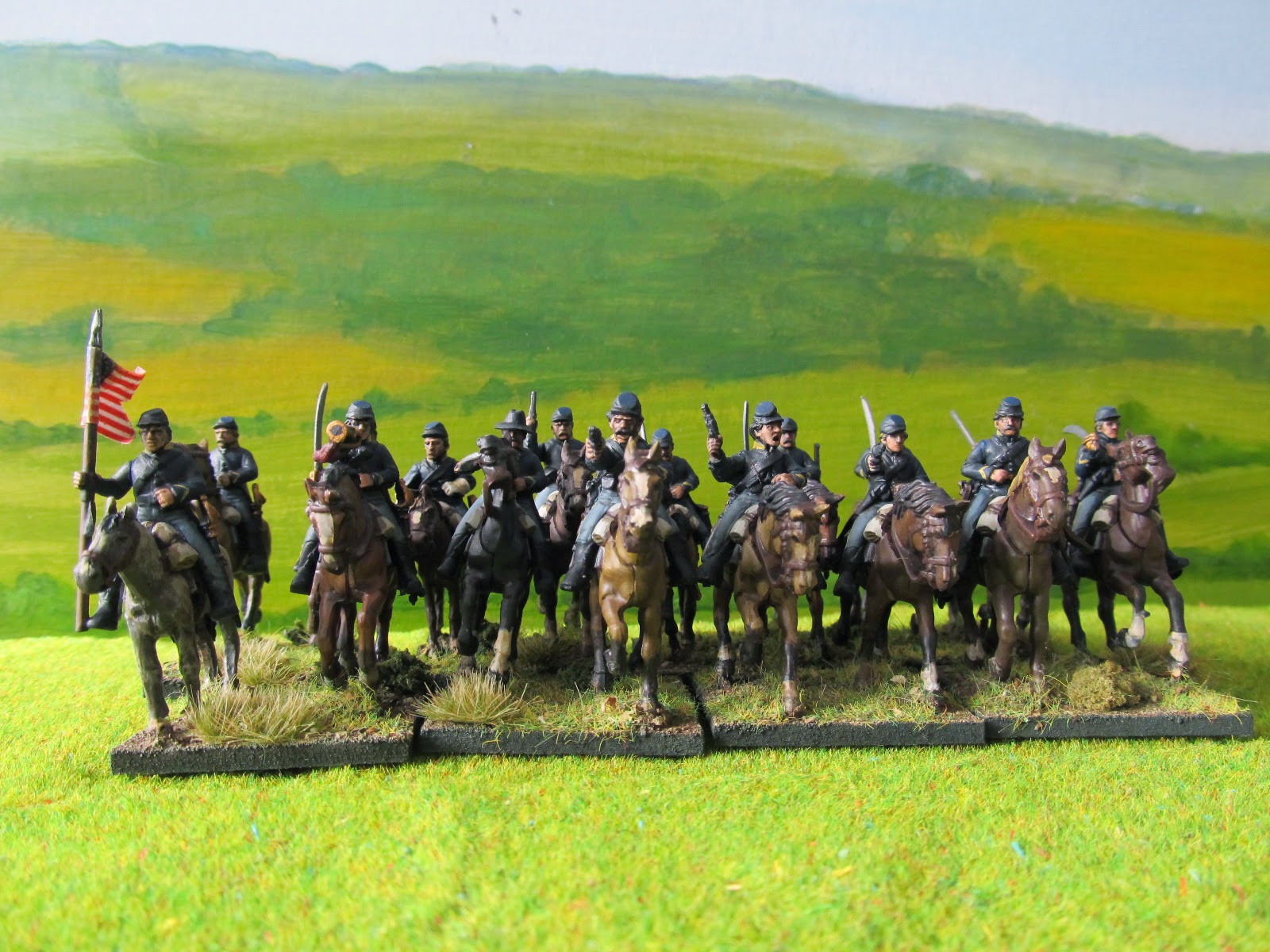 Still on the paining tray are the last 15 men of the 87th New York, the other 25 are complete. That’ll be my fourth 10 base infantry regiment.Beyond this, well, I have all I need for game 1, but I want my cavalry dismounted as well, and probably three more guns, and then a coloured infantry regiment for later in the war. That should about do it.

All miniatures are Perry plastics and Foundry metals mixed in. Coats and hats in Valejo Dark Sea Blue (over black), highlighted with Dark Prussian Blue and trouser in Luftwaffe Field Blue. After all that blue, its time to get back to dirty green and brown-grey for some WW2 tanks.
Posted by Warwick at 06:42