Over the past weeks my Longstreet Grand Campaign has continued, we have now reached battle 7, from 9. The last two games have both been Confederate victories, one a sound thrashing after being overwhelmed by determined Reb cavalry, then a very close game in which my assault up Mortuary Ridge was only just repelled by the Rebs, one more turn and I would have had it (how often do you say that in gaming?). The campaign now sits at 3 Union wins to 4 Confederate, so I have my work cut out in the last two battles.

Both were fantastic games, the Longstreet rules system just doesn't allow for a dull game and the campaign system continues to delight. More photos will follow soon from Games 6 and 7, but for now this one will have to do. It's a bit of fun in Photoshop on a friday afternoon, but, like everybody, I'm a fan of Don Trioani and I was wondering if you could make my miniatures look like his piantings (they inspired painting them anyway).

The answer is, of course, no, but I've given it a shot anyway. Here, as the sun rises,  Lt Colonel 'Fightin' Billy' Arthur Samuals (on his trusty horse Thunder) watches over the advance of the 17th Ohio Volunteers at the Assault on Mortuary Ridge. Enjoy. 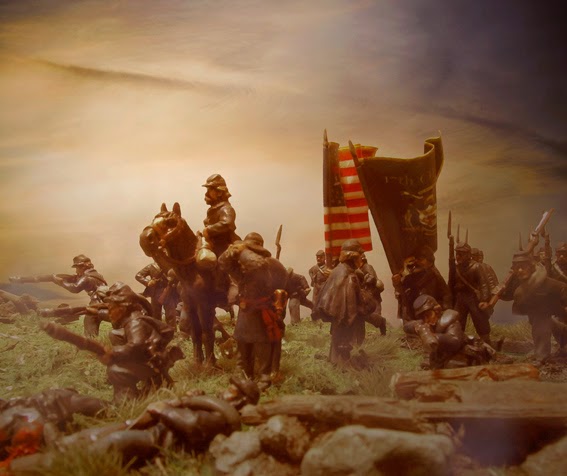