The blog has been sadly neglected for a while, so I thought it was time to get back on it. Stuff has been happening, wargames have been played, models have been painted, but there just hasn’t been the time to do all the faffing round uploading stuff.

So, this is an attempt to catch-up a bit.

Here is some shots of last weekend’s Crusades game. This was a large play-test game for my own rules, which I’ve been working on (on and off) for the past year. I had hoped to get them finished this year but it seems things have conspired against me, so 2015 will be the year they hopefully finally see the light of day.

Called ‘Soldiers of God’, they use a card driven action system to create a very different kind of battle. It might look the same as most wargames (ie there is a tabletop with miniatures on it, with units facing each other). But, what happens from turn to turn is far more nuanced than in the standard ‘i-go, u-go’. The cards provide a lovely level of ‘dis-control’ (my term for it) but in this system you also have a overall battle plan, pre-chosen before the game, which you can control (like whether to attack on the left, right or centre), but then how that battle plan actually happens is more random. The system has had some very good testing of late and is coming on well. It’s is almost there and this battle proved an excellent run-out for two new players. A big game and it lasted 3.5 hours, from scratch, which is good going.

More information will follow, but for now enjoy the game pics and write-up. 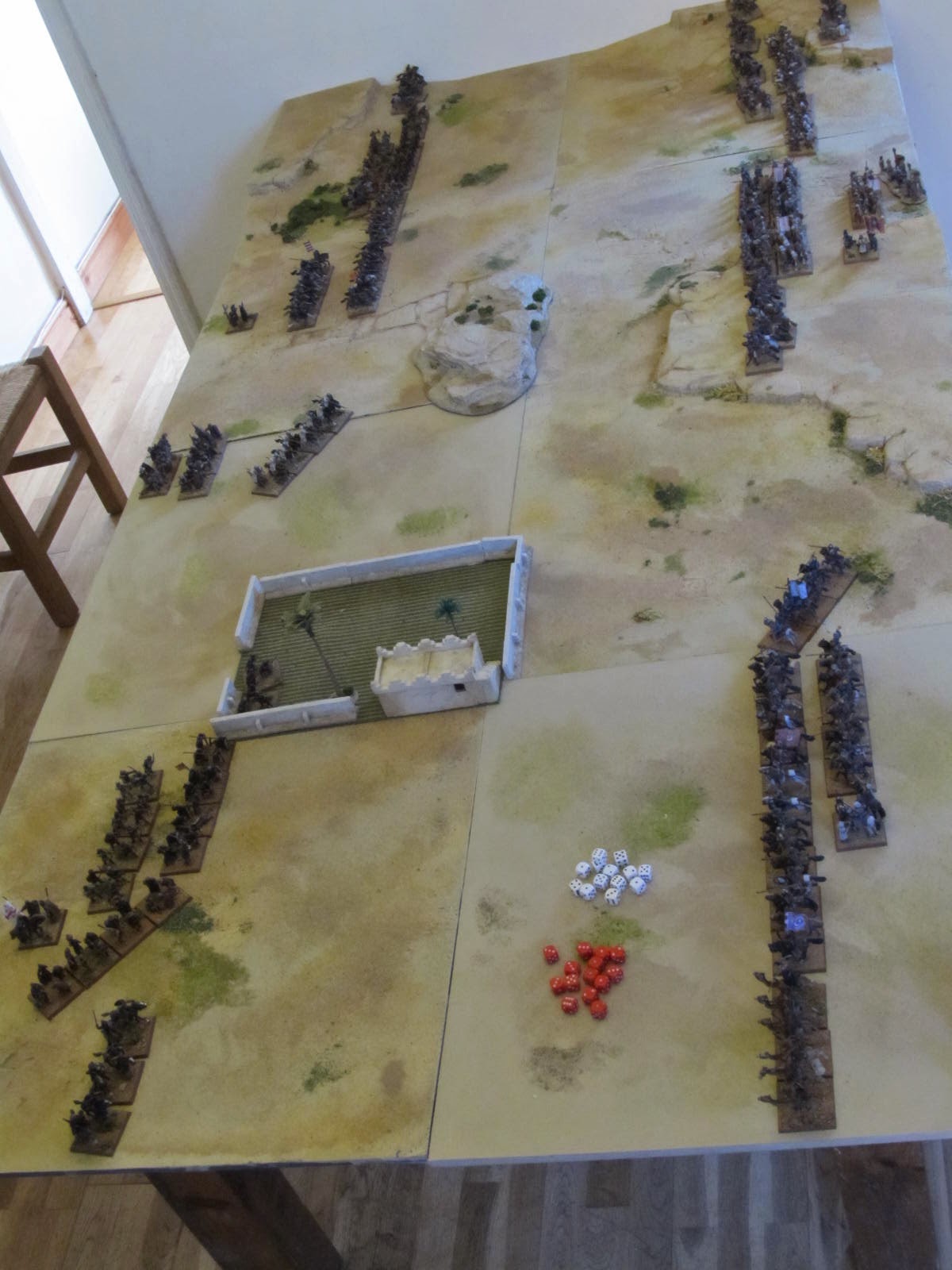 The forces arrayed across Wadi Az-Azua. On the left is the Army of Kingdom of the Jerusalem, complete with the True Cross for moral (morale) support. On the right, Saladin’s saracen host, from foreground to rear, cavalry wing, infantry centre and skirmishers.

The Crusader's chosen battle plan was for an all out attack, with the main strike in the centre, by the mounted knights (of course), looking to smash home and win the day in a short sharp shock charge. Unfortunately, the rocky outcrop was in the way so they'd have to go-round (random terrain generator threw this up). The knights would be supported by steady infantry attacks on the left and right. A very aggressive plan (the game includes about 8 options), the Franks wouldn’t be messing about but getting stuck-in.

On the opposite side the Saracen's battle plan was also aggressive, conducting their own cavalry attack on their left with their Ghulams led by the Al-Halqa royal bodyguard cavalry (elite heavy cavalry), supported by an infantry advance in the centre. Their right flank would be 'refused', with only light skirmishing horse archer and light foot archers to hold it whilst their cavalry swept round.

The scene was set, with both sides looking to go on the attack, it was going to a bloody day at Wadi Az-Azua. 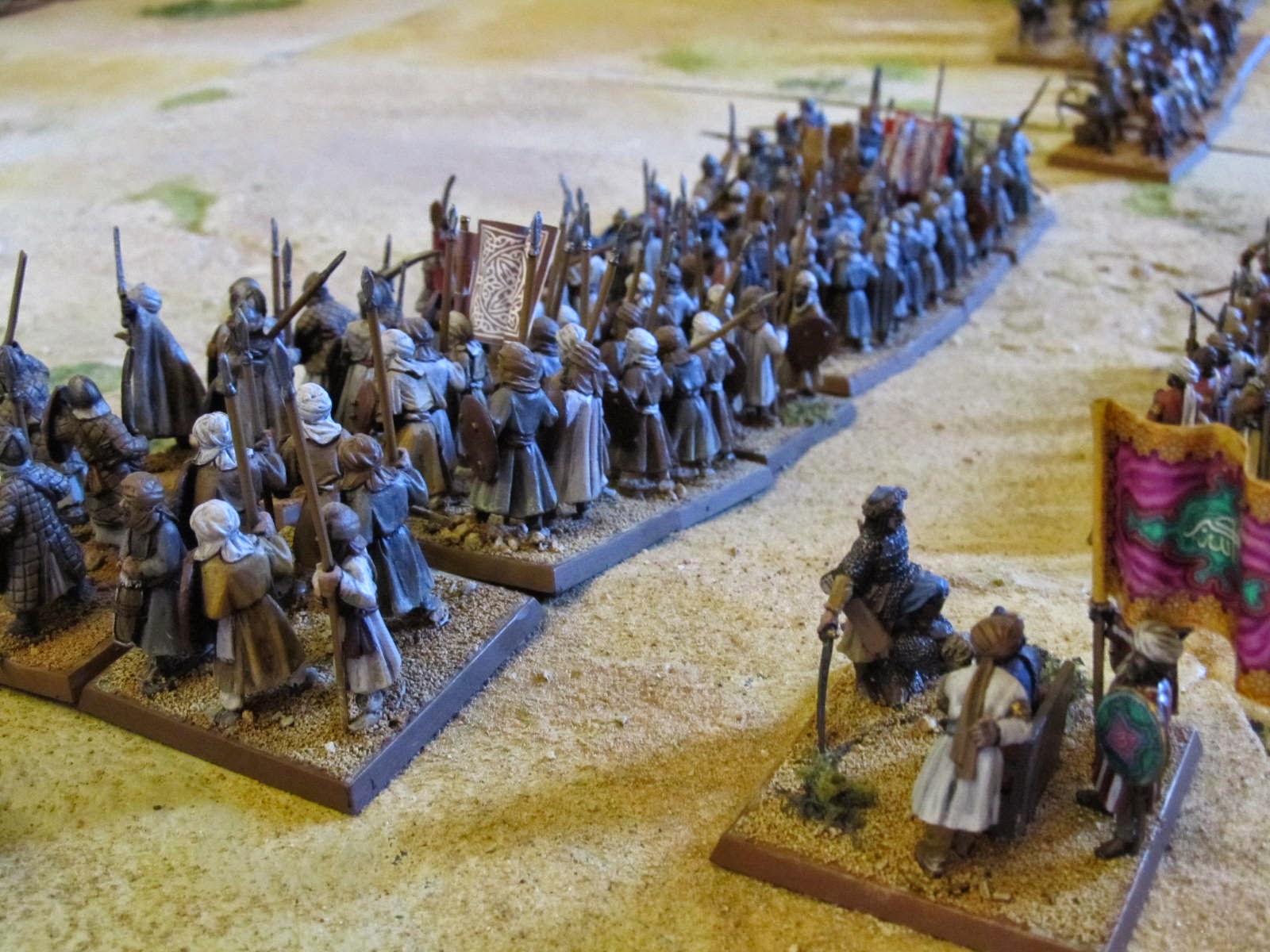 The Saracen's centre, all infantry, the back ranks being all poor militia units. The centre 'Battle's' command stand is in the foreground. Each side had 3 Battles in its army. 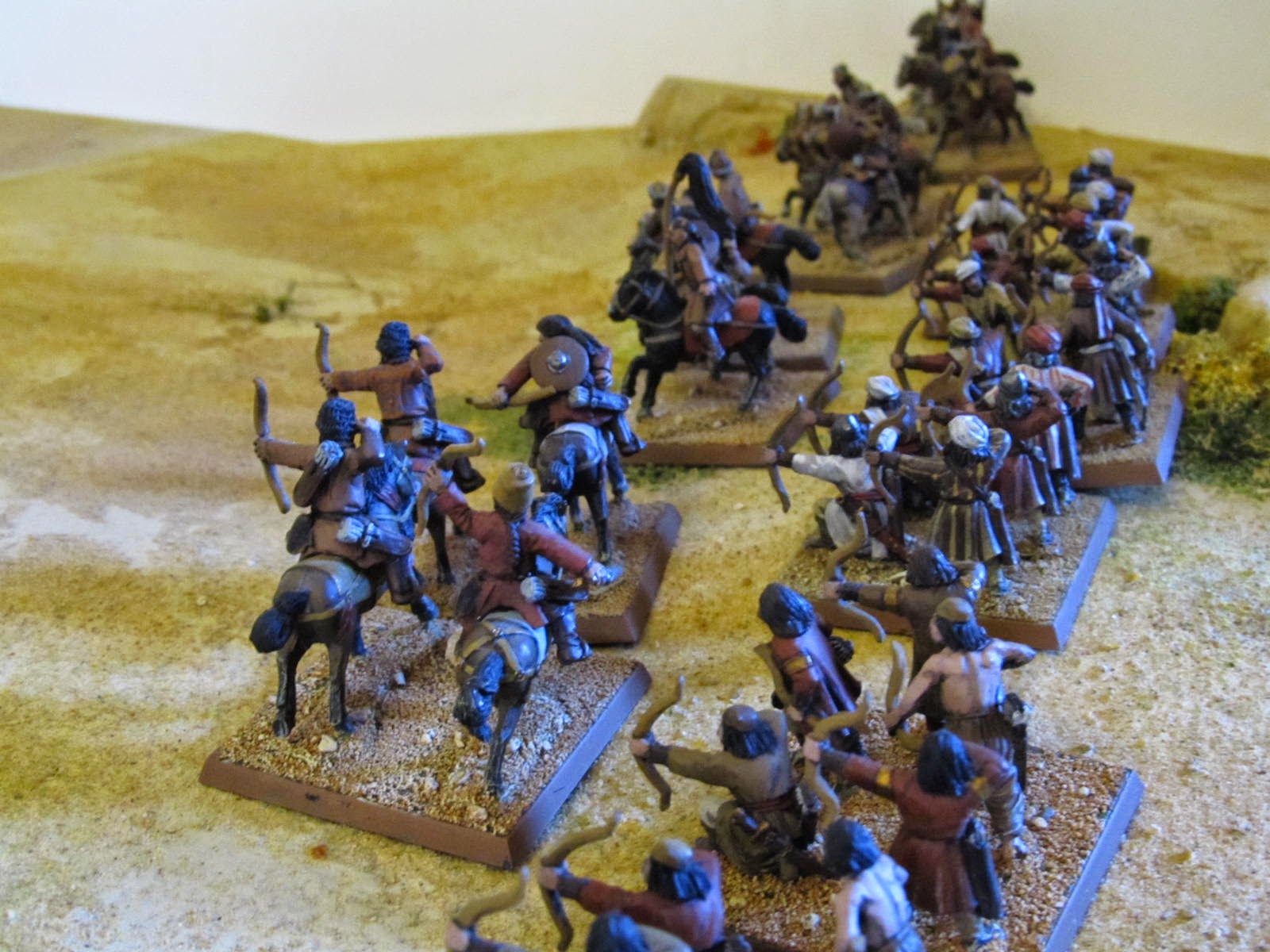 The Saracen skirmisher 'Battle' on the flank on the right, small units (2 stands) of horse archers and light archers. 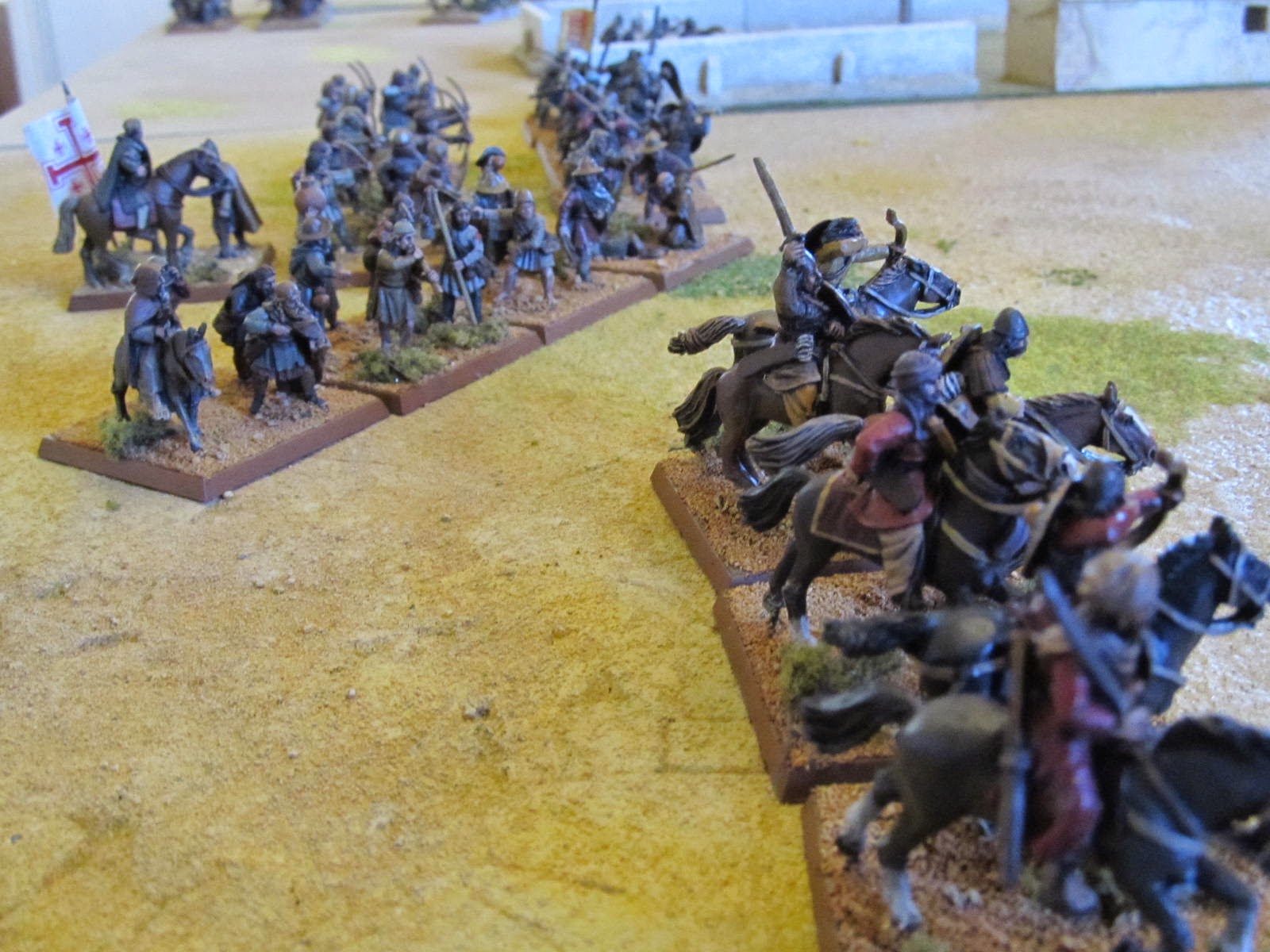 The Crusader's left, with armed pilgrims on the end of the line, with some Turcopole (local) light horse archers ready to rush forward and harass the enemy (but they got carried away and made a impetuous charge, which did not end well for them). 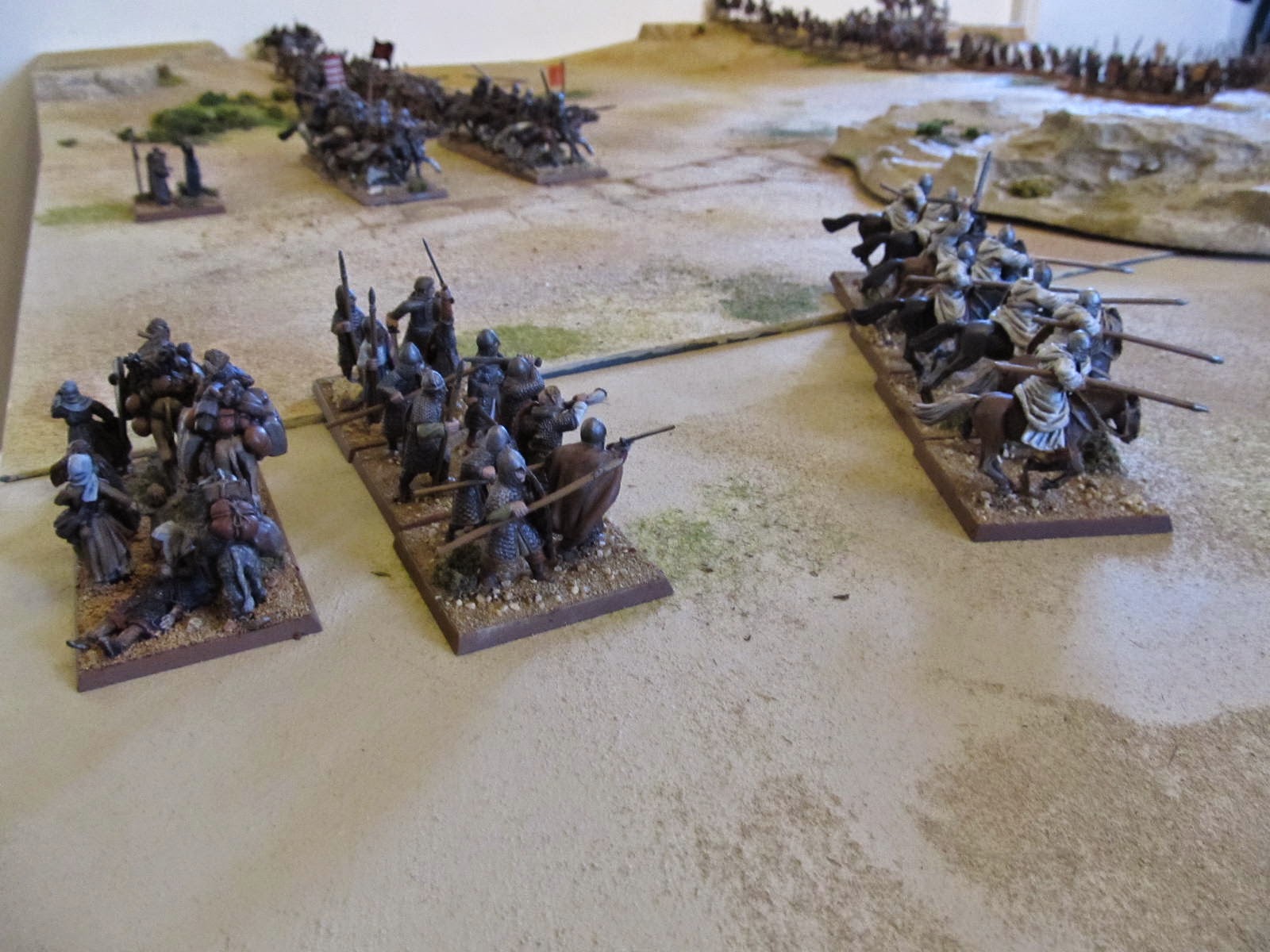 Crusader's centre, baggage train and guards, elite Templar heavy cavalry and beyond the secular knights. Behind them is the true cross, a one-off special command unit, useful, but an automatic loss if the enemy captures it ( and the Pope would be most unhappy). 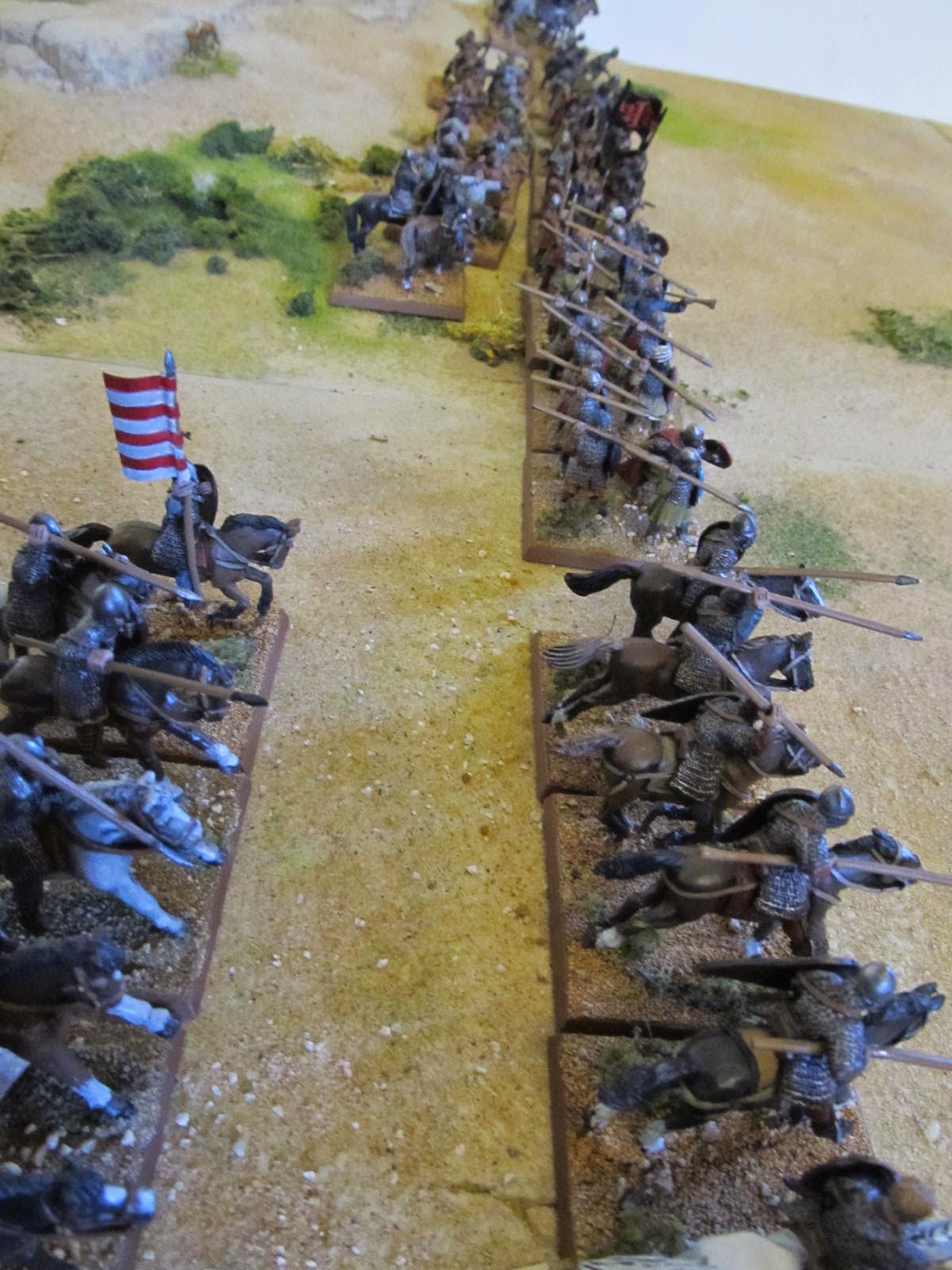 The knights strike force and Crusader's left flank infantry, including some Armenian allies. 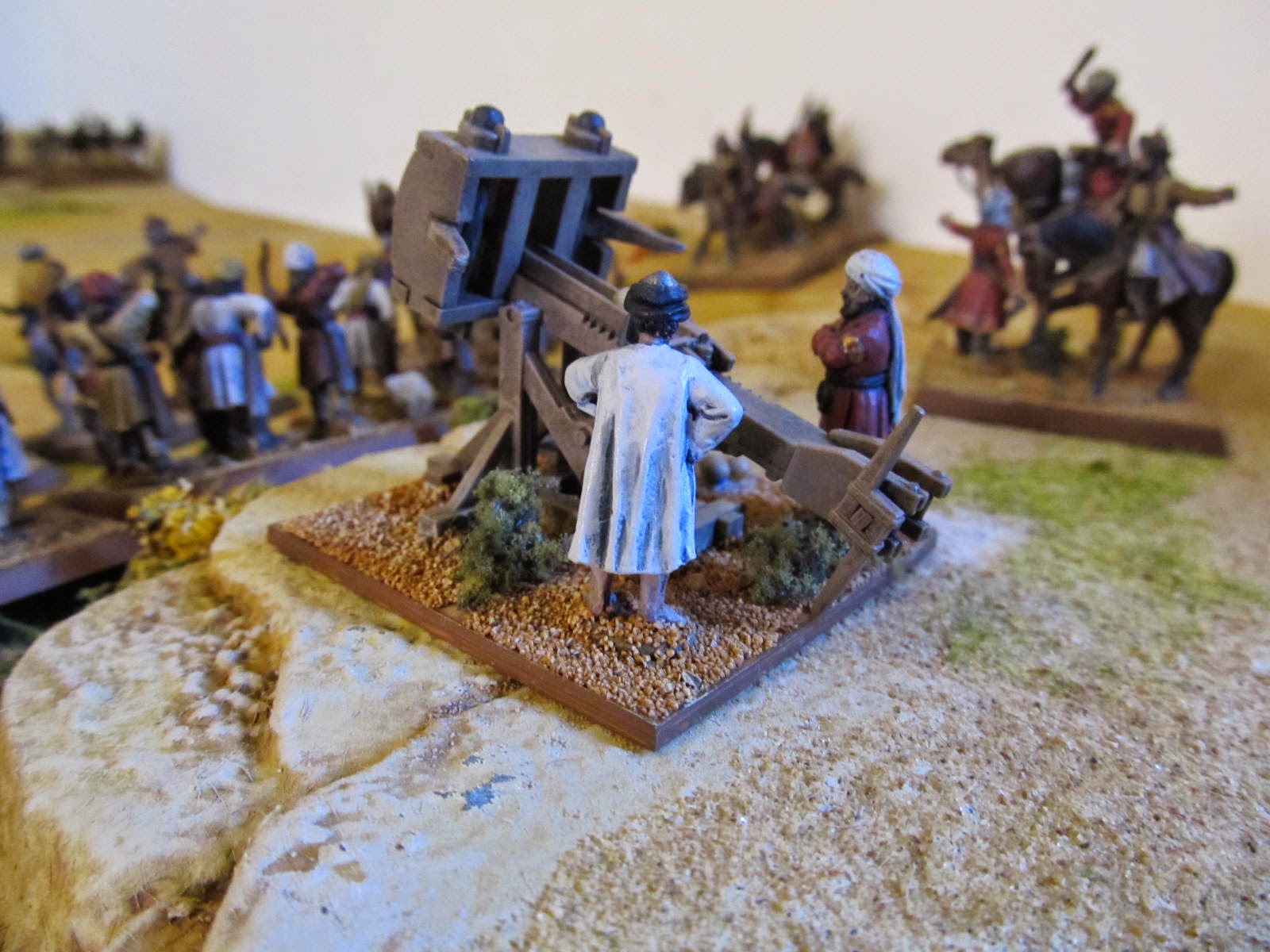 The battle progressed (and I stopped taking pictures to run it), but the Cruasders advance was rather slow. Their right never got going, with the massed Muslim cavalry closing too fast, winging arrows from horseback before charging home with lances. 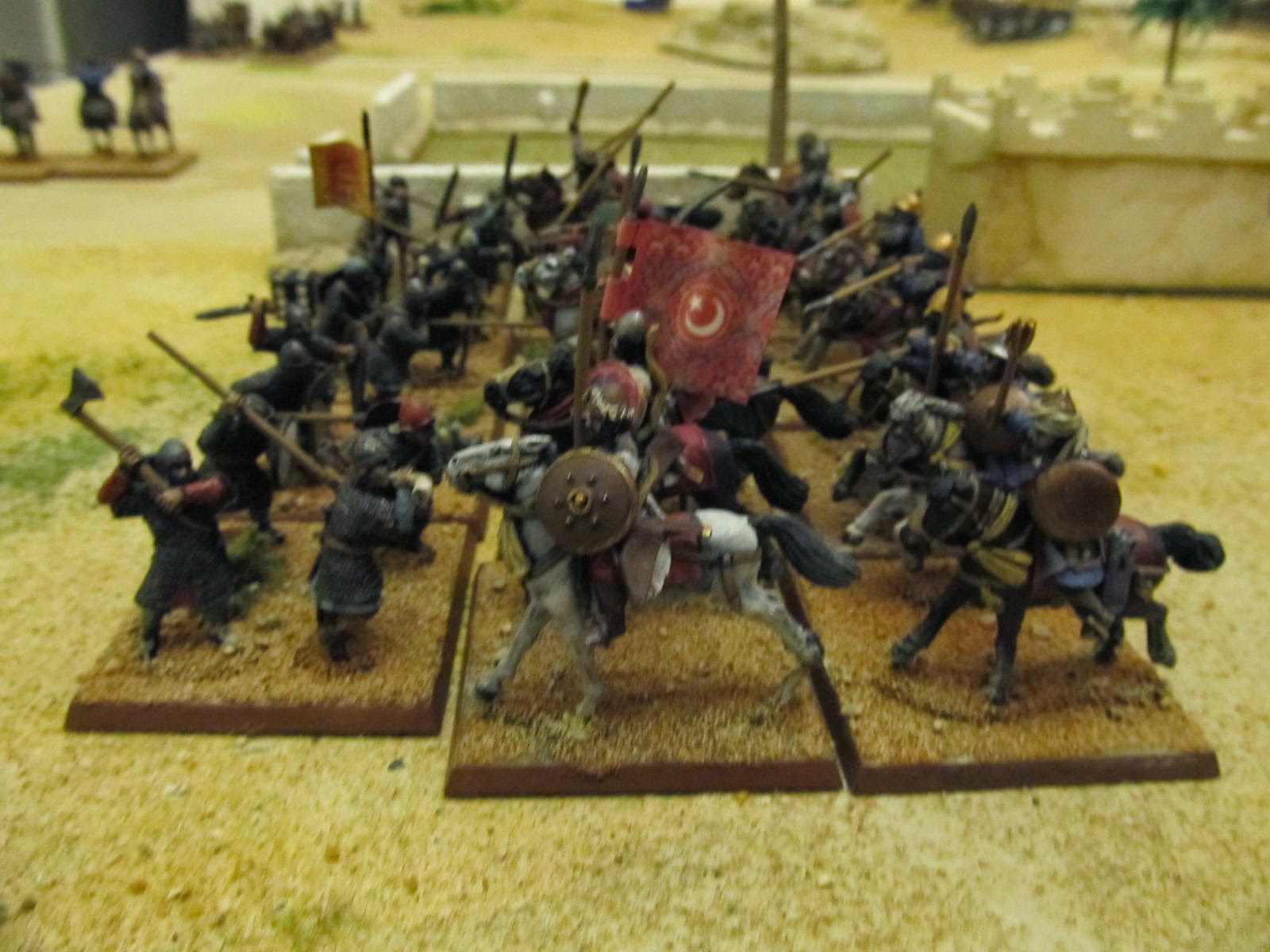 Ghulams support the charge of the Al-Halqa elites as the men-at-arms desperately try to hold their ground. Bitter fighting saw them eventually overrun and routed. 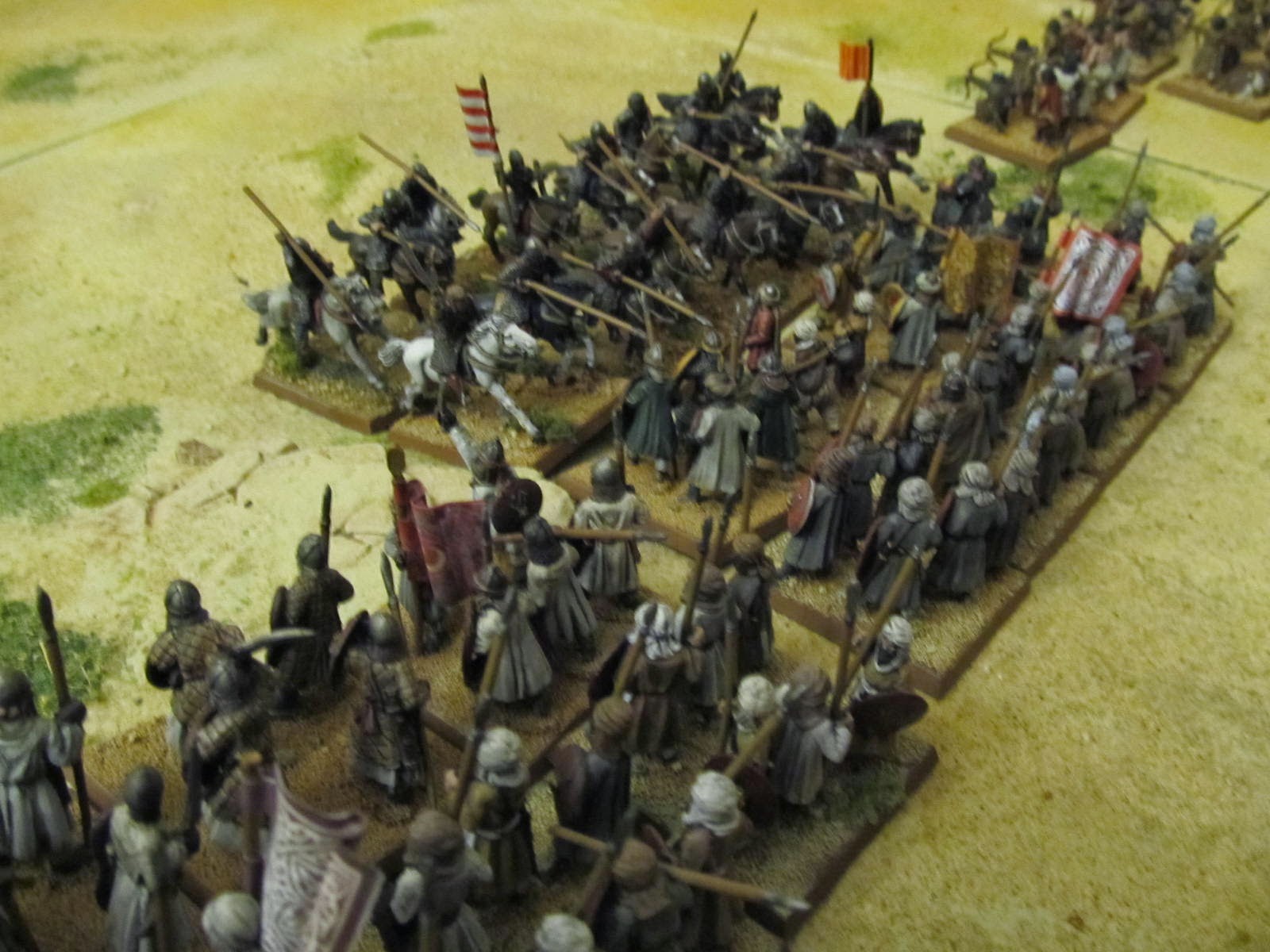 The Crusader's attack in the centre finally strikes home, having take too long to cross the desert under arrow and ballista  fire. Here both units of knights strike the Saracen's front ranks, but their best royal bodyguard infantry held, supported by the 'poor' militia behind. Neither side could could get the upper hand in bitter battle of attrition. But stalemate was good enough.

Meanwhile, the Crusaders right flank collapsed under the massed cavalry attack (but the armed pilgrims fought heroically well, divinely inspired, before being matyred). On the Crusader's left, their steady advance was into an arrow storm, which whittled them away. As they finally got into charge range, the horse archers fell back and peppered them again, and again. Units started to break and that flank collapsed as well, men streaming back to the rear, looking like hedgehogs.

It was a big win for the Saracens. They had held in the centre and smashed the left and right of the Crusaders. The Christian commander conceded defeat with his army on the point of routing altogether, only the presence of true cross kept them figthing at all, and it seemed in imminent danger too with Ghulams now closing in. Saladin had another famous victory over the infidel invaders.