I set myself a little project over the Xmas break, to paint up a few 20mm modern forces for a skirmish game I hope to play this year. I already had the western troops (lovely Wartime miniatures Australians) and ordered a few Elheim Taliban and insurgents for them to face. OK, so it took a bit longer that just the Xmas break to get them painted, but they are all done now and ready for a game.

The game I have planned will be a conversion of the standard BG rules into a one-to-one modern skirmish, but to get away from it being a straight fight (with one side having the obvious advantage of all the good gear) and make it a more a-symetrical game, where winning the fire-fight is the easier bit for western forces, but doing it such a way that they don’t offend public opinion and start to lose the war for ‘hearts and minds’ is the tough bit.

I have some idea for this, mostly using the Battlegroup counters system and by setting the NATO forces two break points, one for their men on the ground fighting (which might be quiet brittle, given that they cannot afford to take many loss, one guy killed is disaster, so wounded guys have to med-evaced or the cost in chits is massive) and a second level for public opinion, so just dropping 500lb laser-guide bombs is a option, but not one that helps much if there are civilians around and it misses.  The point being to set the western forces a tough challenge, even though they have all the big guns at their disposal.

All those big guns will be off-table (as per support Request as per BG), from Apache 40mm cannon strafes, to mortars or artillery, to fast air and those really big bombs. The Insurgents, well they get guys with AK-47s and RPGs, but a far higher breakpoint (they don’t care some much about losses) and they don’t have to worry about public opinion at all, so can blaze away in circumstances, including using civilians as shields.

Hopefully, it’ll create a game in which the asymmetry of the forces of the ground is balanced by the widely different victory conditions of the battle, being far easier to achieve for the insurgents than NATO.  So NATO have to be very careful. Hopefully I get the rules to more accurately reflect actual losses (ie not many) without it being a dull game in which nobody gets hit.

Anyhow, I have the first models complete. I think I’ll add a med-evac Blackhawk helo for the western forces,  because not getting aid to wounded guys will basically cost the NATO forces the game, and a Technical and some civilians (to get in the way) for the insurgents.

Here are the squads so far. 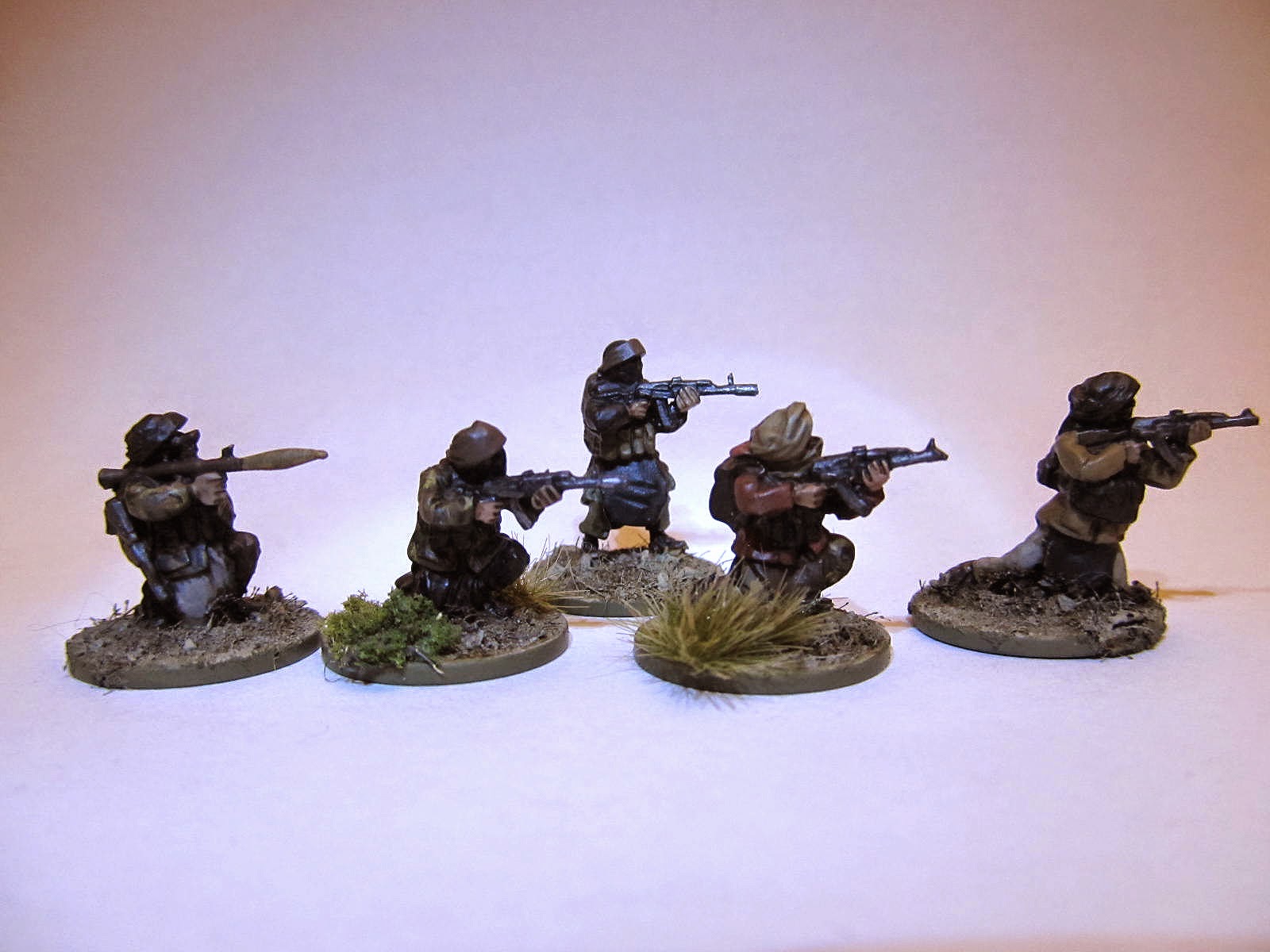 Insurgent squad 1 - with RPG and RPK 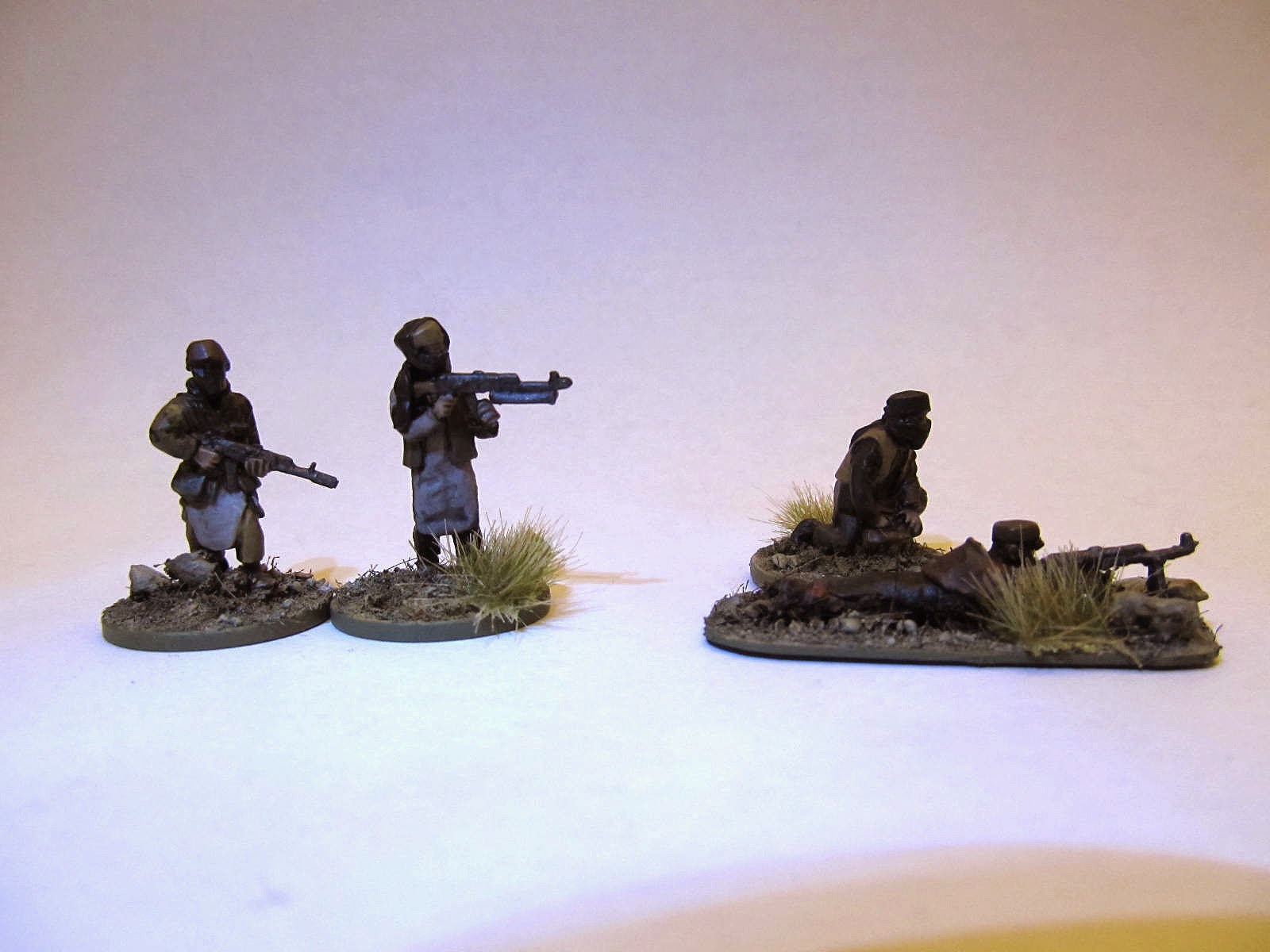 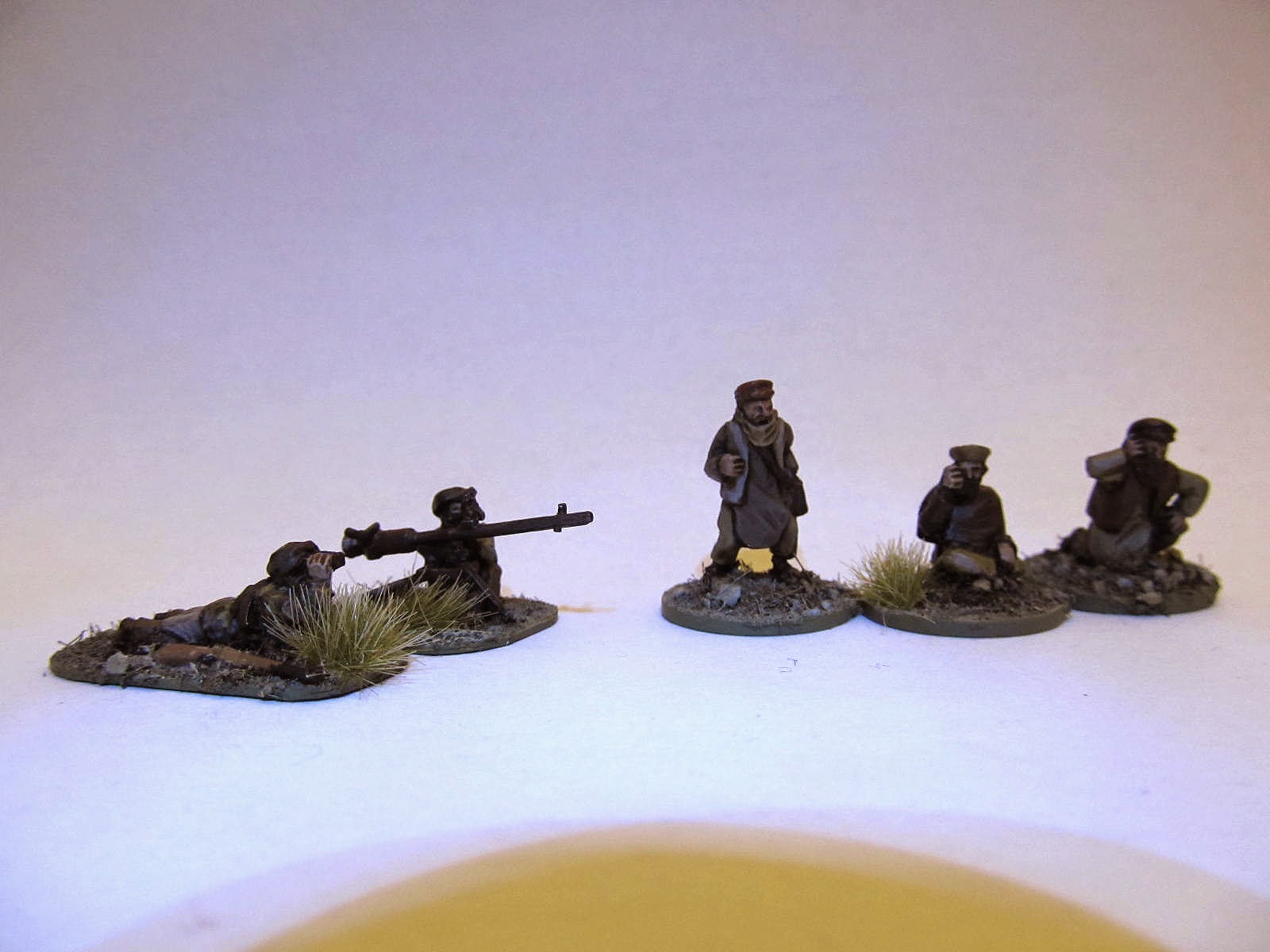 Heavy support team - recoilles rifle and 3 spotters (or are they just civilians?). In the game, getting this wrong would result in heavy loses on the public opinion victory condition, shooting innocents is a big no-no! But then again, maybe they control an IED or is the inurgent force commander. . 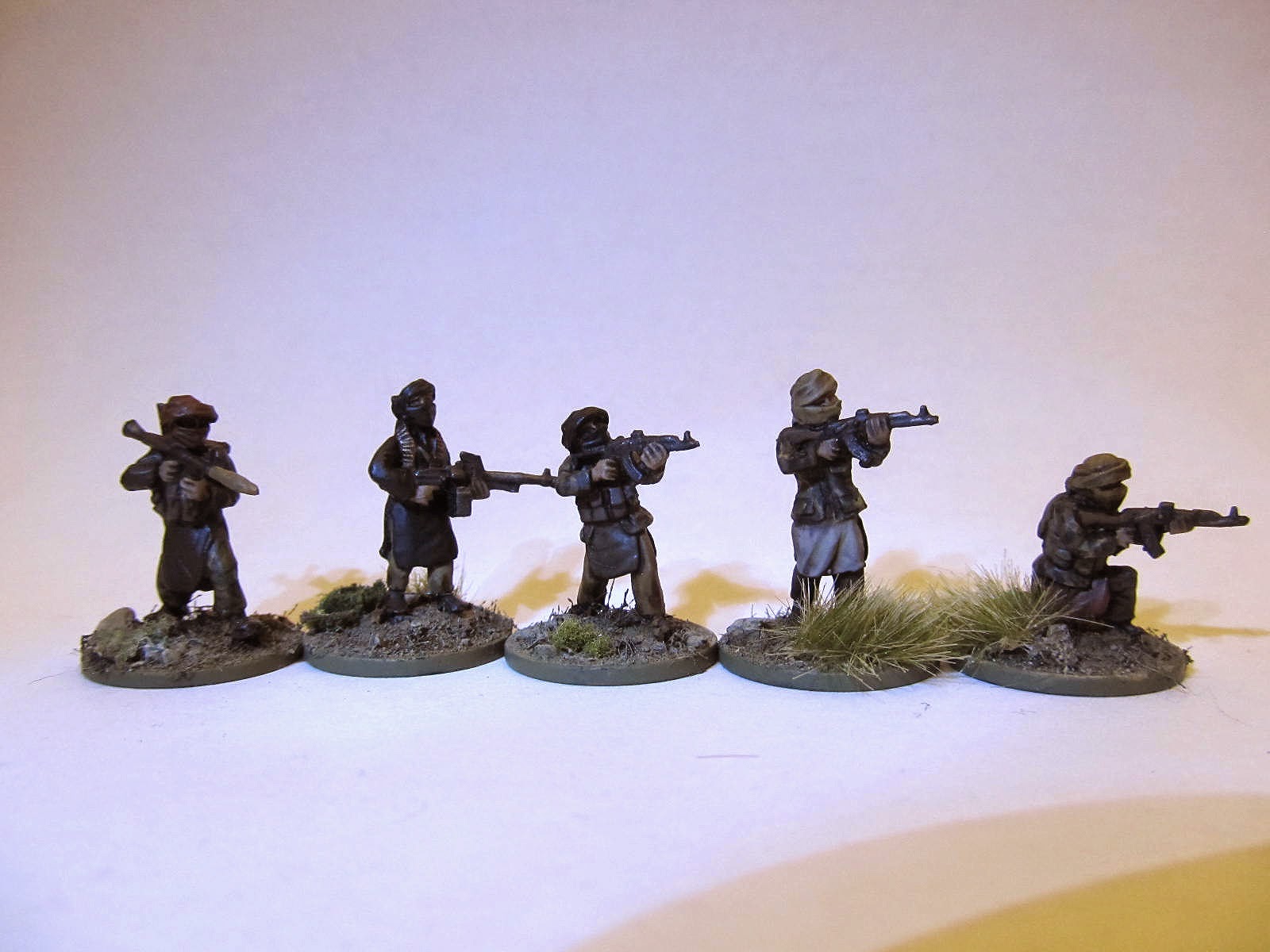 Insurgent squad 2 with, RPG and RPK 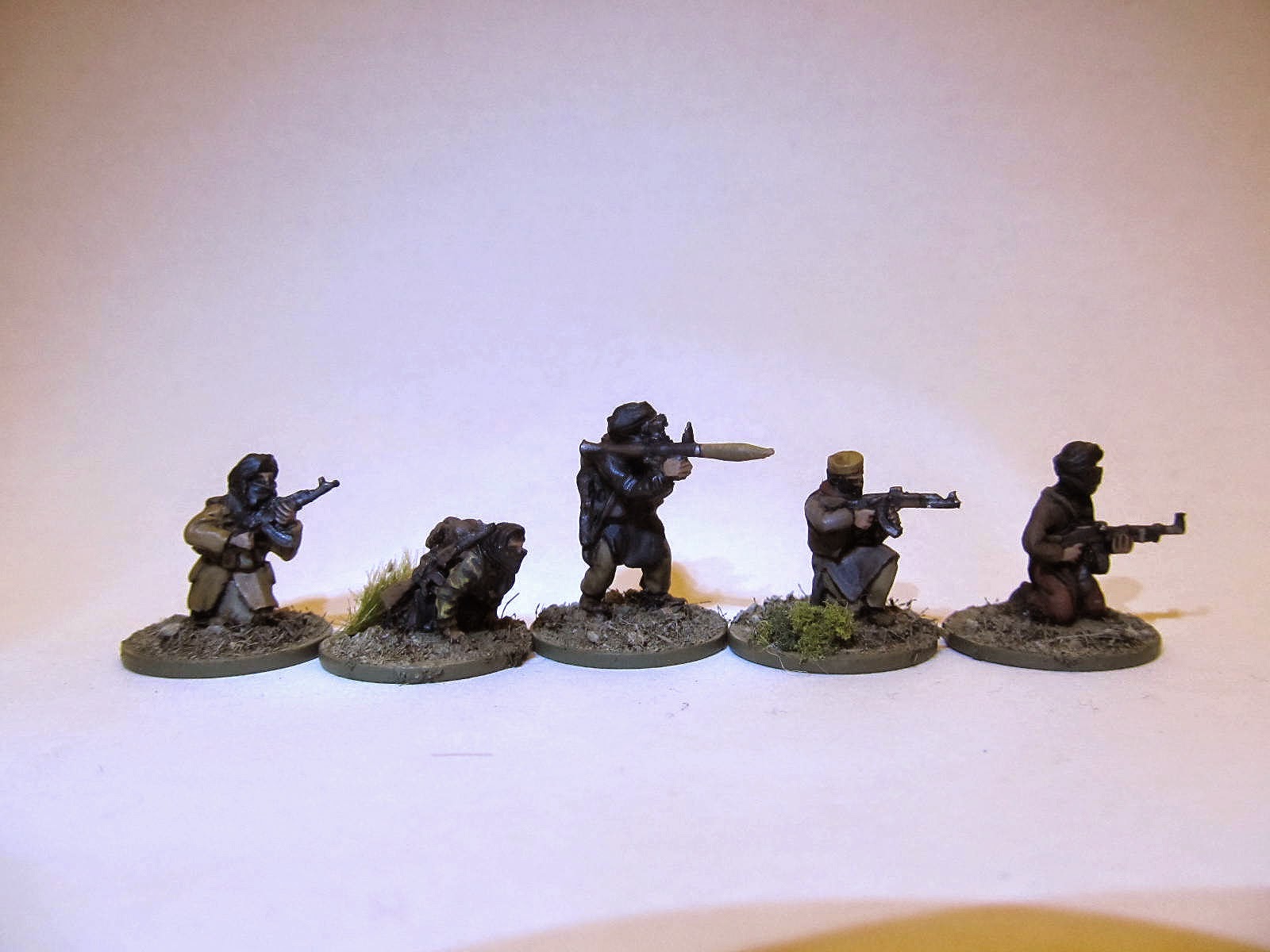 Insurgent squad 3, with RPG and RPK 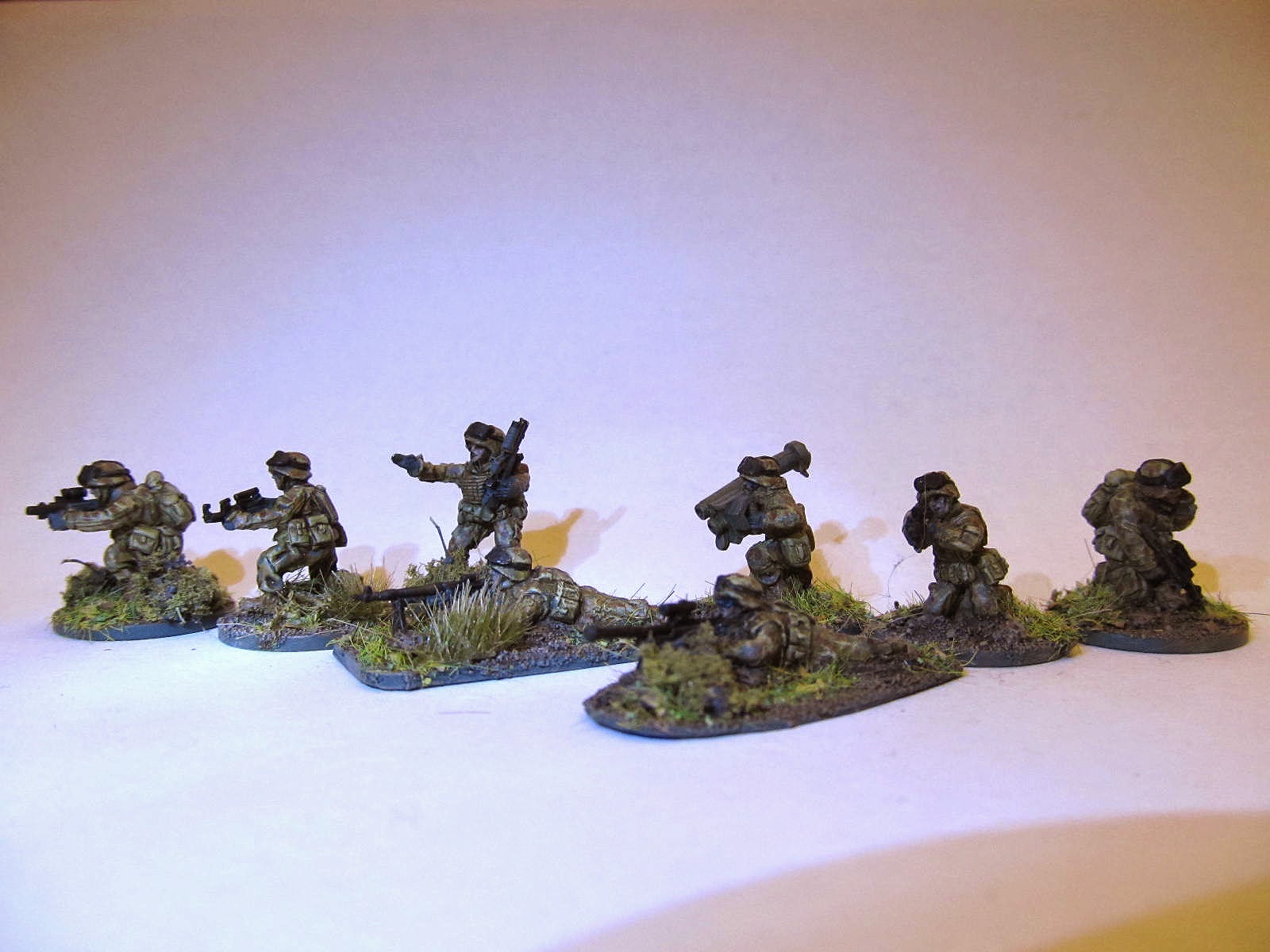 Able squad, with sniper, SAW, guided AT missile, satelite communications uplink and its own officer. 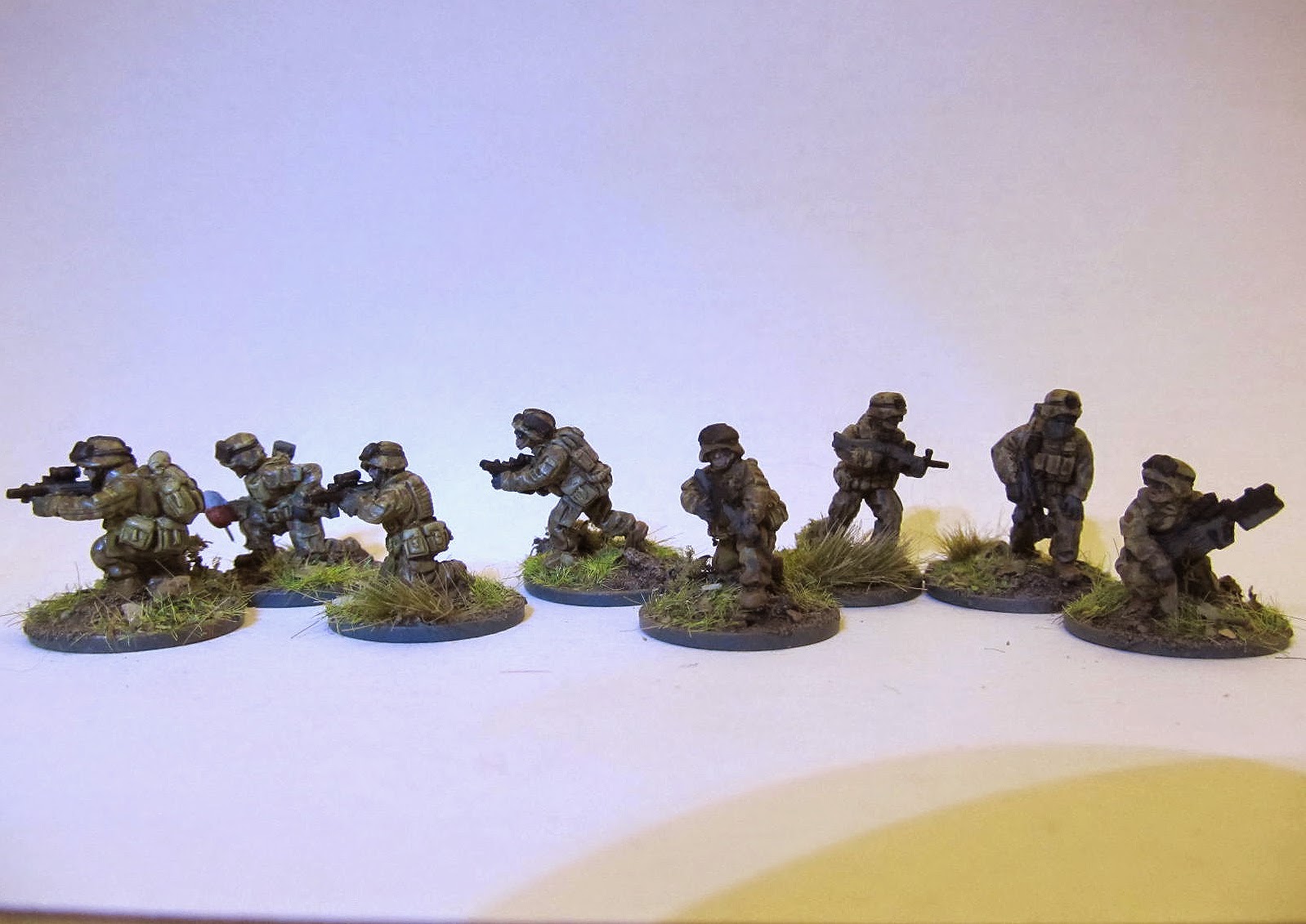 Bravo squad, with SAW, an assault shotgun, sniper rifle, a UGL and a combat medical technician