For quite a while I’ve been quietly toying with the thought of adapting Battlegroup’s WW2 rules into something more modern and more skirmish-like. I’ve had some ideas about designing a game for modern anti-insurgency warfare, using the battle rating counters system to help create a game where the enemy were genuinely hard to find and attack, whilst any losses for the modern ‘western’ forces would be very costly. Basically, a game that was not really a stand-up fight, but one were the enemy was intermingled with civilians, it was hard to differentiate the two and thus difficult to unleash all that modern precision firepower.

The forces would be completely assymetrical. One would have everything, satellite communications, laser guided bombs, tanks and helicopter gunships, etc, and the other would have, well, a few guys with AK-47s and RPGs, the occasional technical buggy and a lot of places to hide.   Standard tabletop wargaming doesn’t generally lend itself very well to this sort of warfare, because, as a battle, games are about killing the enemy. This kind of warfare isn’t. My idea was that the modern ‘western’ forces would have to fight under heavy restrictions, and they would have to be commanded carefully. As well as winning the fire fights, they would have to do it ‘right’, they can’t afford to do too much collateral damage (or lose men and equipment) for fear of losing the war for ‘hearts and minds’, both locally and back home. Thus, despite having the best of everything equipment-wise, they would have to fight with 1 hand behind their backs. No dropping 500lb laser-guided bombs onto the locals!

The intriguing challenge is to make this work as an entertaining set of rules. Rules which basically made it impossible to fight weren’t going to be much good as a entertainment. There would still have to be a fight, just a more even one, where a few casualties to the anti-insurgency forces could mean quickly losing the battle, not on damage inflicted (they would surely be killing far more of the enemy), but on public opinion.

Anyhow, I set-to with the plan of creating a really tricky challenge for the western player, as well as keeping the game’s tension very high, so they genuinely didn’t know what the insurgents had waiting for them – whether than old van was a civilian vehicle full of pensioners on their way to market, or packed with C4, or whether the old man on the mobile phone was calling his wife to ask what was for tea, or reporting a patrol’s position for a surprise mortar strike, etc. The game would have to include civilians as well as the fighting troops. These would be battles fought over people’s homes, and destroying them (or the inhabitants) just wasn’t allowed.

Now, whether it can be done, and still kept as a fun skirmish-level game, I’m not sure. But I have some ideas, many involving Battlegroup’s BR counters (and some different ways of using that mechanic), so I thought it was time to put my copious first notes and BG rules adaptations to the test.

Here are few shots of the first run through. It was a small game, featuring a single 8-man patrol which had to check out a report of suspicious armed-locals gathering at a buildings for a meeting. One idea I’m toying with is having games set at different sizes (small, medium, large) which can restrict access to equipment and support options (so just main battle tanks don’t show up in small games),instead you only get a few guys and maybe the light vehicle they are in, scaling up to something that looks more like a war-fighting army – up to and including an MBT or APC, etc. Alongside this, games would have a threat level, how dangerous the area is or active the local insurgents are. So, a high threat level would mean a larger more dangerous insurgent force and more helpful (to them) locals, but in return for the extra enemy threat, the victory conditions and how much firepower can be used are relaxed too. A single patrol in a unthreatening area can’t just unleash an airstrike, it’s not allowed. But, in the heart of enemy territory, with a active and aggressive foe to fight, then airstrikes, artillery, tanks etc, these can come into play. Small games in high threat areas would include special ops missions, when the SEALS or SAS come into play.

For this first game, a basic (and quick) firefight, it would be small forces with a low threat level, the bottom of the scale.

Here are few shots of the trial game in progress. The 8 man patrol (using my Australians) had to make their way through the buildings to investigate the suspicious gathering (the insurgent player chose which building was the meeting place). The patrol were on foot, with no extra fire support (like mortar/artillery/helicopter gunship fire etc) except for an emergency medical helicopter evacuation  on stand-by (in the form of a Blackhawk – that wouldn’t be fighting, just swooping in to whisk away casualties – one idea being tested was that casualties have to moved off the table. Leaving guys lying bleeding out is very bad for the westerners – the insurgents don’t worry about such niceties). 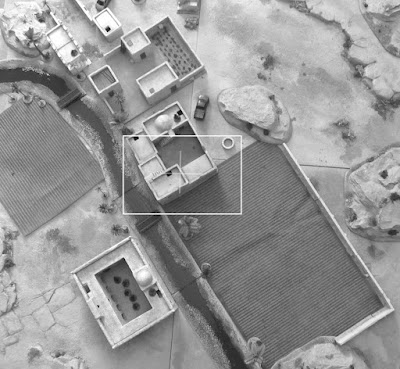 The battlefield (from watching recce drone). Target house is at the bottom (5 gathered insurgents just visible in courtyard). Patrol will be approaching from the top and have to cross the irrigation ditch. 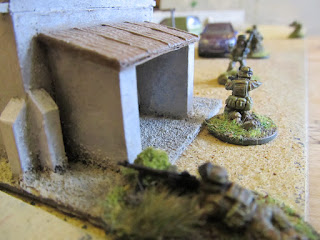 The patrol arrives, well spread out in case of an ambush or IED. Any building could hold an enemy. 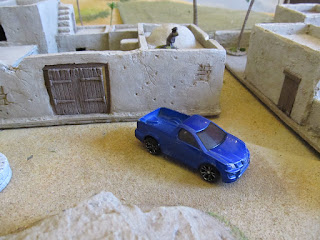 A possible look-out (or innocent inquisitive civilian - hard to tell which, just don't shoot him until you know). 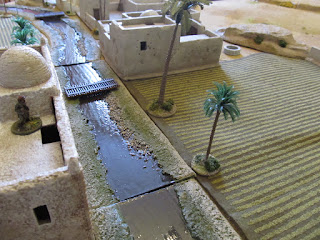 Another possible look-out, no doubt right in the sniper's crosshairs. There was a third too. 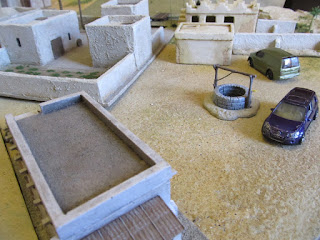 A suspicious parked van, it could have been an IED (but wasn't - phew!). 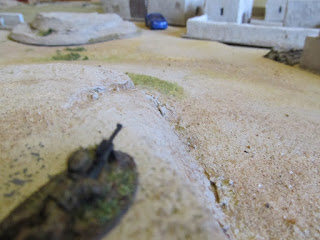 The patrol's sniper, on covering fire behind, watching the buildings as the others moved up.  He just got to lie there all battle. His one clear shot pinned an insurgent behind a wall - must have been close. 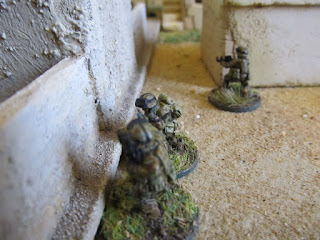 The CO gives the orders, 'cover this alley'. Then led the way forwards with his radio op. 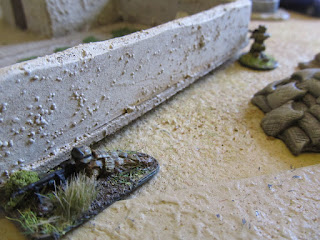 SAW guy and rifleman, got those covers covered. 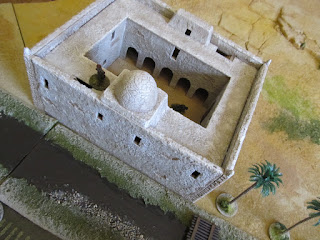 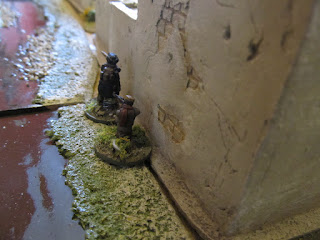 The first insurgents, now warned of the patrol's approach, make their way behind the buildings and along the ditch's bank, well out of sight. 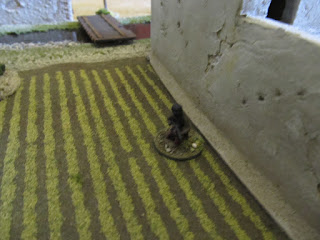 A lone rifleman heads for the corner to cover that approach. 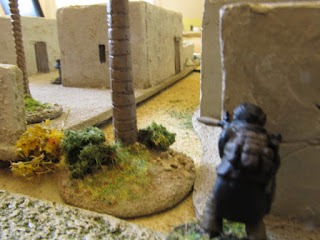 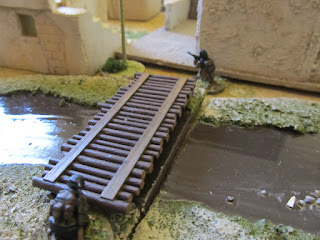 The other foot bridge approach is well covered by insurgents. 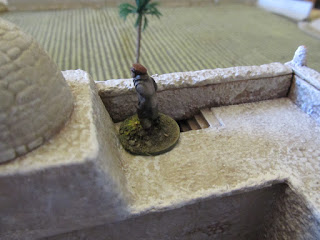 The look-out (actually he was just a civvy, but left in place as a decoy). 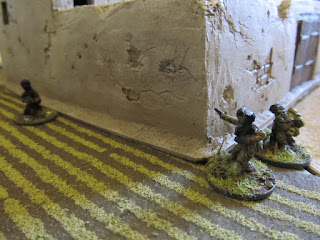 Face to face, the CO peaks around to see an approaching enemy, who then fired a burst and ran back to the other corner. The burst missed the CO, lucky man. 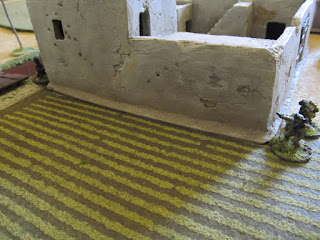 The two face off along the buidling, assault rifles blazing. The insurgent was pinned by the CO's return fire, but not harmed. 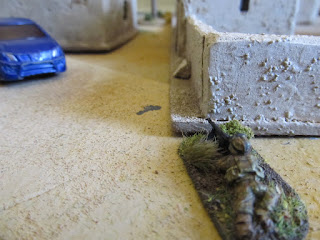 The SAW gunner sits tight, lurking down that alley is the RPG guy, so he was given no peace by a steady stream of bullets. Area fire only pins, but is far easier than aimed fire to hit targets (and a SAW is good at it). 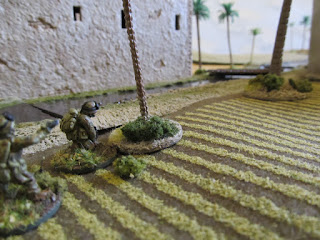 The CO checks his radio op, who ran to get a clear shot at the pinned insurgent, but was hit in doing so. The CO then arrived, rolled for the severity of the wound, and found his mate was OK, saved by his body armour and back in the fight. 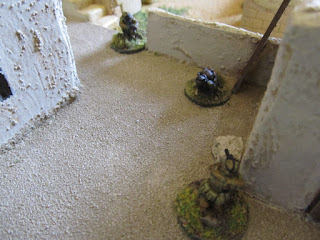 The only insurgent casualty, cornered and shot down in a crossfire at pb range. 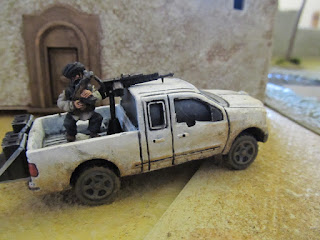 Getting all technical, it never showed up... good job given the patrol had a Javelin missile launcher waiting on overwatch. 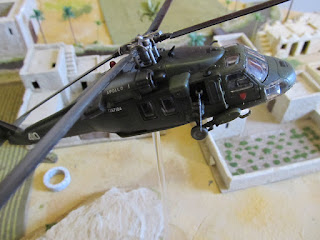 Blackhawk (not down for once), as unrequired med-evac. It was never called upon, so stayed off the table.This shot is just because I just finished painting it.

In all, the insurgents were a 5-man team, including an RPG launcher and a few grenades (all with AK-47s). They also had a local spotter/look-out, but he was disguised as 1 of 3 civilians on the table, and the patrol didn’t know which (if any, they could all just be civilians as a bluff). The insurgent meeting would only be allowed to activate once the look-out spotted the patrol. In support (off table reserve) they had a chance of a technical racing to their aid. The Ozzy patrol was not allowed to open fire (on anything) until it had been fired at first. Until then, all they could do was move (if cautiously) towards the target building.

The patrol was well equipped, it had a SAW, a sniper, a guided anti-tank missile, a satellite radio and was led by an officer (useful for better command and control). All the men also carried extra ammo (useful when ammo rolls came into play – I wanted ammo to be a limited resource – so you need to be careful shooting, or have some form of quick resupply – like a quad bike and trailer). All the men also had advanced body armour (better than just normal body armour). The insurgents don’t get this, and that means they die easier when hit, but it costs them far less morale for their losses, even 1 man down for the patrol would be big problem (hence the Blackhawk on stand-by).

For a first run the game played OK, but with a lot of tweaking as we went, and about two sides of A4 as new notes on what worked, didn’t work, might work, other new ideas and the general pain of having civilians in the way during a battle (that’s going to require a lot of thought, because wargames in which fighting is too difficult don’t really do what it  says on the tin – there was to be some war in this game).

Most pleasingly, after the firefight broke out (the dicker saw the patrol straight away then scarpered - he has only got a pistol), casualties were very low. 1 of the 6 insurgents was severely wounded in the fire fight, the others all escaped (after spending a lot of time pinned) when their BR broke. The patrol lost no-one, despite a big scare when the radio-op went down under AK fire, but when he was checked out (by the officer who heroically ran across the open ground to reach him), he was OK, his body armoured saved him. The guide anti-tank missile was bit overkill in this game, but the Javelin’s only shot missed and landed in the irrigation ditch with no harm done to anyone or anything. The RPG launcher guy only got off one shot, which also missed, before being pinned down by furious SAW fire all game. The SAW gunner tore through his ammo, but his area fire kept that RPG silent.

A game with such low casualties is another aim of the rules. Realistic levels of losses in wargame? (Almost unheard of). It’s very early days, but I shall keep this WIP bubbling away and see if it cooks up something really good (and different enough to current rules) to be worth producing and releasing. Much work has still to be done, but the ideas behind the game are sound (I think).