It's been the summer holidays, so not much time for gaming admist the extra days of childcare... but we have played a few games of Outrider (print and play rules for post-apocalypse car wars). The rules have proved a hit so far, with the younger players anyway. I have a few reservations (like, out-and-out speed seems to count for little compared to mobility and armour, which means be slow and heavy over plain old fast). Fast cars generally fail their manoeuvre tests more often and thus aren't in the right position to fire as often, and the armoured beasts seem to resist fire so well it takes a lot of shooting to destroy them. So it's a double-whammy, you final get your faster cars into positon to fire, and it bounces off! Not sure the game has the balance quite right (imho), but we will fix it with a few house rules.

The basics are good though, and I like the manoeuvre cards and path they make. Making the cards did take about 6 hours though. In all, the 'free' online game cost about £15 in printing and mounting card... I think I'd rather pay £20/25 and just buy it.

Anyway, here are a few shots of one game in action, my outlaws vs the 'green machine' mercenaries. We are also working on (well thinking about) a simple campaign system for upgrading cars and drivers with experience, and seeing destroyed vehicles re-appear as re-worked battle damaged versions. For now we are just mastering the basics of movement and firing. It scratched the Mad Max itch anyway. 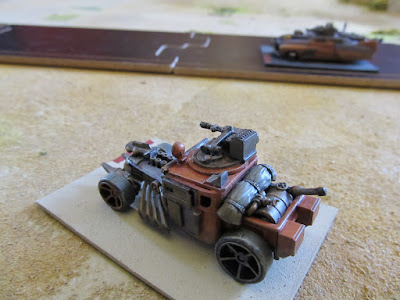 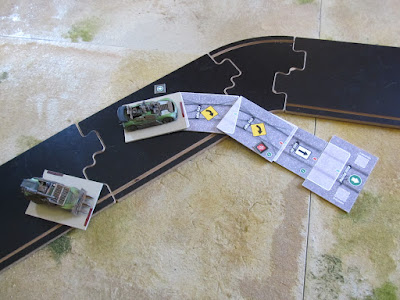 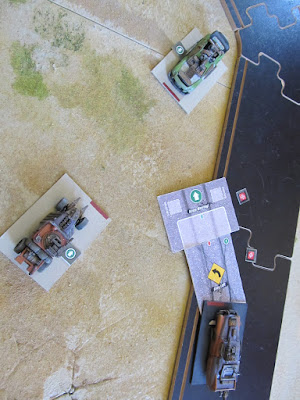 A short move, very easy to control. Red counters mark cards you will also shoot on, up to three playable in a turn. 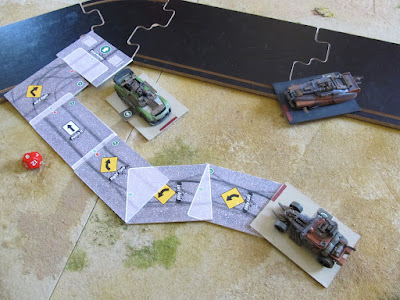 A complex manoeuvre path, but my buggy is good at control. Failure would most likely mean the path ends prematurely on a card before the last one. The D12 (the best dice in the game) is rolled for the overall path's target number, for the highly-mobile (but fragile) dune buggy. 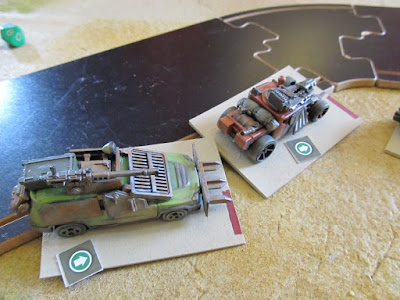 The armoured van makes a rear-end shunt with its ram.  Green arrows mark the vehicles that are in motion. No green arrow, then you are currently stationary (an easier target, but you can then reverse). 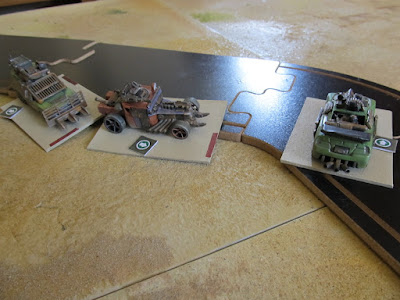 My buggy, in trouble between both the enemy cars. His wingman turned out to a be slow trundler and couldn't keep up. 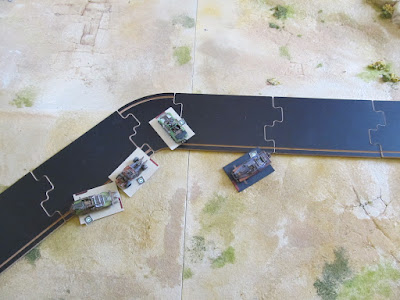 The helicopter view. The black base on my car means the vehicle is a 'roadster' (a house rule), far better when on a road than in the desert. 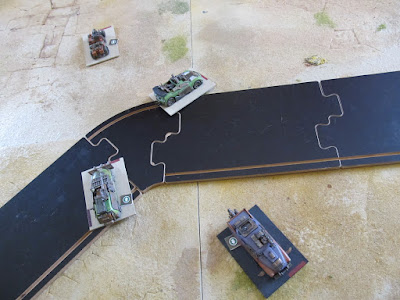 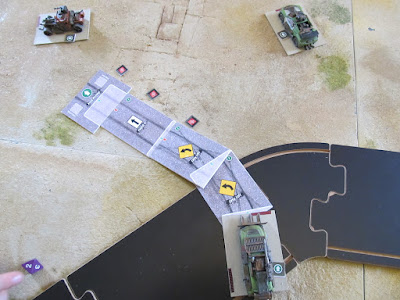 The buggy having swerved away, the van refuses to be shaken, a maximum three shots this turn from its big cannon saw the buggy pounded and wrecked. 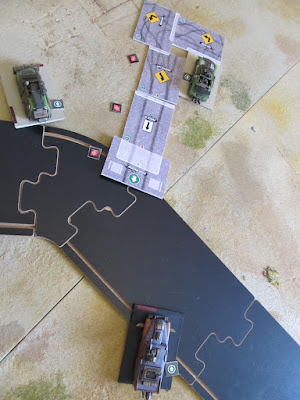 Pulling a U-turn to go head-to-head with my last car, guns blazing (and missing), but I won that duel, but could not then face down the armoured beast that is the van - so I fled the board and conceded the day, caution being the better part of valour and all that... and I had only 1 damage point left.

The cars are all scratch-conversions using the bits-box, large amounts of superglue and Hotwheels toys, mounted on car bases (they are important in the rules). Next time, we'll give the cops a run out.