This is an AAR from my Soldiers of God game, played at Stafford Games last weekend (on the last day before it closes to move to new premises) against Andy Tutton. Andy opted to take command of the Saracens, so I had the Crusaders. We both picked our forces and battle plans for a large field battle. I chose to ‘Hold the Line’, making a solid line of infantry and archers, but turning my right battle into a potent counter-attack force of mounted Knights and Holy Orders. I wouldn’t just stand there and hope to take it. I planned a powerful counter-charge when the Muslims got close enough and so would choose to ‘Hold’ a Charge! card when I got one, so I would definitely have one when I needed it. Alternatively, if I got the right card with the 'change battle plan' special event, I’d change battle plan and switch to the right eschelon attack, to better unleash my combat power.

Andy would ‘Hold and Harass’, another very defensive plan. He’d be harassing on the left and right with horse archers backed by his Ghulam, with a solid mass of infantry standing their ground in the centre. So, it would be a very cautious fight for both sides to start with. Neither was in any hurry to get stuck in. (Sorry about that to the slightly confused observers, wondering why so little was happening early on, but in SoG the tempo of the battle can change, and we started in slow, things got a lot hotter after a few slow turns, but SoG isn't usually a rush to middle of the table to slog it out).


Here are the two forces, as best I remember them.

Here is the tabletop, before deployment, but its got the main moves of the battle marked on it. 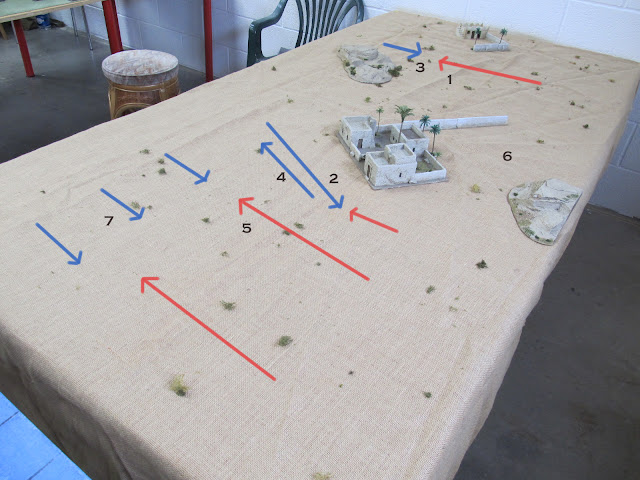 1. A very gradual advance by the Muslim right, Andy’s mistake was not having his light cavalry in open order to start with, so they weren’t skirmishers, so they couldn’t make use of the 'Advance, Loose! and Retire' card they automatically had each turn. He had to wait for a 'Manoeuvre' card to open up those formations and then start skirmishing, when they would then become much more dangerous to me.

2. From my centre I sent out a party of crossbows and archers in open formation, to pepper the static Saracen lines. I hoped to do some damage, provoke an attack and then run away as fast as I could – still it was a risky (suicidal) mission, but my firepower would have to be dealt with, the Saracens couldn’t just ignore them or his cavalry would risk being routed. I also wanted to be able to make use of any 'skirmishers only' cards I drew. With no skirmish units at all, these cards are often a bit wasted.

3. The Saracen advance on the right gets too close and I opted for an impromptu counter-charge rather than be repeatedly attacked by horse archer arrows I can do little about. The dismounted knights rushed in and set-to on the day’s hard work, namely killing horse archers. They immediately attracted a lot of attention from the other Saracens units too, until they were fighting 4 enemy units alone. But their Battle Plan’s 'Rally' card kept them going well beyond when lesser men would have routed, they were an immoveable object all game (I rolled well for them too). Eventually, the men-at-arms arrived to help out, and my infantry started to get the upper hand in the melee. One horse archer and one Ghulam unit were routed. Despite looking weak (especially after all the supporting 'levy' armed pilgrims deserted on special events – cowards!), my left was holding and even winning, but it was a tough old struggle demanding a lot of cards from both players.

4. After a prolonged and intense archery exchange, both players spending a lot more cards to keep their units in the fight, the Saracen cavalry charged forwards. I lost my crossbow unit in the fight, but the archers fled back towards their own lines, loosing arrows as they went. The enemy cavalry follow, and caught them again, but when the archers withdrew from the melee again (probably my mistake to let the horse archers shoot at them again) the horsemen’s many arrows overwhelmed the poor archers and saw them routed in a bloody massacre.

5. The horse archers then started to 'Advance, Loose! and Retire' against the waiting lines of knights, inflicting a few points of disorder, which were mostly removed by their battle’s own 'Rally' card. Small beer to these tough guys, for the moment, but I didn’t want to endure their taunts and arrows for too long.

6. The Saracen infantry centre, with no movement cards of its own and too many demands on cards from the left and right wings, just stays in place as their battle plan required. Fine by me, my centre looked a rather thin line compared to that mass and I was happy to wait it out and try to win elsewhere.

7. The decisive moment of the battle. Using my held 'Charge!' card, the knights came forward as one, Templars in the centre, mounted men-at-arms moving into support. Then a second 'Charge!' card and few useful 'gallop' moves saw them all crash home with overwhelming force. Shock impact and lances cause death and havoc. And that’s not all, a third 'Charge!' card in one turn saw another round of melee and the light horse archers were destroyed in bloody massacres, the Ghulam just hung on by Andy throwing away a lot of cards to save them, but the Saracen’s army morale took a beating, suddenly dropping from 14 to 5.  Next turn, there was no let up from the bloodthirsty knights, two more 'Melee' cards from me saw the Ghulams beaten in another bloody massacre and a unit of Arab Tribal cavalry follow. Of six cavalry units in that battle, suddenly only two were left, and both caught in very uneven fights. It mattered not, two turns of bloody ‘shock and awe’ from my knights had broken the Saracen’s will to fight on and the game is over, all their morale value gone... today victory was with the Crusaders.

It’s nice when a plan comes together... for once.

Thanks to Andy, I now know he’s one tough opponent in any game he plays (not just Battlegroup), but still a gent in defeat. He learnt a few things about how to play SoG too, which might be bad for those he plays regularly in Poole.  He also saw the full power of the knightly charge from the wrong side. Horse archers won’t always win the day.

In SoG it’s not all about what you take, it’s how you use it that counts (and the right cards help too). Here are a few pics of the action, although I didn't get many, the game was too tense and required my full attention, so I forgot the camera after a while. 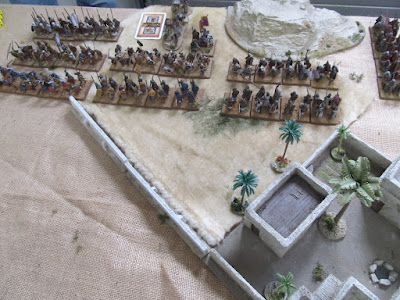 The Saracen infantry centre (had a easy day watching on). Dismounted Ghulam with Sudanese mercenaries in the front rank, Ahdath levy supporting behind, with their baggage train - a very sensible formation. Pressure on your card hand means you just won't be able to do everything, and so the infantry centre was left in peace until ordered to retreat to fight another day. 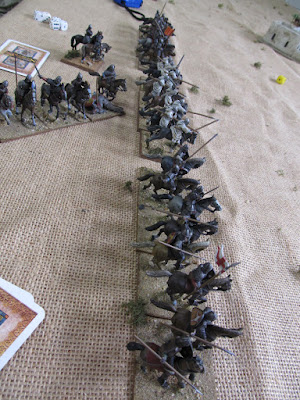 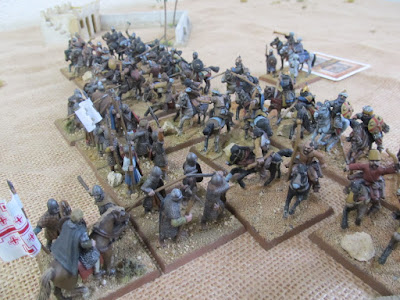 My left battle in a bit of trouble, but holding by the grace of God, a saving 'Rally' card and some good dice.  Dismounted knights supported by their command stand, fight off two units of skirmishing horse archers, each supported by a unit of Ghulam. Eventually, the men-at-arms arrived on their left to help out as well. 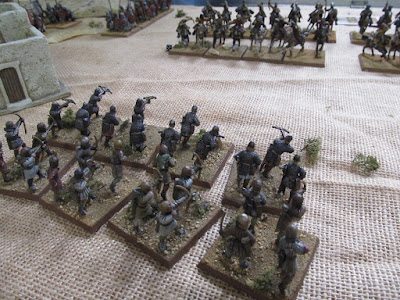 The archers and crossbows boldly sally forward in open order and start to hit the enemy cavalry on their left. The enchange of fire was viscious, until the cavalry got fed-up of the even exchange and charged! Then it was time to run way! The archers almost made it back to my lines, almost, before being massacred! 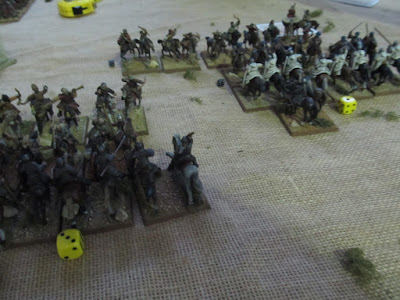 The knight's decisive impact, leaving destruction in their wake. And, in a thunder of hooves, it was suddenly all over...